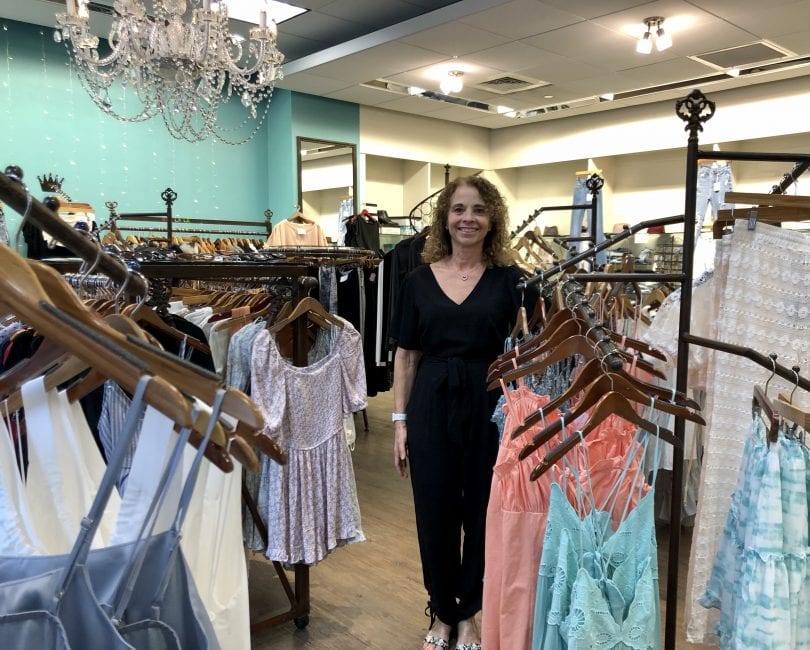 Ooh La La, which opened in West Hartford’s Blue Back Square in 2011, will be closing on June 12. 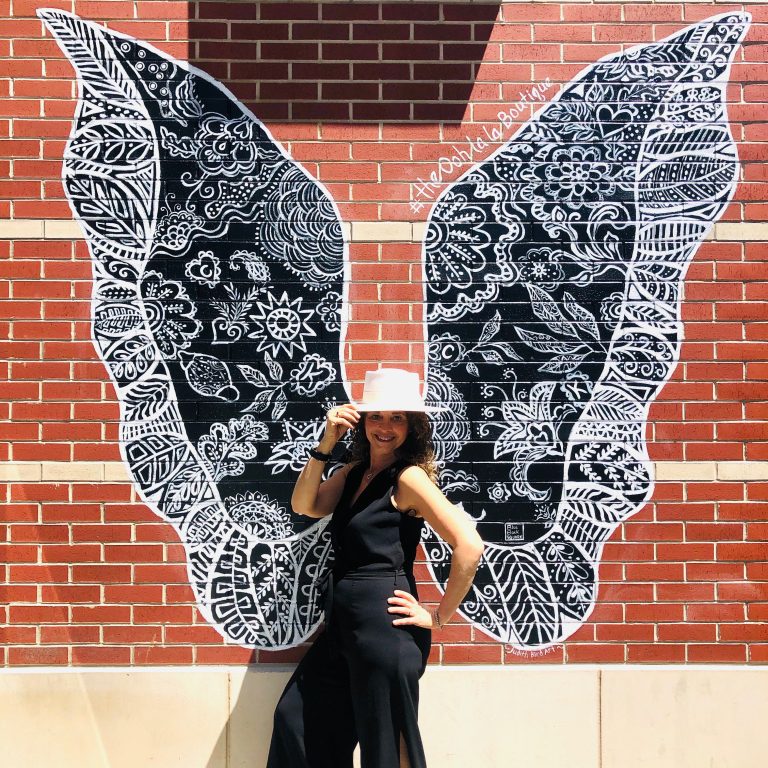 Ooh La La Boutique owner Darlene Salonia stands in front of “The Wings Over West Hartford” when the store move to 55 Isham Rd. in 2020. Courtesy photo

In May 2021 Darlene Salonia was celebrating the 10-year anniversary of opening Ooh La La, the Blue Back Square boutique featuring “affordable and adorable” clothing, but even as customers arrived for a special sale and joined in a Prosecco toast it was somewhat bittersweet because she knew the store would soon be closing.

“It breaks my heart,” Salonia said two weeks later, when she announced the boutique would close permanently on or before June 12.

“I didn’t want to sell the store. It was my ‘love project,'” she said. After spending nearly 30 years working in an advertising and marketing role for the state’s then-fledgling cable industry, she fulfilled her dream by opening Ooh La La on Memorial Road.

“I love to get an idea, and twist it and turn it to make it special,” Salonia said, and that’s what she did with opening the boutique. She wanted to help girls with their body image by empowering them.

“I always wanted to own a business, but I wanted to find something I really liked. I took a leap of faith and just did it,” she said of opening Ooh La La. She stuck to her business plan of keeping the merchandise fresh – only ordering six of an item and not reordering – and stocking a variety of clothing and accessories that would appeal to customers who range in age from teenagers to seniors. 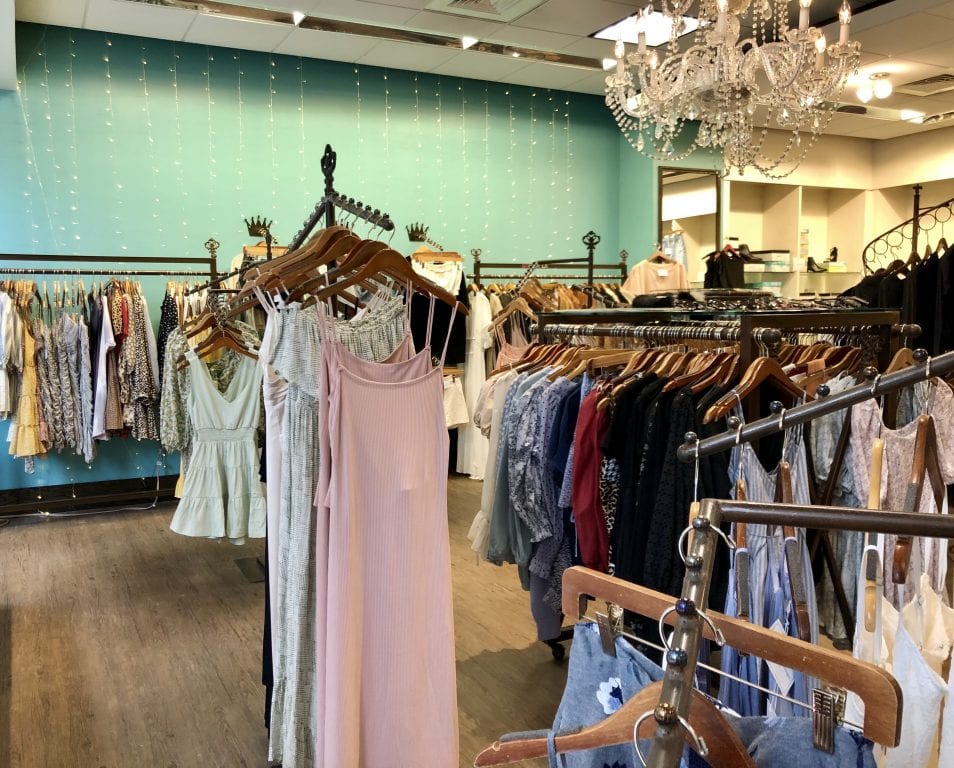 She’s helped dress women and girls for milestones – graduations, birthdays, Bat Mitzvahs, showers. “I’m honored to share in those life events,” Salonia said, knowing that many will always remember what they wore on those big days.

Ooh La La also employed about 60 people over the past 10 years, many of them college students. “I’ve had some of the most amazing women,” she said.

She loved hosting events and supporting fundraising for local nonprofits, like “Sista Soccer” which was an effort of the Division I University of Hartford women’s soccer program to collect used soccer equipment for girls in need.

Ooh La La participated in the Susan G. Komen Foundation’s Pink Party every year it was held in Blue Back Square, and Salonia said it was probably her favorite event because of the strong support group it created, empowering all who were involved.

Getting involved with Miss Connecticut probably led to her “biggest surprise,” Salonia said, and completely changed her perception of pageants. “I was so taken aback by how wonderful these young women were,” she said, recalling Bridget Oei, Miss Connecticut 2018, who owned five patents, was a celebrated Irish step dancer, and was a medical school student.

In the midst of the pandemic, the boutique relocated from Memorial Road to 55 Isham Rd., across the courtyard from the Cheesecake Factory, but despite the storefront being closed for several months, and the less visible location, the business continued to thrive. “This wasn’t a financial decision,” Salonia said of the closing.

One of the things that Salonia said she loved about the Isham location was the large community table, which she planned to use during fundraisers for community organizations she hoped to host post-COVID. 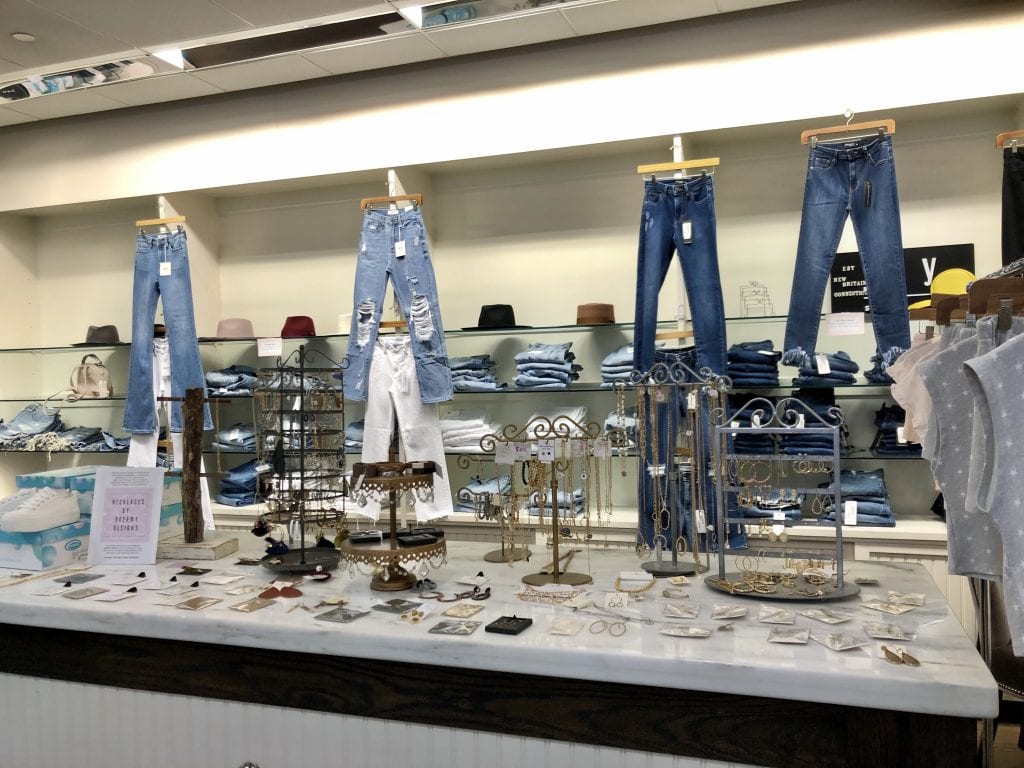 The large community table in Ooh La La, serving as a display table, was intended to be used for community events, which couldn’t take place during the pandemic. Photo credit: Ronni Newton

Instead it was a confluence of factors of factors – in large part because she wanted to remain open for just another year but the landlord, in the midst of Blue Back Square changing hands, wanting a long-term commitment – that led to an inability to come to terms on a new lease. She was determined not to sell the business, and considered moving to another location outside Blue Back or even in another town, but also decided against that. Blue Back Square management, she said, have been wonderful, and she considers them like family and loves the town as well.

“I’ve always loved the strong sense of community that West Hartford has,” she said.

The retail industry has changed a lot in the past 10 years, as has Blue Back Square. While there was e-commerce in 2011, it was nothing like it is now, and back then there were many more retailers in the shopping center that encouraged people to browse. Ooh La La ended up being the lone women’s clothing store.

During the pandemic she ramped up her social media and found different ways to interact with customers, including using FaceTime. She recalled one particular customer who called on a Friday and said her daughter was coming into town and getting married on Sunday. Salonia connected with the daughter via FaceTime and helped her find a dress that she wore a few days later for the small family ceremony.

“There’s a next chapter for me,” said Salonia, who is a master gardener and said she may want to do something related to the outdoors. She’s not quite sure what that will be, but her adult children live in Boston and she’d like to live closer to them.

Businesses like Ooh La La are important to the local economy and the community as a whole, Salonia said.

Even as the business prepared to close, Salonia had a space set aside for merchandise from The Perfect Stitch – dog bandanas that were a fundraiser for the Connecticut Humane Society. She said she wishes she could have done even more to support the community.

Ooh La La will close by June 12 – or earlier if everything is liquidated before then. The entire store is now discounted to 60%, and Salonia is hoping to have a chance to say goodbye to as many of her customers and former employees as possible.