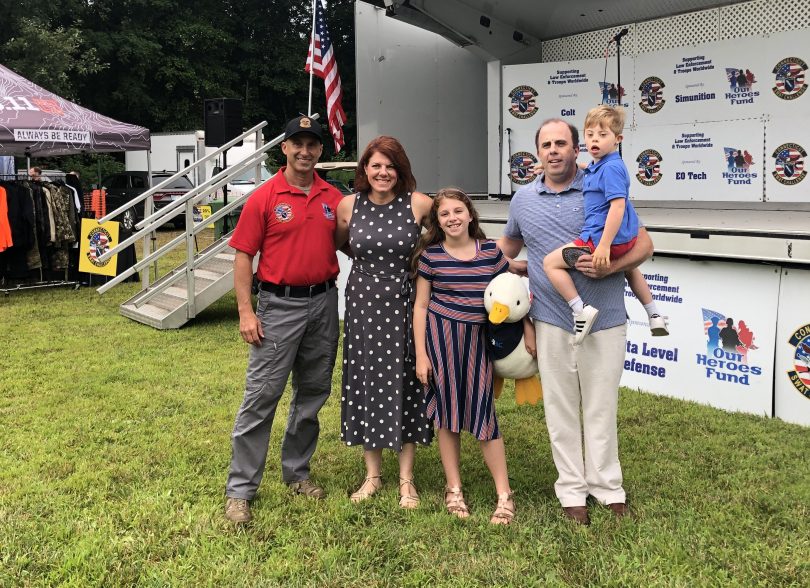 A story about West Hartford’s Finn Daly, and the kindness of his neighbor who built a bench for Finn to watch his flag, has made national news and captured the hearts of people everywhere, including local law enforcement officials. 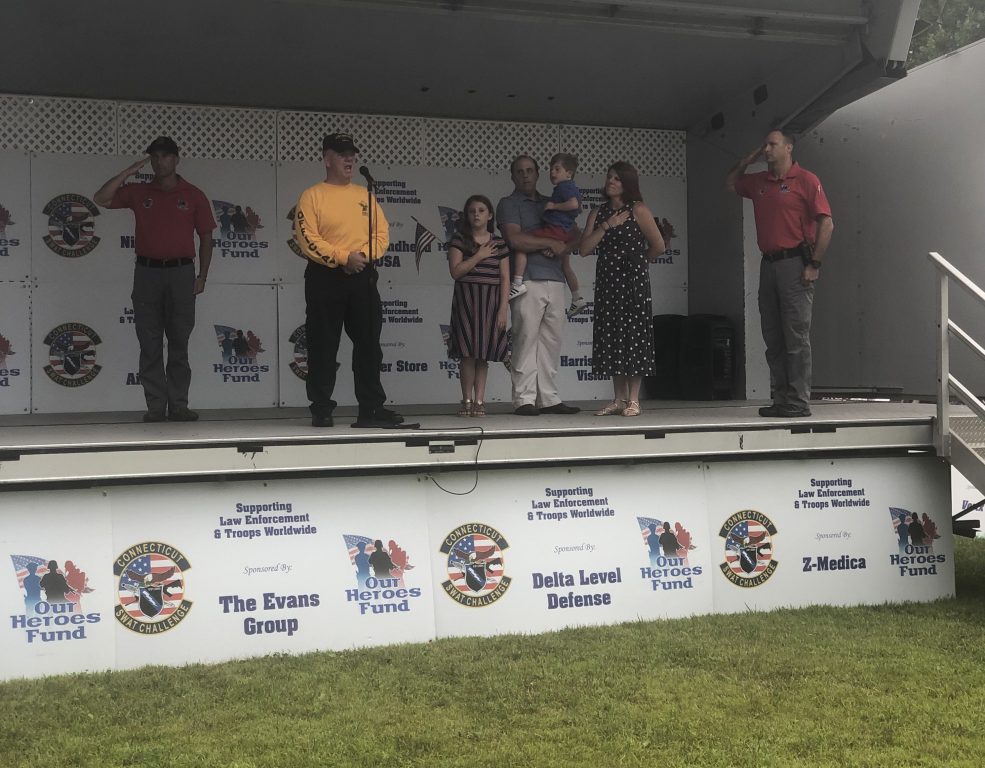 Bright and early on the morning of Wednesday, Aug. 14, organizers of the Connecticut SWAT Challenge welcomed the Daly and Disque families to the Metacon Gun Club/State Police Range in Simsbury so Finn Daly, 6, could present the flag during the National Anthem, officially opening the day’s events. 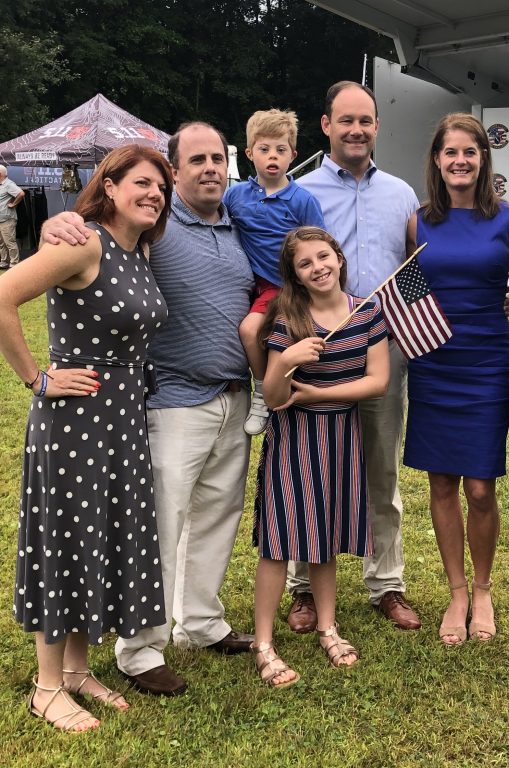 Finn, who lives in West Hartford with his parents, Brooke and Kevin Daly, and his 9-year-old sister, Rosie, has received local, national, and even international attention for his love of the American flag. Finn, who has Down syndrome and autism, has a deep appreciation for the flag, which he often sits and watches, transfixed by its movement for hours at a time.

TV viewers recently were transfixed by Finn’s story, after WFSB aired a story, and then “On The Road with Steve Hartman” reported for CBS Nightly News, about a West Hartford neighbor, Todd Disque, who crafted a personal bench for Finn so that he could sit comfortably when stopping to appreciate the large flag that hangs from a tree in Disque’s front yard. According to Finn’s sister Rosie, her entire family saw the creation of “Finn’s Bench” as a wonderful act of kindness.

“One day my dad was driving and he saw this bench in Mr. Todd’s yard that said ‘Finn’s Bench’ on it. We go for walks a lot around the block, and that is one of Finn’s favorite stops because they have a beautiful flag. So my Dad came home and told us, and we didn’t even believe him until we ran over and saw it, and we thought that it was just really touching,” said Rosie Daly.

Finn’s mother, Brooke Daly, echoed her daughter’s sentiments, saying how happy she is that Finn’s story has since spread to so many people and brought many different groups of people so much joy, particularly local law enforcement members.

“After the story aired on the nightly news, the chief of police in West Hartford showed it to all of the guys in the precinct, which was wonderful, and then one of the lieutenants contacted me and said that they had seen the story about Finn and his love of the flag and all been so touched by it, and that they would love if Finn and the entire family came to the Connecticut Swat Challenge and presented the flag during the opening ceremony, and we were just completely overwhelmed and honored. It’s amazing, the different types of communities that have reached out to us. We have had such a wonderful response from the special needs community as well,” said Brooke Daly.

Finn’s story has even gone international, according to his grandmother, Kathleen Garrity, who said that a soldier currently deployed in Afghanistan has said that he is flying the flag in Finn’s honor, and that he would be sending that flag to Finn upon his return home.

The Connecticut Swat Challenge, which is currently celebrating its 15th year as the nation’s premier tactical competition, is organized in part by Event Director and West Hartford Police Captain Jeremy Clark, who learned about Finn’s story after one of the department’s lieutenants showed him the CBS video. Clark said that Finn’s reaction to the flag is “the best thing ever” and is something that he and his fellow officers very much appreciate and enjoy being able to celebrate.

Todd Disque who was also in attendance at the event, said that for him, the choice to build the bench for Finn was an easy one, and that it has had many wonderful effects, including a new friendship between his family and the Dalys.

“I love my flag, so I put it out and Finn would just like to sit and watch it for 15 to 20 minutes sitting on the sidewalk, and I thought that he needed something better than that to do that, so I had some wood and I built him a bench, it was just that simple … and it was great to meet the Daly family, and now we’re friends with them, so it all worked out,” said Disque. 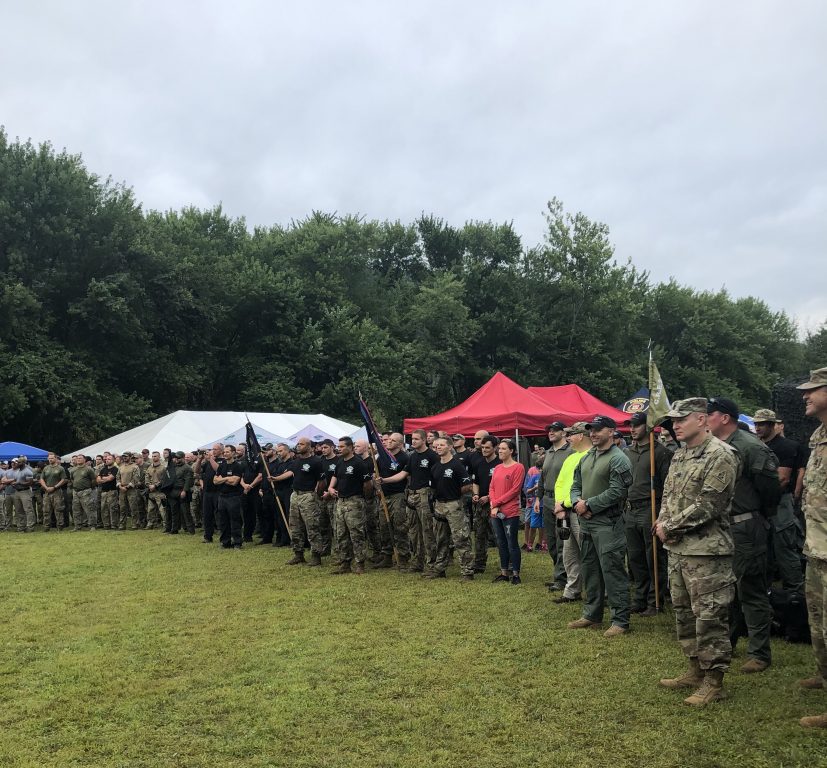