Images from the album included "movie star" photos of Dotty and Andy Laudano in their youth. Courtesy photo

Kathy Colello, owner of Make My Photo Book, created and delivered a photo album for the Laudano family, just in time. 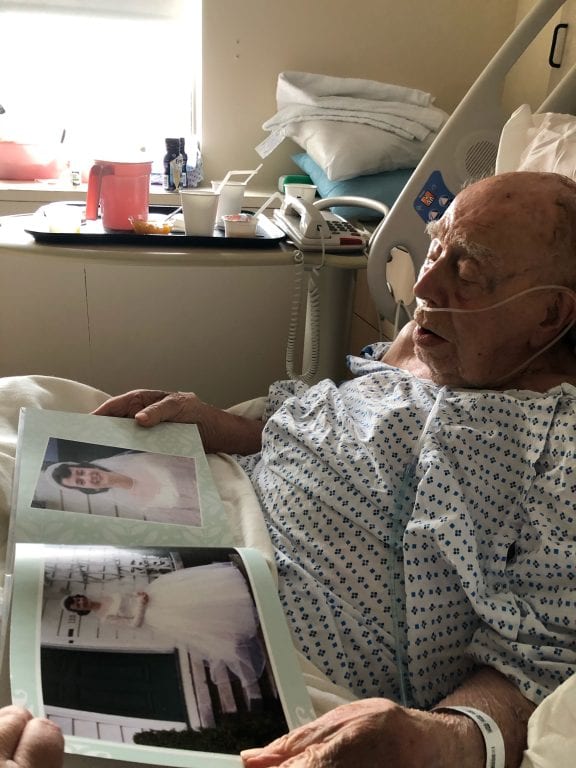 Although he was very ill, Grandpa Laudano had a chance to see the albums that told his life story, remarking about the beautiful photos of his “bride.” Courtesy photo

In the summer, my late sister-in-law’s sister, Mimi Laudano, asked me to create a family album for her parents, Andy and Dotty Laudano, both in their 90s and in assisted living in Hamden.

Mimi originally planned to create the book for Andy for Father’s Day but found the task overwhelming and contacted me for help. The new goal was to get the album to her parents for their anniversary on Nov. 15. The Laudanos – Granny and Grandpa as they’re known in the family – are the sweetest couple imaginable, very humble and kind. They met at St. Raphael’s Hospital in New Haven where he was a doctor and she was a nurse and married in 1952. They had a precious and beautiful life together, raising four children – Aileen, Peter, Mary Ann (Mimi), and Andy – and eventually welcoming six grandchildren and a great grandchild.

In July, I got busy on the album, which, due to the volume of photos, turned into two albums: “The Early Years” and “The Next Generations.” Kids and grandkids all chipped in photos, and the process of organizing and piecing a life together in pictures began: Andy and Dotty’s wedding, their honeymoon, new babies, birthdays, baptisms, Christmases, Disneyland, the trip to Iceland with the grandchildren in 2016. 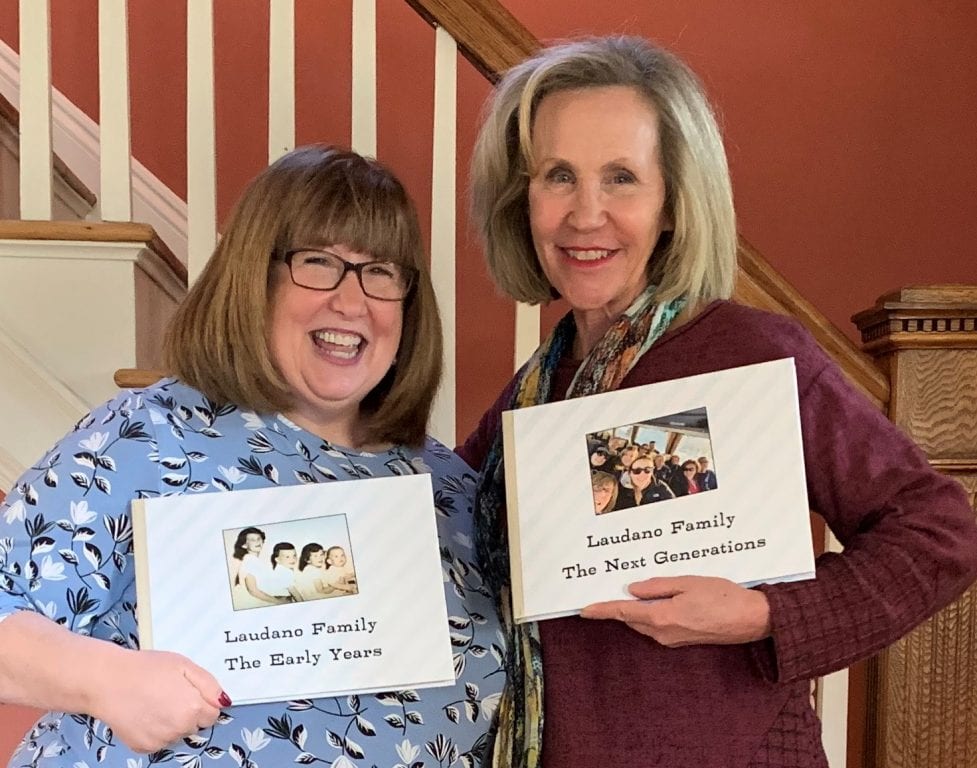 It was so fun to work on this project because much as the Laudanos became my family when my brother married Aileen in 1981, I hadn’t known them during the earlier part of their story. What a joy to see “Granny and Grandpa” by the pool in the early 1950s looking like movie stars!  How heart-wrenching to look at photos of our beloved Aileen, who died of breast cancer four years ago. I cried my way through the poignant images of her as a little girl.

I felt an urgency to finish the books because Granny and Grandpa were, after all, in their 90s and time seemed of the essence. Grandpa was having some health issues, Granny’s dementia was worsening and on top of it all they were in lockdown due to COVID-19, unable, at times, to have any visitors at all. I knew they must be lonely and I thought, what a blessing it would be for them to have these books and be able to relive these special memories.

By September, drafts of the two books were ready for review, and much to my delight, Mimi and her brothers were very pleased. They wanted a few more photos added, and after collecting and incorporating those, I ordered the books on Oct. 22; they arrived two weeks before the anniversary. During this time, however, Grandpa took a turn for the worse and had to be admitted to the hospital. Granny, meanwhile, was assigned to the memory care unit at the assisted living.

In the weeks before Thanksgiving, Grandpa continued to deteriorate, and on Nov. 22, he passed away at St. Raphael’s, just shy of his 97th birthday. His granddaughter, my niece Lauren, called to tell us. She and her brother Joe had visited him the night before, miraculously allowed in despite the two-visitor COVID maximum – Mimi and her brother had been there earlier in the day.

Mimi, Lauren said, had brought the photo albums for Grandpa to see, and he absolutely loved them. He looked at every page, smiling ear to ear. “There’s my bride,” he said when he came upon Dotty in her wedding dress. “Isn’t she beautiful?”

I burst into tears and shouted to my husband, “Grandpa saw the books!” Mark knew exactly what I was talking about, and we cried together.

I’m so exceedingly grateful, and still somewhat amazed, that the Universe allowed Grandpa to see those books and relive the story of his life the day before he died. I can only hope he had those wonderful pictures in his head when he closed his eyes for the last time. 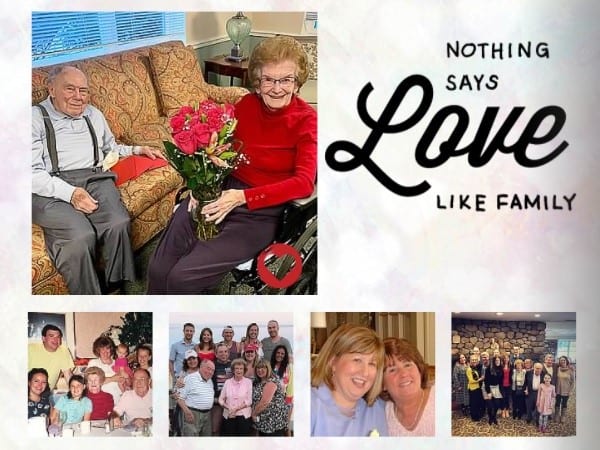 Images included in one of the albums created by Kathy Colello. Courtesy photo