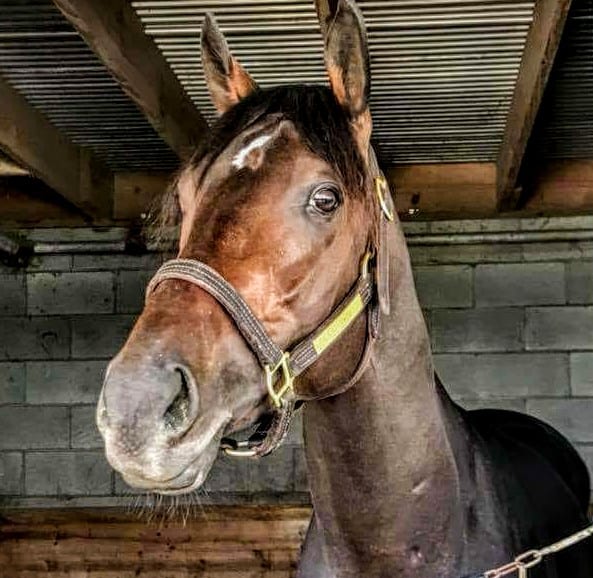 My Boy Jack, who is part-owned by West Hartford resident and business owner Michael Gualtieri, will be running in the Kentucky Derby on May 5, 2018. Courtesy photo

West Hartford resident and business owner Michael Gualtieri and a group of friends bought a horse on a whim eight years ago, and now the group has a horse that will be running in the Kentucky Derby. 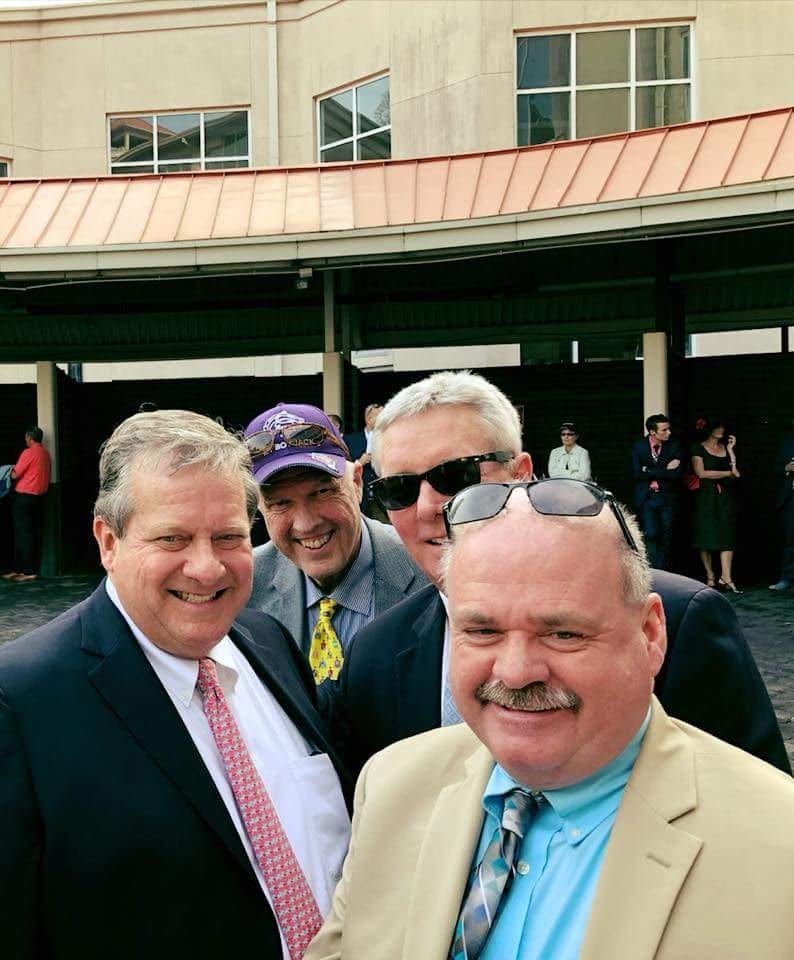 Michael Gualtieri (left) and the group of couriers who own Kentucky Derby horse My Boy Jack. Courtesy photo

When the starting gates open at this year’s Kentucky Derby, a West Hartford businessman, Michael Gualtieri, will be on the edge of his seat at Churchill Downs. His horse, My Boy Jack, will be one of the horses in the 20-horse field.

The story of how Gualtieri, the president of ProCourier in West Hartford, and a group of other transportation industry veterans and long-time friends created Don’t Tell My Wife Stables came to own a horse running in the 2018 Kentucky Derby is a convoluted one. The short version is that for a modest $20,000 yearling purchase, Don’t’ Tell My Wife Stables and Monomoy Stables got themselves a top thoroughbred and ended up in the 2018 Kentucky Derby.

Don’t’ Tell My Wife Stables was a brainchild of Kirk Godby, Rob Slack, and Michael Gualtieri, longtime veterans of the courier industry and all former presidents of the Customized Logistics and Delivery Association and its predecessor the Messenger Courier Association of America. Back in 2010 they were part of a group of longtime friends and courier industry associates who had gathered in New Orleans to attend a board meeting for what was then MCAA.

They had a few hours off, so Kirk Godby, who still serves on the board of the association, told the group he had a life-long friend, Keith Desormeaux, who was a trainer over at the local race track, the Fairgrounds. The group headed over to the track for a day of races, adult beverages, and a back-side tour from Desormeaux.

Nobody won any money that day, but the back-side tour proved to be interesting. For one, Rob Johnstone (then owner of Priority Express) joined the tour and was bitten by a horse. More importantly, the businessmen got a crash course in racing from Desormeaux. Godby (then owner of Corporate Couriers and now co-owner of Flexible WorkForce) had been around the racing game all his life. His dad “Dub” owned a few horses and Godby was a regular at the track. Slack, (now president of Flexible WorkForce) grew up just outside Saratoga and worked at the track as a mutual clerk his junior year of college.

At the end of the tour Desormeaux, said, “You boys ought to put together a few bucks and we’ll buy a horse. I’ll train him and pay all the expenses and then revenue share with a bigger cut of the purse money.”

Everybody went back down to the French Quarter and, as they hopped from bar to bar, the discussion kept coming up about what everyone thought. 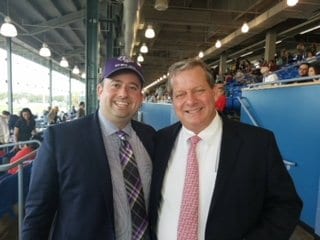 Gualtieri, who is a West Hartford resident as well as owner of West Hartford-based ProCourier, kept the discussion going all night, encouraging the others to take the chance. By the end of the night, the group decided they would all put in $800 and buy a horse.

The name for the stables came from a comment from Gualtieri. After each conference call he’d say: “Whatever we do, please don’t tell my wife. She’ll think I’m crazy.” From there the name of the stable was obvious and “Don’t Tell My Wife Stables” was born. With a pool of $6,400 they told Desormeaux, “Here’s your stake. Let us know when it’s all gone!”

Little did they realize that the trainer, Desormeaux, was one of the most intuitive bloodstock trainers in horse racing. He claimed a horse named Alcazar for $5,000 and Don’t Tell My Wife Stables was off to the races! They all figured they would run Alcazar a few times and have bragging rights in their local bars that they were “Horse owners.” They had no idea what they had started.

Over the next few years those horses had some good successes and the stable bought more. As the wins and the claims to buy their horses started piling up, so did the attention Don’t Tell My Wife Stables was getting from the industry.

Fast forward a couple of years, the group decided to raise more money and have Desormeaux buy yearlings for them, and the group acquired horses that went on to participate in the Breeders Cup and win several graded stakes races.

Don’t Tell My Wife Stables bought six yearlings at the 2016 Keeneland September Sale, and one of them, My Boy Jack, is in the Kentucky Derby.

“It’s the pinnacle of the racing sport,” said Slack. “It’s the most exciting two minutes in sports. I can assure you there will be a group of old friends screaming as loud as they can, running for the roses!”

“It’s been a heck of a ride,” explained Godby. “One day we are a bunch of courier guys and the next day we are getting calls for interviews on radio and TV. It’s crazy.”

And the stable name? “We get asked about that all the time. It’s just as funny today as it was in 2010,” said Gualtieri.

About Don’t Tell My Wife Stables

Don’t Tell My Wife Stables was formed to allow individuals the opportunity to participate in affordable thoroughbred ownership and introduce them to the pageantry, thrills and excitement that thoroughbred racing brings.

It is headquartered in Fort Worth, TX, and has brought over 70 new member owners to the industry. The horses of Don’t Tell My Wife stables compete at racetracks such as Del Mar, Santa Anita Park, Keeneland, Churchill Downs, Fair Grounds, Belmont Park, and Saratoga Race Course.