The ancient and beautiful service of Choral Evensong is presented on the fourth Sunday of selected months at St. John’s in West Hartford, with guest choirs from across the region, and the next event will be Jan. 26 at 5 p.m. 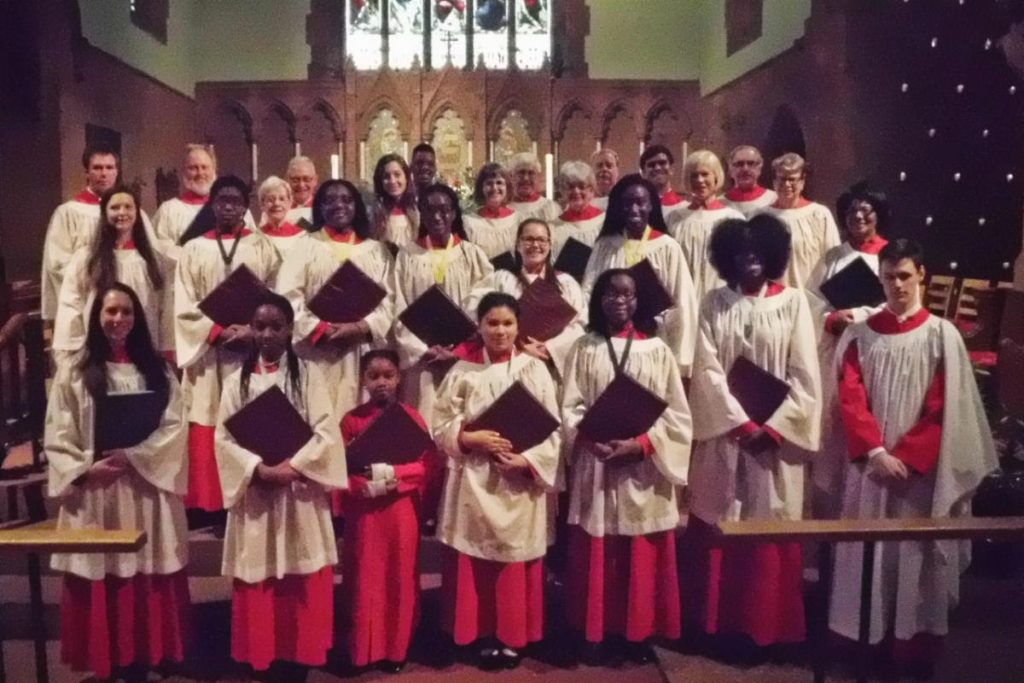 On Sunday, Jan. 26, 2020, at 5 p.m., Music at the Red Door welcomes the public to a service of Choral Evensong at St John’s Episcopal Church, 679 Farmington Ave. (near Prospect), in West Hartford. The service, with a wealth of music for choir and pipe organ, is open to all.

In the ancient and beautiful service of Choral Evensong, which has been observed for more than four centuries in the Anglican tradition, choirs and officiants chant the traditional texts and responses on behalf of the congregation, providing an opportunity for those in attendance to meditate or pray as the music flows about them. The congregation joins in the singing of hymns and certain prayers, while the choir sings the traditional Canticles of Mary (Magnificat) and Simeon (Nunc dimittis).

“Over the centuries, these timeless texts have inspired many composers, and as a result we have a wealth of musical settings of the traditional Evensong service,” said Scott Lamlein, Artistic Director of Music at the Red Door, and Director of Music and Organist for St. John’s. “A visitor to Evensong at St John’s might hear music from the Renaissance, or from the great English cathedral tradition of the 19th century, or by a living composer from the next town over.”

The music for the next service on Sunday, Jan. 26, includes choral settings by English composers Philip Radcliffe (1905-1986) and Herbert Murrill (1909-1952), and by Michelle Horsely, Organist and Minister of Music at South Church in New Britain, CT. The service is framed by music played by Scott Lamlein on the 3,271-pipe Austin organ at St. John’s, opening with the Praeludium by Zoltán Kodály and closing with the sprightly Carillon by Herbert Murrill.

Philip Radcliffe’s music for the Preces and Responses, one of the oldest forms of prayer in Christianity and traditionally sung at morning and evening prayer, has been described as “a gentle and effective setting of great warmth and lyricism.” Herbert Murrill’s setting of the Magnificat and Nunc dimittis, composed while he served in the British Intelligence Corps during World War II, offers a study in contrasts, the Magnificat having “a fiery, relentless quality,” while the Nunc dimittis is “slow and majestic with a rhythmic Gloria.”

Composed in 2019 for the Chancel Choir of South Church, New Britain, and first performed by that ensemble in December, Michelle Horsley’s “Salvation” is highly rhythmic, drawing the listener in with waves of rising and falling vocal lines. (Horsely is also the featured organist in the May 3 edition of Pipes Alive!, the free organ recital series at St. John’s.)

The choral music will be sung by the Choir of Trinity Church, Hartford, and the Choir School of Hartford, both under the direction of choirmaster Jackson Merrill.

“We welcome guest choirs from across the region to provide the choral music at many of St. John’s Evensong services,” added Lamlein. “For some of our visiting choirs, singing a choral Evensong service is a new and inspiring experience. And for all who attend, the opportunity to hear these fine choirs in the beautiful, resonant sanctuary at St. John’s is equally inspiring.”

Choral Evensong at St John’s Episcopal Church is presented on the fourth Sunday of selected months at St. John’s, with choral music presented by the choirs of St. John’s or by guest choirs from across the region. The service, to which all are welcome, lasts 35-45 minutes.

The remaining Evensong services in the 2019-2020 season are as follows:

Each year, Music at the Red Door presents dozens of musical and cultural events, including the Pipes Alive! organ series; choral and chamber music concerts; guest choirs and ensembles; and special events such as the annual Lessons and Carols service and an annual choral concert, Choral Music for the Soul. Visit reddoormusic.org for event details and more information.

Admission is free to all events presented by Music at the Red Door; free-will donations in any amount are accepted at the door.