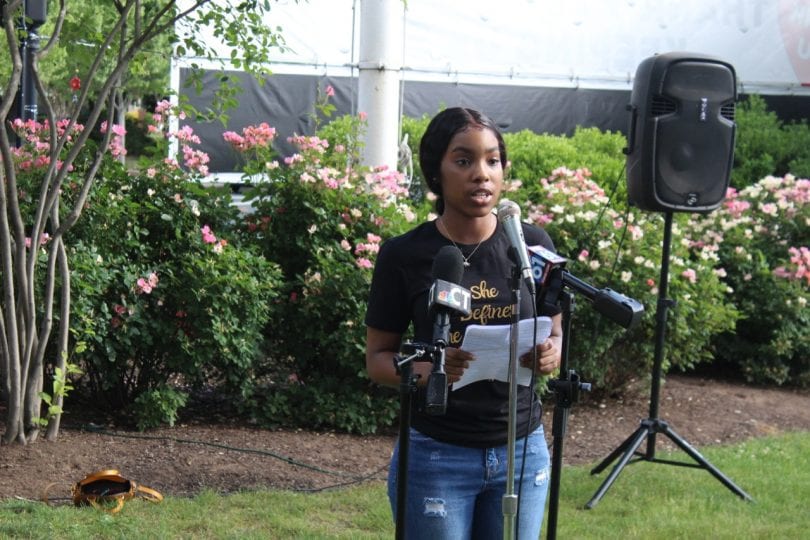 Adrienne Billings-Smith organized West Hartford’s first-ever Juneteenth commemoration, and town leaders said it will be an event that continues. 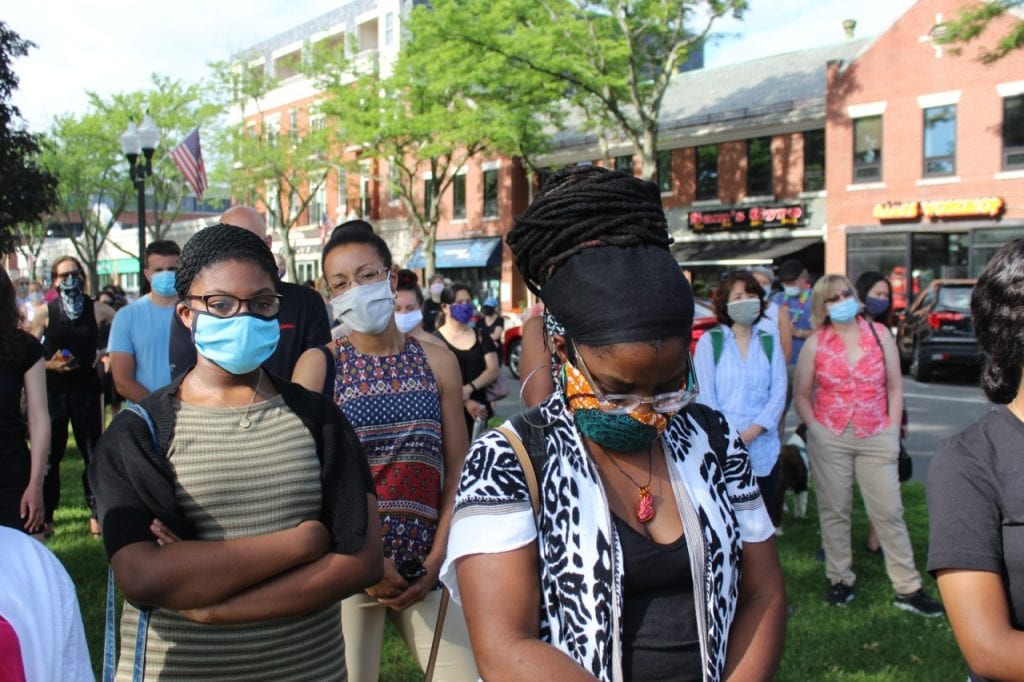 Eshe Griffith, who is about to officially graduate from Conard High School, didn’t have her first course on Black history until she was a senior.

“It shouldn’t take 12 school years for a child to learn their history,” Griffith, who is Black, said. “Because Black history is American history. If they don’t teach it at all, you’re failing to do your job.”

Griffth said she was fortunate, because her mother and others taught her the rich tradition of African kings and queens throughout history and not solely that “Blacks were only the victims of persecution.”

In keeping with that theme, West Hartford’s ceremony on Friday commemorating Juneteenth on the Goodman Green in Town Center served as a celebration of sorts, but more importantly, it was a brief but powerful history lesson that has gone largely and criminally untold in the U.S. The event, which was organized in less than a week, drew several hundred people.

“This commemoration provides a platform for people to understand why this day is important and how hard we must work moving on,” Griffith said. “There is no Independence Day without Black history. In order to celebrate the Fourth of July, you must honor the 19th of June.”

Adrienne Billings-Smith, founder of Concerned Parents of Color of West Hartford, who called for the event to be held, noted  Goodman Green was named for a former slave owner, Timothy Goodman, who donated the land to the town. 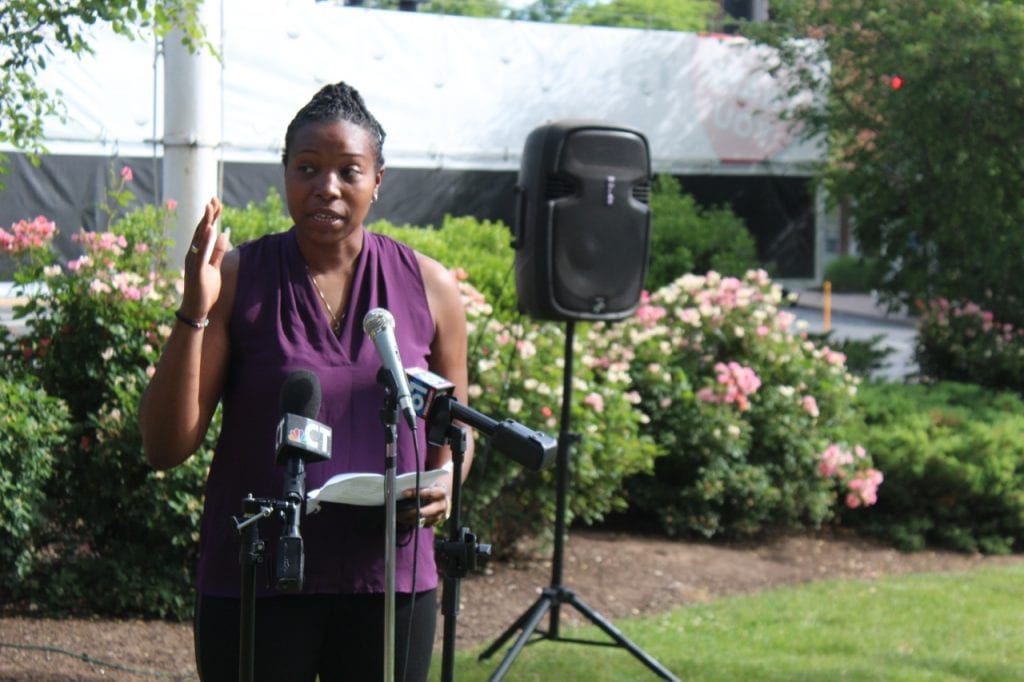 Adrienne Billings-Smith speaks at the West Hartford Juneteenth commemoration that she organized in less than a week. June 19, 2020. Photo credit: Ted Glanzer

“As I sit here on this land donated by a slave owner, I stand here proudly recognizing the lives of our ancestors,” Billings-Smith said. “As a Black queer woman, standing on the very land that was touched by the blood, sweat, and tears of my ancestors, this moment is not lost on me.”

Billings-Smith said the country has done “so much” but a lot has to be done to “forever free our country from its own bondage.”

She acknowledged the day is marked by pain, but also hope.

“From now on we give our ancestors the respect they’re owed, without their resilience, without their love, without their beaten bodies and broken spirits, we would not be standing here on this land paying our respects to them today,” she said. “We still have to recognize the African American experience has been far from the feeling of freedom.” 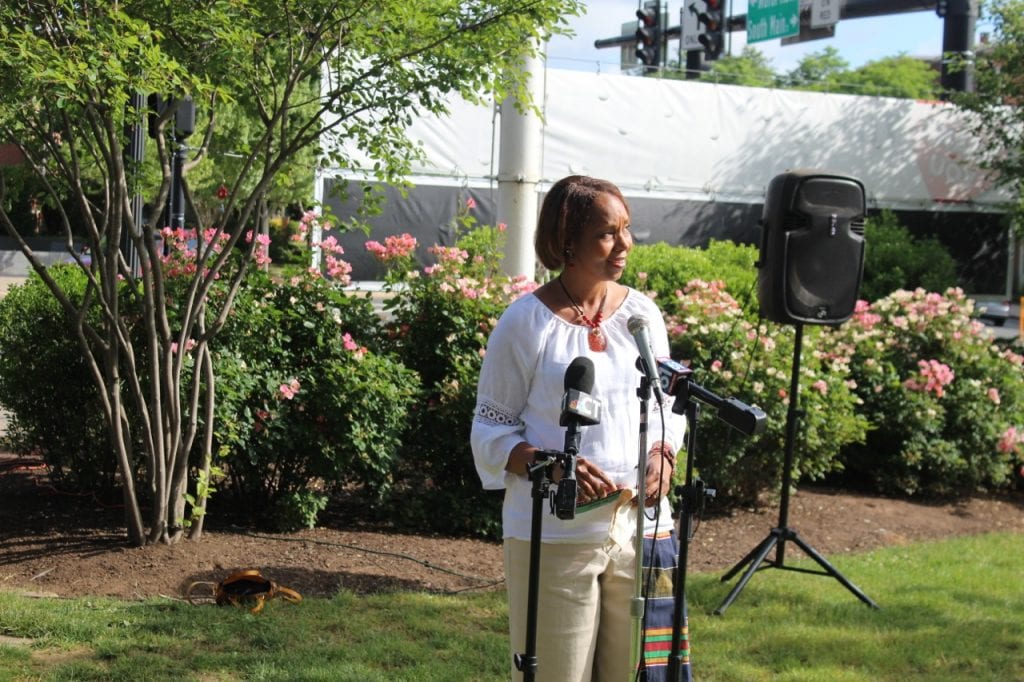 Roszena Haskins, West Hartford Public Schools director of diversity advancement, said the significance of Juneteenth is not just in American freedom, but also on education and achievement.

She noted the Witness Stone Project in the town’s public schools under the auspices of the Noah Webster House, which was introduced in 2018, bears witness to slavery in town. There were 23 people enslaved in West Hartford.

“Black history is U.S. history. Black history is us, too,” Haskins said. “The Witness Stone Project provides an opportunity for our students to transform themselves into young historians. They access church records, wills and account bills, and other primary sources to conduct research on the lives of African descendants who were enslaved in West Hartford, right here on the land we’re standing on today. Our students are scholars, and present their research in a collection of narratives, creative expression, art, essays, poetry. Then the project culminates down the road at Old Center Cemetery with an installation of stones placed for the African men and women who were enslaved right here in West Hartford.”

The project, Haskins said, forces students to uncover the truth of African history, including the oppressions and dehumanization of African ancestors.

“But more importantly, it allows all of us to bear witness to the African strength, resilience, beauty, and contributions to the socioeconomic and political American system,” she said.

Haskins concluded: “No one should ever have to shrink their identity or who they are to make someone else comfortable. We have to be better about building each other up.” 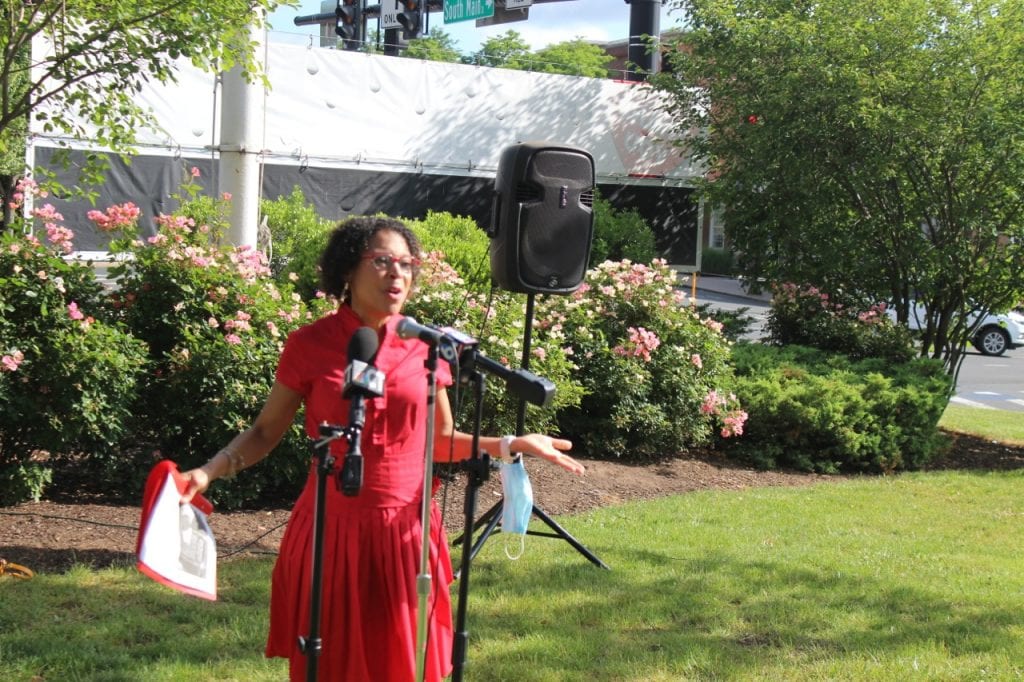 Earlier, State Rep. Tammy Exum provided the history of Juneteenth from materials written by Jameelah Nasheed. Juneteenth, the day on which slaves in Texas were informed they were free, was June 19, 1865, a full two-and-a-half years after Abraham Lincoln signed the Emancipation Proclamation.

But Exum, citing Lincoln’s letter to Horace Greeley, noted Lincoln did not intend to free all slaves, but to preserve the Union.

“What I do about slavery and the colored race, I do because I believe it helps to save the union. and what I forbear, I forbear because I do not believe it would help to save the Union,” Exum quoted Lincoln’s  wrote. “Lincoln viewed his decree as more of a political tool than as a means of liberation.”

Juneteenth, which is recognized by 45 states and Washington, D.C., as a holiday, is not a national holiday.

Its traditions include festivals, parades, picnics, storytelling, and barbecues where red drinks and foods are served to symbolize resilience. 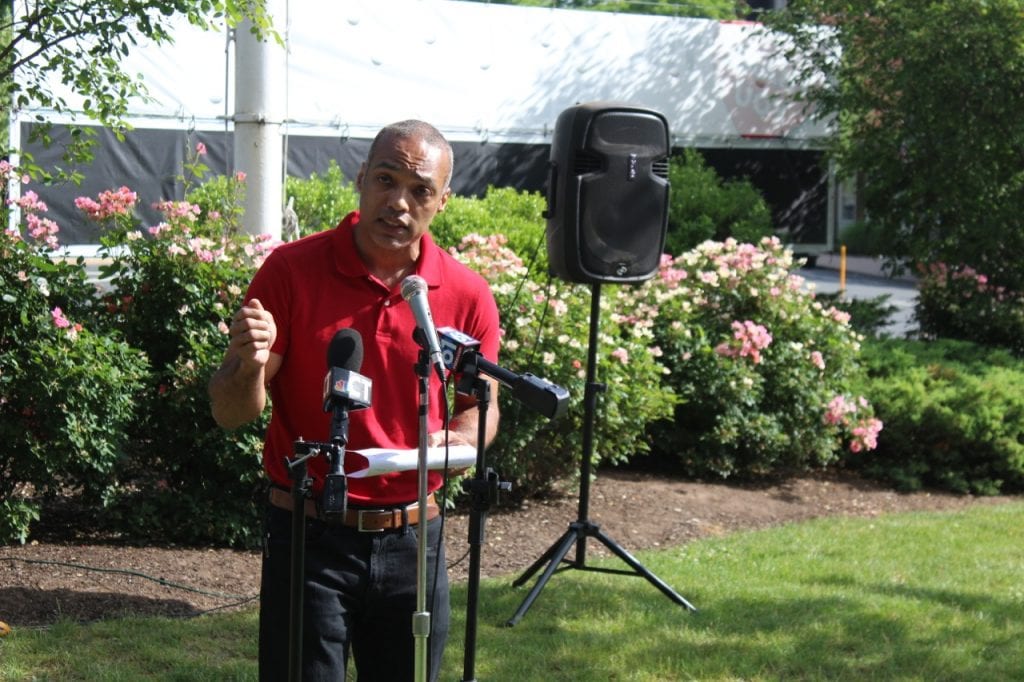 Earl Exum, president of the West Hartford African American Social & Cultural Organization (WHAASCO) and who is also Tammy’s husband, spoke about the agency of enslaved people.

He noted that a rebellion in the Caribbean of people of African descent helped the colonies win the Revolutionary War. Britain, to quell the rebellion, sent troops to the Caribbean to protect a more prized commodity than cotton: sugar.<

Earl Exum also noted a group of slaves who escaped from Georgia to Florida helped Native Americans take over a Spanish fort.

Bringing that agency to West Hartford, Earl Exum said there were at least two enslaved people in town who escaped or tried to escape. One of them, named Bristow – the name of one of the middle schools in town – purchased his freedom, Earl Exum said.< 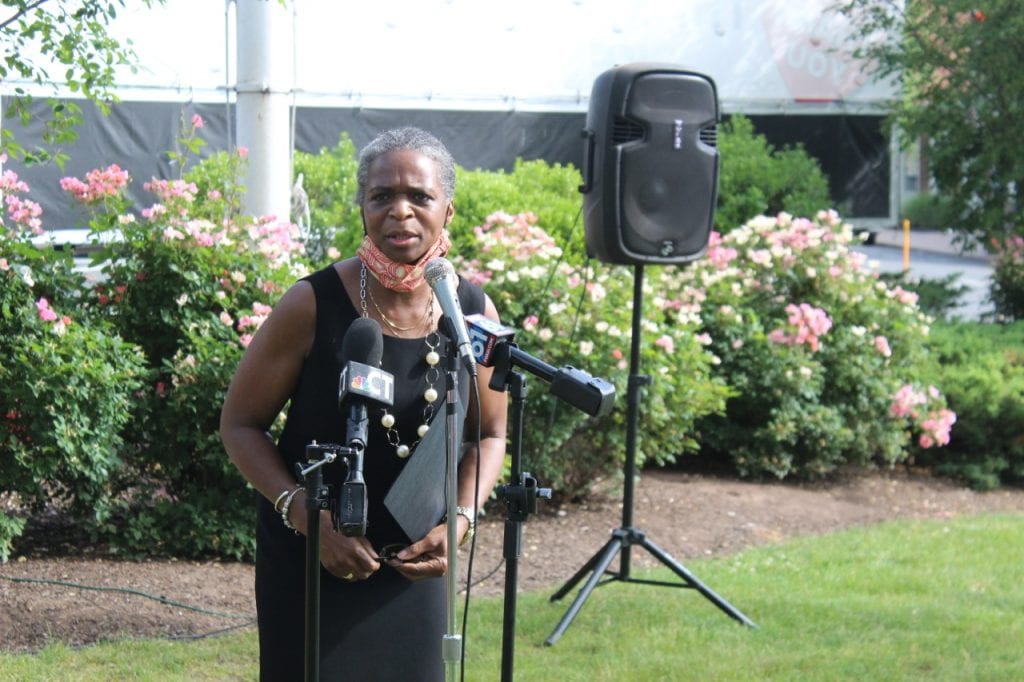 The event concluded with Town Councilor Carol Blanks reading a proclamation formally apologizing to the “decedents of the individuals, many of whom died without the title of a free person they so richly deserved; and fully acknowledge, respect and recognize their agency as free human beings and further recognize through the intentions of the Emancipation Proclamation.”

Board of Education Vice Chair Lorna Thomas-Farquharson then read the names of the 23 enslaved people who lived in West Hartford.

“This is something that has been long overdue and today is the day West Hartford is finally recognizing those that have been enslaved. That is something all of us should celebrate,” she said. 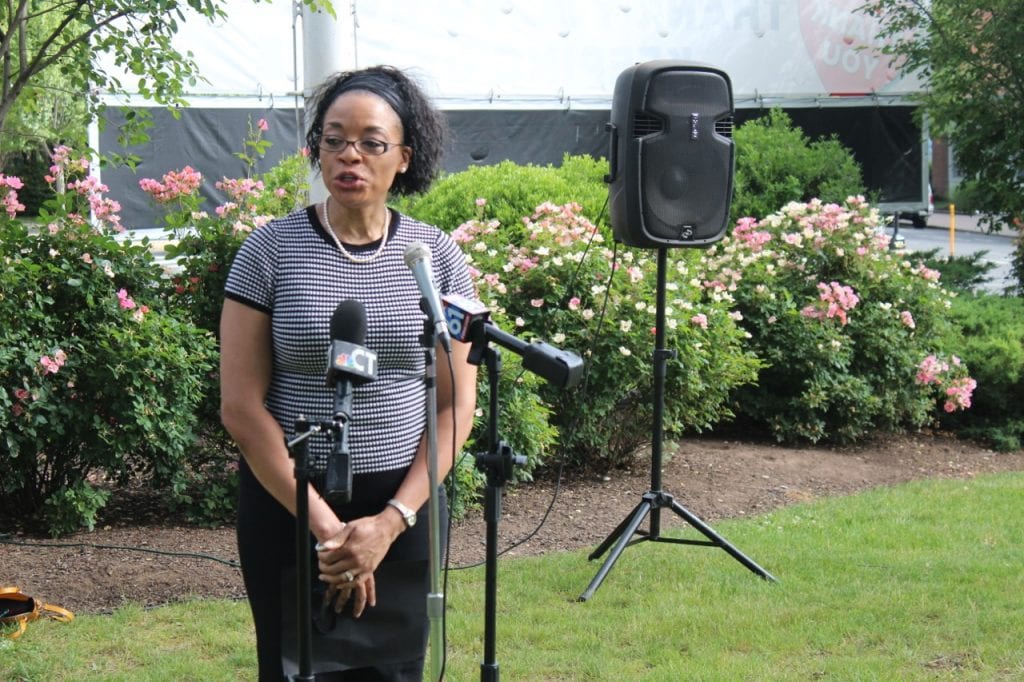 Reading the names, Thomas-Farquharson said, was significant to humanize them.

Indeed, Thomas-Farquharson noted enslaved people were listed as chattel along with other farm animals.

“A name says so much. Intentionally many enslaved individuals were not recognized by name. That was done as a way of taking away who they are. Taking away their presence. It was done intentionally. We will do that no more.” 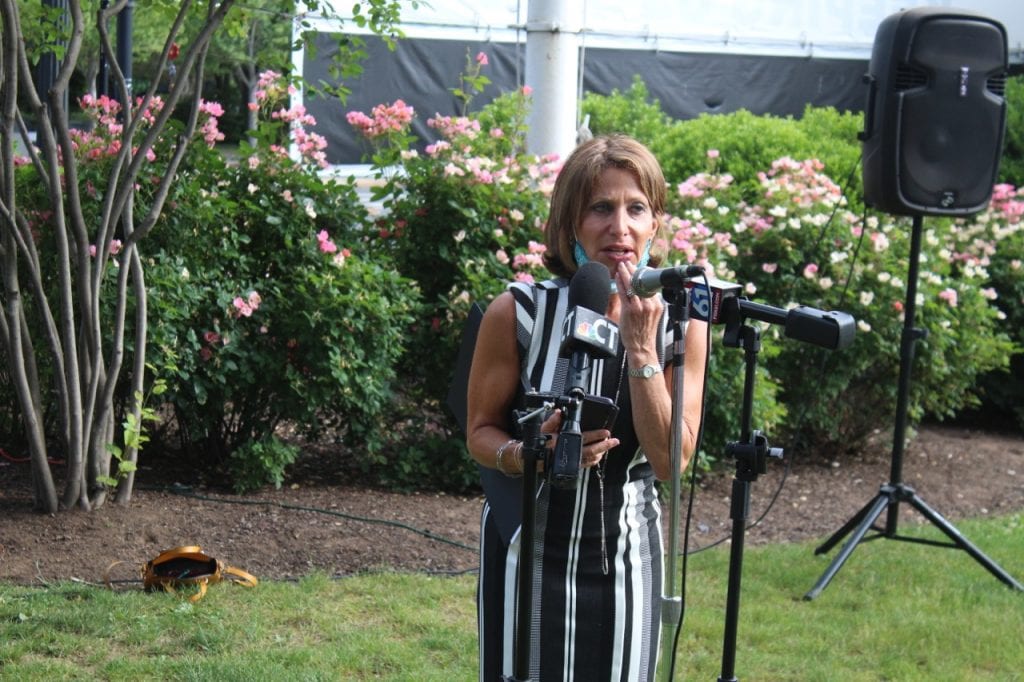 Mayor Shari Cantor opened the ceremony by noting that, in light of recent police brutality, inequities within the health care system even more marked with the devastation COVID-19 has wrought on the Black community, a lot of work needs to be done going forward.

“I’m a little embarrassed this is the first time we’ve done this,” Cantor said. “I want to make sure this is an ongoing a tradition and we all come together and give this day a lot of thought. …

“I heard someone say this morning from the Urban League, this is the start of the start. We need to keep doing the work. I’m happy to see so many new faces. We’re going to need all of you to make our communities better to fully fulfill our nation’s contract, leaving no one behind. That is essential work we all have to do together. I’m thanking you in advance of the tremendous work we have ahead of us.” 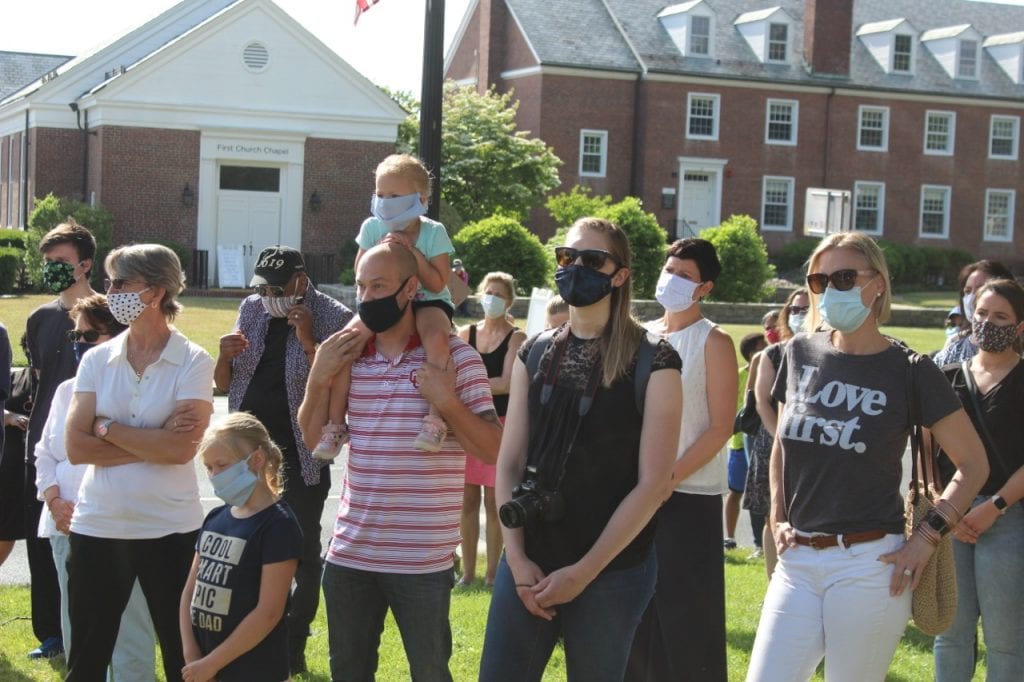 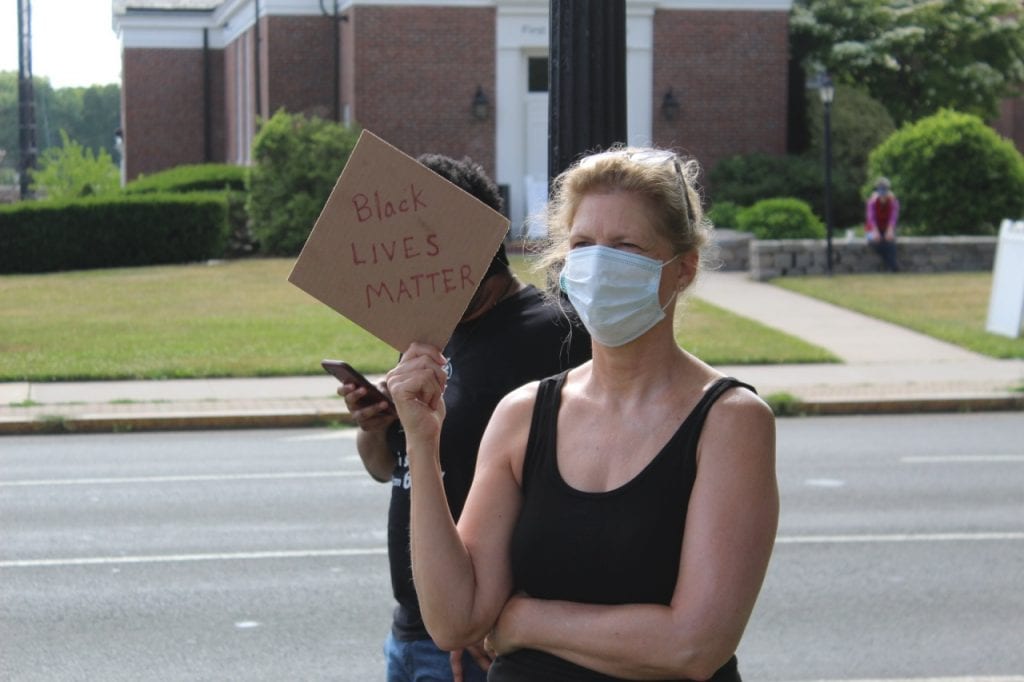