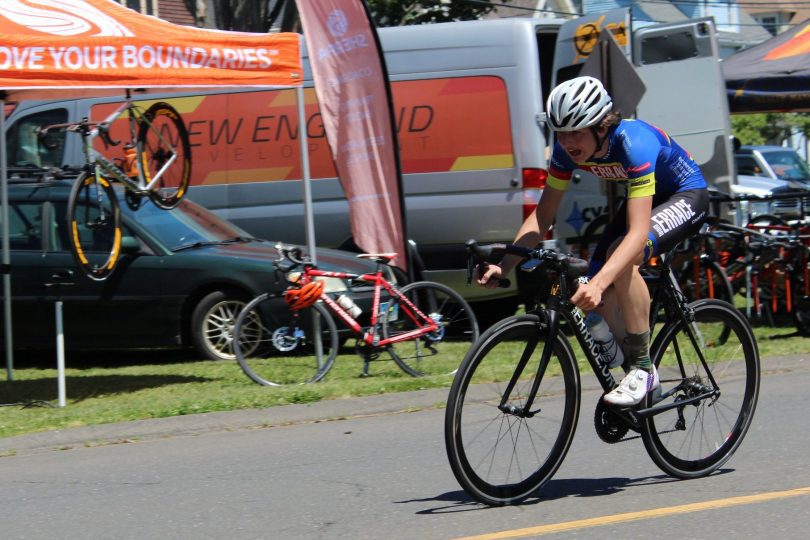 The Connecticut Cycling Advancement Program (CCAP) is delighted to report the news about one of the top young cyclists in the program, Nic Villamizar.

Nic, who recently graduated from Glastonbury High School, now lives in West Hartford with his father, Juan Villamizar. Unlike the traditional young cyclists, Nic was not raised in a family already involved with cycling. He only began cycling four years ago because it was obvious to him and others that he was not meant to play traditional team sports.

Nic spent the summer working at Central Wheel on the Farmington/West Hartford line as a sales associate and cycles regularly on his Cannondale SystemSix bike in the West Hartford area and on Tuesdays also participated in the CCAP Crits held at Rentschler Field. Nic particularly likes to ride the rail trail from Plainville north to various Massachusetts destinations. This rail trail is paved so it is an excellent location to practice while avoiding the heavily traveled and narrow Connecticut roads.

He first started training and participating in the cycling series of road bike races held by CCAP Tuesday evenings throughout the summer known as the Tuesday Night Criterium at Rentschler Field in East Hartford. There, he was taught how to ride in a group of other riders known as a “pack” and developed a strong sprint enabling him to break away from the group, a skill he learned from his CCAP coaches and fellow racers. This gave Nic the skills he needed to begin competing at a higher level. CCAP has hosted Junior-specific and Open races at this location through the summer.

Nic participated in multiple USA Cycling National Cyclocross Bike Championships from 2018 through this year. His first championship attendance in Louisville, KY, got off to a rough start due to an early crash in the opening seconds of the race, which forced him to take a spare bike from the support pit. He rode his best, considering the circumstances, but felt he could have done better on his own machine. Nic competed the following year at the National Road Championships in Maryland and at the Cyclocross National Championships in Tacoma, WA, where he finished 25th. This year the USA Cycling Road Nationals were held June 25-29 in Jacksonville FL.  Here, Nic unfortunately got caught up in a crash but was able to pedal his way back to 15th position in the sprint finish.

In addition to riding with his local CCAP Greater Hartford ERRACERS team, Nic has participated on the CCAP Junior Travel Team with up to six other cyclists and appreciate cycling as a team sport, but he stated, “While riding is extremely solitary, I know exactly what I need to do, but it is just how I get there and accomplish any particular race that matters in the end.” Villamizar also took on a larger role within his local CCAP team, stepping up two years ago as a coach-in-training and assisted younger or less experienced riders by teaching basic bicycle handling and instilling the core values of the program.

Nic shifted gears during the pandemic and started bikepacking, a form of lightweight bicycle touring. He rode all over New England, some days exceeding 120 miles under his own power while carrying all of his gear.  Villamizar feels he gained his most growth duri ng this period and attributes his thoughtful teammates and their close connection with his ability to maintain motivation during COVID-19.

The Connecticut Cycling Advancement Program’s mission is to ensure that Connecticut’s youth and their families have access and exposure to an organized state-wide youth cycling league. Additionally, youth and their parents should be able to see a clear avenue that allows them to develop as far as their ambition, skills and abilities can take them. The sport of cycling teaches a child or young adult a wealth of values, social skills and mindsets that help them become successful in every aspect of their life, and the CCAP is proud to provide kids across the state with the opportunity to participate in a safe and positive team-based environment.

For more information as events for 2021 develop, please visit ctcyclingadvancement.org.