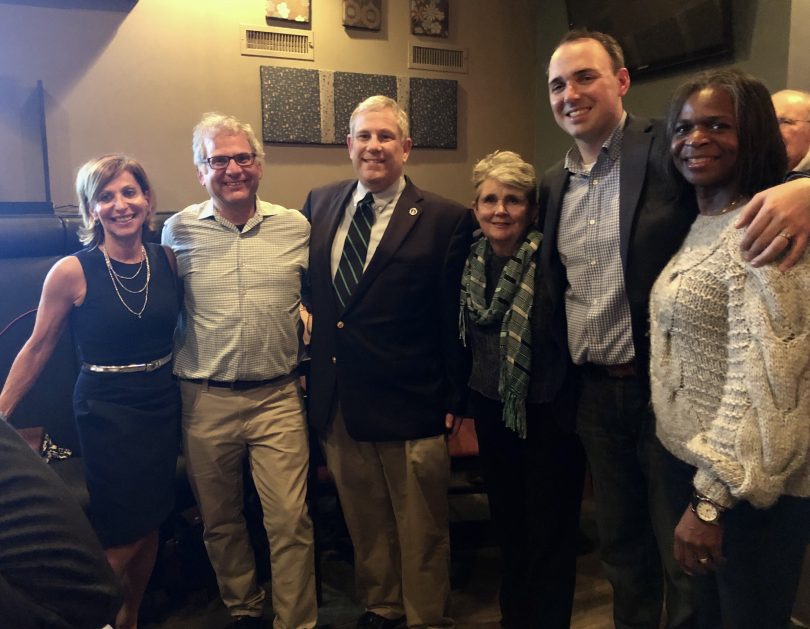 Incumbent West Hartford Mayor Shari Cantor has been re-elected as the Democrats retain all six seats on the Town Council by a sizable margin, and Republican newcomer Lee Gold leads his party’s slate. [Vote totals updated] 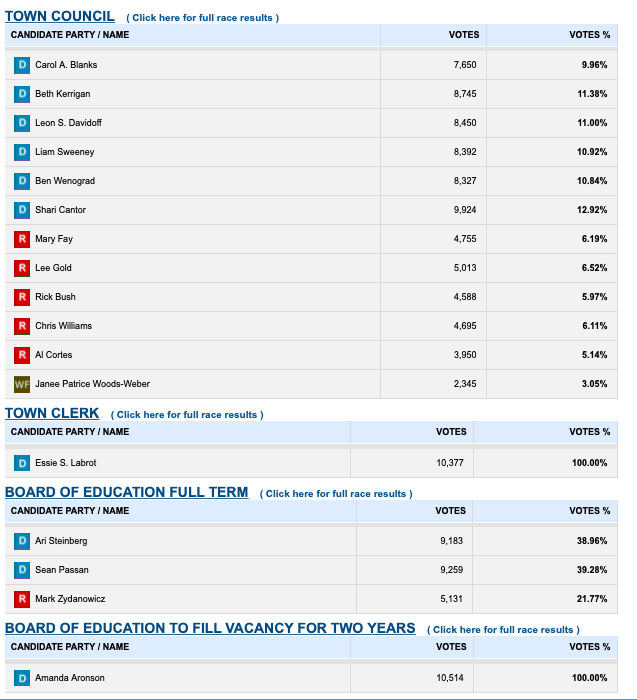 The winners of Tuesday’s municipal election in West Hartford did not change but updated results submitted to the Secretary of State’s office (see above) in most cases show slightly higher vote counts overall than reported earlier in the evening.

In the Board of Education race, Democratic newcomer Sean Passan received the highest number of votes for a four-year term with 9,259 votes, followed closely by newcomer Ari Steinberg with 9,183 votes. Republican Mark Zydanowicz, who received the most votes of any Republicans overall, received 5,131 votes.

Democrat Amanda Aronson, who was appointed to the Board of Education to fill the vacancy arising from Cheryl Greenberg’s resignation, was running to complete Greenberg’s two-year term. She received the most votes of any Democrat overall, with 10,514 according to the Secretary of State’s website.

West Hartford’s voter turnout was 34.30 percent, with 13,961 out of the 40,707 registered voters casting their ballot Tuesday according to the Secretary of State’s website. 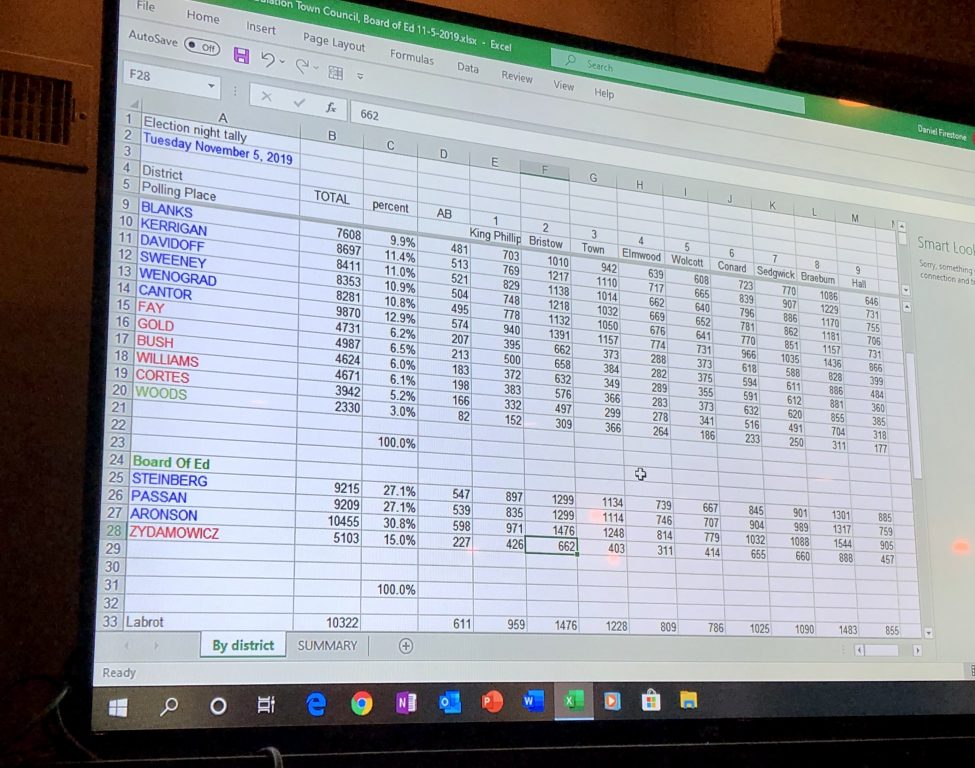 Unofficial vote totals by polling place, plus Absentee Ballot results on display at the Democrat’s gathering at the Butterfly. Photo credit: Ronni Newton

West Hartford Democrats celebrated a resounding victory for all of their candidates Tuesday night at the Butterfly Restaurant, cheering as the vote totals were displayed and all six Democratic Town Council candidates led the contest by a wide margin and the party also retained its five-seat majority on the Board of Education.

Town Clerk Essie Labrot, a Democrat, was also re-elected in an unopposed contest. 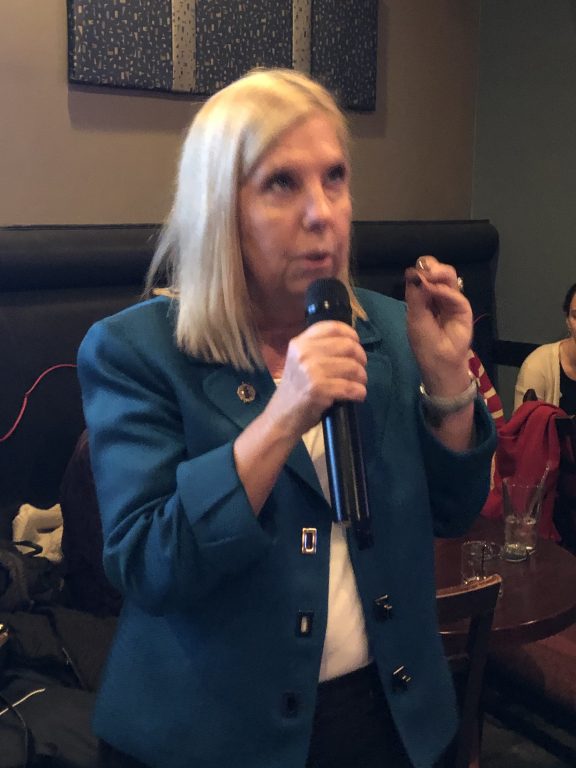 West Hartford usually reports its election results quickly, but in this election overall vote tallies were delayed and not received until more than an hour after polls closed due to a malfunctioning tabulator at Bristow Middle School. Earlier in the day tabulators at Hall, and later at Conard high schools also malfunctioned, requiring all ballots at those locations to be re-fed through a replacement machine so that they could be counted correctly.

When the totals were finally posted Tuesday night, results showed Mayor Shari Cantor was the top vote-getter by a large margin, garnering 9,870 votes – about 900 more than she received two years ago – according to unofficial totals. Deputy Mayor Beth Kerrigan was second with 8,697 votes, followed by Leon Davidoff (8,411), Liam Sweeney (8,353), Ben Wenograd (8,281), and Carol Anderson Blanks (7,608).

Blanks, who currently chairs the Board of Education, was running for Town Council for the first time for the seat being vacated by Dallas Dodge who decided not to seek re-election.

The majority party is limited to no more than six of the nine seats on the Town Council, and the remainder of the seats were retained by Republicans in Tuesday night’s election. 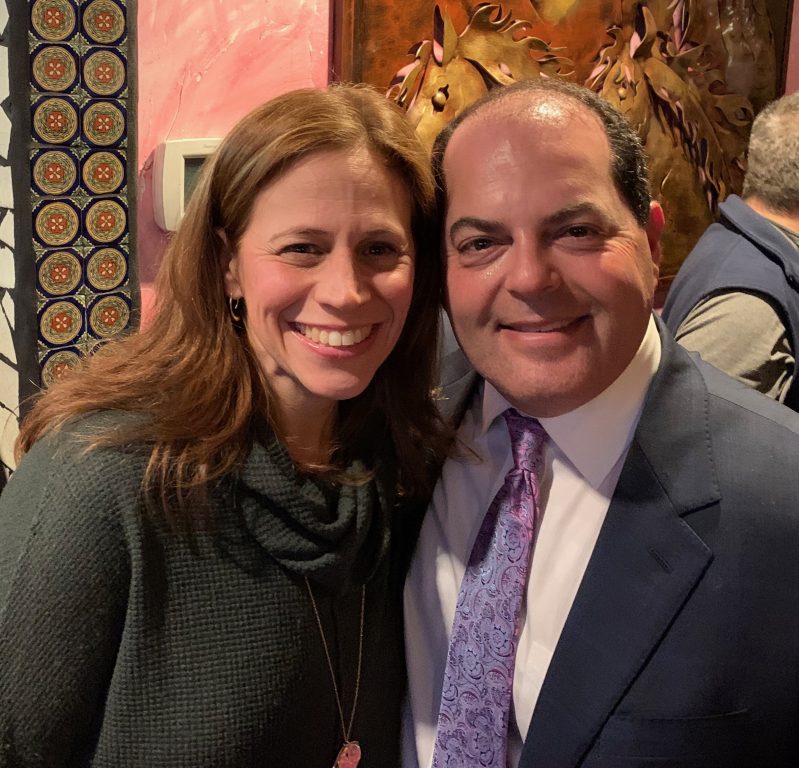 Although according to the town’s charter West Hartford’s mayor is technically elected by the Town Council, the position traditionally goes to the candidate who receives the highest number of votes, which Cantor did by a wide margin. As his party’s highest vote-getter in the Town Council race, Gold will likely be named minority leader.

The number of Board of Education candidates running equalled the number of seats open, and even though there were candidates from both major parties, all were essentially guaranteed victory. The Democrats retained a 5-2 majority on the Board.

According to unofficial results displayed by the West Hartford Democrats, newcomers Ari Steinberg (9,215) appeared to have received the highest number of votes for one of the open four-year terms, followed very closely by Sean Passan with 9,209 votes. Vote tallies on the Secretary of State’s website, however, showed Passan with more votes than Steinberg. 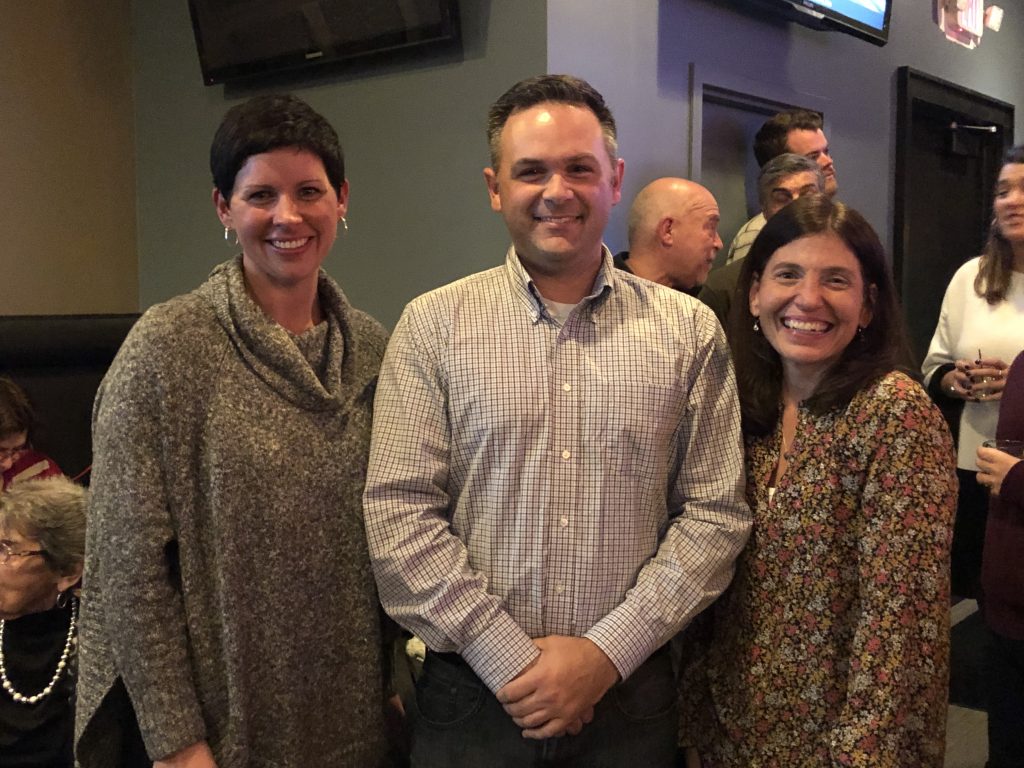 Democrats elected to the Board of Education include (from left): Amannda Aronson, Sean Passan, and Ari Steinberg. Photo credit: John Lyons

Democrat Amanda Aronson, who was appointed to the Board of Education in July to fill a vacancy when Cheryl Greenberg resigned, received the highest vote count of any candidate for any race Tuesday night, receiving 10,455 votes to be elected to finish out the remaining two years of Greenberg’s term.

Speaking to the crowd at the Butterfly, Democratic Town Committee Chair Jessica Tyburski thanked all of the district chairs, elected officials, and volunteers for their roles in achieving the party’s goals.

“The West Hartford residents are clearly happy with the direction of the town under the Democratic leadership,” Tyburski told the crowd. “We have one of the most diverse slates of candidates in West Hartford history and we are proud that the town will lead with such an inclusive coalition.” 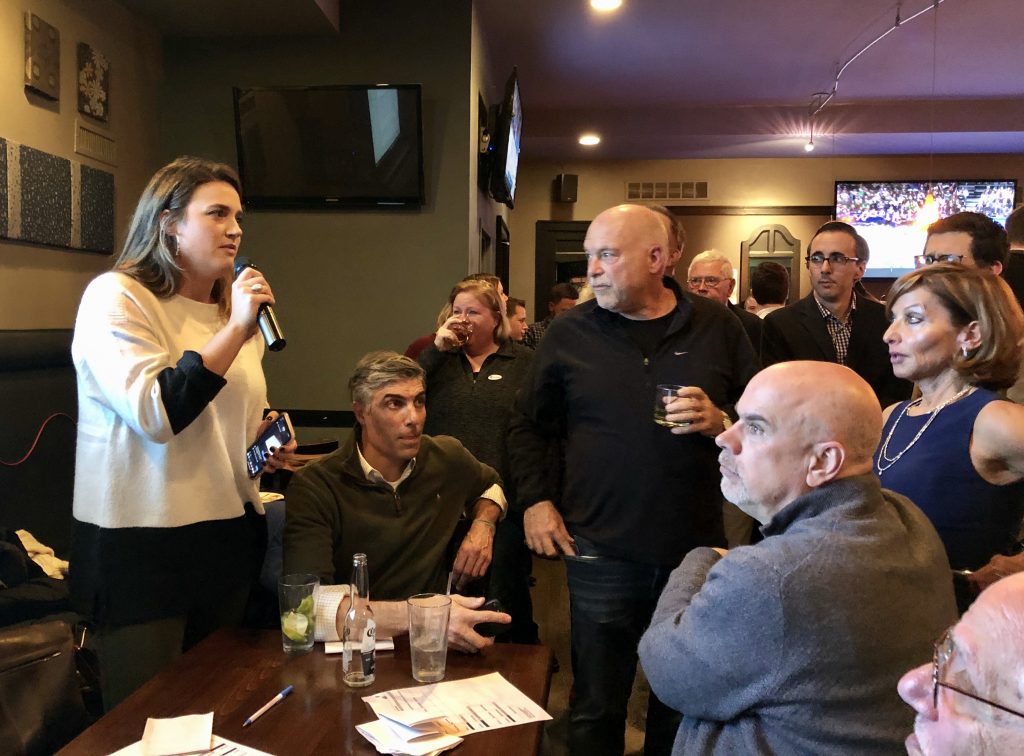 Cantor thanked everyone for their incredible support. “You made the difference, look at the numbers,” she said.

“These numbers are big, don’t take them for granted,” said Cantor. “We have to work really hard every day to represent the Democratic values, all that we bring to the table.”

“We’re happy with the results,” said Republican Town Chairman Dennis Swanton. “We were nervous about the Working Families Party candidate and I think that we have great candidates coming up. … The numbers are against us, we know that and I think that we have a strong Town Council going in.” He said he is proud of the way Republicans have reacted to the challenges they have faced from the Democrats. 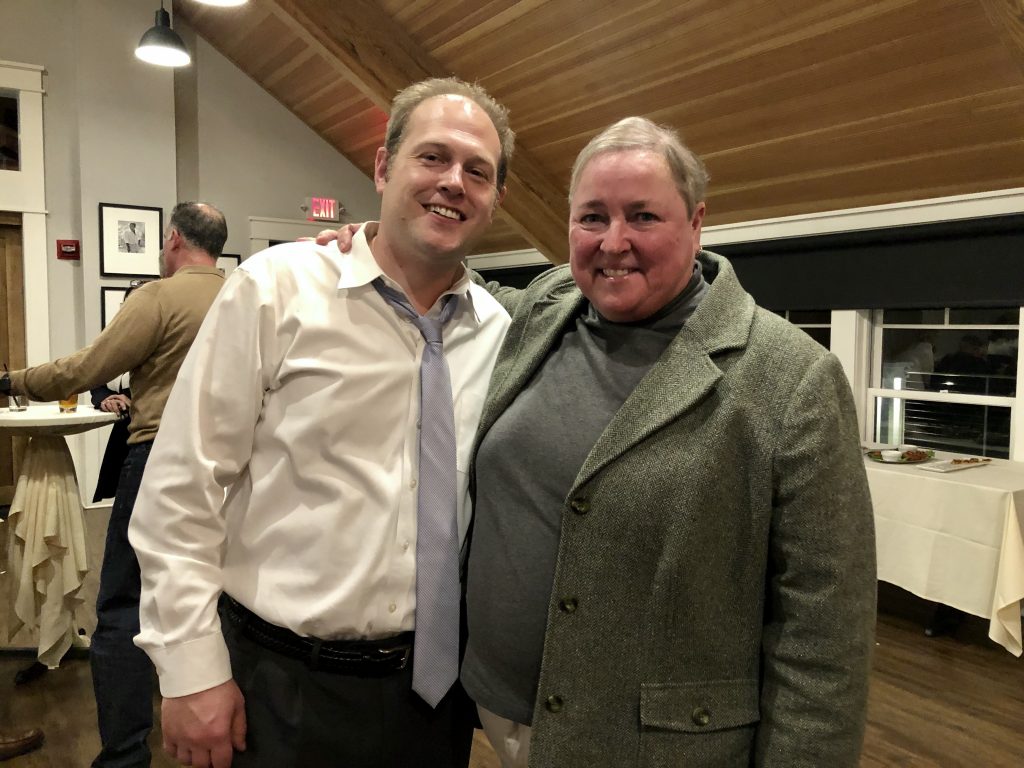 Swanton said he was not surprised to see Gold lead the Republican slate in Tuesday’s contest. “Lee Gold did a great job. Lee Gold ran a smart campaign, he came out of the chute right away,” said Swanton.

“Lee is smart, he is thoughtful,” Swanton said, and he expects him to be a great minority leader.

“I’m very excited,” Gold told We-Ha.com. “I’m looking forward to helping any way I can and being part of the leadership.”

Gold said that he started his campaign with a plan, and was able “to execute the plan the way I wanted to.” He gave much of the credit for his successful race to his campaign manager, Mark Merritt, and other members of his committee.

According to unofficial results on the Secretary of State’s website, West Hartford’s voter turnout on Tuesday was 31.14 percent, roughly one percentage point higher than it was for the 2017 municipal election.

Results will be verified and updated as soon as totals are official.