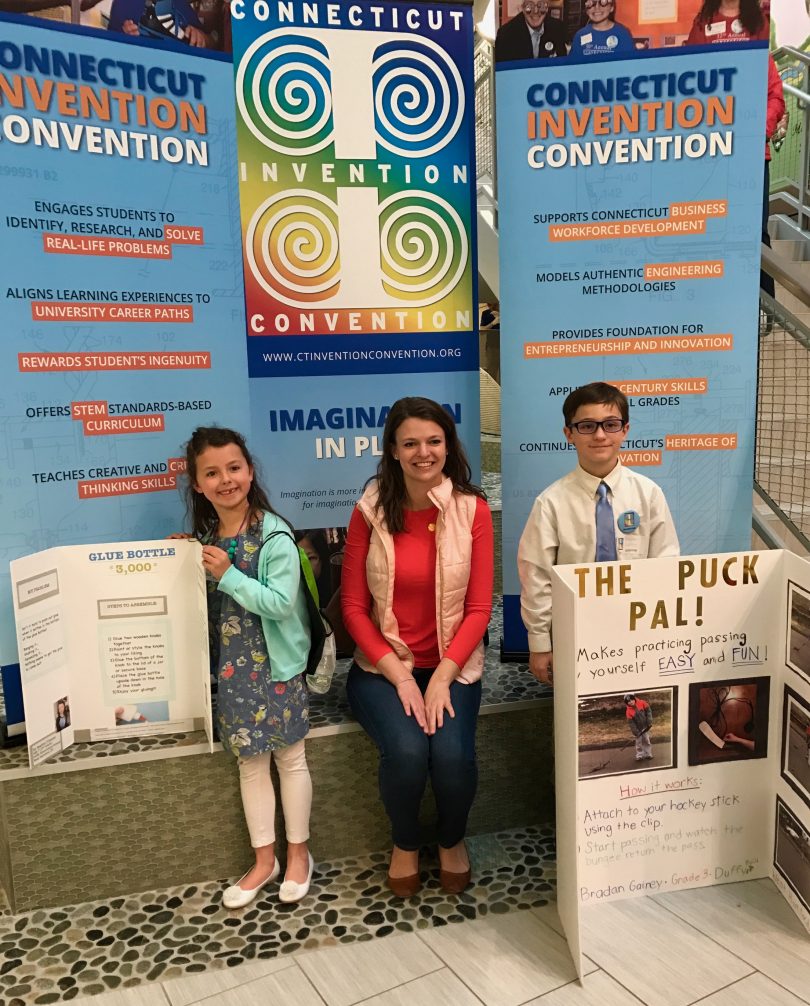 Two students from West Hartford’s Duffy Elementary School were given the opportunity to showcase their inventions at the Connecticut Invention Convention at Gampel Pavilion.

Bradan Gainey, a third-grader at Duffy Elementary School and Madelyn O’Connell, a second-grader, also at Duffy, qualified for the state competition, under the tutelage of Duffy kindergarten teacher and Duffy Invention Convention Club facilitator Laura Veilleux.

The CIC is an organization started in 1983 as part of the Connecticut Educators Network for the Talented and Gifted, but today is open to all K-8 students in all schools and school groups across Connecticut. The program is designed to develop, encourage, and enhance critical thinking and creative problem solving skills through invention and entrepreneurship.

In the first step of the program, tudents from Duffy Elementary School took part in a six-week course, run by Veilleux and fellow kindergarten teacher Jill Morrissey, where they were asked to develop an invention which solved a common problem. 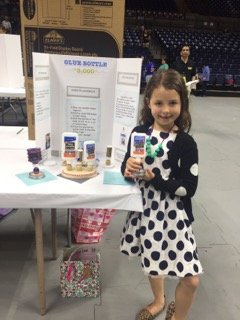 Madelyn O’Connell shows off the glue bottle holder she invented – the Glue Bottle 3,000 – a device which earned her a spot in the Connecticut Invention Convention. Photo courtesy of Jennifer O’Connell

All of the students spent weeks developing their invention by using the CIC Invention Log. Duffy Elementary School hosted their school’s Invention Convention on March 22, 2017, where inventions were judged by several CIC judges.

“Invention Convention is a great opportunity for students to use their creative ability and develop STEM skills,” said Veilleux, “I’m so proud of all of the Duffy students who participated and look forward to seeing what our inventors create next year.”

Through the school’s judging process, student inventors are identified and registered online to participate in one of four Regional Invention Conventions.

Bradan’s invention – The Puck Pal– makes practicing passing in hockey fun and easy. “I love hockey and thought of how I’d love to be able to practice passing when my friends aren’t around or I’m not practicing with my team, so I invented The Pack Pal,” said Bradan. It is a product that easily attaches to any hockey stick without ruining it, allowing hockey lovers everywhere to practice on ice, street, or gym – sending and receiving puck passes. 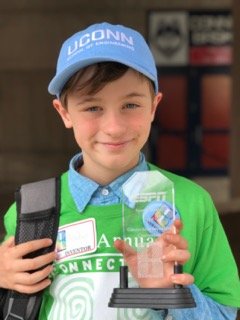 Bradan Gainey shows off the ESPN award he received for his invention, The Puck Pal, at the Connecticut Invention Convention at Gampel Pavilion. Photo courtesy of Jennifer O’Connell

Madelyn’s invention – The Glue Bottle 3,000 – is a system that holds wet glue bottles upside down so that the glue is held at the tip of the bottle instead at the bottom of the bottle, preventing the glue from drying out. “I observed my teacher, Mrs. Curran, trying to get the glue out of the bottle during a class project,” Madelyn said. “She tried banging it, shaking it … nothing seemed to work!” Madelyn said she developed a holder for the bottle that keeps the glue ready to use at all times.

Bradan and Madelyn were invited to represent Duffy Elementary School at the Central Regional Invention Convention at Goodwin College on April 8, 2017, which was one of four Regional Competitions throughout the State. The CIC curriculum is standards-based and enables students to research, analyze and effectively focus on and solve their real-life problems.

At the regionals, students present their inventions and prototypes within small groups comprised of students of the same grade level. Judges from professions in STEM volunteer to listen to each student’s presentation and then select the students that will move on to the State Annual Invention Convention, also known as the CIC Finals.

Both Bradan and Madelyn advanced to the State CIC which took place on Saturday, April 29, where winners from all four regional competitions presented their inventions on the floor of Gampel Pavilion. The annual convention gives many students and parents an introduction to careers in engineering with exhibits staffed by UConn’s students and professors showcasing engineering subjects, including civil, mechanical and chemical engineering – helping students discover engineering and science as real and possible careers, definitely within reach.

At the annual Connecticut Invention Convention, more than 600 inventors are given the opportunity to display their inventions to their peers and judges in groups of eight to 10 inventors. From each group, judges select two inventors for recognition, and the CIC presented about 140 of these awards.

In addition, there are sponsored awards for inventors in particular subject areas or themes. Bradan’s Puck Pal was one of four inventions selected for the ESPN Sports Award at the State CIC.

Though Bradan and Madelyn did not advance to the National CIC, the experience of competing against thousands of fellow students was priceless and they made their school and families very proud.