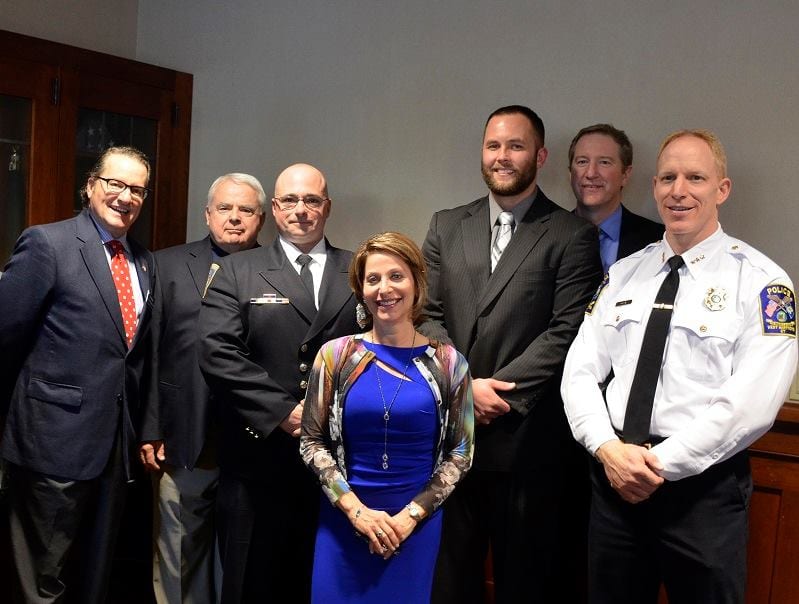 The Firefighter of the Year and Police Officer of the Year were honored Wednesday at the West Hartford Exchange Club’s annual ceremony.

A crowd gathered at the American Legion Hall Wednesday night as the West Hartford Exchange Club held its annual ceremony honoring two individuals chosen for their commitment to the town’s public safety.

Officer Christopher Tyler was honored as Exchange Club Police Officer of the Year, and Apparatus Operator Robert Howe was named Firefighter of the Year.

West Hartford Police Chief Tracey Gove said that Tyler was recommended for the honor by his peers.

Tyler, a graduate of Stony Brook University who was not only a Dean’s List student every semester but also played Division I football, joined the West Hartford Police Department in August 2010. He has been a patrol officer and is currently a member of the Community Interaction Team.

As a police officer, Tyler is a “crime fighter,” Gove said. “Not to say he’s not community oriented, but every day he’s on the street, he hunts for those doing bad things,” and as a new officer quickly proved that he had maturity, level-headed decision-making, and poise, and the ability to decide when to pursue and when not to pursue a suspect.

Tyler is a new member of the departments Commendations Committee, has been a Field Training Officer for two-and-a-half years, and is a member of the Emergency Services (SWAT) Unit who graduated from “the highly-regarded anti-terrorist program DARC in Arkansas.

Gove said that Emergency Services Unit Commander Lt. Jeremy Clark called Tyler, “the consummate team player who mixes the perfect amount of intensity and humor to make every mission or training evolution the best it can be.”

Tyler has received multiple citations for his work, including three unit citations for work in a homicide investigation, apprehension of a home invasion suspect, and for assisting Hartford Police with a pursuit of a carload of suspects who were found to have a loaded sawed-off shotgun in the car.

Tyler has also received three department citations. In 2013 he received a citation for helping apprehend a felon who fled from a vehicle, and retrieve a .45 cal handgun with a filed-off serial number that had been submerged in Trout Brook.

Tyler has also earned a merit award for apprehending a suspect in 2014 who was wanted for multiple larcenies in West Hartford and Farmington, and a letter of commendation for for saving the life of a 73-year-old man who collapsed while mowing his lawn and who turned out to be the father of another West Hartford Police officer.

He has received multiple letters of commendation, for deeds including providing security to Pres. Barack Obama during a 2013 visit to the University of Hartford and for shoveling snow so that an elderly woman could use her walker on the sidewalk.

Apparatus Operator Robert Howe was nominated by his peers as Firefighter of the Year.

Battalion Chief William Kall noted Howe’s heroic efforts in rescuing two people who became trapped on an upper-floor balcony when a fire broke out on a lower floor at 140 Kane St. on March 10, 2016. Smoke and flames were pouring out of the building when fire crews arrived.

Approximately 100 people were displaced as a result of that fire, and seven were injured.

Mayor Shari Cantor read proclamations noting the achievements and reasons for selection of both honorees.