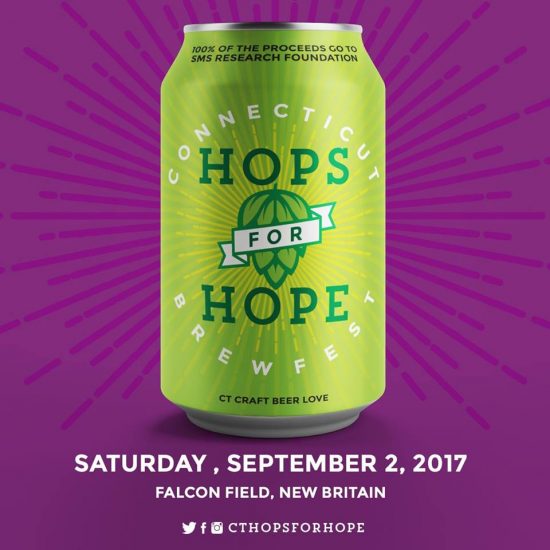 Steve Wood’s oldest son has Smith-Magenis Syndrome, a rare genetic syndrome, and he is helping organize the second ‘CT Hops for Hope’ event to fund research that will help all children diagnosed with the disease.

Steve Wood, a West Hartford resident since 1991 who by day is a research analyst in the insurance and financial services industry, writes a blog called CTMQ, a travelogue of Connecticut.

When he started the blog 11 years ago, it was called “CT Museum Quest,” but eventually realized that was too limiting. He wanted to add reviews and write-ups about trails and what at the time was Connecticut’s fledgling craft brew industry, so he rebranded to just CTMQ.

He also set out to taste and review all of the beer brewed in Connecticut, when there were only about 20 selections.

“Obviously the industry has grown, and ridiculously fast, and I can’t do that,” Wood said. But as the industry grew, and as his blog grew, Wood developed strong relationships with the “movers and shakers” in what is now Connecticut’s thriving craft brew industry.

On the home front, Wood and his wife, Hoang, have two sons, one of whom has Smith-Magenis Syndrome (SMS), which according to the Smith-Magenis Sydrome Research Foundation (SMSRF) website impacts 1 of 15,000 live births in the United States. It was first identified in 1982, and research into the disorder, which involves a missing piece of the 17th chromosome, is still in its infancy. It’s a complex disorder, impacting multiple organs within the body, and resulting in cognitive and behavioral challenges.

So much of what’s important to Wood comes together at Hops for Hope, a one-of-a-kind brewfest that he hopes will raise tens of thousands of dollars for SMSRF, a cause that’s very near and dear to his and his family’s hearts.

Wood said that some of his friends, local craft beer fans, started planning a brewfest in late 2014. They decided to make the event 100 percent for charity, but didn’t start out with a charity in mind, he said. They all knew Wood, and his work with SMSRF, and the plans started moving forward.

“They decided to put together a brewfest in 2015. They didn’t even tell me about it for months,” Wood said.

“It’s incredible how selfless they are,” Wood said. The planning took hundreds of hours, and the event is put on completely by volunteers.

The group took a year off, but the second CT Hops for Hope will be Sept. 2, from 2-5 p.m., at Falcon Field in New Britain. Wood said they hope to top the amount raised in 2015.

More than 40 breweries are participating this year, including a number of the state’s and region’s best local breweries that don’t often do brewfests but have added their support thanks to a strong relationship with Wood. The beer is high quality, there are no lines, and they don’t run out.

There are sponsors who fund some of the event costs, but Wood said that 100 percent of ticket proceeds are donated to SMSRF.

Click here for more information, to purchase tickets, or to donate.

Wood wrote on CTMQ that SMS turned his life and his family’s life upside-down and inside-out.

“But there is hope. The Smith-Magenis Syndrome Research Foundation and the dedicated lab it sponsors at Baylor College of Medicine is getting there. And it will get there with grassroots efforts like CT Hops for Hope,” Wood wrote.

Wood has a compelling story to tell about his son Damien, and how Hops for Hope is giving him hope and making others aware. Click here to read that story.