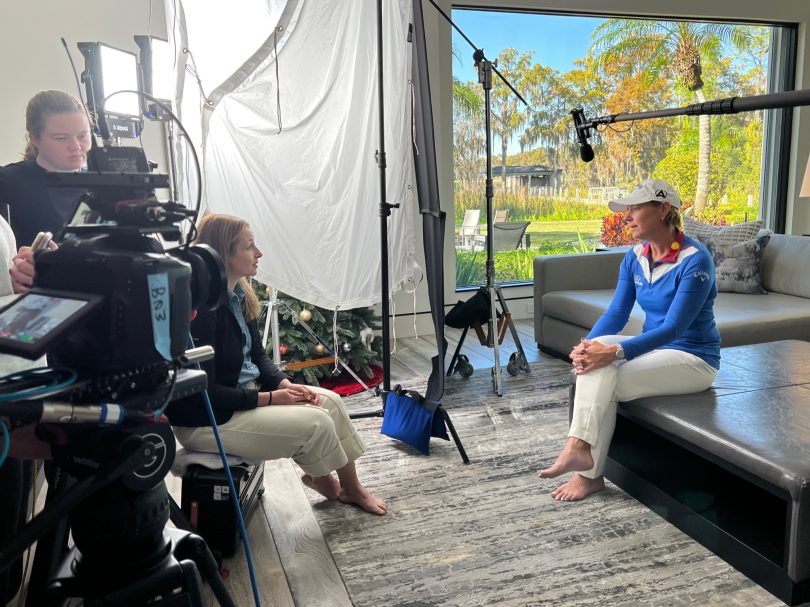 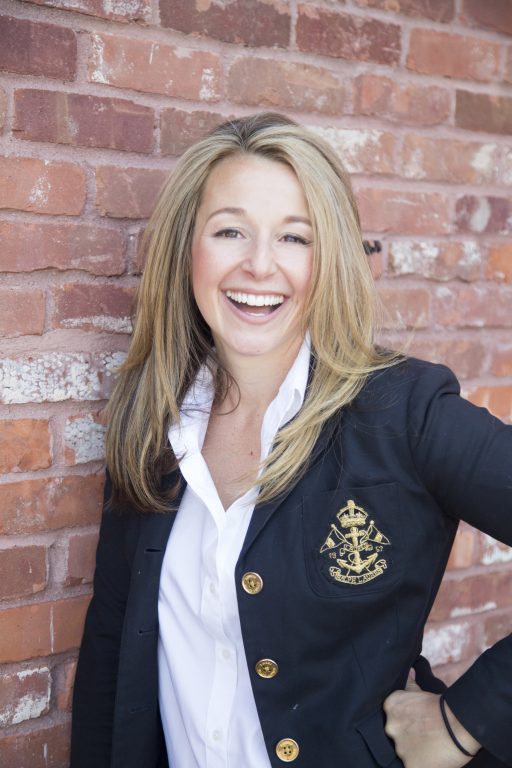 For some people, the name Annika Sorenstam is not well-known. For others, she is recognized as one of the greatest golfers of all time. A documentary profiling this Swedish golf legend will premiere on Tuesday, May 10, at 9 p.m., on Golf Channel.

Narrated by Academy Award-winning actress Hilary Swank, the new documentary “Becoming ANNIKA,” was produced by NBC Sports in conjunction with the U.S. Golf Association (USGA). West Hartford resident Adrienne Gallagher directs the film. As managing director of Greenlight Productions, based in West Hartford and Atlanta, the creative and energetic Gallagher put together an all-female crew who devoted a year and a half to making this documentary. 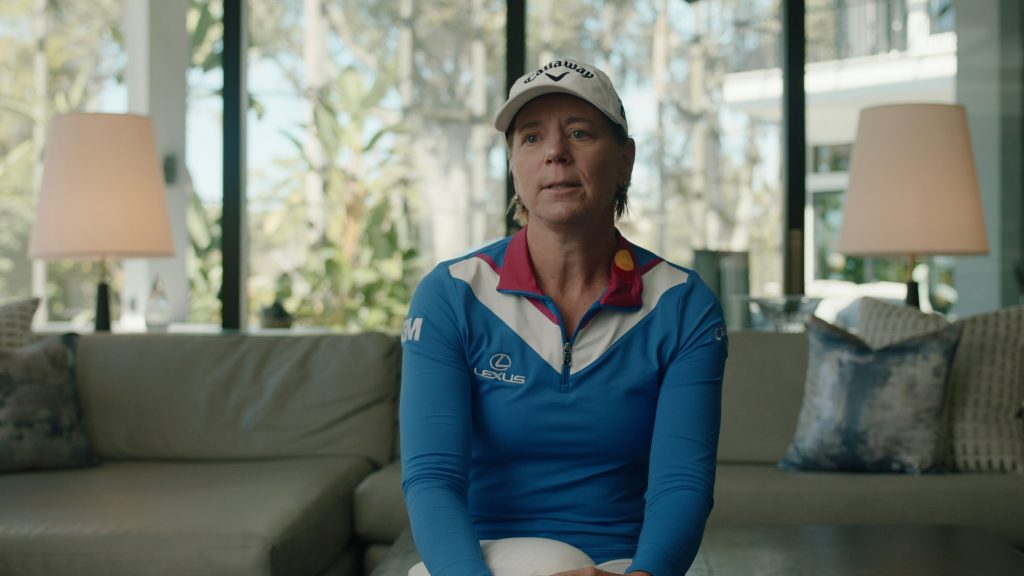 Gallagher noted the fastest growing demographic in the sport of golf is the women’s game. The USGA was seeking to profile a woman champion and tell her story.

“There are so many stories,” said Gallagher. “But Annika is unmatched in her golfing dominance, so this was a logical and golden opportunity.”

At the time the documentary was conceived, Sorenstam was considering coming out of retirement to again play competitively. So, telling both her historic and current story made the film even more compelling, Gallagher explained.

The biopic explores the 51-year-old Sorenstam’s journey from growing up playing her hometown golf course in Bro, Stockholm County, Sweden, to becoming arguably the best female golfer in history. Viewers will learn about her personal life, including a painful divorce from David Esch, and her decision to step away from golf in 2008 to raise a family.

Now happily remarried to Mike McGee, Sorenstam has two children – a daughter, Ava, and a son, Will, who was born premature at 27 weeks.

Doctors were not sure he would survive. But not only did he survive, he thrived. From an early age, Gallagher related, he was “bit by the bug of golf,” and mother and son spent hours together hitting golf balls. It was Will (named for his “will to live”) who encouraged Annika to get back on the links. In 2021, Will proudly watched his mother win the U.S. Senior Women’s Open, her first USGA championship in 13 years.

Production on the film began at the Senior Women’s Open at Brooklawn Country Club in Fairfield, CT. It features interviews with Sorenstam’s family, as well as players, golf reporters, her former caddie, and World Golf Hall of Famers. Filming took Gallagher and her crew from Annika’s current residence in Lake Nona, Florida, near Orlando, to Lapland in northern Sweden, where Gallagher filmed the Northern Lights. 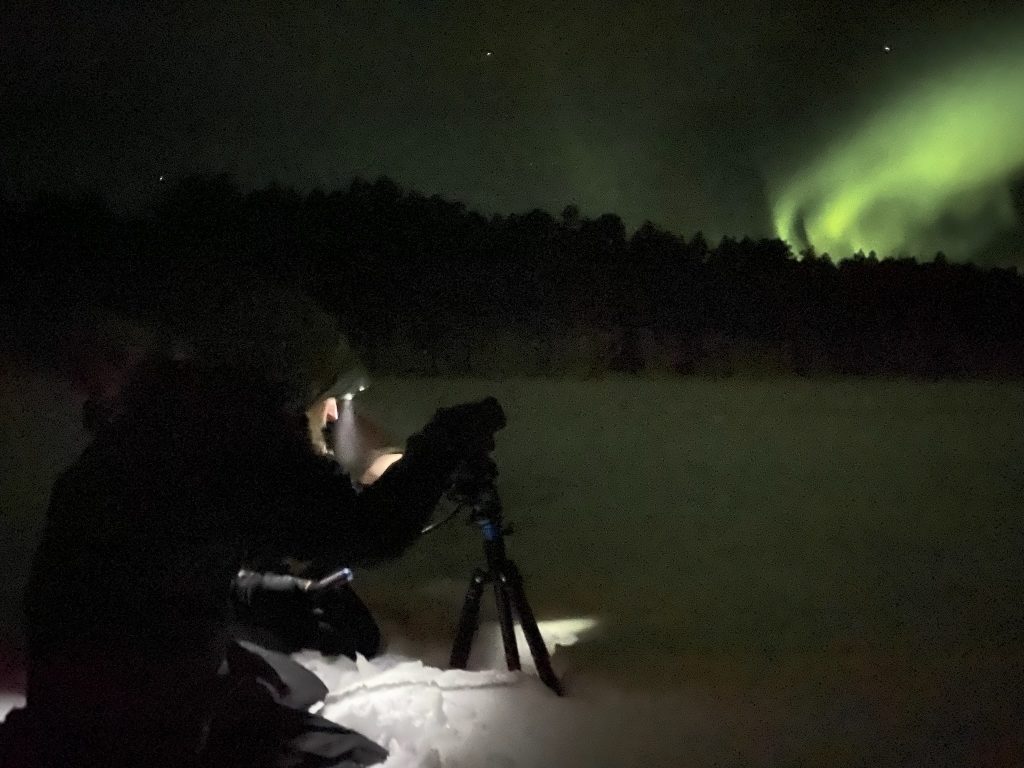 Filming the documentary of golf legend Annika Sorenstam took the few to her Lapland in Northern Sweden, where they saw the Northern Lights. Courtesy photo

After spending so much time with this golf icon, what were Gallagher’s impressions of probably the best ball striker ever to walk a course?

Said Gallagher, “Annika is warm and shy and a very dedicated mother. As a competitor, she is ruthless. Very tough, very focused on winning. She made very few friends on the circuit,” the filmmaker laughed.

There is a scene in the documentary where Sorenstam encounters a young girl at a clinic who asks for advice about competing against boys. Sorenstam tells her, “Yes, you know you can beat them right? You know that. Beat them. Be tough.”

Raised in Sylvania, Ohio (near Toledo), Gallagher earned a B.S. in marketing from Ohio State. While attending an Ohio State-Penn State football game, she had the gumption to knock on the ABC-TV trailer and offer to volunteer. This led to a career in broadcasting, climbing the ladder as a producer at Golf Channel, working the golf circuit for ABC and ESPN and going out on her own as a successful freelance producer. Her next stop was becoming managing producer at GO in West Hartford.

Greenlight Productions is a division of GO – a marketing and communications agency on Park Street in Hartford, headed by CEO Chad Turner. Founded in 2020 as a branch of GO, Greenlight is a full-service video production house specializing in features, commercials, documentaries, branded content and live television.

Gallagher’s LinkedIn profile sums up her job as managing director at Greenlight: The company “has the insight of a marketing agency, the spirit and optimism of an independent film house, the likability of a golden retriever.”

Driven and dedicated, Gallagher is a frequent flyer, traveling between Greenlight offices in Hartford and Atlanta. Why Atlanta? “They call Atlanta ‘Yallywood,’” Gallagher joked. “There are tons of studios and TV shows filmed there. It is easy to do film work there.”

“Because Annika works so hard to create opportunities for women in golf, it was important for us to create opportunities for women in film,” said Gallagher, who shares credit for the film with the entire production team, including managing producer Staci Green and editor Cathy Honeywell. Jason Cheshire, GO creative director and West Hartford resident, also provided editorial support. 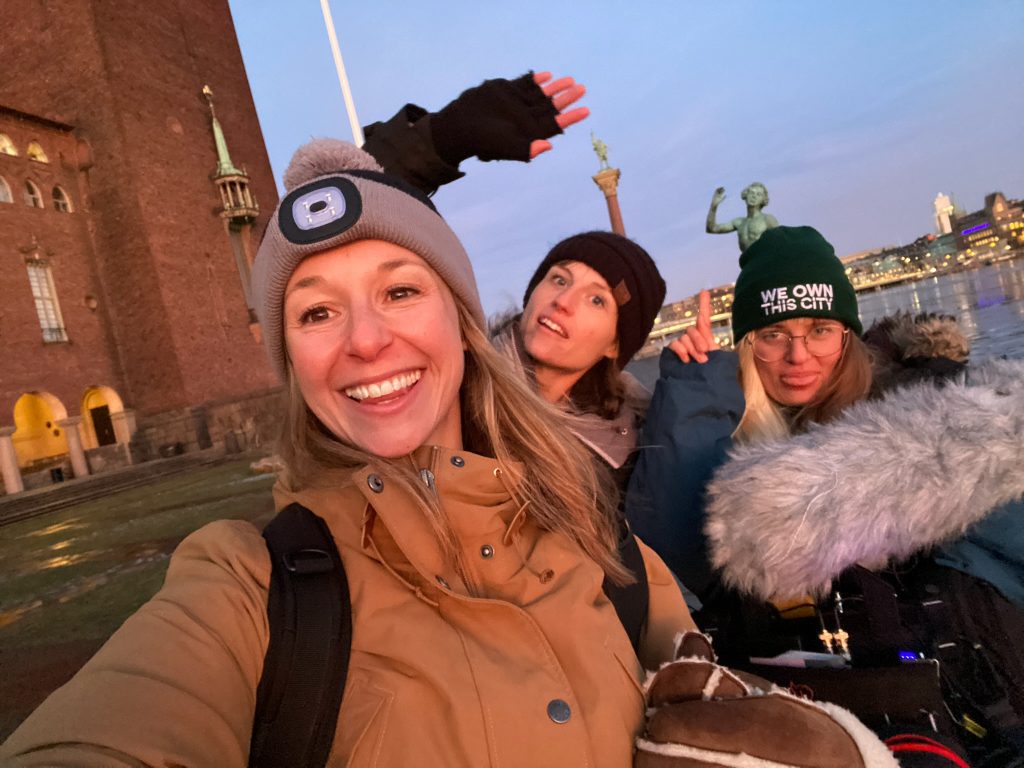 Adrienne Gallagher and some of her all-female crew. Courtesy photo

Hilary Swank was on a list of actresses who expressed interest in documentary work and was attracted to the idea of an all -female film crew. “She was incredible,” enthused Gallagher. “She was down to earth and really good at her job. She made my job easier as she understood my direction.”

The Emmy-award winner believes in the impact of storytelling through video. “We really believe in ‘show, don’t tell’; we meet wonderful people; it is a gift,” Gallagher said in a phone interview from Sarasota, FL, where she flew this week for a benefit event along with her husband Drew, a coordinating producer at ESPN. (The couple met when they both worked at ESPN.) They settled in West Hartford, where they are raising their two sons: Jake, a student at Whiting Lane, and Noah, who attends preschool at Renbrook.

Although golf has been an important part of her career and she points out the golf course has “often been her office,” Gallagher said she is not a golfer.

What’s next for the 38-year-old dynamo? She is hesitant to reveal too much until her deals are finalized but says she has multiple exciting films in negotiations. Stay tuned.

“Becoming ANNIKA” will premiere on Tuesday, May 10, at 9 p.m., on Golf Channel. It will also be shown on NBC on Sunday, June 5, ahead of final round coverage of the 77th U.S. Women’s Open in Southern Pines, NC.