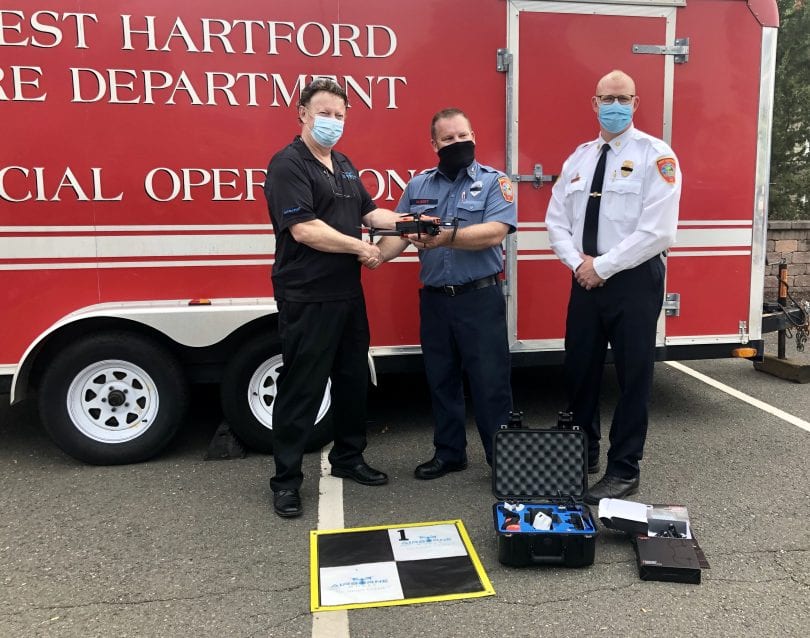 The West Hartford Fire Department is one of 13 public safety organizations to receive a donated drone. 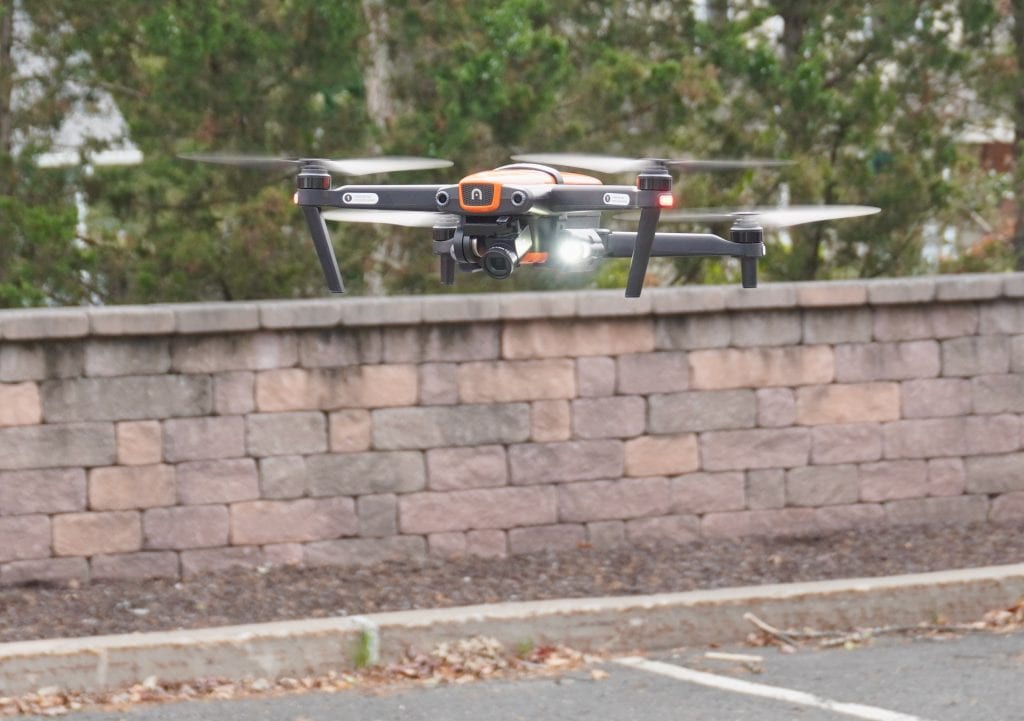 The West Hartford Fire Department’s new Autel Robotics drone had its inaugural flight Thursday afternoon, cruising above the parking lot at Town Hall, deftly dodging trees, taking images of the fire and police department members and media who were in attendance, and then landing exactly on the spot it started.

The drone can take video as well as still photos, has 8X zoom capability, is also equipped with UAV Lighting Technology, will allow the device to be used for night operations. 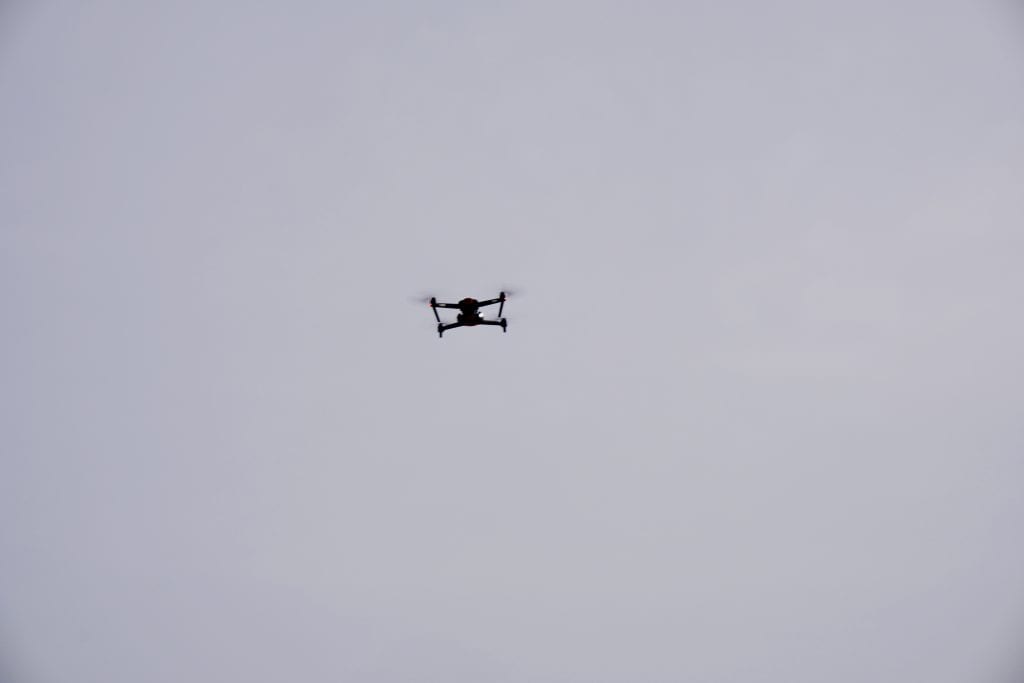 West Hartford Fire Department Capt. Keith Albert applied for the drone donation in late April, through the National Public Safety Drone Donation Program (NPS-DDP.org), a 501(c)(3) nonprofit which was founded by Airborne Works. FoxFury Lighting Solutions has donated the FAA-approved drone lighting with which the drone is equipped.

The West Hartford Fire Department was one of 13 public safety organizations to recently receive a donated drone.

“We started this foundation because … when we talked to public safety organizations many just didn’t have the funding,” Langley said.

Albert previously accompanied Langley to a program on Cape Cod, where he learned how useful drones are at locating lost kayakers. While West Hartford isn’t on the ocean, there are many applications for which the drone will be able to assist both West Hartford’s fire and police departments, public works, and even regional efforts.

In his request for the donation, Albert, who is a member of the Capital Region Haz-Mat Team, noted that the drone could be used to fly over a hazardous area without risking personnel.

“We’ve been wanting a drone mostly so we could recon what’s going on without putting any risk to our members, quickly and efficiently, and get a good size-up of what’s going on so when we put members forward for mitigation they already have a heads-up on what’s going on,” Albert said. 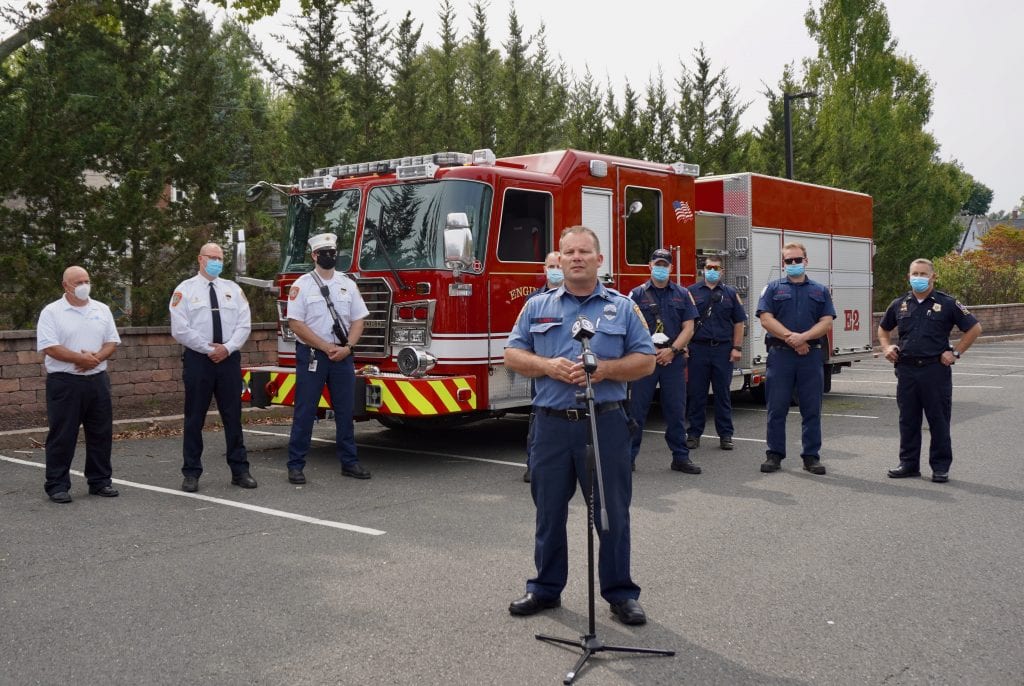 Keith Albert, with members of the West Hartford Fire and Police departments in the background, speaks about why he applied for a donated drone and the uses it will have. Photo credit: Ronni Newton

It could be used to locate lost hikers in the MDC reservoir and to get an overhead view of vehicle crashes or building fires.

The drone would have been very useful in assessing damage from Tropical Storm Isaias, because it could have provided a look at areas that were inaccessible to vehicles due to downed trees and power lines.

“If we had the drone we could have been able to get a better scope of the damage we had. It could broadcast video through WiFi to the chief’s office, it could go to our Emergency Management Center, so you’re not putting people out in the weather, and you’re reducing risk,” Albert said.

The drone can also be used to provide an overview of large gatherings, such as Celebrate! West Hartford, and can assist in determining a more accurate estimate of crowds.

Albert said he is very grateful for the donation and was excited to be accepted for the program. “It’s a huge asset for us. It saves time … and risk to human beings when you send a drone in.”

The drone is equipped with technology, in addition to the lighting, which enhances its use beyond just aerial photography.

Langley said the drone is even able to fly inside buildings, and comes with a kit that pads its propellers for interior use.

“In a tactical situation, a SWAT situation,  you could have this drone in the building and see if someone is darting in or darting out,” Langley said.

The drone is equipped with object avoidance technology – which he demonstrated as it avoided trees in the Town Hall parking lot – but that must be turned off for interior operation, Langley said.

The drone can also be programmed to fly in a grid pattern for search and rescue, and is automatically set to return to its launch site.

Information – photos or videos – obtained from the drone is treated as part of an incident report, Fire Chief Greg Priest said, and subject to HIPAA. The police and fire departments already have in place a “defined process for records release” as well as a policy for use of the drone. 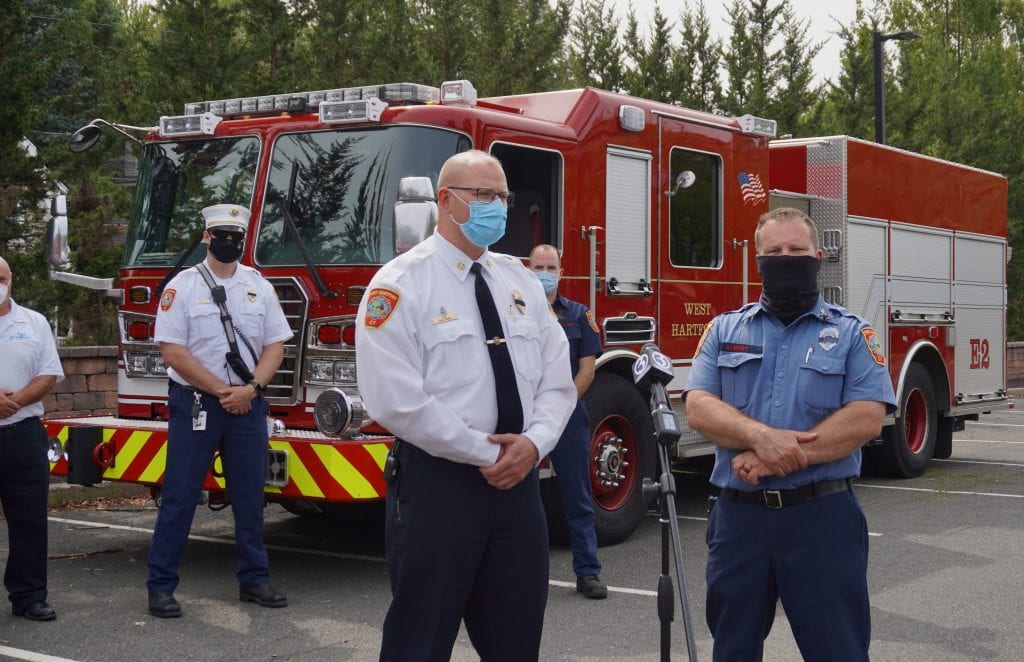 According to Langley, 90-feet over your home is not private property, but West Hartford officials said the intent is not to fly it over private property unless there is a defined reason. Training will be done only over public property such as Town Hall or the Public Works facility.

Video will not retained for any long period of time, unless it’s part of the investigation of a crime, Albert said. The town will be able to use it to create PR videos.

Albert has received his FAA 107 drone pilot license, and there are several members of the fire and police departments who already have the license as well and will be able to operate the drone for public safety purposes. Those who fly drones just as a hobby do not need a license.

The goal of Airborne Works is to help “put eyes in the sky for every department in need,” as well as to provide education to the public and as well as municipalities about the important role that drones equipped with UAV technology can have in public safety.

Priest expressed his appreciation to Airborne Works for the partnership and donation, and to Albert for enabling the department to obtain a useful piece of equipment “to add to our toolbox, a mutual aid asset to our police department.”

Airborne Works has a partnership in place with Amazon Smiles, with 1/2 of 1% going to their foundation for all who are enrolled, at no additional cost to the shopper, Langley said. The program will help fund additional drone donations. 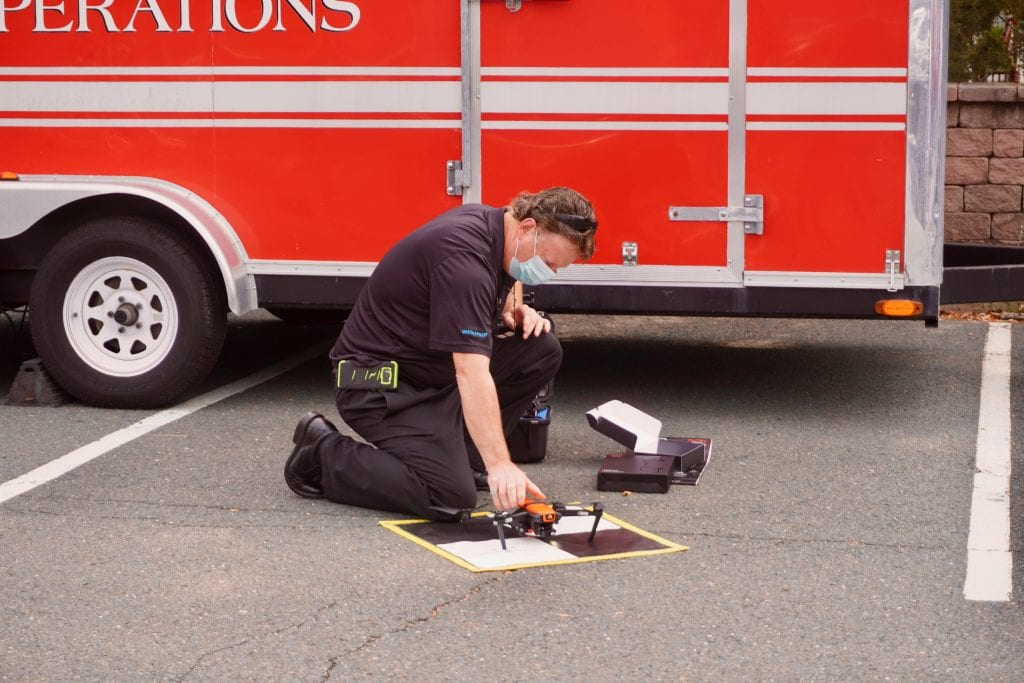 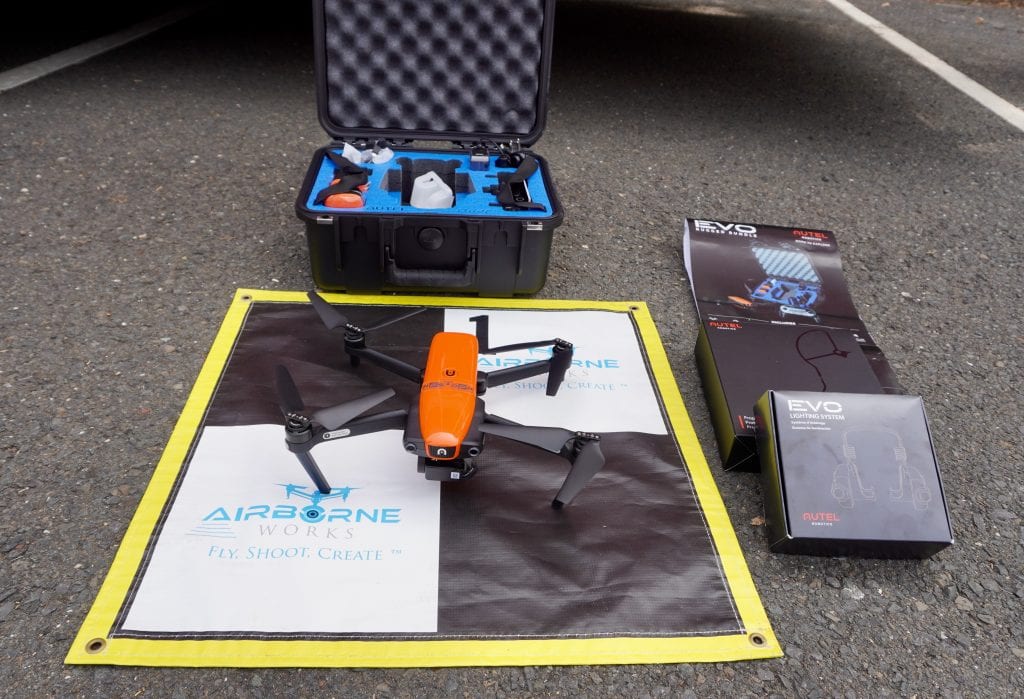 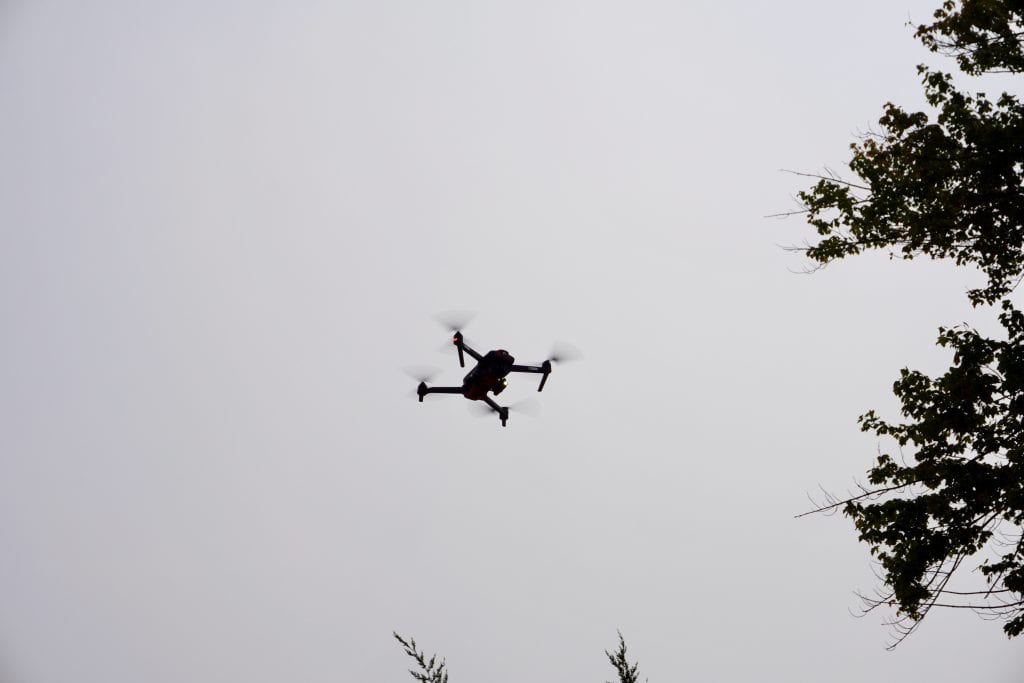 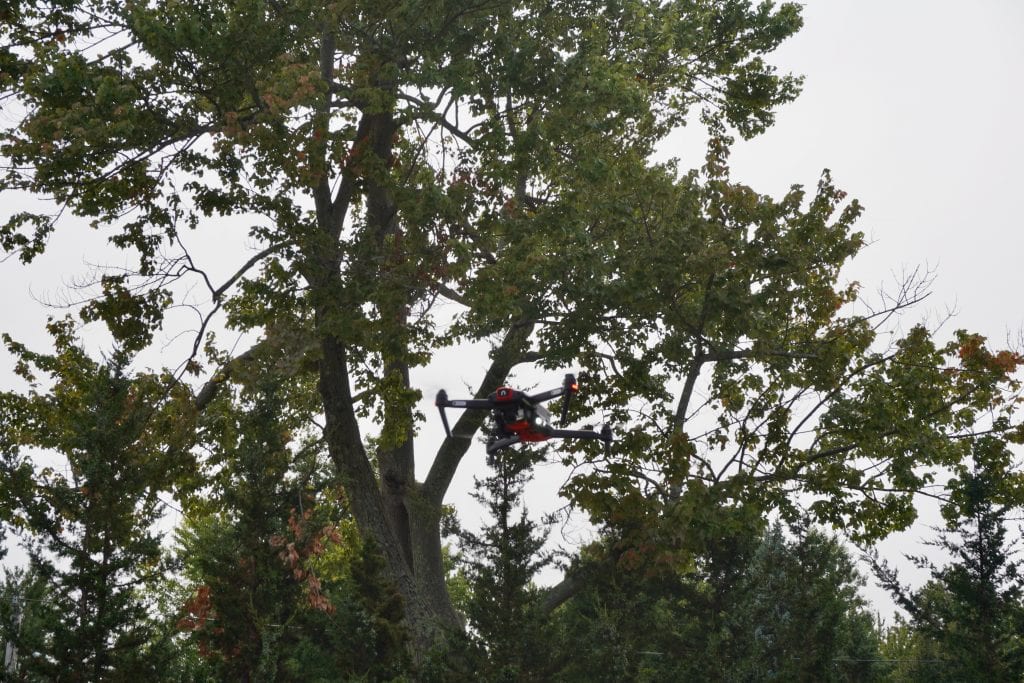 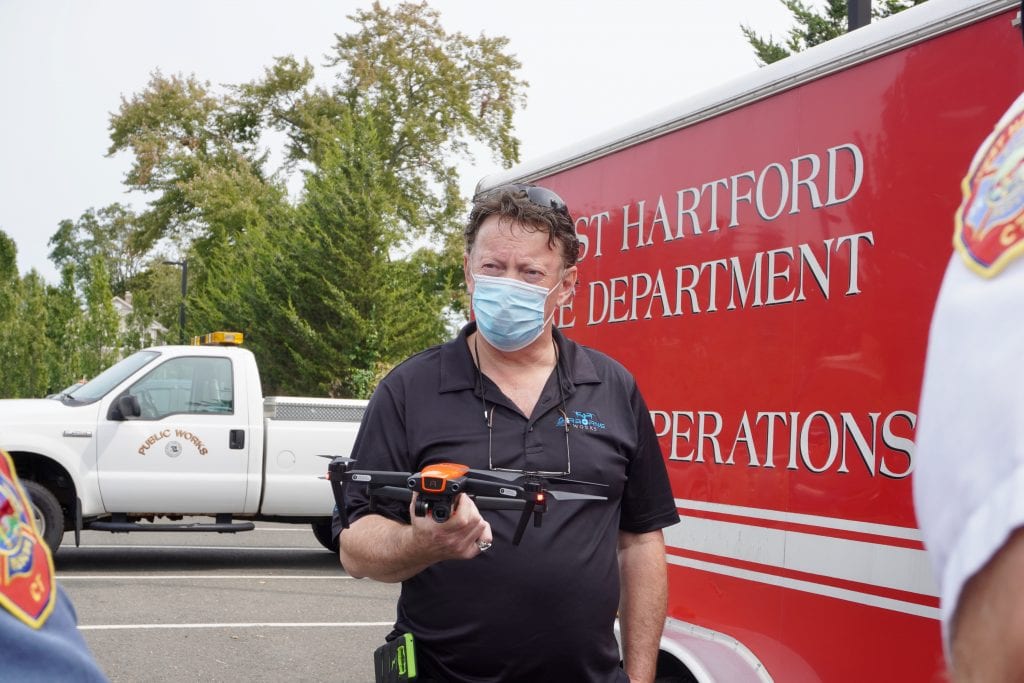