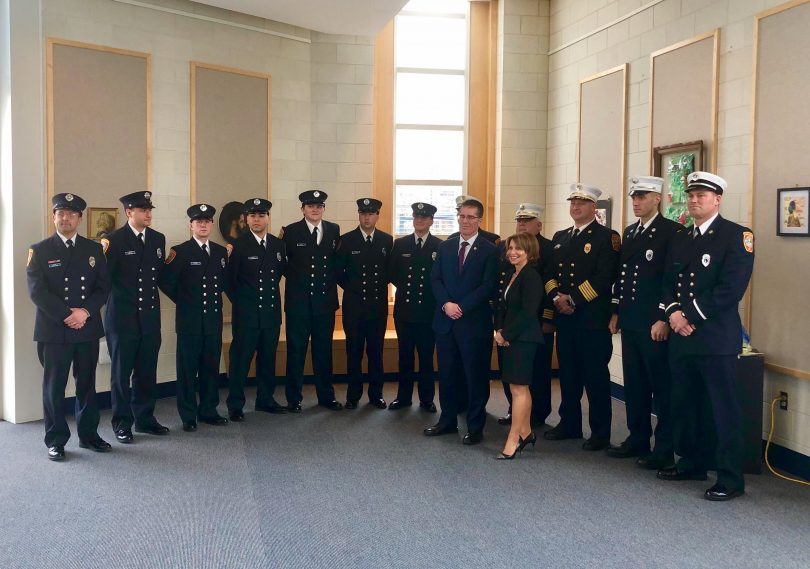 Six cadets graduated from the Hartford Fire Academy on Jan. 11, and two others have been hired from other departments.

“This is an exciting time for the West Hartford Fire Department. The last year has seen a significant amount of personnel turnover as a result of retirements,” said Chief Greg Priest.

“This is the first time that West Hartford has sent anyone to the fire academy,” Priest said. In the past, the department has hired new members who have already received training as firefighters, but he said that it’s more difficult to find people who are already dual certified as paramedics as well as firefighters.

The West Hartford Fire Department took over the advanced life support (ALS) role when it launched the paramedic program in August 2016.

“It was a great regional collaboration,” Priest said. For West Hartford, the option to participate in Hartford’s program was convenient and economical, and it avoided a long wait for the next program to begin at the Connecticut Fire Academy, which would have been the other option.

“They are very well trained, and we are very pleased,” Priest said.

Following graduation, the new hires will spend several weeks under the direction of their training officer, Battalion Chief Keith Byrne, becoming familiar with and acclimated to procedures within the West Hartford Fire Department. “Keith is a great guy, and very dedicated,” Priest said, and has been involved with the new hires throughout their training.

Andrew Slicer and Victoire Will, who were hired with experience as both paramedics and firefighters and did not need to attend the academy, will also spend several weeks under Byrne’s direction, learning the West Hartford Fire Department’s procedures.

Priest shared bios of the new hires with We-Ha.com.

Cintron, 25, is a native of Waterbury – and said in his bio that staying on “the right path” was a challenge.

“A desire to help others is why I entered this field and what keeps me going,” said Cintron. He is thankful to his fiancé, Shannon, and daughter Aria, for their encouragement.

Howard relocated to the Hartford area from Hudson Valley, NY, and has been working in the EMS field for a decade, most recently for the City of Hartford. He now lives in Manchester with his wife and four children, and said he is very much looking forward to his career with the West Hartford Fire Department.

McConville joined the Bolton Volunteer Fire Department when he was 18, and has been a paramedic since 2011. He is an avid runner who is training to run a half marathon next year, and lives in Coventry with his wife and their 5-year-old son and 2-year-old daughter.

Powell is a native of England, and moved to the U.S. when he was 13. He became a lifeguard at age 15, and while working at Squantz Pond State Park was involved in multiple rescues which led to his choice of a career in emergency service.

Powell started off as a volunteer with the New Fairfield Volunteer Fire Department, and has also worked for the Danbury Ambulance Service, as the Newtown paramedic liaison, for Emergency Resource Management, Bristol Hospital EMS, and for Valley Emergency Medical Services. Powell attended Western Connecticut State University, where he met his wife.

Slater has been a volunteer firefighter in Farmington, and has spent the past seven years working American Medical Response. He and his wife, Patricia, have two dogs.

Teiger is a native of West Hartford, who has a bachelor’s degree in psychology from George Washington University. He said he was inspired to become a firefighter/paramedic by observing the work of the UConn Health Center fire department.

Teiger has worked in the emergency medical services field for the past eight years, and currently lives in Southington.

Slicer, one of two new hires who is already trained as a firefighter, has been involved in emergency medical services since he joined the Ellington Volunteer Ambulance Corps at age 15. He is a registered nurse as well as a paramedic, and worked at Manchester Memorial Hospital for three years.

Slicer is recently married to Annalise, and they have a rescue dog named Molly.

Will lives in South Windsor. She got married in May 2018, and her husband, Ryan, is a firefighter/paramedic with the Manchester Fire Department but is currently deployed as a flight paramedic in Syria. She has a 10-year-old daughter.

Will said that she has lived in Connecticut for the past seven years, was born in Hawaii, grew up in southern California, and also spent time living with her grandmother in Belgium. She moved to Connecticut because her father was ill, and was convicted to stay.

Will has work as a dog trainer, an EMT, and as a combat medic in the Army National Guard, where she’s currently a staff sergeant based in Niantic. Since obtaining her paramedic license, she has worked for Danbury Hospital EMS, AMR Hartford, and most recently for the West Haven Fire Department – where she was their first female firefighter.

“The department continues to maintain a high level of fire and rescue services to the town while also maturing its paramedic program, currently in its second full year of existence,” said Priest.

“These new members are all coming with varying backgrounds but all are currently licensed paramedics. I am proud of those who just graduated the intensive fire academy and look forward to all of them bringing their backgrounds, perspectives, and work ethic into our ever-changing department.”