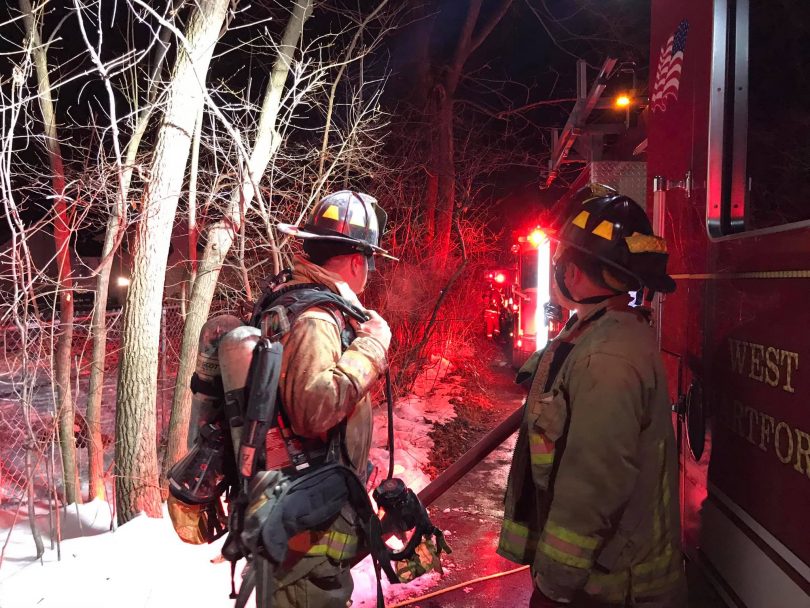 All five companies on duty responded to the scene of a house fire Thursday night on King Philip Drive in West Hartford.

Firefighters battled icy conditions at a home at the end of a long driveway Thursday night, but officials said the fire was brought under control in about 25 minutes and there were no injuries.

Crews arrived at 83R King Philip Dr. in West Hartford Thursday night to find a heavy volume of fire coming from the attached garage and back of a single-family ranch-style home located on a rear lot at the end of a long driveway, Assistant Chief Hugh O’Callaghan said.

A call was received at West Hartford’s Emergency Dispatch Center at 7:16 p.m., and the first unit arrived on the scene at 7:19 p.m., he said.

Police officers were already on the scene and were walking two occupants of the home down the driveway when firefighters arrived, O’Callaghan said.

Information about the ages of the occupants was not available, but he said there were no children involved, and no pets in the home.

O’Callaghan said crews immediately stretched two handline to attack the fire while other companies used multiple ladders to conduct a primary search for victims, and confirmed there were no other occupants in the house.

All five West Hartford companies, Battalion Chief Mark Bassett, and Chief Greg Priest also responded to the blaze, with all 21 firefighters on duty at the scene, O’Callaghan said. Two off-duty companies were called in to staff the town during the operation, and the Hartford Fire Department provided mutual aid as well.

The cause of the fire is under investigation, and crews remained on the scene late Thursday night.

The home is not currently habitable, O’Callaghan said, and the Red Cross Cross is assisting the residents.