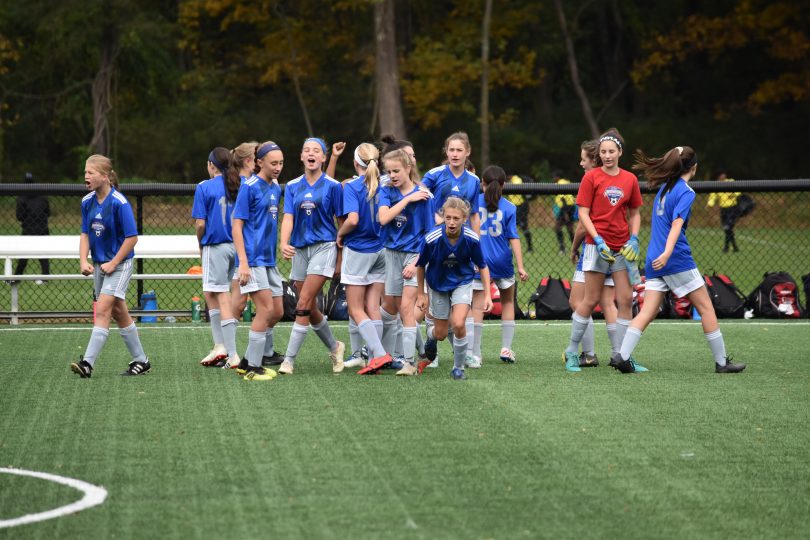 The West Hartford Girls 14U team has been playing premier teams and winning, and their coach said the most important factor in their success is the team culture. 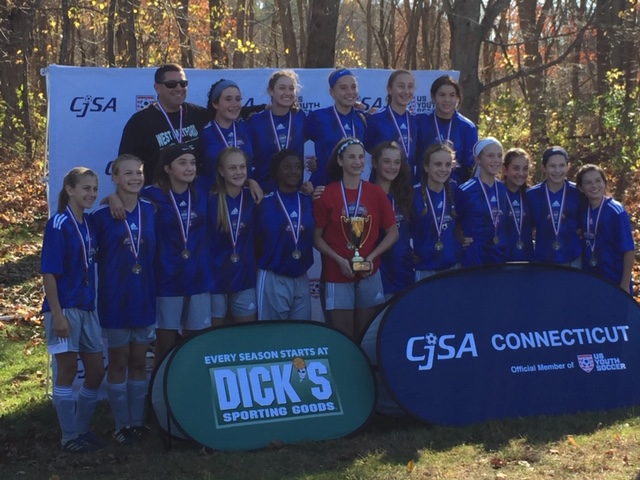 West Hartford Girls 14U after winning the Connecticut Cup in November 2019. Submitted photo

As the representative for Connecticut, West Hartford will play the other state champions in the region, with the winner headed to Las Vegas for the National Championship in July.

Over the past several years, this girls team has cemented themselves as one of the top teams in the region, amassing a 71-8-9 record. Coach PJ Louis, a West Hartford resident who also assists the Kingswood Oxford mens varsity program, said the success of the team all began years ago. “Over the years the girls have continued to improve and taken big steps in their tactical and technical abilities, but the no. 1 driver in success is the team culture,” Louis said.

Louis has coached the team for five years, and said as rosters have turned over year to year, the team has improved each season.

“Each season we focus on one certain theme while always working on technical abilities.” Louis said. “During the season we do numerous things on and off the field to build the culture with players and families. From water balloon fights, cookouts, pizza and ice cream parties, joke telling and team building events, the focus was always to build each player not only to be a better player, but a good teammate and person for future success.”

Louis, a former college and professional player added, “Of all the teams I have been around, this team is one of the most bonded and connected groups I have ever seen. Don’t get me wrong, this team can flat out play too … we started a game at FSA this past year with 11 straight passes without giving up possession, which caught the attention of other coaches watching. It was impressive! However, it is all ‘starts with the team culture’ and an extremally competitive atmosphere the girls push themselves in each day.”

Louis continued, adding, “We set goals, hold each other accountable and push each other in practice every day. Sometimes I don’t even have to say anything, but players will dictate the tone of a practice. It’s impressive to see them really push each other. It’s a special group and impressive to watch them work so hard and stay such great friends.”

While practices can be extremely competitive and organized, they are also fun and focused on improving each player and the team. One player said, “Music is always playing at our practices and we get to have fun while working really hard. We play ‘World Cup’ and ‘Muppet’ each week and sometimes I can’t believe practice is over so quickly.”

Louis added, “Each player on certain days has had to stand up and say jokes, run warmups and discuss leadership roles at school or after school activities to improve leadership skills. They are impressive, always make me laugh, but ‘Muppet’ can be hilarious, and players love it.”

While some towns allow players to play on multiple teams, West Hartford Travel Soccer decided that when players turned 13, girls wouldn’t be allowed to double roster, enabling players to get more playing time and build on the team concept. “This made a big impact on our team, as a lot of our girls played on other local premier teams, the ones who stayed with West Hartford enabled us to have consistency and really build a true team,” said Louis.

After going undefeated in the top division of Connecticut Junior Soccer Association travel league four times and winning multiple tournaments around New England, Louis decided to make a big change in 2018. West Hartford joined a state-wide premier soccer league, the only town at the time doing so, playing private premier clubs around the state.

“This enabled us to play better competition on a week-to-week basis,” Louis said. “The players really needed this to be prepared to play in high-school. It enabled the whole team to play premier clubs and get similar exposure.”

The parents welcomed the better competition even if it meant more travel, and girls responded by playing better and better each week. “We can’t get away with a sloppy first touch, or not make good passes anymore,” one player added.

While playing better competition, West Hartford had winning records, beating some national premier league teams and qualifying for other premier tournaments. Another played said, “We became much better defensively and now we know; one mistake can mean the difference in winning or losing.”

Last year the team headed to Cape Cod, where they beat two premier clubs from Massachusetts to win the tournament, but more importantly had a great team experience. “We had cookouts, played in the pool, went to the beach and went bridge jumping … it was such a fun trip!” added a player.

Louis credits the Cape Cod trip for spring-boarding the club into a hugely successful 2019 fall season. “They probably won’t remember winning the tournament when they are older, but they will remember the fun they had together as a team.”

This coming spring the team should have a wonderful send-off in its final season together before players head off to high school.

“Many of these girls will help their respected high schools immediately in their freshman year and years to come. … I just wish I could keep them all together at one school in town and win a state championship, but for now a national championship will do,” Louis joked. “But no matter what happens this spring I am extremely proud of each and every player and know they all will have successful futures on and off the field.”