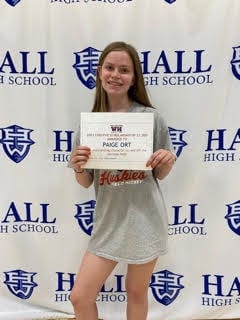 West Hartford Girls Lacrosse is pleased to announce that Paige Ort has been selected as our 2021 scholarship winner.

Paige graduated from Hall High School in June and will attend Clemson University in the fall.

She played in West Hartford Girls Lacrosse from 2011-2017, and after her graduation from recreational lacrosse, Paige played high school lacrosse for all four years.

In her application essay, Paige stated that that she has fond memories of water balloons at lacrosse practice on hot days, carpooling to Jamborees, and supporting her teammates when their opponents were mean. Paige became a goalie and started on the Hall freshman and JV team.

As a senior, Paige was challenged for the starting varsity goalie position by a sophomore. When Paige’s coach approached her to explain that she may not start, Paige responded, “Coach, I will be fine with whatever is best for the team.”

In her recommendation letter for the scholarship,  Hall Coach Meg Chaplin wrote, “Paige demonstrates love of the sport and team, respect for teammates and coaches, persistence and dedication.”

Outside of lacrosse, Paige is a volunteer at Unified Theater, which brings together kids with and without disabilities to write and put on a theater production. Paige has been a producer, director, and inclusion specialist.

Congratulations Paige!  We are honored to present you with our $1,000 scholarship.