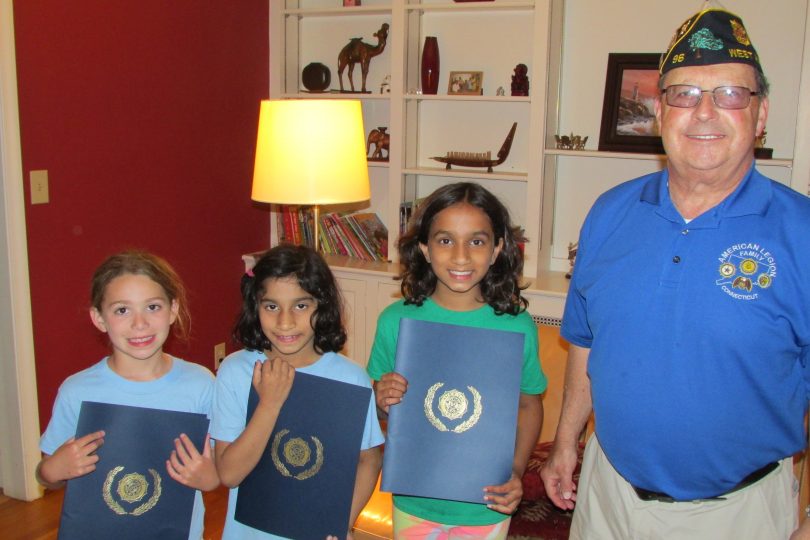 Three West Hartford elementary school students had a lemonade stand on the Fourth of July to honor America and the country’s veterans, and were recognized by the American Legion Hayes-Velhage Post 96 for their efforts.

On July 4, 2017, three elementary-aged young West Hartford girls opened a lemonade stand to raise money to donate in honor of our veterans.

Tanya Mene, Divya Mene, and Sophia Schaner decided that the day our nation celebrates its birthday would be an excellent opportunity to hold a fundraiser to donate to a veteran’s organization.

After a successful day of selling lemonade their mother reached out to American Legion Hayes-Velhage Post 96 for suggestions on where their donation could be sent. Post 96 suggested that the new Fisher House Connecticut, which held its ground breaking on April 11, 2017, would be an excellent veterans program to consider.

The Fisher House Foundation builds and maintains long term residential facilities near military hospitals nationwide. The families of seriously injured soldiers need a place to stay during the long rehabilitation process and Fisher House provides that service at no cost to families. Currently there are 54 Fisher Houses nationwide. Since 1990 they have provided services to over 142,000 military families who have stayed more than 3.6 million days supporting their soldier during rehabilitation.

On July 11, Hayes-Velhage Post 96 Commander Jeffrey Cole presented each girl with a Certificate of Appreciation in recognition of their efforts and support of veterans.

The American Legion was founded in 1919 on the Four Pillars of a Strong National Security, Veterans Affairs, Americanism, and Youth Programs. With a current membership of over 2 million wartime veterans, Legionnaires work for the betterment of their communities through more than 14,000 posts across the nation. The American Legion Hayes-Velhage Post 96 of West Hartford has been serving our veterans and the community for 95 years. Further information is available on the Post’s website at www.post96.org or phone the Post at 860-233-9029.