The Town of West Hartford now has until June 17 to decide if it wants to purchase the campus for $12.6 million. 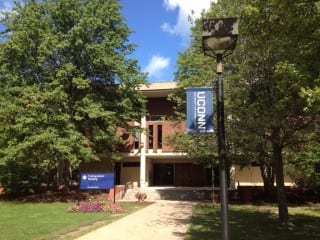 The Town of West Hartford now has until June 17, 2016, to decide whether or not to purchase the property and buildings on the UConn West Hartford campus. Photo credit: Ronni Newton (file photo)

The University of Connecticut has granted the Town of West Hartford an extension of time to exercise its right of refusal to purchase the West Hartford campus, with the date for that decision moved from May 14 to June 17.

A public information session will be held on Monday, May 2, and Town Manager Ron Van Winkle said that he expects a large turnout of residents. Van Winkle said he sent a letter to UConn Vice President and General Counsel Richard Orr on Friday, April 29, requesting the extension of time.

“Over the past several weeks the Town’s residents have become increasingly aware of WEG’s [Weiming Education Group’s] interest in the property,” Van Winkle wrote in the letter. “Under the circumstances I believe it would be to everyone’s benefit to have additional time to consider the public’s input regarding whether the Town should purchase the property,” he stated.

Orr responded with a letter dated May 2, granting the extension. If the town does not exercise its right to purchase the property by close of business on June 17, UConn will be able to sell it to Weiming Education Group, but the University has agreed “not to exercise a binding agreement for the sale of the campus to any other buyer prior to that date.”

Van Winkle said part of the impetus for sending the letter on Friday was in parat a disagreement  between the town and UConn about the May 14 deadline, which according to the University was triggered by a non-binding letter of intent. The town maintained that document was not sufficient to trigger the 45-day period.

If the May 14 date held, Van Winkle said the decision would have to be made in time for the Town Council to vote at its May 10 meeting.

Van Winkle said that the Town Council now has until its June 14 meeting. “That’s the last possible time to make the decision, and by then we should have completely vetted public opinion,” he said.

“It’s not a small decision,” Van Winkle said. If the town purchases the property, the likely scenario would be issuance of $12.6 million in 15-year bonds, a cost that would add up. “It’s a lot of money for West Hartford,” he said.

“We don’t have any particular use for the buildings, but this will give the Council time to think about the purchase and use,” said Van Winkle.

In the letter of extension, Orr also outlined an alternative proposal for West Hartford should the town decide to purchase the property for $12.6 million. In that proposal, which West Hartford will be considering, “The Town would have a binding agreement to acquire the campus so the Town, not UConn, will decide the ultimate user.”

The proposal would allow West Hartford to then have “18 months to keep the campus for its own use or sell it to a private buyer.” Although the Town will need to make a deposit, the majority of the payment will be deferred until the fall of 2017. If West Hartford sells the parcel to another party, that buyer could pay UConn directly, according to the alternative proposal outlined in Orr’s letter.

The Town will also have the “absolute right to retain the Little League fields” on the southeast portion of the campus.

Van Winkle said that during the May 2 meeting, he will outline possibilities for the property under the alternative proposal, including the possibility of subdividing the 58-acre parcel. One important factor to consider is that if the Town finances the purchase through tax-exempt bonds, the use of the property must be for tax-exempt purposes.

If the town does not purchase the property, the question of whether or not Weiming Education Group is a “fit” buyer is UConn’s decision to make from a financial perspective, Van Winkle said. As for the interface with West Hartford Public Schools, that’s something for the Board of Education to consider.

“Weiming does not have to go to West Hartford Public Schools. Others are asking,” Van Winkle said.

The Children’s Museum has previously expressed a desire to move to the UConn property, but the cost of that move would be between $15 and $20 million.