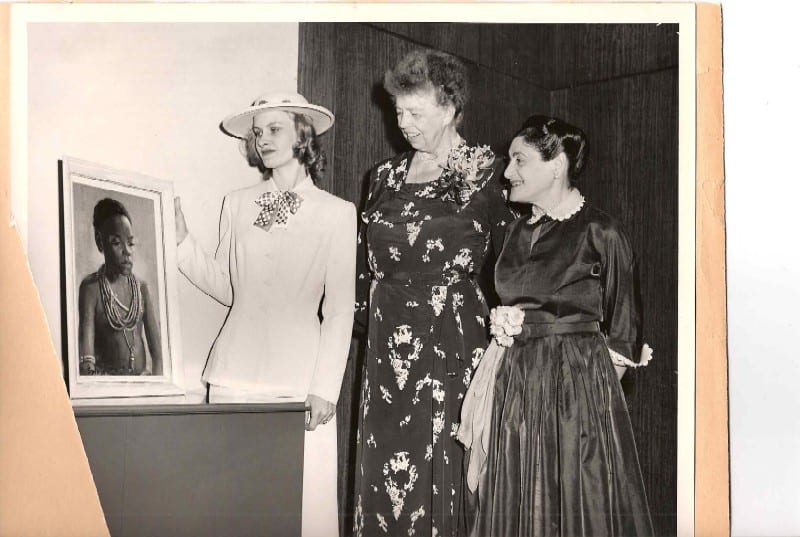 The Noah Webster House & West Hartford Historical Society is co-sponsor of the lecuture on the surprising friendship between Beatrice Fox Auerbach and Eleanor Roosevelt.

The lecture, which will include a wine reception, will be held at the Connecticut Historical Society, One Elizabeth St., Hartford, CT 06105.

From 1946 to 1962, the First Lady of the United States, Eleanor Roosevelt, and the First Lady of Hartford, Beatrice Fox Auerbach, developed a friendship that resonated with visits, letters, and advice. Find out more about the women on whose shoulders we stand today as Dr. Wilson chronicles how these two female leaders interacted in the 1950s and 1960s.  Some of the correspondence between Roosevelt and Auerbach that is in in the collection of the Connecticut Historical Society will be on display.

In one letter from February 1951, Eleanor Roosevelt wrote to Beatrice Fox Auerbach to tell her about a young Australian artist named Sylvia Davis Patricelli. As a result, G. Fox & Company sponsored an exhibit of Patricelli’s work that was opened by Roosevelt the same year. Later, Patricelli painted portraits of both Roosevelt and Auerbach. The Patricelli painting of Eleanor Roosevelt will be brought out of private collection and displayed the night of the lecture. Patricelli’s self-portrait, in the collection of the Noah Webster House & West Hartford Historical Society, and a copy of the portrait of Beatrice Fox Auerbach will also be on display. The artist’s daughter, Susan Regan, will be in attendance to recall her memory of her mother’s portrait painting sessions at Auerfarm.

Tickets are $5.00 for Connecticut Historical Society and Noah Webster House & West Hartford Historical Society members and $10.00 for the general public. Reservations are requested and can be made by calling (860) 236-5621 x 238 or emailing [email protected].

The Connecticut Historical Society (www.CHS.org) is a private, not-for- profit museum, library, research and educational center. Founded in 1825, the CHS is one of the oldest state-level historical societies in the nation. The mission is to inspire and foster a life-long interest in history. To accomplish that purpose, CHS collects and preserves material (books, documents, images, and artifacts) related to Connecticut’s social, cultural, and family history and makes those materials available for public education and use onsite at its building on Elizabeth Street in Hartford, off-site at other locations, and online.

The Noah Webster House & West Hartford Historical Society is a cultural destination where citizens can learn to understand and appreciate the past. The museum preserves the birthplace of Noah Webster, the founding father, educator, author, and lexicographer who taught generations of Americans what it means to be American. This National Historic Landmark is also a repository for West Hartford’s history, the community that molded Noah Webster’s future, and is still thriving over 250 years later. The historic house and exhibit spaces are open daily from 1 p.m. until 4 p.m. For information on the museum’s extensive school and public programs, please visit www.noahwebsterhouse.org or call (860) 521-5362.