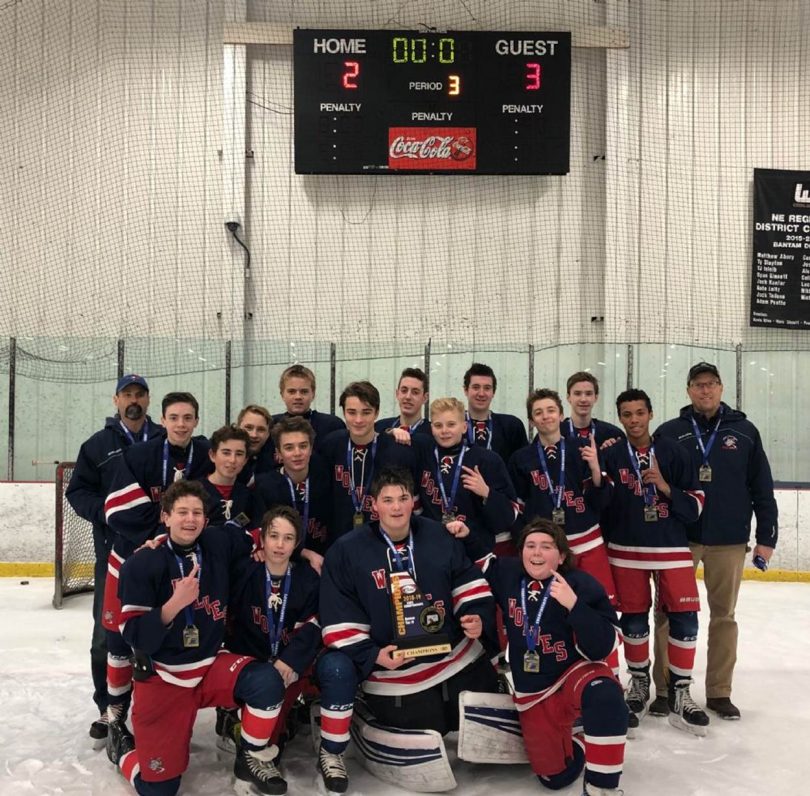 The West Hartford Wolves Bantam A team won the state championship, hanging on for a 3-2 victory over ECHO A.

The West Hartford Bantam A team started off their CHC Tier IV State tournament on Feb. 28 in Cromwell, CT, as the No. 3 seed out of 12 teams. The Wolves rattled off three consecutive victories in pool play, beating Watertown A1 5-1, Greenwich Skate A1 4-2, and the Whalers A 5-2 before advancing to the quarterfinals.

The Wolves played well in a 4-0 rout of the Greenwich Blues, advancing to the semifinals the next day.

The Wolves played Yale A for their semifinal game – a team against whom they had a 1-1 record during the season. The Bulldogs swung an avalanche of momentum in their favor by storming back from a 3-1 third period deficit to take a 4-3 lead with nine minutes remaining. But the resilient Wolves fought back and a wicked snap shot from Keegan Bankoff from the blueline with traffic in front of the goalie tied the game up with eight minutes left. With four minutes remaining, Aiden Shaughnessy flicked an aerial pass to the front of the net where a streaking Aidan Adams swatted it out of mid-air and into the top corner to secure a 5-4 victory.

The victory over Yale gave the Wolves a 5-0 tournament record and sent the Wolves to the Championship game, originally scheduled for Sunday night, March 3.

However, the Wolves would have to hibernate as the Championship was pushed back six days to allow the other quarterfinals and the semifinal to be played. As expected, ECHO A advanced to the Championship. ECHO (from the Eastern Connecticut Hockey Organization that includes Bolton, Coventry, Manchester, Rockville, Tolland, Vernon, Ellington, Colchester, Andover, Columbia, and some other adjoining towns) was a formidable opponent, also 5-0 in the tournament – and had beaten the Wolves in both regular season meetings.

On Saturday morning, March 9, the puck dropped for the Championship game on the lower rink of Cromwell. Despite the location, it felt like a home game for the Wolves, as a large contingent of WHYHA fans packed the rafters.

The game played out early as expected – ECHO is a well-coached, physical team not afraid to mix it up all over the ice in an effort to slow down their opponents. Coaches Miller and Roux knew this and had the boys ready.

After a very early penalty kill, Owen Miller sent a pass to Griffin O’Shaughnessy, who started the scoring for the Wolves when his wrist shot trickled through the goaltender for an early 1-0 lead five minutes in. ECHO tied the game shortly thereafter on a deflection and then took a 2-1 lead on the power play with two minutes left in the first.

Despite being called for the first five penalties in the game, including a two-man disadvantage of over one minute, the Wolves kept grinding. After returning to even strength, Brian Fehl received a beautiful saucer pass from Luke Roux and made no mistake on the breakaway, tying the game at 2-2 early in the second period. The remainder of the second period was a penalty-fest, as ECHO took four penalties and the Wolves two.

Late in the second, with the Wolves enjoying a four-on-three skater advantage, Sam Heller centered a pass to Aiden Shaughnessy who deflected the puck past the ECHO goalie for a 3-2 lead.

The third period saw several scoring chances for both teams. The ECHO goalie was solid, but not as spectacular as Wolves goalie Luke Nordstrom, who stoned an ECHO forward on a clear breakaway with seven minutes left.

The Wolves defense held strong for the remainder of the game, with Keegan Bankoff pinning the puck against the boards behind the Wolves’ net for the last 10 seconds to seal the win, despite being pummeled by ECHO players desperate to pry it loose. As the buzzer sounded, the Wolves stormed the ice to celebrate their 3-2 victory!

For the second-year Bantams (birth year 2004, including seven players who started together at the Squirt C level in 2013-14), this title capped a memorable six years of travel hockey with their first state championship. For the Wolves’ first-year Bantams (birth year 2005), this win meant back-to-back Tier IV State Championships, as they were Pee-Wee champs in 2017-18.