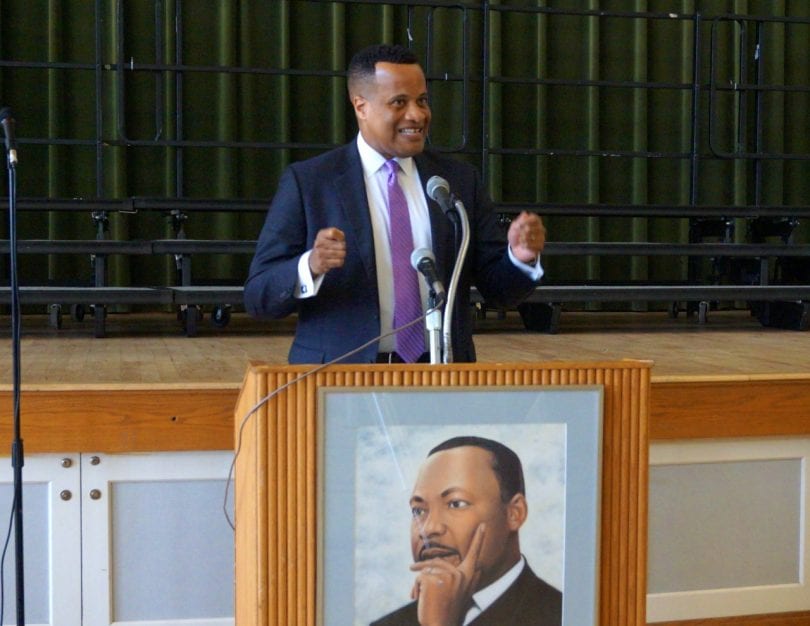 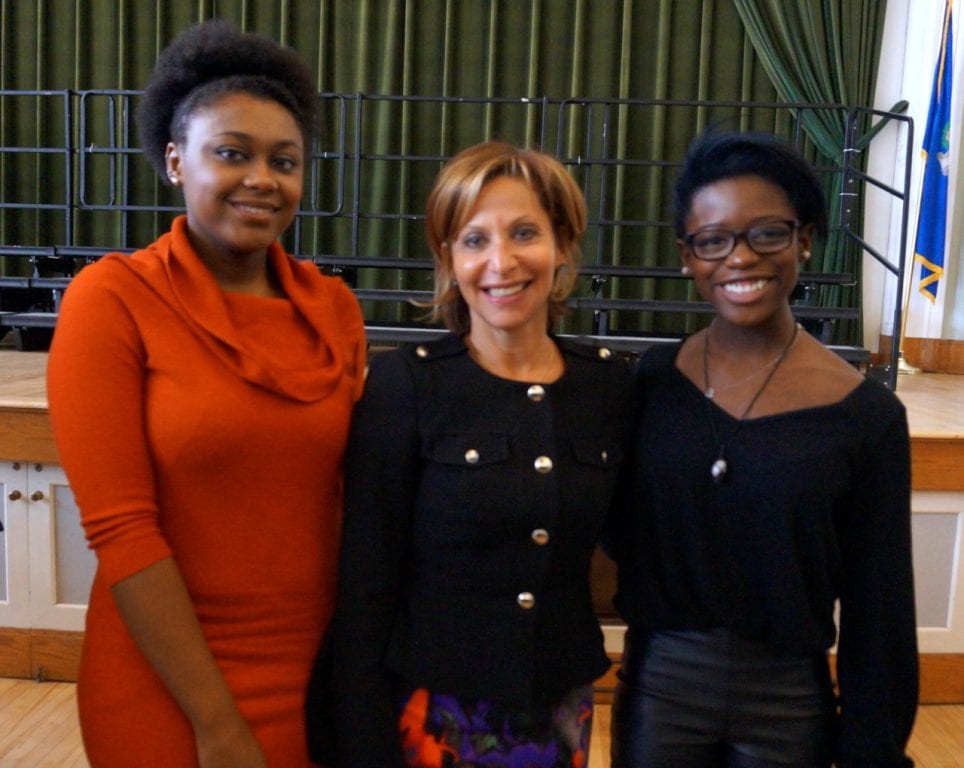 Dr. Martin Luther King Jr. had a dream, and his inspiring words from a half-century ago maintain their relevance today in the messages shared at West Hartford Town Hall Monday morning as the community came together for the 22nd annual celebration of the esteemed civil rights leader.

“Thank you all for joining us today to mark Martin Luther King Jr’s birthday in a meaningful, enlightening, and enriching way,” Cantor said to the audience. “You are here because you believe that you can make a difference.”

In the audience, Cantor noted, was Rabbi Stanley Kessler, the founding spiritual leader and rabbi emeritus of Beth El Synagogue. Kessler, who participated in a discussion after the celebration, was among the first group of organized clergy to join King in Birmingham, AL, and was present at his “I Have a Dream” speech in Washington, D.C. “They understood what Dr. King said, life’s most persistent, urgent question is ‘What are you doing for others?'” Cantor said.

“History has shown what the cost of silence is,” Cantor said. 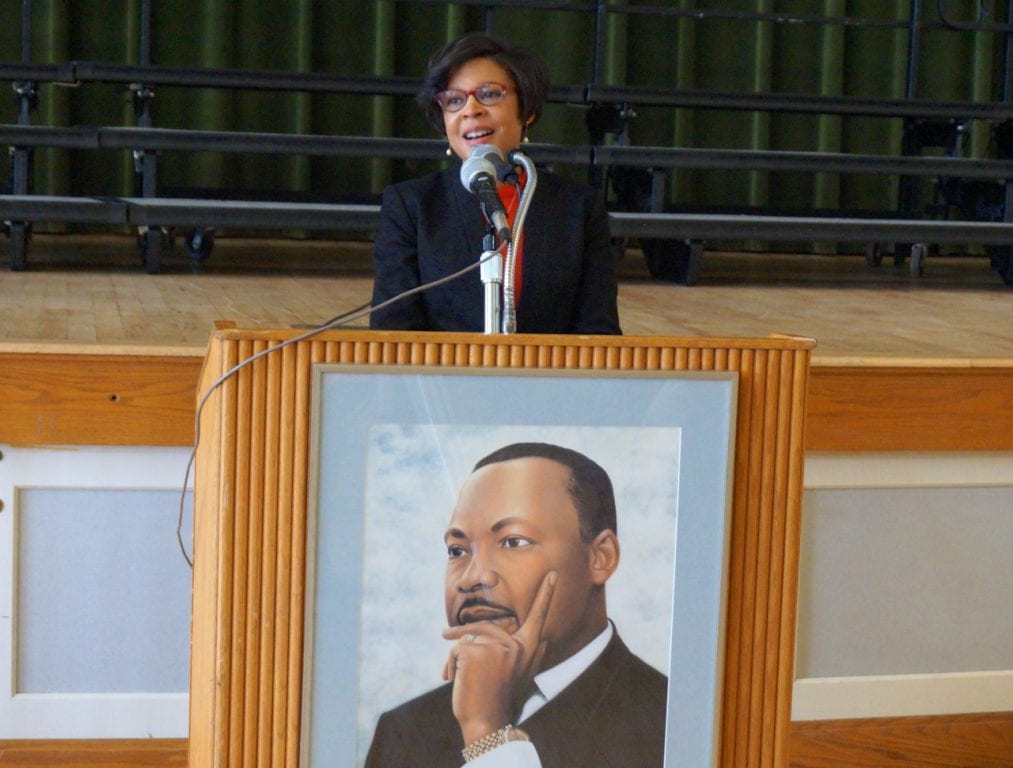 Tammy Exum, a former member of the West Hartford Board of Education, served as emcee for the program.

Exum has lived in West Hartford since 1999, but grew up in North Carolina. She said that when she was getting ready to start kindergarten, it was the first year that black and white students could be in school together.

“It was the start of integration,” Exum recalled. Her mother tried to explain “race” to her, and she asked how fast the white students could run. “For me race represented a running race,” Exum said. She had no concept of different races.

By third grade, however, she was very aware of race, and said that King’s “I Have a Dream” speech, which was framed in her home, would make her cry.

King wanted his four children to be judged by who they were rather than the color of their skin. “This has to be a dream … that should be a reality,” Exum said.

As a student at the University of North Carolina at Greensboro, Exum said that she was thrilled when Martin Luther King Day became a holiday, but dismayed that there was no celebration, so she joined other students to compel the administration to turn it into an event. She said she is so happy to be part of a community like West Hartford which is celebrating Martin Luther King Day for the 22nd time.

“Saddled by the politics of fear and division, Dr. King’s fierce urgency of now is more relevant than ever,” she said. “We trust that the bright tomorrow’s of justice will give way to a day where all God’s children are loved truly by the content of their character and not the color of their skin.”

Student speakers are traditionally one of the highlights of West Hartford’s Martin Luther King Day celebration, and this year’s chosen presenters provided powerful messages about how King’s teachings relate to and have influenced their lives.

Grace Evans, a junior at Conard High School, told the audience that she was born in California, moved to Minnesota at age 3, and then moved to Sao Paulo, Brazil, when she was in fifth grade. No one had heard of Minnesota, so she told people she came from California.

Evans stood out as different in Brazil, she said, for many reasons.

“For me, finding my identity became like a mission in a video game. What was originally, ‘Where are you from?’ became ‘Who are you?'” Evans said. “This was especially amplified in the environment I had found myself in while living in Brazil. I was not only the only black person in my school and in my apartment complex, I was the only American as well.”

She attended a British school where English was spoken in the classroom but outside the classroom everyone spoke their native language.

“Where in many of our American schools, cliques are equally as defined, the often instead stem from socioeconomic background, race or ethnicity, or interests, among other things. There, the separation was by language. Imagine my surprise when the bell rang and everyone ran off to their respective groups, abandoning the English language I knew so well. Not only was I the only black person, or the only American, now, I was the only person in the entire school who only spoke one language, and I believe that was the most excluding principle of everything I had experienced in my first year in Brazil,” Evans said.

She adapted, learning Portuguese in school, and when that wasn’t enough to make her feel she fit in with one of the groups, she taught herself Spanish.

“Martin Luther King was one of the pioneers in the black community, allowing people like me decades later to have the opportunity to prove their worth, but even more, Dr. King allowed black people to have an identity, because what is an identity? Something you fight for. Something that defines you. Something you hold with pride because it has evolved with you,” Evans said. “Your identity is constantly changing, making it true to you. Dr. King and the Civil Rights Movement gave black people an opportunity to remember that we all have an identity, one that we choose through the actions that we take, the interests we hold, the people we love, and the things we achieve.”

Evans quoted King’s words: “We may have all come on different ships, but we’re in the same boat now,” all present no matter the journey.  “In this room, watching through the TV, or scrolling on the internet, we all share much more than we think. On this day, let us remember what has been sacrificed for our individual identities, and understand that more unites us than divides us.”

Hall High School senior Deonna Hightower focused her message on what would be King’s last speech: “I’ve Been to The Mountaintop.”

“His writing in his speech, was a call to action, change and commitment. He wanted every American to feel that they belong in this country,” Hightower said.

Although King brought blacks and whites together and effected change, the work is not done, she said.

Being both African American and a woman is hard, Hightower said. “Having more representation in schools and Congress and many more, women of color is needed within our nation. A study in 2014-2015 school year in West Hartford, showed that only 7.4 percent of teachers are non-white, compared to the 92.6 percent that are white. If we as a nation want to accomplish Dr.King’s dream we have to start with in our community first.”

Hightower spoke the names of 15 women who were victims of police brutality. “We need to acknowledge the police brutality towards people of color and too not discriminate against the minority,” she said.

“Abraham Lincoln’s goal was to end slavery, Rev. Dr. Martin Luther King Jr.’s goal was to stop the separation and hate between blacks and white. Our goal today, as I stand before you is to act on the discrimination and to not ignore the hateful acts being committed towards non-white American citizens,” said Hightower. “Our goal may not be accomplished in 10 or 15 years but, small steps today will soon make a big leap in the future. Dr. King once said, ‘Injustice anywhere is injustice everywhere.'”

Sen. Richard Blumenthal also addressed the crowd. “Thanks for reminding us what is really important about this day,” he said.

“This day has never been any more important … because our democracy, those ideals of Martin Luther King, have never been more in danger, never so tested,” Blumenthal said, reminding the crowd with a not-s0-subtle reference to the current administration in Washington, that there is still work to be done.

“The business of democracy is not a spectator sport,” he said.

“Every day should be Martin Luther King Day, ” Blumenthal said. 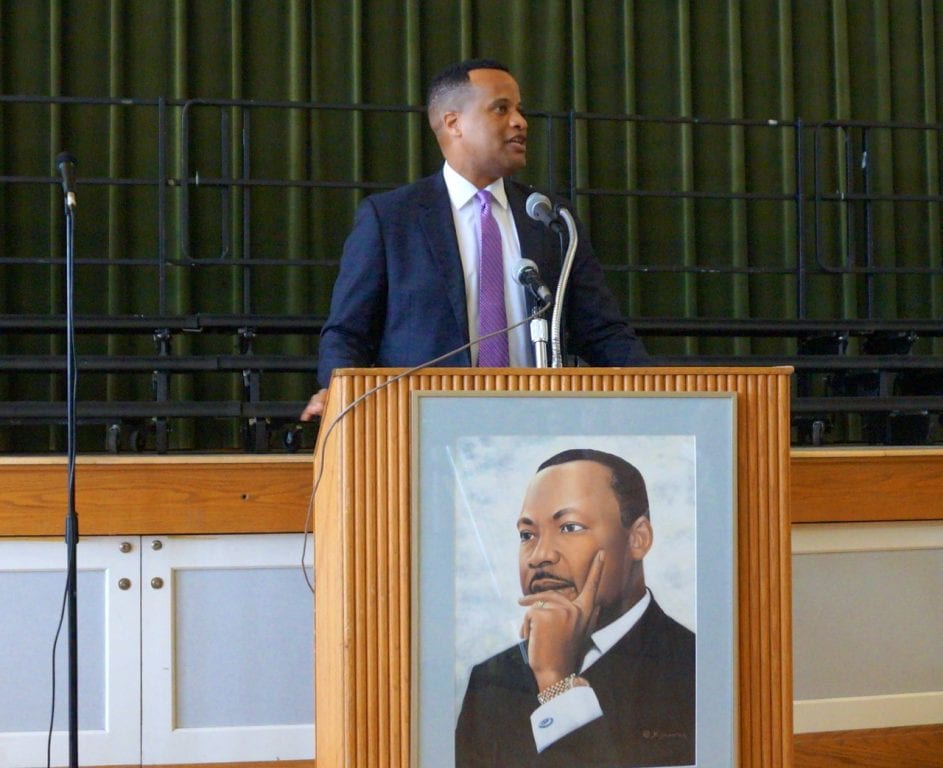 Jay Williams, now a West Hartford resident, took over as president of the Hartford Foundation for Public Giving last July. His extensive resume includes mayor of Youngstown, OH, and U.S. assistant secretary of Commerce for Economic Development during the Obama administration.

Martin Luther King Day provides a chance to reflect, both nationally and internationally, to reflect on King’s legacy, and it’s particularly timely this year Williams said. “Our country indeed stands at a crossroads.”

Williams said it’s important to consider why we are where we are today, that it’s tempting to dismiss the past year as a continuation of political bickering, but in King’s words from decades, “Nothing in all the world is more dangerous than sincere ignorance and conscientious stupidity.”

History may well define this period of history, and where will we stand, he asked.

The answer isn’t based on socioeconomic status, or education level, or race, or gender, or other typical divisions. “This is not a political question, instead it’s a question of why we are here today and why so many others have gathered across the country,” said Williams.

To many it’s not just to check off a box or appeared concerned. “There are those who realize and accept the risk of discomfort from standing in the face of challenge and controversy,” and agree with Dr. King’s words that “injustice anywhere is a threat to justice everywhere,” he said.

“We are caught in a network of mutuality tied in a single garment of destiny. Whatever affects one directly affects all indirectly, said Williams. “A network of mutuality between our communities … across the country and across the globe … that connects us with those citizens of Haiti and from Africa whose dignity was assaulted in the most vile and vain terms.”

He repeated the question” “Where do we stand?” and it’s a question that he has to answer for the Hartford Foundation for Public Giving as well, an organization devoted to philanthropy – “to put philanthropy or the love of mankind into action.”

“Will we stand in the comfort and convenience of our zip codes … or will we stand as an interdependent and interconnected region understanding that … what affects one of us directly affects all of us indirectly?” Williams said.

“King admonished us that our lives begin to end the day that we become silent about things that matter,” Williams said.

“One of the greatest attributes of this country is to hold, live and espouse a diversity of beliefs and not e subjected to governmental oppression,” said Williams. “But we all understand that with that privilege and freedom comes a responsibility.”

King reminded us that we are faced with the “fierce urgency of now,” Williams said. “Now is the time to make real the promises of democracy.” 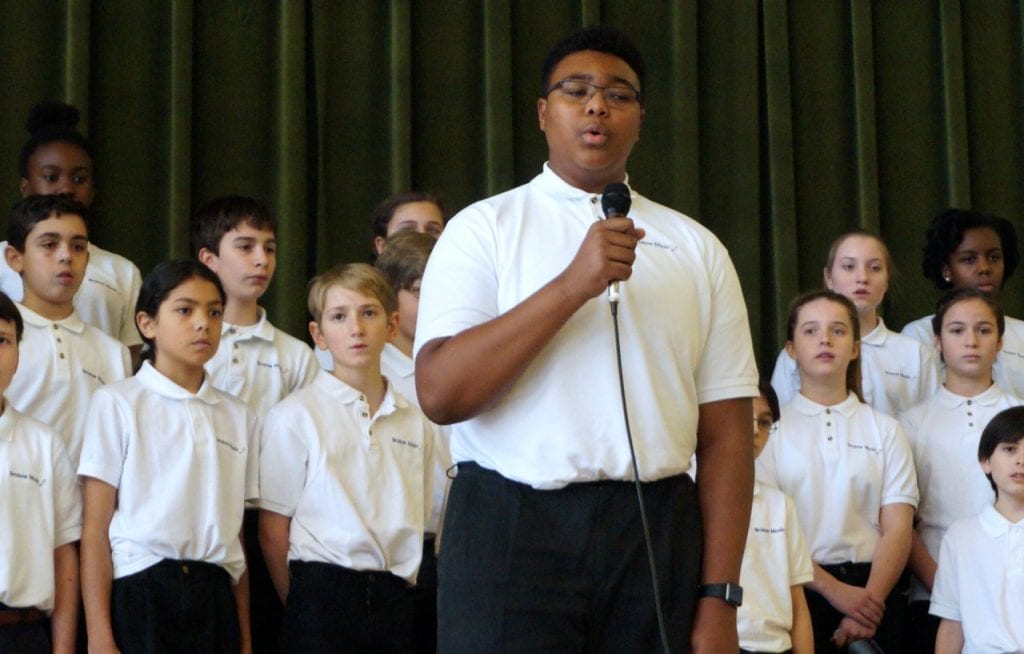 Music was also a key element of the Martin Luther King Day celebration. Conard High School’s Jazz Combo provided a prelude, and Voices of Bristow provided an interlude with a performance of the traditional Zulu peace hymn“Ukuthula.”

Conard High School’s “Voices of the World” choir closed the program with “Make Them Hear You,” and then was joined by Voices of Bristow for “Walk in Jerusalem.”

The combined choirs concluded the celebration in the traditional way – with a touching and beautiful group singing of “We Shall Overcome,” bringing many in the audience to tears.

Many members of the audience lingered after the program, viewing artwork and essays by elementary students from throughout West Hartford Public Schools that filled the hallways of Town Hall, and viewing the “Inspiring Equity” interactive Live Portrait exhibit also hanging in the hallway of the third floor. 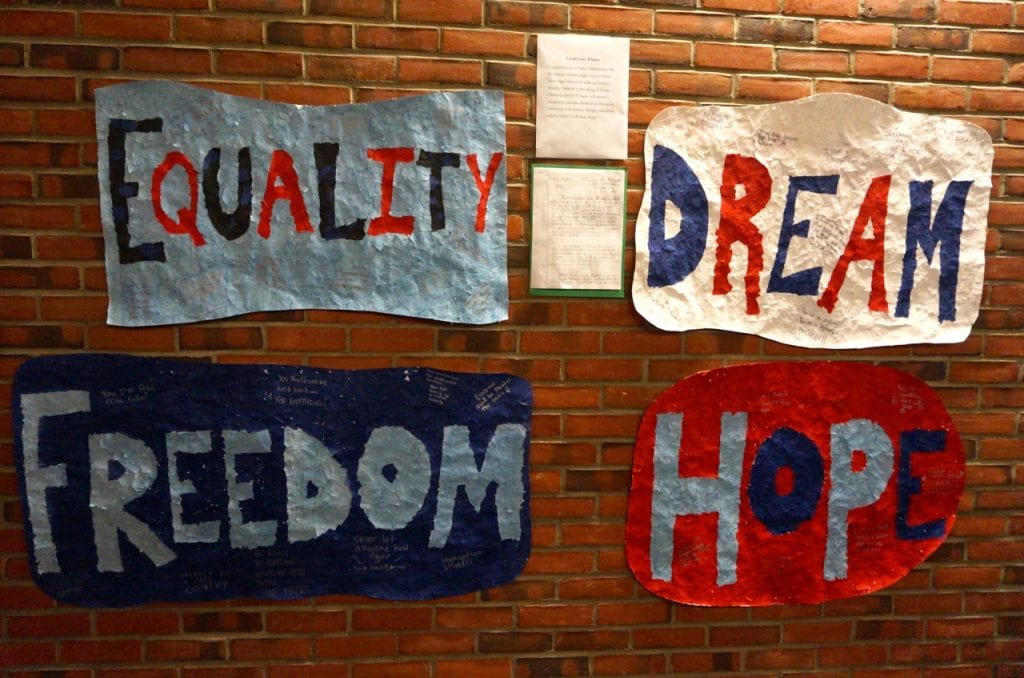 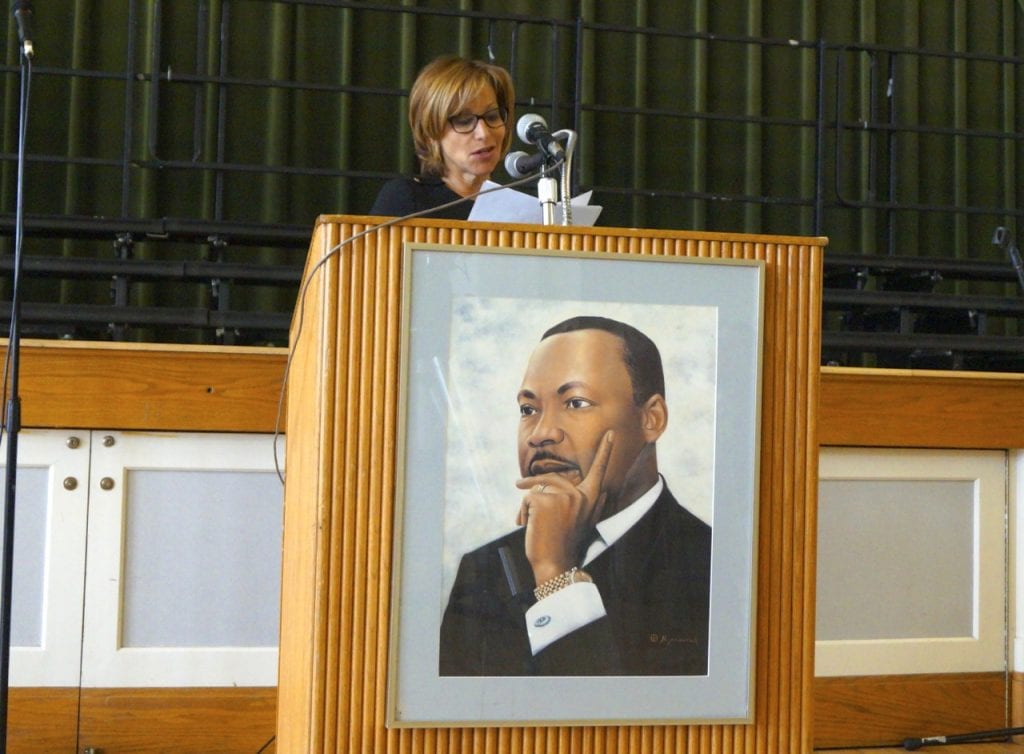 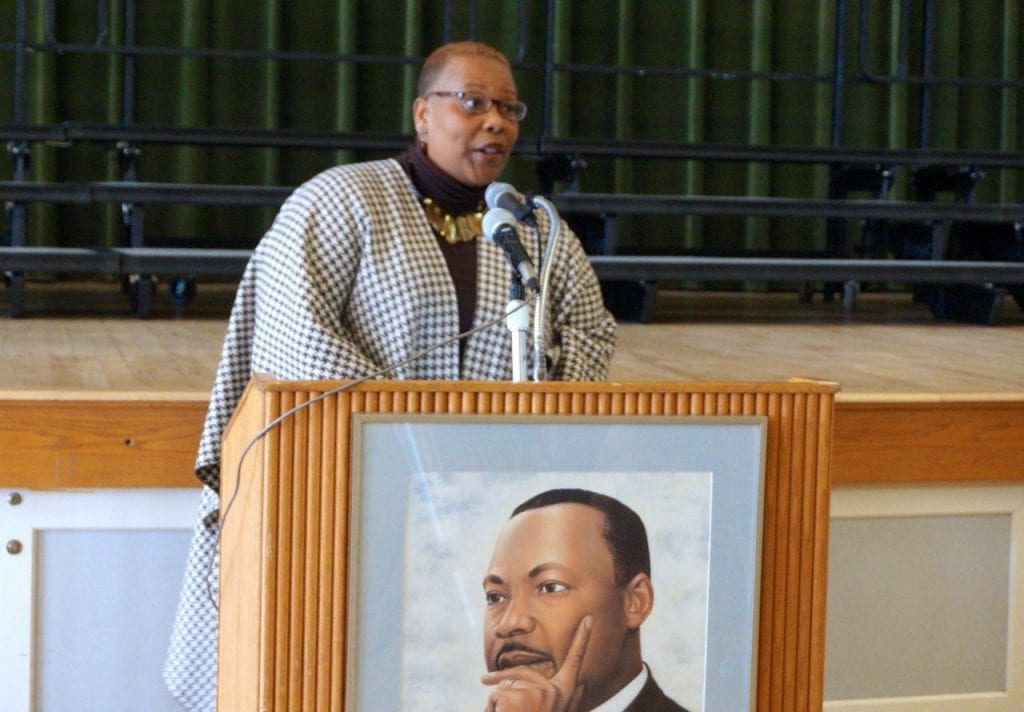 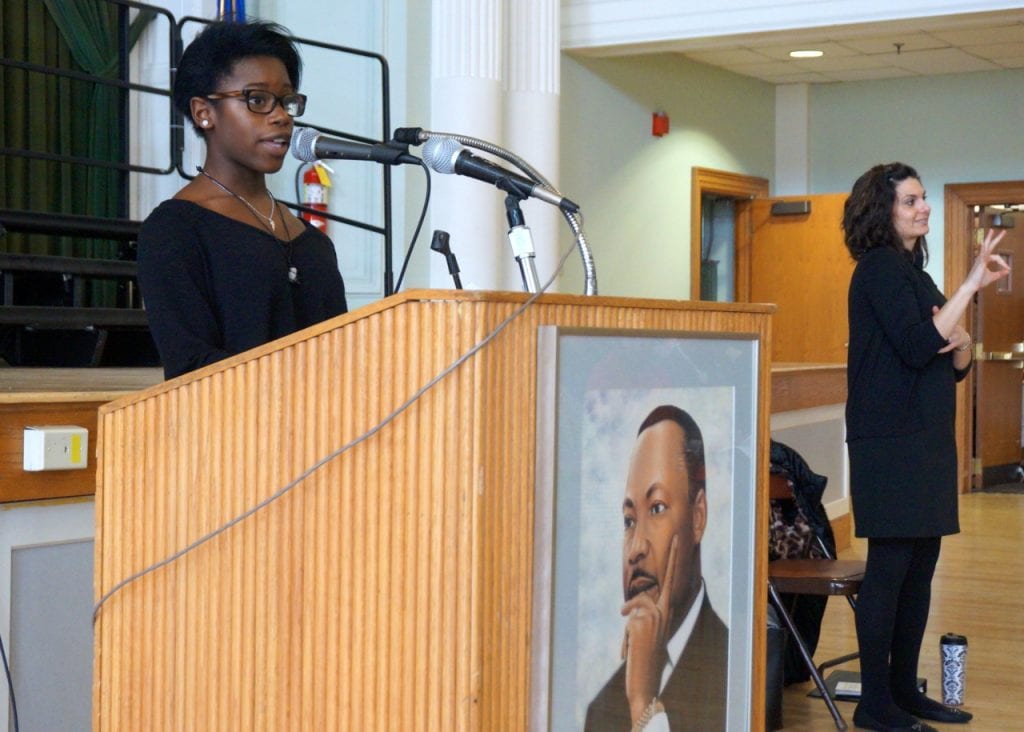 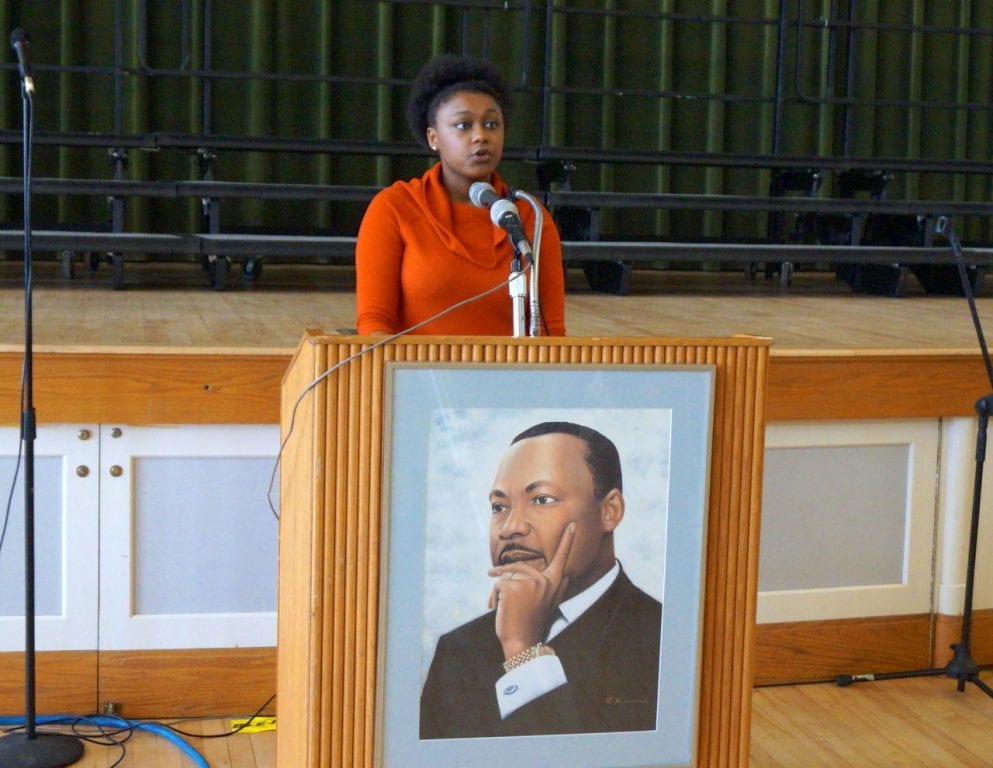 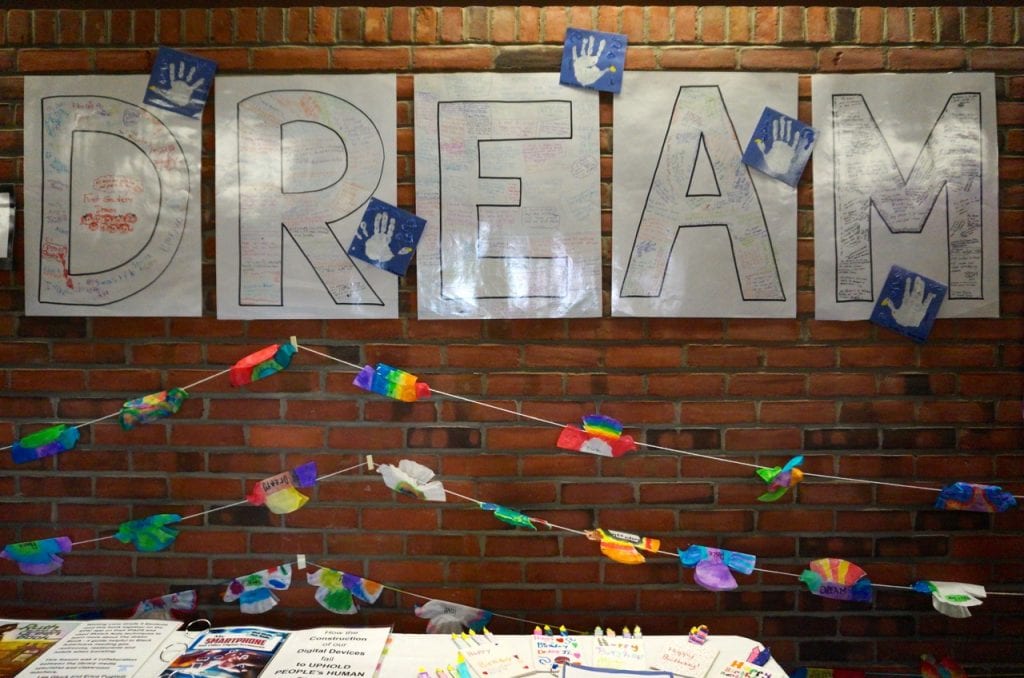 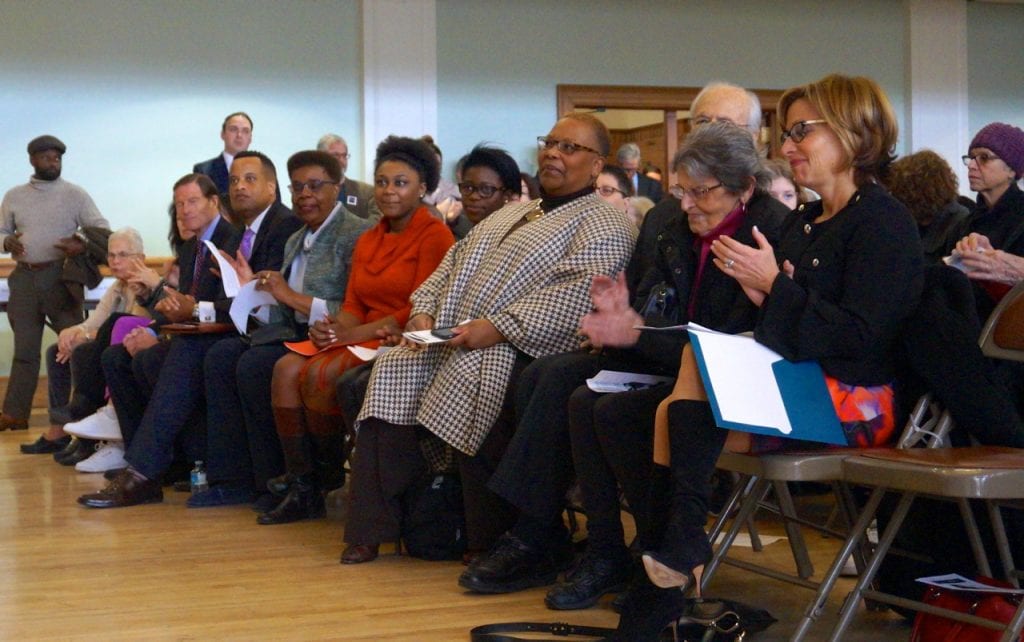 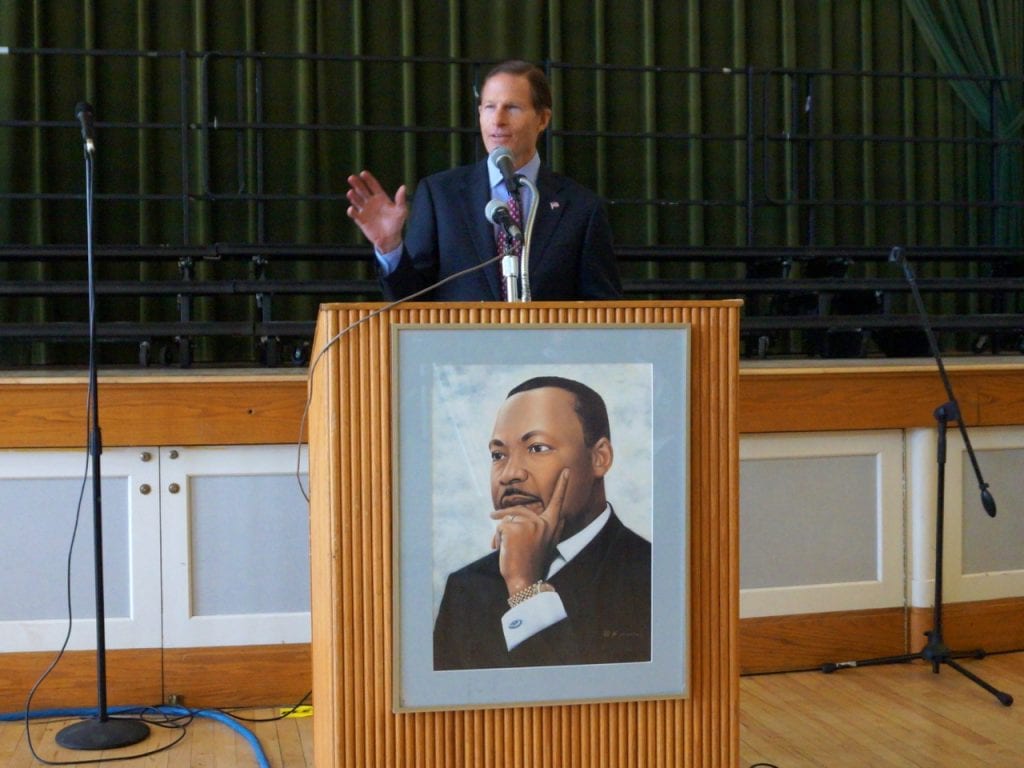 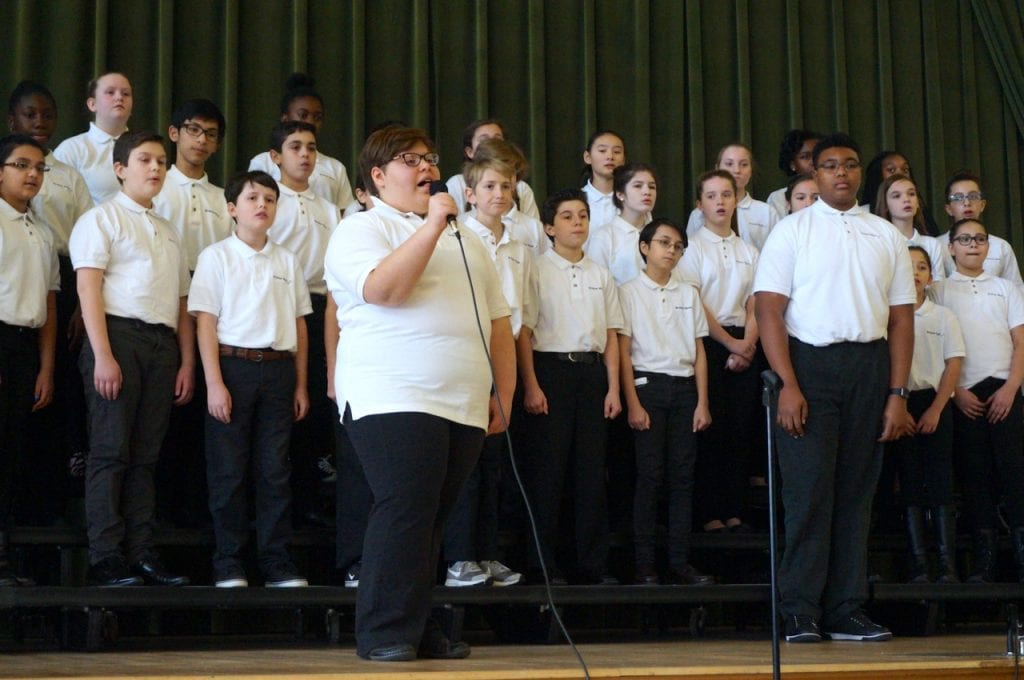 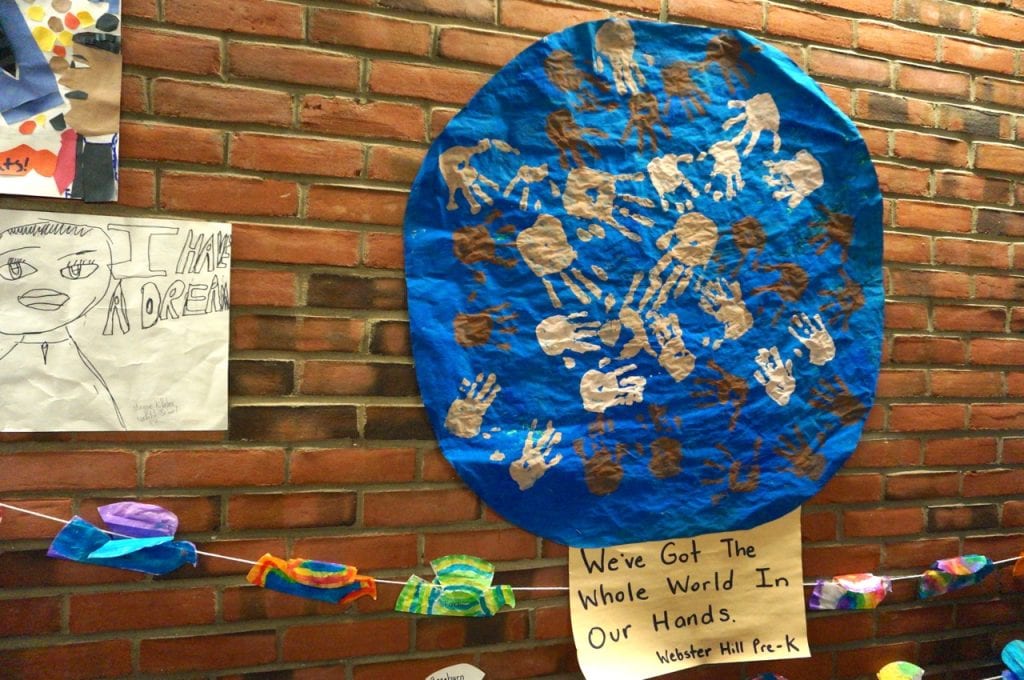 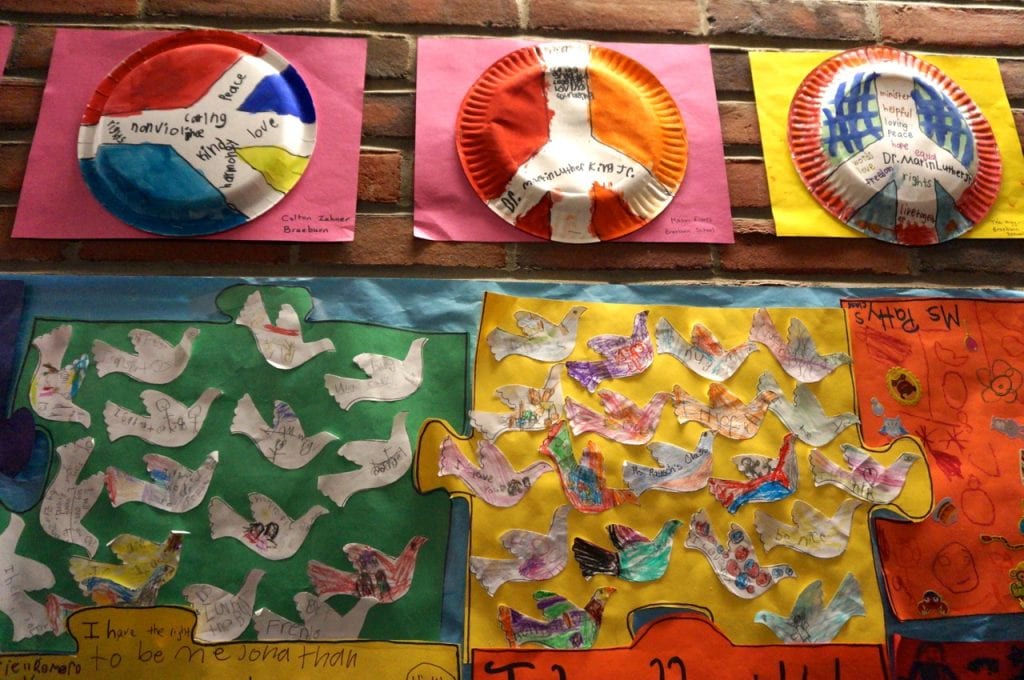 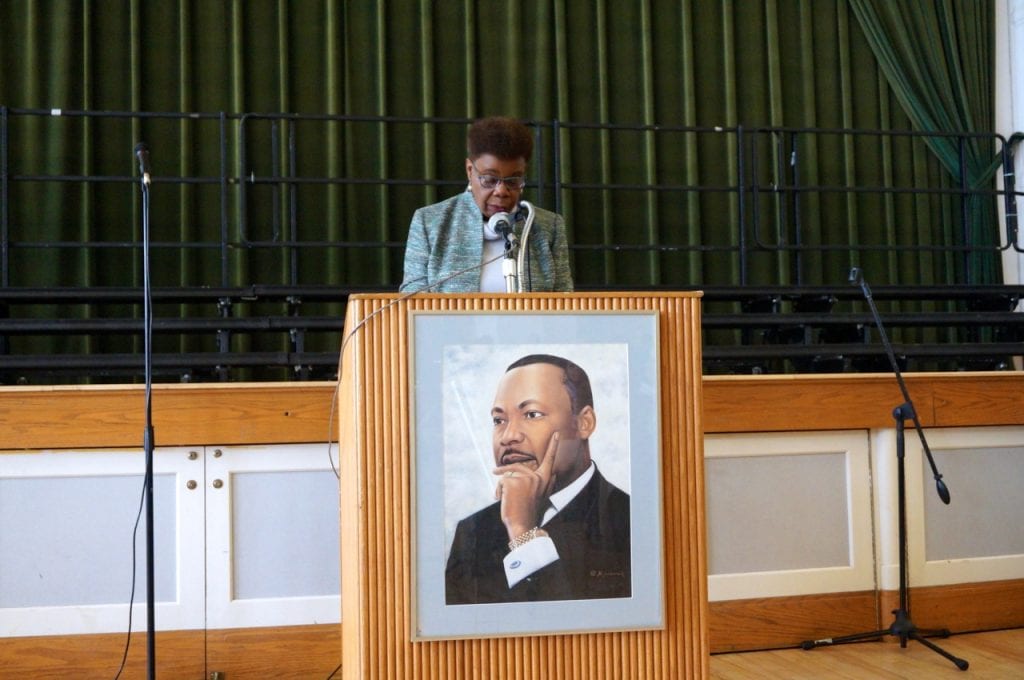 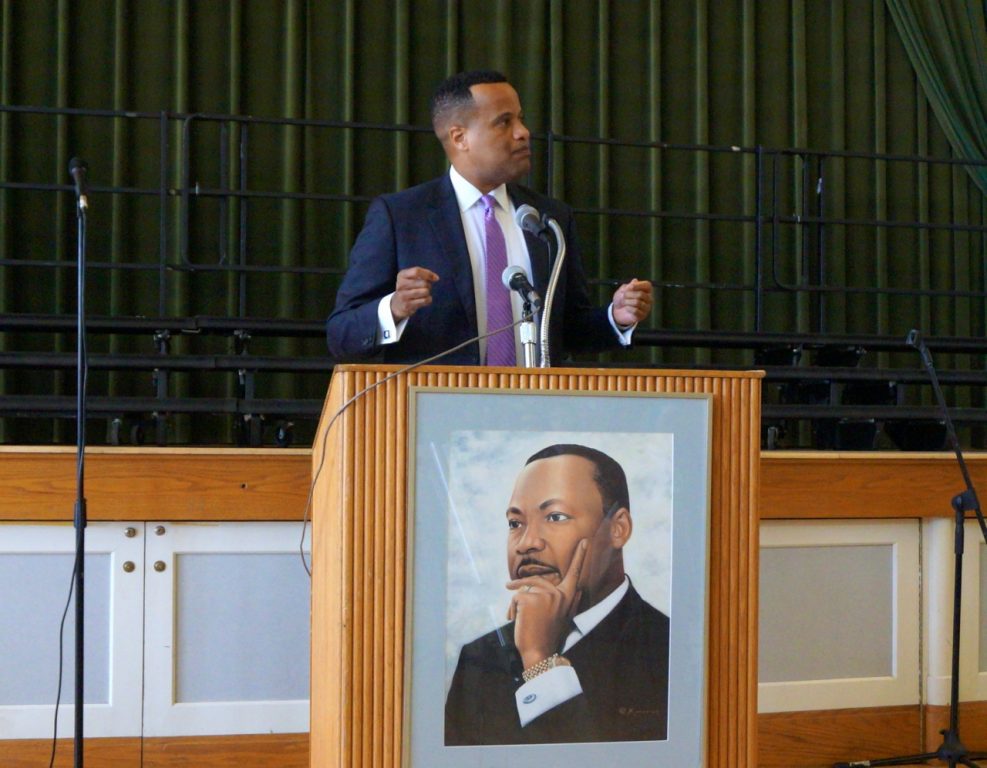 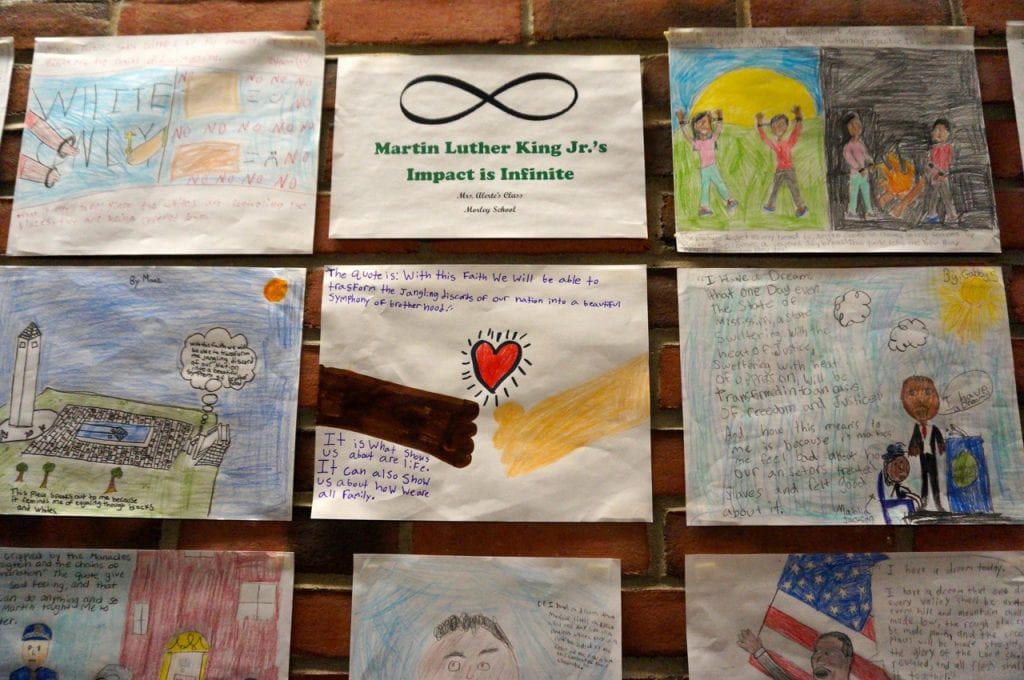 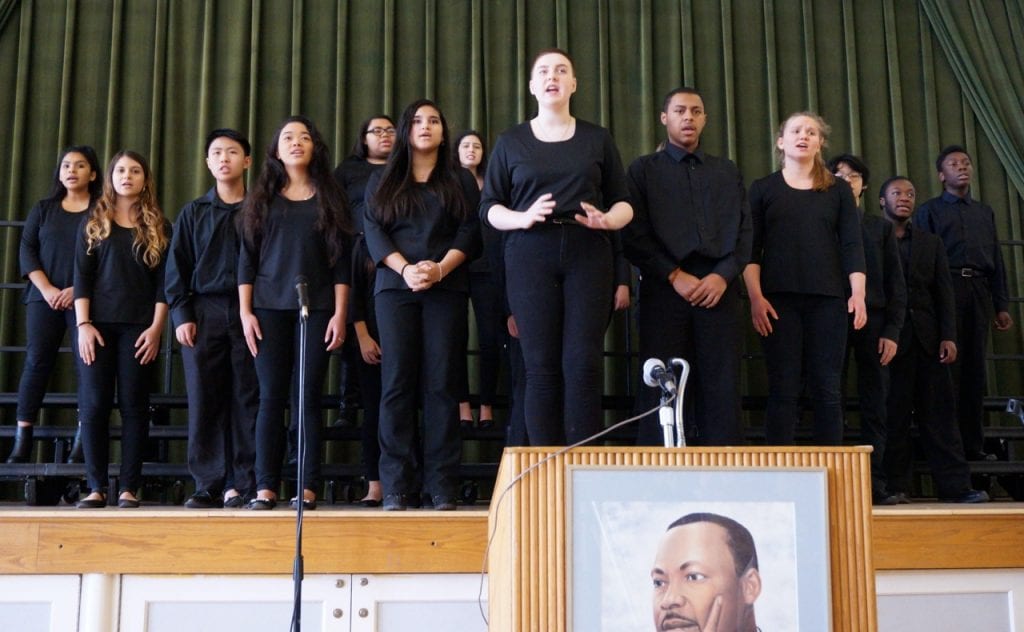 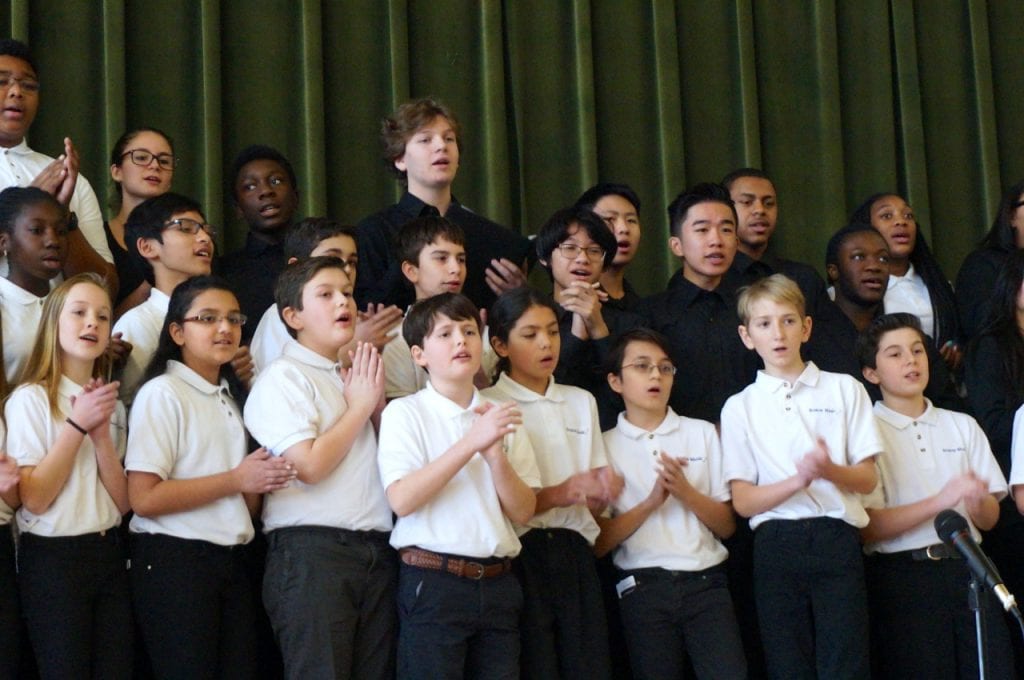 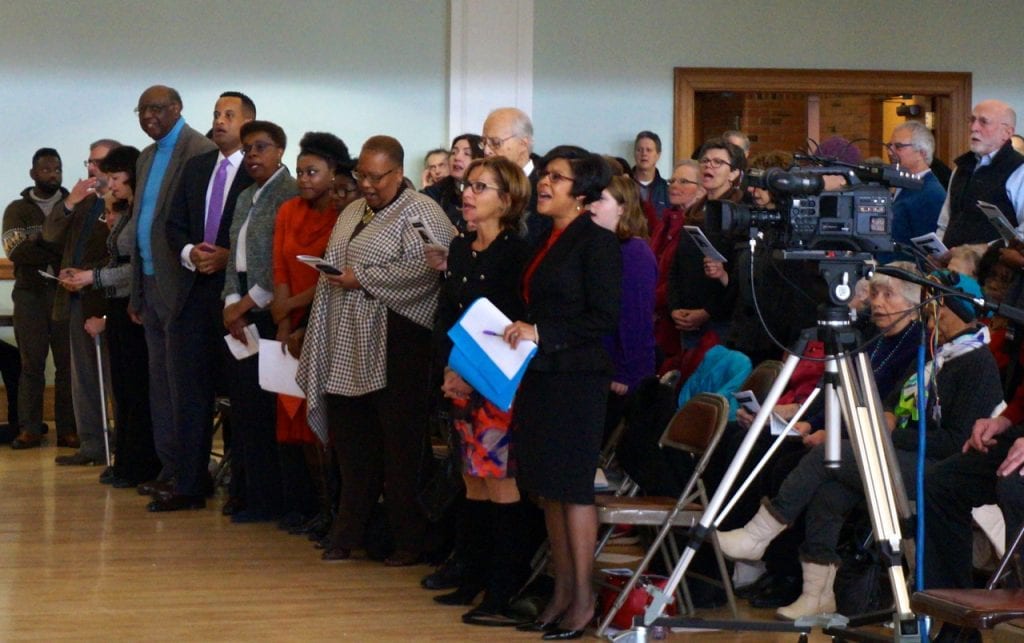 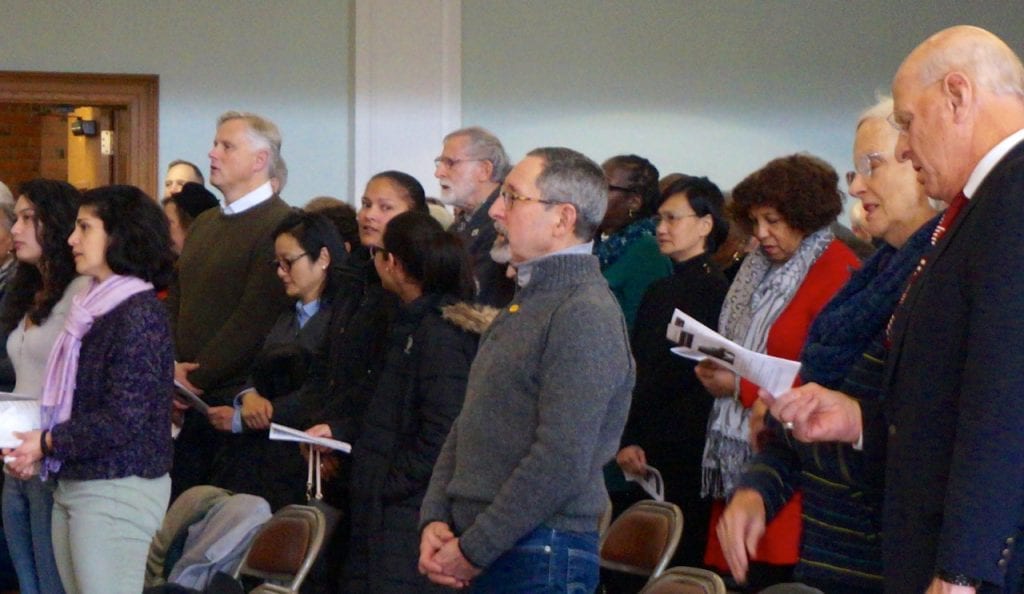 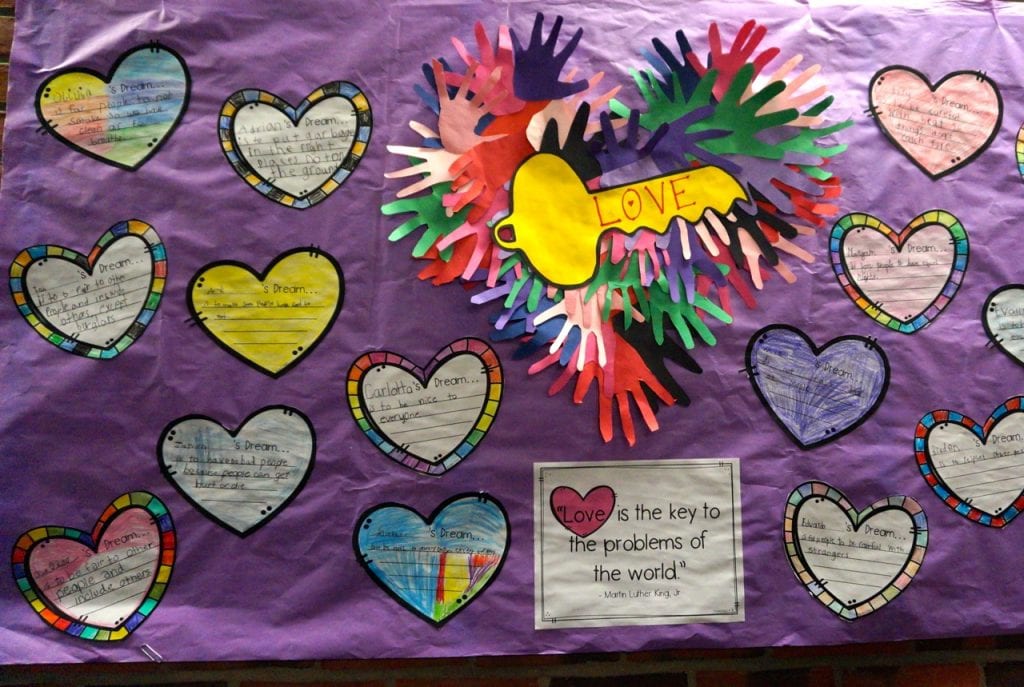