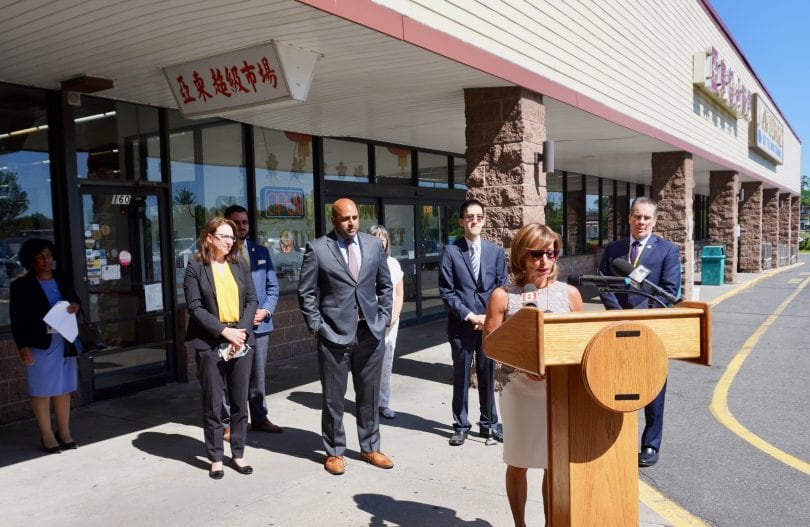 Officials welcomed the Department of Public Health mobile vaccine van to West Hartford on Thursday, and it will return for walk-up vaccines on Friday. 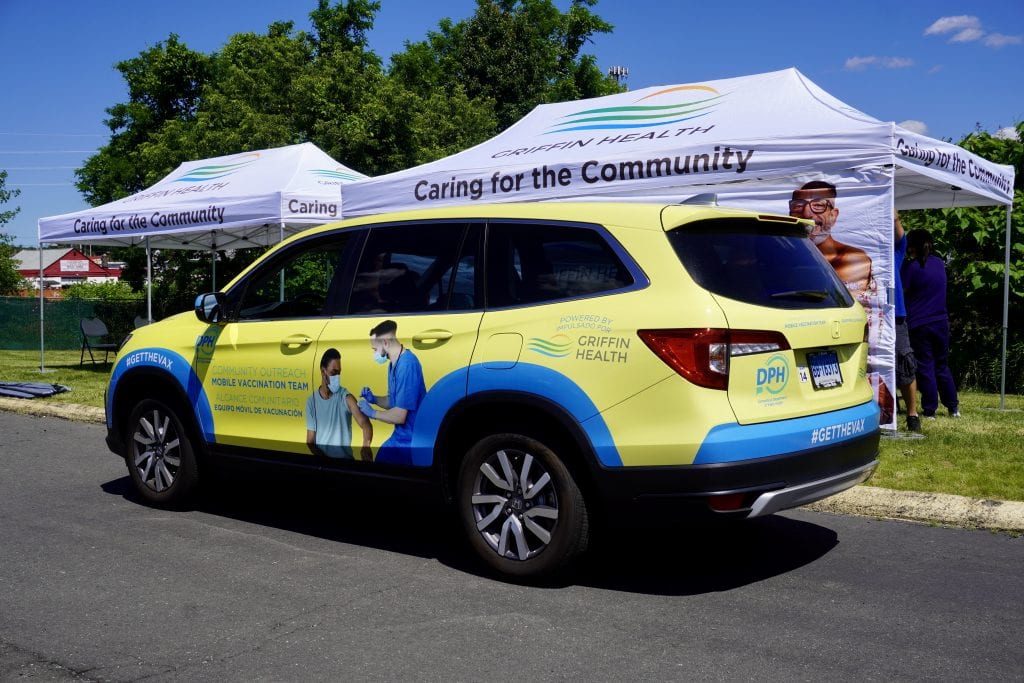 While West Hartford’s rate of vaccination is high, hesitancy as well as lack of access remains a concern among many minority groups, and officials were at the A Dong Supermarket Thursday morning to promote vaccination and welcome one of the Department of Public Health (DPH) mobile vaccination vans.

Tents were set up on the lawn in front of the Shield Street Plaza, 160 Shield St., and operating out of the yellow mobile vaccination van health care professionals from Griffith Hospital were ready to administer Pfizer and Johnson & Johnson vaccines on a walk-up basis to anyone ages 12 and up.

The mobile vaccination clinic was on site at 160 Shield St. on Thursday from 11 a.m.-5 p.m. and will return for those same hours on Friday, June 18.

Mayor Shari Cantor said that according to the Centers for Disease Control and Prevention (CDC), racial and ethnic minority groups, including the Asian American and Pacific Islander community (AAPI), have suffered from systemic inequities that put them at greater risk of COVID-19. “We’re all a part in helping prevent the spread of COVID-19 and providing fair access to health,” she said.

Health equity is a priority, Cantor said, and in West Hartford there have been efforts to reach out to populations, where they live to provide access, Cantor said. The vaccine information line, paramedics making house calls through the ARCH program, reaching out through houses of worship, door-to-door efforts to reach out to certain neighborhoods, and the opening of a mass vaccination clinic at the former ShopRite store were all examples she cited. 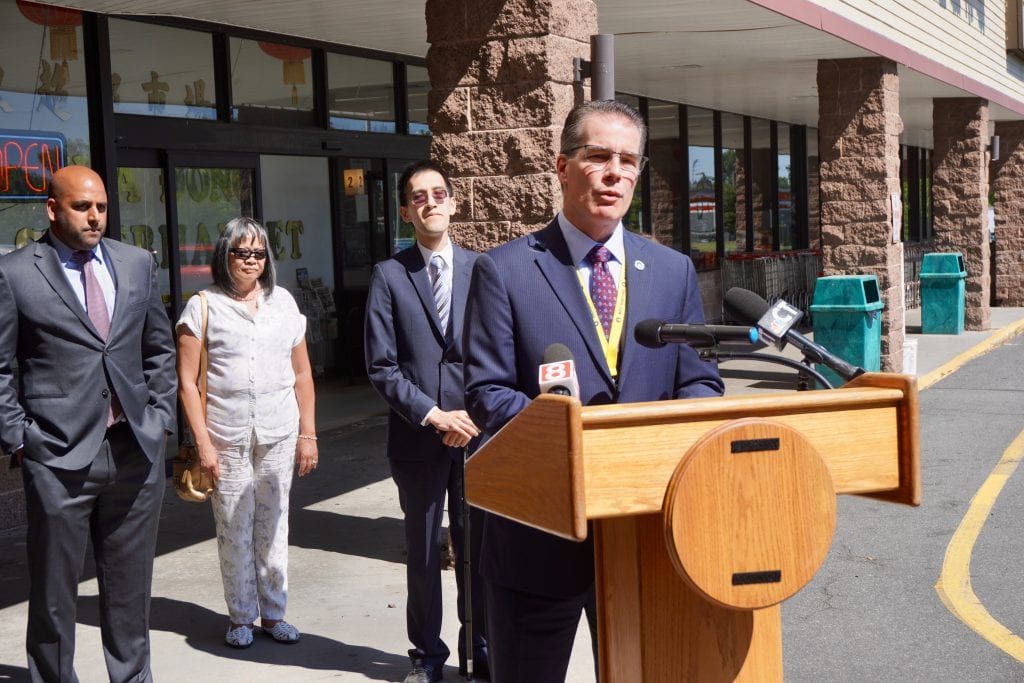 Town Manager Matt Hart speaks at a press conference at A Dong Supermarket in West Hartford on June 17. Visible in background are (from left) are Arunan Arulampalam from DCP, Miriam Young, and Alan Tan. Photo credit: Ronni Newton

West Hartford Town Manager Matt Hart, who also chairs the West Hartford-Bloomfield Health District, noted that the country surpassed the grim milestone of 600,000 COVID-19 deaths this week. “Our efforts to restore community health … is not done.”

Mortality from COVID-19 has been significantly higher among the Asian community, Hart said, particularly among those 45 or older. Working in high contact essential worker roles is likely one factor, he said, as is living in multi-generational households.

“Approximately 30% of Asian Americans have limited English proficiency which creates a bit of a barrier,” he said, including accessing tele-health services. “It’s critically important … that we continue to connect with the AAPI community to ensure they have the information they need as well as ready access to the vaccine.”

Hart also asked those in the AAPI community who are vaccinated to encourage other family members and friends to also get the shot.

“West Hartford is strong because of our diversity,” said State Rep. Kate Farrar. She has a personal understanding of barriers language can create, noting that her husband is Asian American, and came to the U.S. with his family as a refugee with limited English. 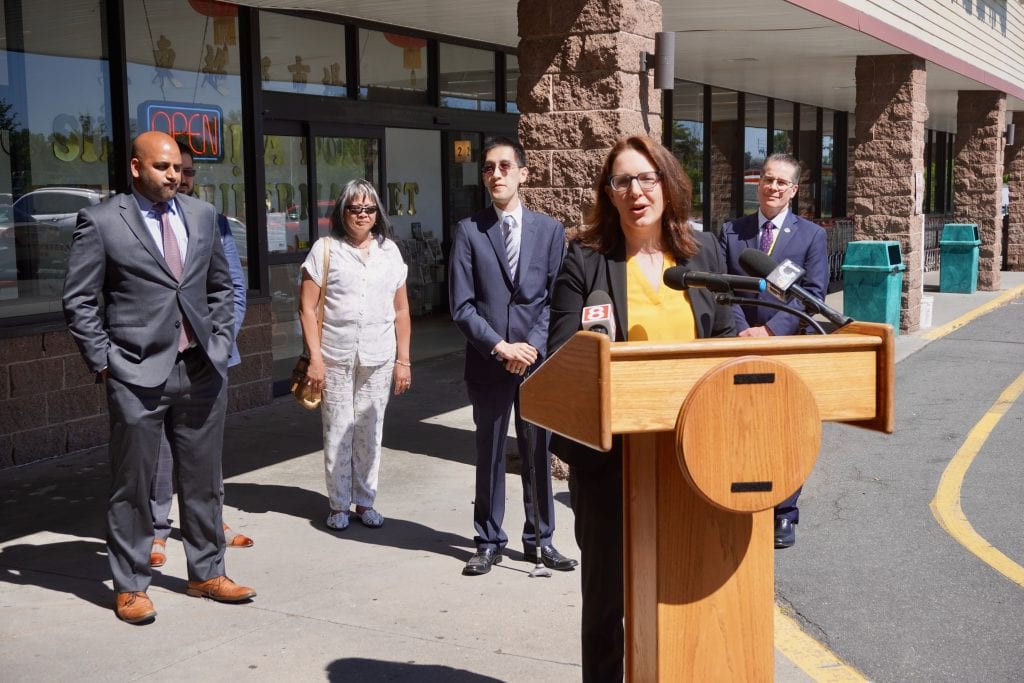 Heather Aaron, deputy commissioner of the Department of Public Health thanked A Dong Supermarket for their commitment to the AAPI community. “Vaccine clinics like this are the perfect example of how DPH collaborates with all of our community partners throughout the state to ensure that every resident is vaccinated.”

Aaron said more than 70% of adults are fully vaccinated in the state, “but there is 30% to go and we are working on that.”

“It’s so important to remember the communities that are still lagging behind, that still face vaccine hesitancy,” said Arunan Arulampalam from the Department of Consumer Protection. As a first-generation immigrant, he said he also understands the barriers that exist in the health care system.

Alan Tan, co-chair of the state’s Commission on Women, Children, Seniors, Equity and Opportunity, said because he’s vaccinated he can see, and hug, his friends and relatives. “In the Asian American Pacific Islander community, and other communities of color, there’s a lot of misinformation about the vaccine that’s going around the nation,” he said, including among his own family. In Connecticut, there’s been hard work to overcome those barriers.

Steven Hernandez, executive director of the Commission on Women, Children, Seniors, Equity and Opportunity and a member of the governor’s Hate Crimes Advisory Council, noted how the state government, from the beginning of the pandemic, has translated documents to make them accessible to all communities.

“Connecticut leads the nation. West Hartford is an emblem of how it is that our communities can respond to future pandemics,” he said.

Miriam Young, chair of the Asian Pacific American Coalition (APAC) of Connecticut said this is a great first step to having a more normal environment. She planned to help translate at the vaccination clinic.

In West Hartford, Hart said as of June 9, approximately 76% of the AAPI community in West Hartford had received a first dose and just under 65% are fully vaccinated, roughly the same percentage as among all West Hartford residents.

Outreach will continue after the mobile clinic ends, Tan said. “We do encourage anyone who has the opportunity to tell their friends, their neighbors, and anybody they know such as those who are hesitant about the information available to them.”