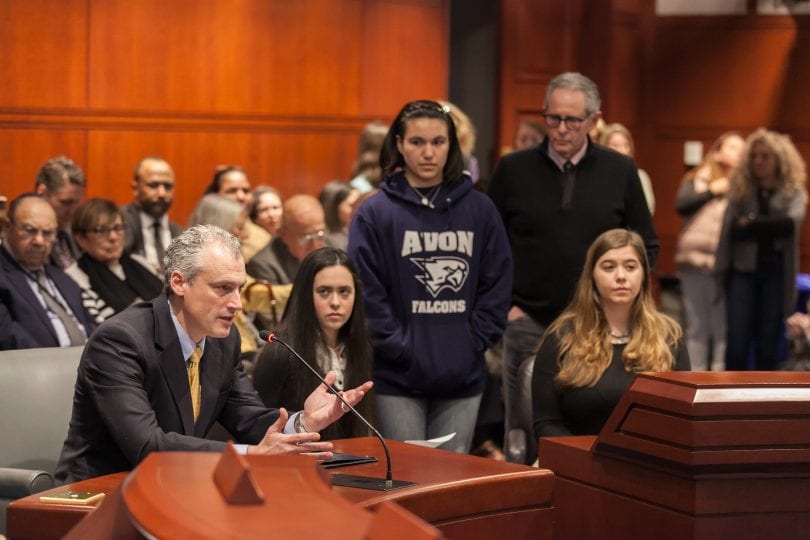 A hearing was held Wednesday on Senate Bill 452, legislation that would require Holocaust and genocide education awareness to be included in the social studies curriculum.

Members of the West Hartford legislative delegation urged their colleagues to support Senate Bill 452, which seeks to require Holocaust and genocide education awareness to be included in the social studies curriculum for public schools.

“Though countless Connecticut residents know personally about the terror and pain of the Armenian genocide, the Holocaust, and the genocides in Cambodia, East Timor, Rwanda and Sudan, many young people know nothing of this history,” Fleischmann said. “In fact, incidents of anti-Semitism and hate in our schools have doubled each of the last two years. Other incidents – including assaults, bomb threats at our Jewish Community Center and vandalism – have happened in our community and across Connecticut. It’s critical that all students learn about genocide, and about the steps we must take to reject bias and hatred, and embrace love and empathy for all people.”

“It’s past time to pass this bill to ensure that no student in our state is unaware of or can forget what can happen when a group of citizens is isolated and demonized,” Bye said.

The committee held a public hearing on the proposal Wednesday. During the public hearing, State Rep. Derek Slap, D-West Hartford, and students from Avon High School voiced the importance of including Holocaust and genocide awareness education in the social studies curriculum.

“We must never forget the victims of the Holocaust and genocide and we must make sure past is not prologue. We must stand-up to violence and intolerance – whenever and wherever it happens,” Slap said. “Teaching our students about the Holocaust and genocide is critical. They must understand what societies are capable of. Awareness and education will help prevent atrocities in the future and help honor the victims of the past.”

Supporters of the bill said teaching students about the Holocaust and genocides are critical to helping to prevent future atrocities, and to honoring victims of the past.

“We along with our educational system have the obligation to remember and teach about these past and still occurring events so that we can effect change in future generations’ perceptions of hate and intolerance,” said Jewish Federation Association of Connecticut Executive Director Michael Bloom.

“I believe it is imperative that all school districts in Connecticut include Holocaust and genocide studies in their social studies curriculum,” said Julia Shufro, a senior at Avon High School. “I think that it is very important for everyone in high school to learn about the Holocaust and other genocides because they illuminate the fact that hate crimes and intolerance can be targeted toward any group, that no one is immune, and that nobody should be treated differently because of his or her race, ethnicity, religion or belief.”

“If we want to remember the Holocaust and learn from it, providing students with every opportunity to grow and learn is essential. As more and more time grows between the horrors that occurred in Europe today, it becomes more and more important to equip students with the knowledge that could prevent another event of this kind. Students need to understand the consequences of hate and ignorance so that this generation can attempt to better the global community,” said Anna Szekeres, a junior at Avon High School.

“Students need to learn empathy. They need to understand that we have to remain vigilant, and we cannot allow genocides to pass without our knowledge. We cannot allow the victims to fade into history, or become part of another statistic. Students should be allowed the opportunity to recognize that these events are very human, and they should be allowed to understand the perspectives of the victims and the oppressors. I believe that if students are given the chance to study this aspect of human nature, they may begin to understand what it takes to prevent such events from occurring again,” said Zoe Quinones, a junior at Avon High School.