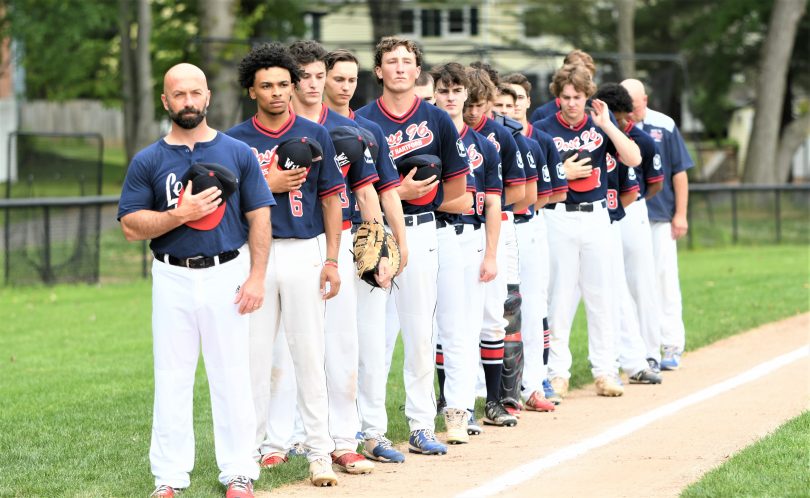 After winning their first-round matchup in dramatic fashion with a walk-off on Saturday, the West Hartford Post 96 Senior Legion team was unable to carry the momentum into Sunday, suffering a 4-0 loss to Ellington. While the 96ers were able to escape some sloppy defense on Saturday, their luck ran out against Ellington as they were unable to make up for decreased hitting production and poor baserunning decisions.

“That’s a good team with two older college pitchers,” West Hartford head coach Sean McCann said postgame. “When we make mistakes on the basepaths and give away outs, it makes it hard to catch up with yourself.”

The game started the same way as Saturday’s win, with an error on the first play. Lucas Pyrro, who leads the team with a .600 ERA, had a solid start, forcing grounders and a fly-balls, but West Hartford’s defense struggled to take advantage.

Ellington’s defense saw limited action in the bottom of the first as the 96ers went three up, three down with two fly-outs and a strikeout. West Hartford was able to hold Ellington scoreless in the second and put themselves in a position to tie with two on in the bottom of the inning. But Drew Seidman was caught stealing home to end the inning, leaving two runners on base.

Pyrro continued to escape Ellington’s scoring threats, but the 96ers’ offense could not capitalize, leaving the bases loaded in the fourth inning.

The 96ers had a chance in the sixth inning with a leadoff walk from Brendan Grady. With Pyrro batting ninth behind Grady, West Hartford had a chance to have two on with no outs and the top of the order up to bat. But a miscommunication led to Grady getting caught in a rundown and ultimately tagged out, leaving the 96ers with no runners on. Ellington secured two strikeouts, sending the 96ers back into the field.

After five innings with one unearned run, Pyrro exited the game and was replaced by Joe Dooley. The 2022 Hall graduate brought some more power to the mound, but that did not phase Ellington as they led off the sixth inning with a double followed by a successful bunt to give them runners on the corners with no outs. West Hartford was able to secure an out, but it was not enough as Ellington capitalized on a deep ball to center field, scoring both runners and extending their advantage to 3-0. But Dooley remained calm, getting two strikeouts to close the inning.

The baserunning errors continued in the sixth as Brian Chelli was caught stealing third after leading off the inning with a double to center field. The error eventually led to a missed bases loaded opportunity when the subsequent two at-bats both resulted in walks.

“That’s just someone coming in and trying to make a big play.” McCann said. “It all comes down to knowing the situation. I got to do a better job making sure that I’m communicating with my guys to know the situation. We need runners not outs.”

Having one out and an empty third base allowed Ellington to remain poised, securing the final two outs of the inning to keep its three-run lead, an advantage that they would extend to four in the final inning.

A second pitching change, with Nick Udell replacing Dooley, and two baserunners in the seventh was not enough for the 96ers to make the comeback.

With the loss, West Hartford will now have the pressure of elimination hanging on their shoulders for the remainder of the tournament. Instead of needing just one more win, the 96ers will now have to win three more games to advance to the Super Regionals.

“The way I like to flip it is that now we’re the underdog,” McCann said. “Now somebody else has the bullseye on their back so let’s go get them. Sometimes if you can reverse this philosophy and buy in to being an underdog, teams come out more aggressive.”

The underdog role is new for this West Hartford team that finished the regular season 16-0 and is the No.1 overall seed in the tournament, but it’s not the loss itself that stings.

“We’ve played in some exhibition games (and lost) so we’ve felt this before,” McCann said. “But I think what hurts more is them realizing that we lost by not putting runs on the board. And that’s a humbling experience.”

The team will take Monday to regroup before hosting the winner of Norwich and NCL/Windsor Locks on Tuesday in an elimination game. While it can be hard to not look ahead to the possibility of avenging Sunday’s loss on Wednesday, the 96ers must remain focused on the next game.

“It’s just getting on that other team early and putting the pressure on them. That’s going to be the major goal for us because when we do that, we tend to be more relaxed with the rest of our at-bats.”