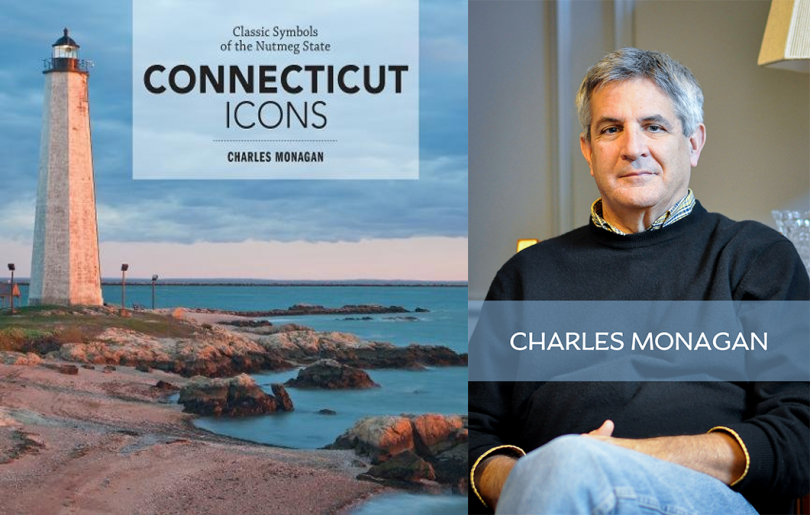 A program featuring former Connecticut Magazine Editor Charles Monagan will be held at the Noah Webster Library in West Hartford on Aug. 8.

As editor of Connecticut Magazine from 1989-2013, Charles Monagan spent years discovering and describing the people, places and things that make up the character of his home state. While there, he wrote a “Connecticut Icons” page every month in the magazine, and ultimately the collection was published in book form by Globe Pequot.

In this entertaining collection of photos, anecdotes, and little-known facts, Monagan will present dozens of his favorite things in Connecticut – from the Connecticut lobster roll to the Yale Bowl, the U.S.S. Nautilus to the Merritt Parkway – and shows native and newcomer alike the independent spirit and local pride at the heart of this great state. The event will be held on Thursday, Aug. 8, 6:30 p.m. at the Noah Webster Library in West Hartford.

Charles Monagan has been a writer and editor since 1972, when he graduated from Dartmouth College. His work has appeared in many magazines and newspapers, and from 1989 to 2013 he was the editor of Connecticut Magazine. In 1997, he won the Gold Medal for Reporting from the national City and Regional Magazine Association. In 2012, he received the Connecticut Press Club’s Mark Twain Award for Distinguished Journalism, a lifetime award.

Monagan is the author of 10 books, including “The Neurotic’s Handbook,” “The Reluctant Naturalist,” and “How to Get a Monkey into Harvard.” Additionally, he wrote the book and lyrics for the musical “Mad Bomber,” which was produced in 2011 and won first place in the Academy for New Musical Theatre’s 2012 international Search for New Musicals. His novel, “Carrie Welton” (2016), was awarded an Editors’ Choice from the Society of Historical Novels and was a finalist for the coveted JJ Bennett Award for Historical Fiction. His most recent book is a 2018 reissue of “Connecticut Icons.”

Parking: There is ample library event parking in the nearby Isham Garage. Please bypass the garage kiosks and come directly to the Noah Webster Library Meeting Room, 20 South Main St., where you may validate your parking with your license plate number.