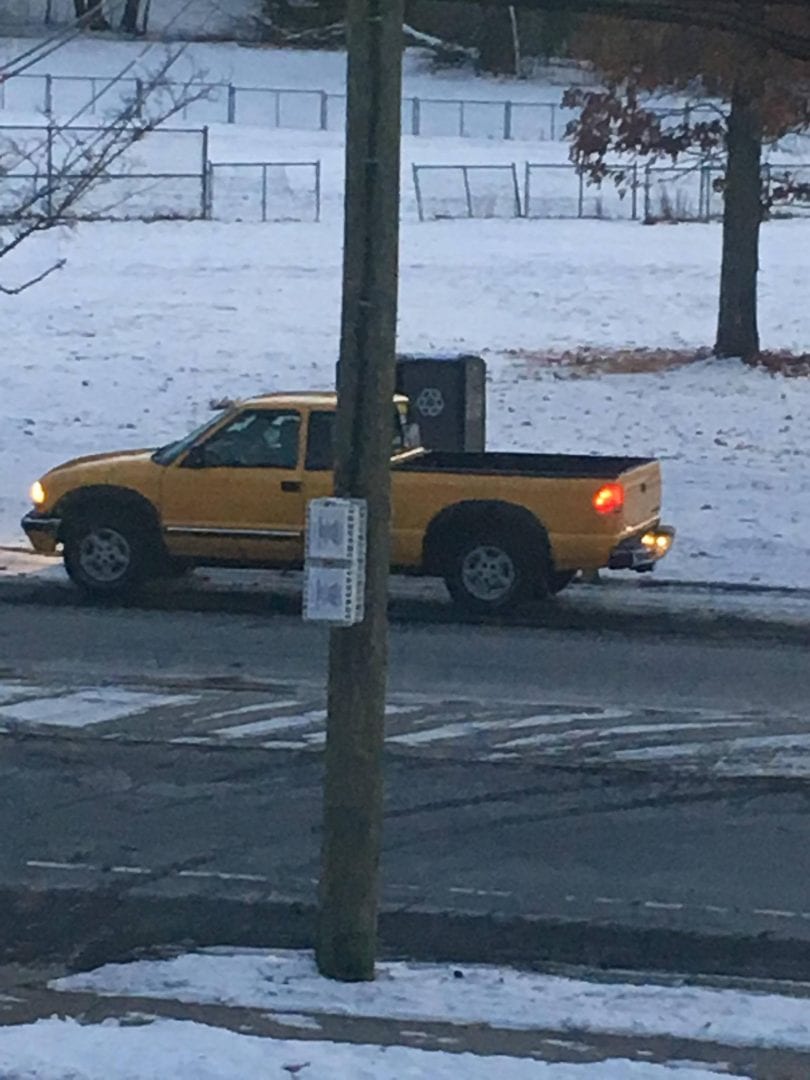 The steward of a Little Free Library snapped this photo of the truck driven by the man who cleared out her library. The truck was later spotted at the Book Barn in Niantic. Courtesy photo

A man who has been seen emptying Little Free Libraries in West Hartford has been identified after trying to sell the books at the Book Barn in Niantic.

It’s a story that has a happy ending.

Seccareccia said that one of the stewards spotted someone clearing out her Little Free Library early Wednesday morning, and then climbing into an orange/yellow pickup truck parked on the street. She was able to get a photo of the truck, but not the plate, Seccareccia said.

Seccareccia, aka “Mr. Bookman,” has been on the lookout since September for a man in an orange/yellow truck who reportedly was making a habit of clearing out Little Free Libraries and selling the stash to the Book Barn in Niantic. In fact, Seccareccia, who has previously worked in law enforcement, became “Mr. Bookman” because he was outraged that someone would violate the honor system of the Little Free Libraries.

Last fall the man had confessed, when confronted by a resident, that he likes the libraries because he can make money on them by selling the books to the Book Barn in Niantic.

Gerry Aldrich, who administers the Little Free Library Facebook page, had put Book Barn on notice back in September, and reached out to the Niantic used book business again on Wednesday.

Glenn Shea, a world renowned poet and one of the Book Barn’s managers, answered Aldrich’s email and was appalled that something like this would happen. He alerted the owners and the rest of the staff, shared the photo of the truck, and pledged to help catch the thief.

Less than three hours later, Shea emailed Aldrich: “We caught him. Fair and square, red-handed, no denials, caught him.”

Shea had shared the photo with other staff and said shortly thereafter one employee “came scampering back in and said, ‘I think that truck is in the parking lot,'” Shea wrote in his email. While the driver and his passenger were in the store, staff printed out the photo and carefully compared it to the truck in the parking lot. “It matched, right down to hub caps, tire markings and back window stickers,” Shea said.

Shea and another employee confronted the two men, telling them that Book Barn would never do business with them again.

“Do you know what the main fellow said?,” Shea told Aldrich in an email. “I didn’t take all the books. And I didn’t make any money off of it. I took store credit.”

The response by Book Barn staff probably shouldn’t be reprinted, lest a word be misunderstood by its urban dictionary definition, but Shea said that he believes Book Barn has put a crimp in the thieves’ modus operandi. “I don’t really expect we’ll be seeing the fellow anytime soon,” he told Aldrich.

West Hartford Police Lt. Michael Perruccio said Thursday that he would research what laws, if any, had been broken.

Shea said that Book Barn will plan to donate extra stock to the West Hartford Little Free Libraries when they have duplicates.

Seccareccia said that thanks to resident Ray Petersen, five stewards whose libraries have been targeted in the past now have Little Free Library stamps. “He had bought the stamps, and I passed them out,” Seccareccia said.

“This has been a satisfying day,” said Seccareccia.

He is grateful to Aldrich, the steward, and Book Barn for helping catch someone who clearly violated the ethics of the Little Free Library concept. “A big team effort,” Seccareccia said.