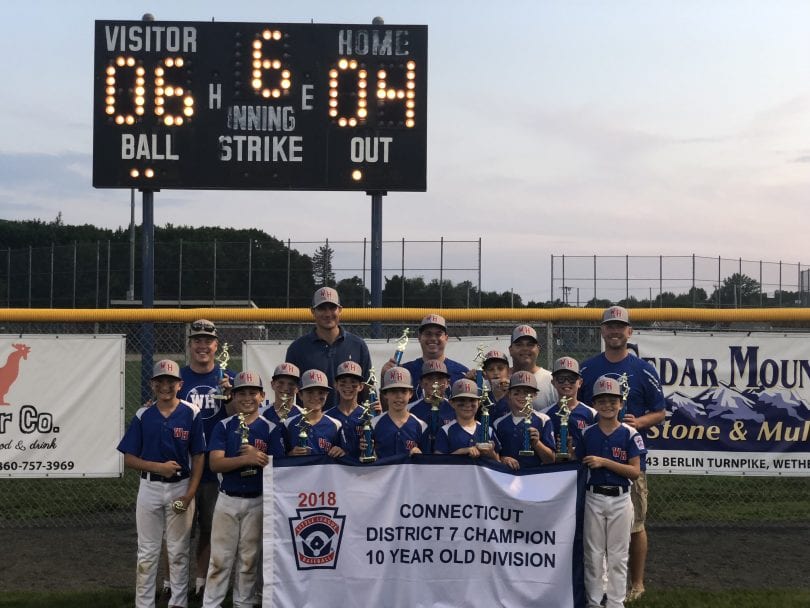 The West Hartford Little League team moves on to the sectional tournament following Wednesday night’s victory in the District 7 championship.

The team, known as “The Blue Bombers,” qualified for the district playoffs after having a 5-1 record in district play. They reached the championship game after defeating a strong Glastonbury American team 13-2. The Blue Bombers then faced the undefeated team from Mayor Mike Little League. The Bombers rallied a comeback and held on for a 6-4 victory. They will begin their play in the sectional tournament on Saturday against Madison Little League and East Lyme Little League.

The winner of the sectional tournament will advance to the state championship series.

The Blue Bombers have worked hard since early June to prepare for this season. Most important, all players have put team goals ahead of individual goals, support each other, and are having fun playing baseball together. All players have made tremendous contributions to the team’s success.

The Blue Bombers play team baseball, which is exemplified by 12 players working together and striving towards the highest levels of competition and sportsmanship. They approach the game with the mindset of the Little League motto: “Courage, Character, and Loyalty.”

The team is grateful for all of the support that they have received from current and former coaches, players, board members, family members, and friends. The Blue Bombers are proud to represent West Hartford Little League and will continue to give their best effort in the upcoming sectional tournament. Games will take place at the Great Hill Complex on Jail House Road in Haddam, CT, on Saturday, July 14 and Sunday, July 15 at 11 a.m.