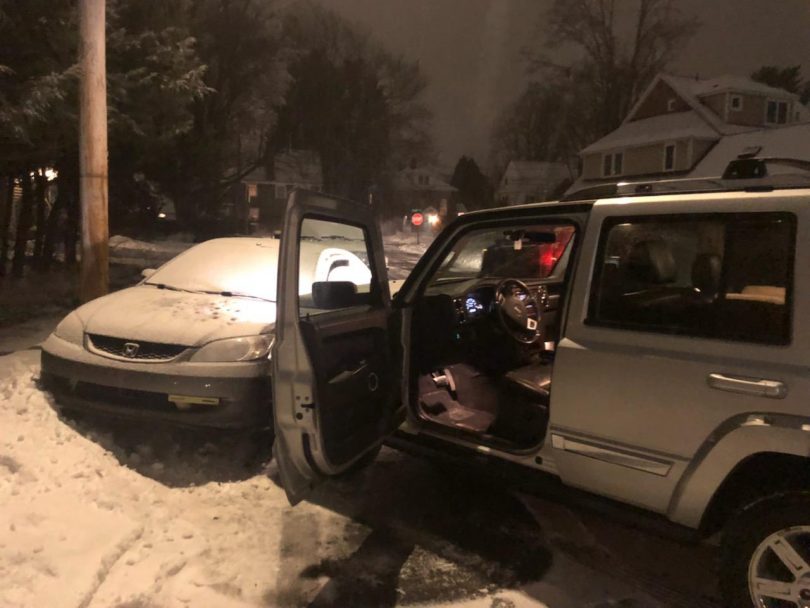 Juveniles attempted to steal this Jeep Wednesday night, crashed it into a parked car, and fled in a car they stole from a neighbor. Photo courtesy of Austin Hersh

A West Harford man was thrown to the ground Wednesday night when he tried to stop two juvenile females who were stealing a car from his driveway.

West Hartford Police apprehended two juvenile females who tried to steal one car from a West Hartford driveway, crashed that into a parked car, ran off, and stole another car they found running nearby, fleeing into Hartford.

Police said they were called to 154 LaSalle Rd. around 7 p.m. Thursday night, responding to a report that a Jeep had crashed into a parked car and the driver and passenger, who were in the process of stealing the Jeep, had fled on foot.

Police said that the caller reported that he had left the car running momentarily in the driveway, and when he walked out of the house and saw the two juveniles in his car, he opened the driver’s door in an attempt to stop them.

According to police, the juvenile driver “put the car into gear and began to leave, turned sharply, which then threw the complainant to the ground.”

The juveniles crashed into a parked car, and then fled on foot, heading east on Pelham Road where they found a Volvo, which was also running, stole that and fled the area.

Police said that the juveniles, who were ages 14 and 15, were known to them from previous encounters. They were tracked to a location in Hartford where they were apprehended and the Volvo, which was undamaged, was recovered.

The victim, Austin Hersh, did not report any resulting injuries, police said, but he told We-Ha.com that he had previously sprained his left ankle, was borrowing his mother’s car because his is standard shift and he was having trouble operating the clutch, and had backed into the driveway and left the Jeep running for a moment while he grabbed another set of keys in the house so he could juggle cars around.

Hersh said that as he was getting out of the car to go into the house, he greeted two teenage girls who were walking along the sidewalk.

“As I walk back outside, I hear the jeep revving up as if someone is pressing on the gas. I run over to the car to find one of the girls in the driver’s seat and the other behind her in the back left seat, both buckled and ready to ride! I swing both the front and back doors open yelling at them to get out of my car, while the girl in the driver’s seat continuously presses on the gas (while the car is in park) and the girl in the back trying to push me out of the car and shut the door,” he said.

He said that before he was able to pull the driver out of the car, she flung it into drive, and floored it as she pulled out of the driveway, “with me hanging in the car, trying to stop her.” 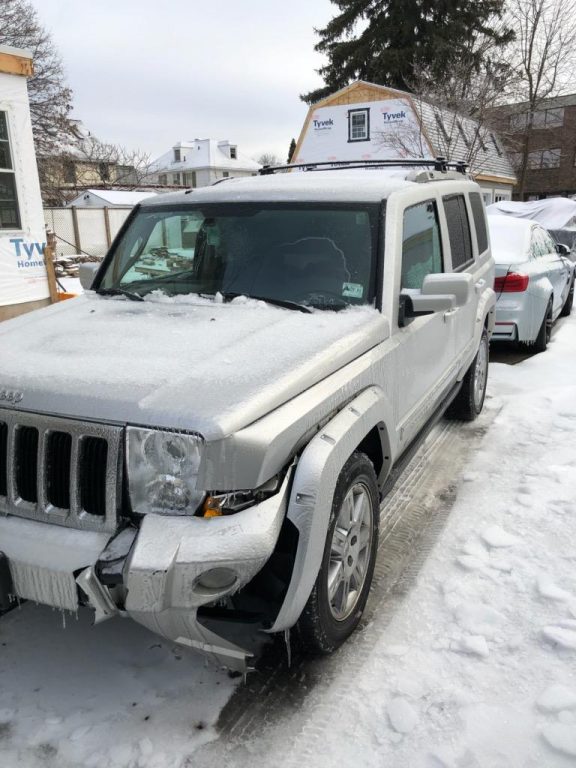 Juveniles attempted to steal this Jeep Wednesday night, crashed it into a parked car, and fled in a car they stole from a neighbor. Photo courtesy of Austin Hersh

Hersh said he jumped back, right before the juvenile slammed into a car parked on the road. He yelled to neighbors to call the police as the girls fled on foot and almost immediately found another car running, which they then stole.

“I never would have thought something like this would happen in our neighborhood, but I guess you can never know,” Hersh said. He said he hopes that the girls are remorseful for their actions and realize that due to their “reckless choices,” they could have seriously injured themselves and others.

Hersh was very grateful to the police department for their quick response and professionalism. He said that he usually drives a manual transmission car, which may limit the chances of having it stolen, but he has definitely learned a lesson about not leaving a car running, even in your own driveway.

As for the juveniles, police said that they were taken into custody and issued juvenile summonses with the following charges: second-degree criminal trespass, third-degree robbery, third-degree larceny, conspiracy to commit third-degree larceny, reckless endangerment, evading a motor vehicle accident, failure to drive right, driving too fast for conditions, and risk of injury to a minor.

Both were released to their guardians, police said.

The Jeep sustained front end damage, and there was also damage to the parked car. The Volvo was not damaged, police said.

“The West Hartford Police Department would like to commend the officers in this case for doing an excellent job of locating the Volvo and the suspects in Hartford,” said Capt. Michael Perruccio. “We would also like to remind people not to leave cars unlocked or running unattended even for the shortest periods of time.”