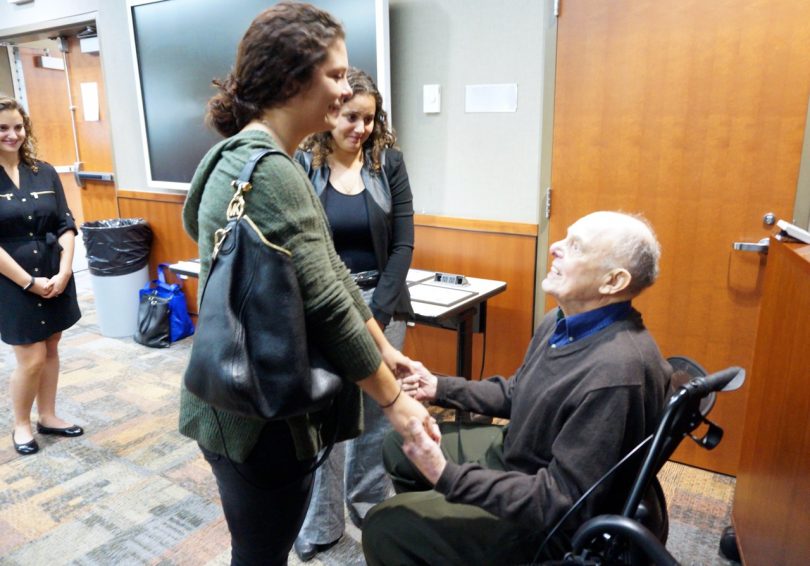 Courtney Melanson greets Len Glazier. She saw him lying on his front lawn while the lawnmower was running and called 911. In the background are Glazier's granddaughter's Amy (left) and Tracy. Photo credit: Ronni Newton

In a ceremony at the West Hartford Police Department Friday afternoon, Len Glazier thanked those who saved his life when he went into cardiac arrest while mowing his lawn over the summer.

Len Glazier knows he is a very lucky man.

His story is a classic “being in the right place at the right time” tale with a happy ending, and he is very grateful. What happened to Glazier over the summer doesn’t always result in a happy ending.

On Friday afternoon, Glazier had a chance to meet University of Saint Joseph Teaching Assistant Courtney Melanson, APRN Patti Gleason, West Hartford Police officers Pete Senick and Nick Roman, and paramedic Brett Ortola. He thanked and hugged each one, handing out lifesaving certificates as the official recognition of their saving his life. Four West Hartford firefighters and dispatcher Eileen Bartlett, who were unable to attend the ceremony, were also recognized.

Following the ceremony, Glazier shared the specifics of what happened on July 25, 2017.

Glazier, who is 88, and has lived in West Hartford since 1963, was mowing the front lawn of his Asylum Avenue home.

“I was cutting the grass. I had gotten gas and went food shopping,” he said. His mower is self-propelled, and he said it would take him about 20 minutes to cut his small lawn. He planned to get a haircut later in the day.

Glazier said he played tennis three times a week up until he was 85, stopping only because he needed to care for his wife who became ill. She passed away in March 2017, and he kept himself busy taking care of his home.

“It was a good way to exercise. I enjoyed it,” Glazier said of mowing the lawn.

Brandon Bartell, a supervisor with American Medical Response (AMR), coordinated the “code save celebration” held in the West Hartford Police Department training room. He told the audience – which included Glazier’s family, representatives of the West Hartford Police and West Hartford Fire departments, and town officials – that what happened shows the importance of bystanders reacting quickly and the use of an AED by the police officers who arrived quickly on the scene.

“The bystanders administrating CPR contributed to a remarkable recovery,” Bartell said. The survival rate for this type of incident is very low, but in this case perfect timing and teamwork contributed to the successful outcome.

Glazier doesn’t recall much about the rest of the day. “I remember feeling lightheaded, just for a second. That’s all I remember,” Glazier said. He had gone into cardiac arrest and collapsed on the lawn.

Melanson was heading back to work at the Gengras Center at the University of Saint Joseph after her lunch break. She was the passenger in a car and had wondered why her co-worker had taken the route he had down Asylum Avenue. For Glazier, that was lucky.

Melanson saw Glazier lying on his lawn, holding onto the mower that was still running, and immediately called 911. She said it was the first time she had called when it was a “life or death situation,” she said. “I was bawling my eyes out.”

Also fortuitous was that Gleason, an APRN who lives on a nearby West Hartford street, happened to be driving by. When she saw Glazier down, she immediately stopped her car ran over, and began administering CPR.

Gleason said she’s been a nurse practitioner for many years, but has never done “bystander CPR.”

The police officers used their AED to deliver a shock. Roman said he’s done CPR plenty of times, but has never had a success story like this one. “It was clearly amazing to see,” Roman said.

“He came back on the scene,” Senick said. By the time Glazier was loaded onto the ambulance, he was able to speak.

Glazier may not remember it, but after suffering cardiac arrest he was resuscitated on his front lawn and conscious and talking by the time he was in the ambulance.

He said he feels okay now, even though he still has to take it easy walking. He spent a month in the hospital and is still undergoing rehabilitation. It could take up to six months to fully recover, he said, after having a stent and double bypass surgery. Two of his ribs are still healing from being broken during the administration of CPR.

Glazier’s son, Mike, was at the ceremony. He said afterward that a landscaper will now be mowing his father’s lawn.

Tracy Glazier, Len Glazier’s granddaughter, publicly thanked the citizens and first responders at the ceremony. She said she had “no words to express” how grateful she was to those who saved her grandfather’s life.

“As professionals you don’t often get to see what happens to them,” Tracy Glazier said. Because of everyone’s teamwork, there was an amazing outcome. “There’s no way to thank you other than to show you living proof.”

West Hartford Fire Chief Gary Allyn said an incident like this speaks to the importance of as many people as possible knowing how to administer CPR.

“It’s so great to see him. I’m so happy they reached out,” Roman said. 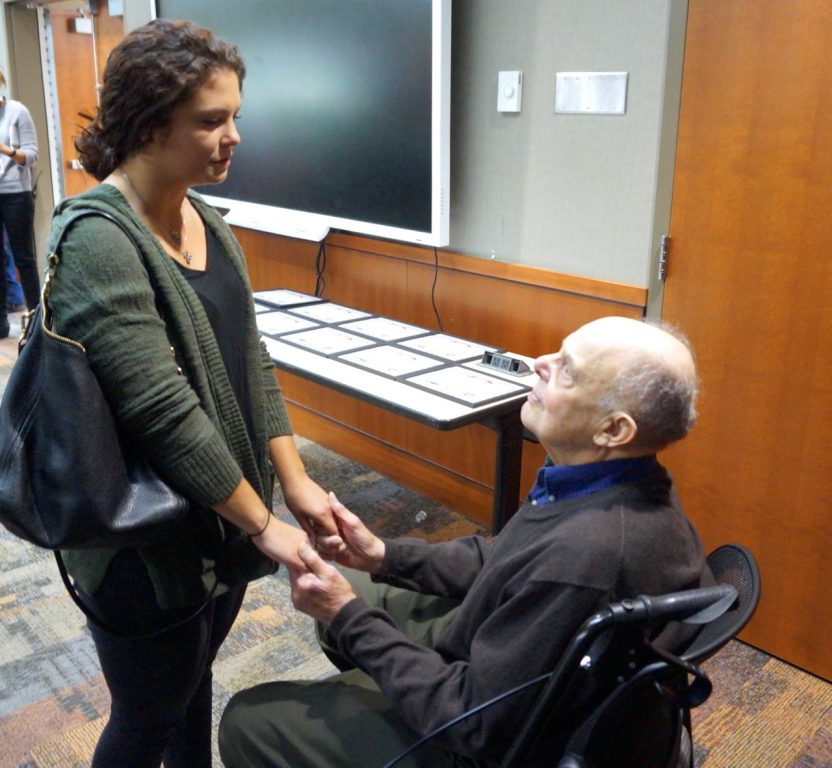 Courtney Melanson greets Len Glazier. She saw him lying on his front lawn while the lawnmower was running and called 911. Photo credit: Ronni Newton 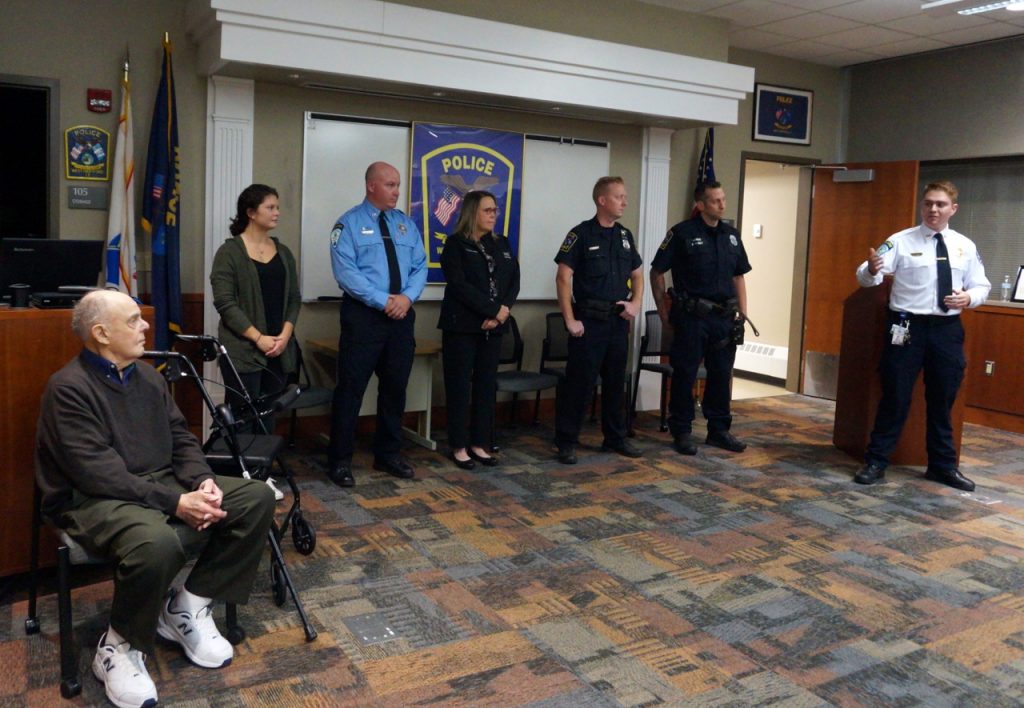 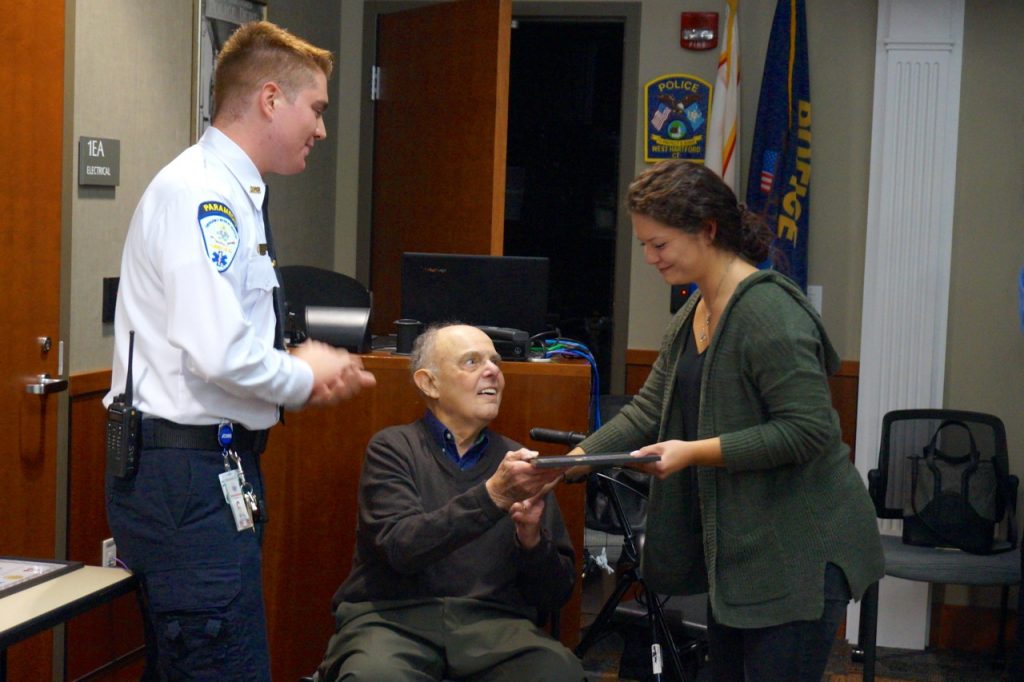 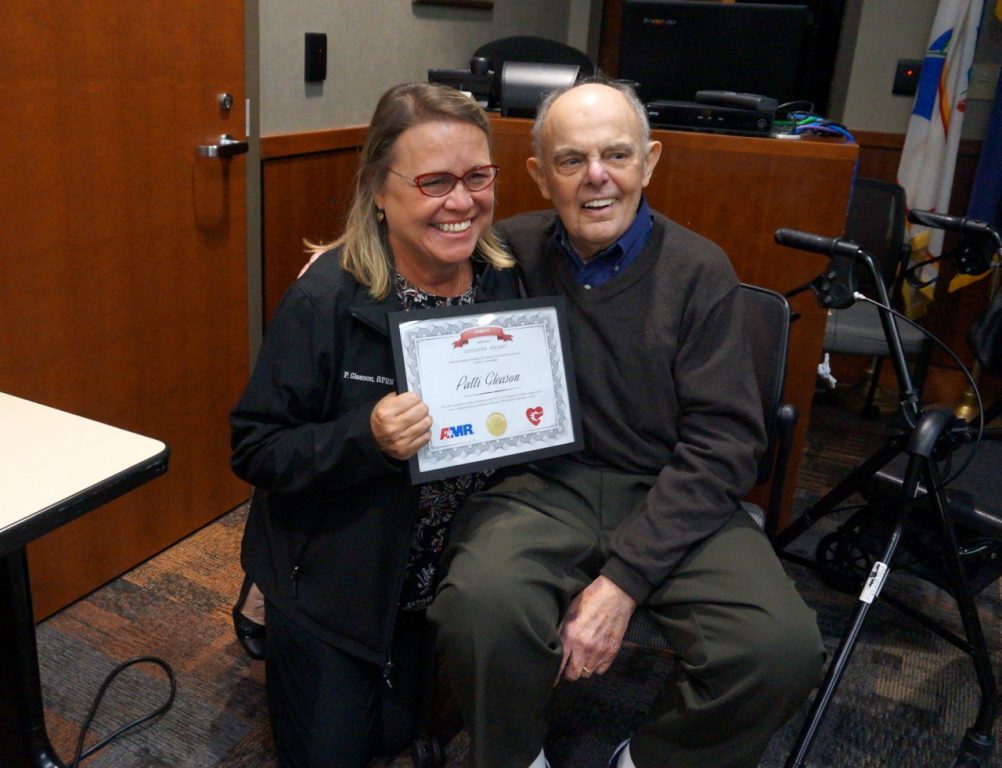 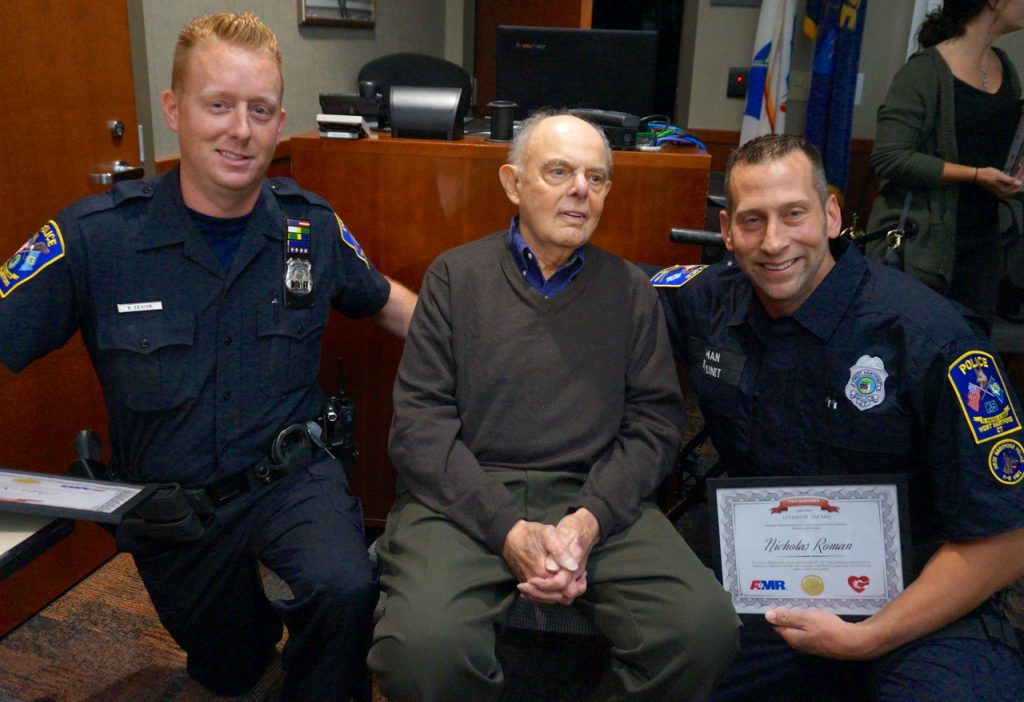 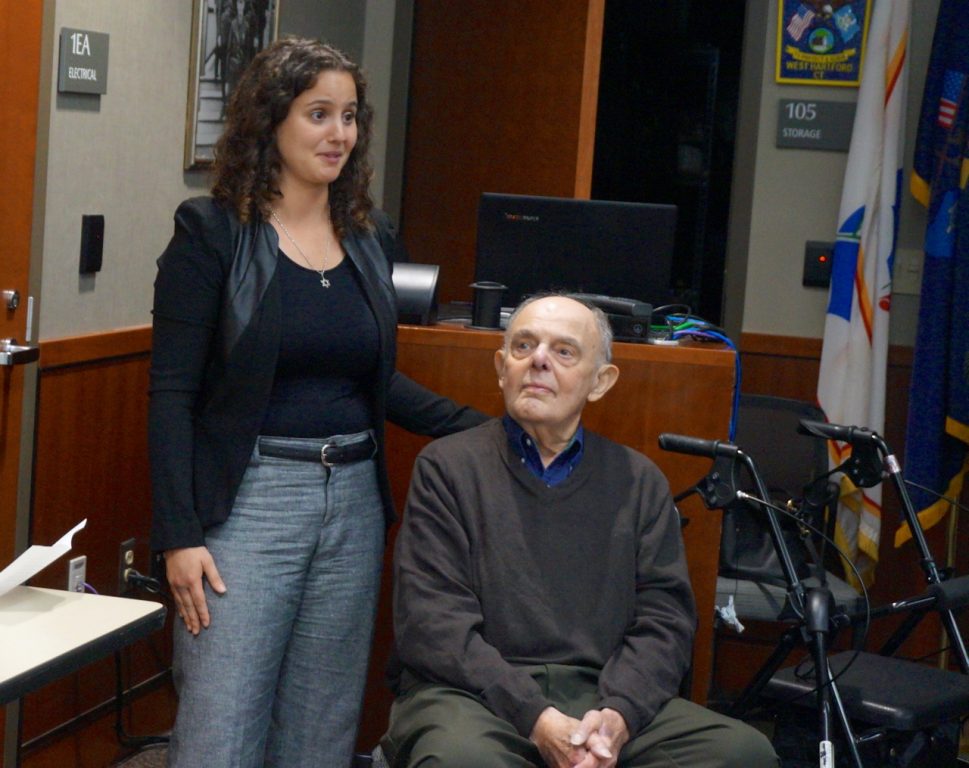 Tracy Glazier with her grandfather, Len Glazier. Tracy said she had no words to express how thankful she was to the team of people who saved her grandfather’s life. Photo credit: Ronni Newton