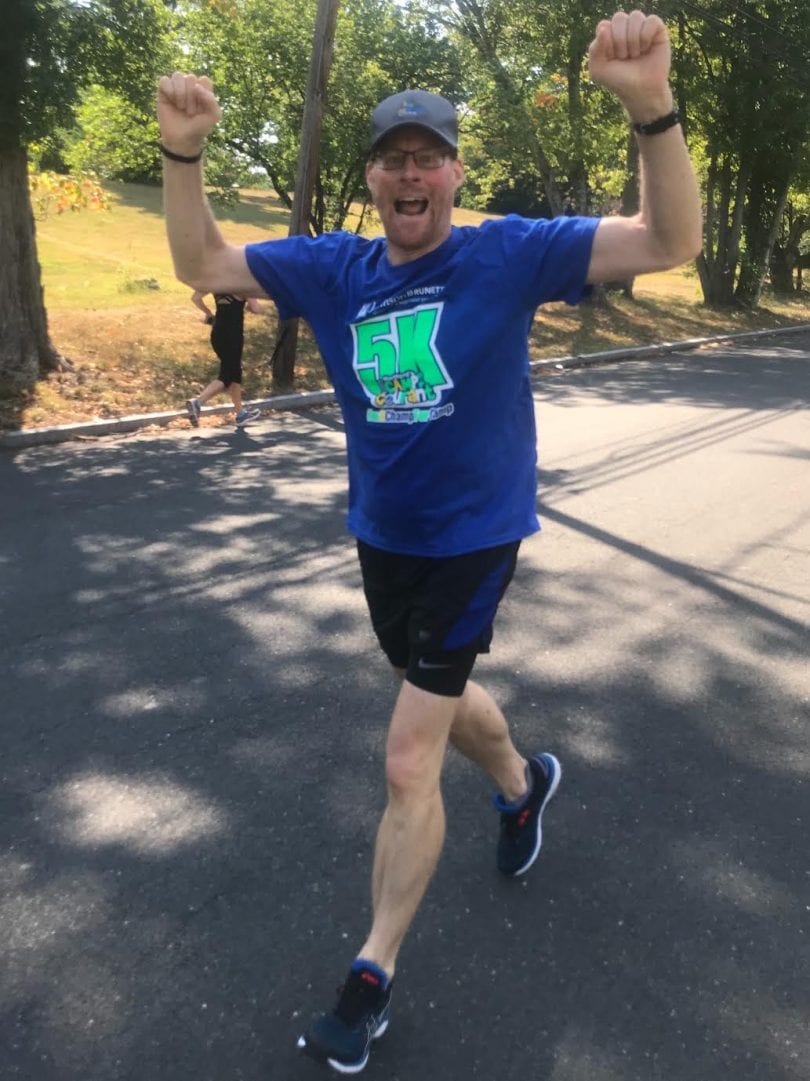 West Hartford resident Barnaby Horton is a member of the ‘Inspiration Team,’ and participating in the ‘Grit & Gutsy 4 Challenge’ which involves running all of The Hartford Marathon races – in the same weekend.

West Hartford resident Barnaby W. Horton is no stranger to fitness or philanthropy. This fall, however, he is taking on his biggest challenge yet.

A member of the 2020 Inspiration Team presented by Bank of America, the 51-year-old Hartford native will participate in the 2020 Eversource Hartford Marathon’s “Grit & Gutsy 4 Challenge,” which takes place Oct. 8-11.

The Grit & Gutsy 4 Challenge includes the 5K, 10K, half marathon, and full marathon distances – a staggering total of 48.6 miles over the course of four days. Every dollar from Horton’s registration fees will benefit Connecticut Children’s Medical Center and Camp Courant, a free summer day camp for Hartford children.

For the past two decades, Horton has worked as a financial advisor for Merrill Lynch, but over the years, he has never stopped giving back to the community where he was raised.

“I grew up in the West End of Hartford on Terry Road. I went to Hartford public schools until high school,” Horton said. “I saw with my own eyes how kids grow up – their lack of access to opportunities, fresh air, and safe playgrounds. Now, as an older professional, it’s something I am very passionate about.” Horton now sits on Camp Courant’s board of directors and regularly contributes to the organization.

Although Horton has played sports since childhood and was a tri-varsity athlete at Loomis Chaffee, where he attended high school, it wasn’t until later in life that he became deliberate about incorporating exercise into his daily routine.

“The real turning point for me came about seven years ago, when I was in my mid-40s,” said Horton.

In the summer of 2013, Merrill Lynch introduced Essential Partners leadership training, a multifaceted initiative aimed at helping employees reach their full potential, both personally and professionally. One particular program Horton participated in called On Target Living ended up having a lasting effect on his everyday life.

“The piece that I really gravitated to was the health and wellness piece – what to eat, how to eat, how to move your body and exercise,” he said. For Horton, the opportunity to adjust his lifestyle came at the perfect time. “I was in the middle of a divorce and I had kids who were adolescents. I was a harried businessman. This program taught me a lot of things, not only about how to eat and move, but also about how to calm myself and prioritize my business and my life.”

Despite his newfound passion for leading a healthier lifestyle, it wasn’t until the spring of 2014 that Horton ran his first race, a 5K that supported Camp Courant. Although he enjoyed participating in the event and was excited to contribute to a cause close to his heart, Horton still remembers the toll that first race took on him physically.

Reservations aside, Horton kept at it, and eventually his perseverance paid off. In June of 2018, he placed third in his division in the Iron Horse 5K in Simsbury. Encouraged by his success, Horton signed up for more races.

In 2020, but like so many events, the races quickly became virtual as a result of COVID-19. Surprisingly, Horton credits the virtual environment for pushing him to start running longer distances.

It was exactly this mentality that led Horton to finish his first half marathon this past June. “I got done with it, and at that point, your brain clicks on and says, ‘You’re not getting any younger here. And someday you’re going to sit on a porch in a rocking chair and wonder what it would’ve been like if you’d ever run a marathon.”

Of his decision to participate in the four-day endeavor as opposed to simply tackling the full marathon, Horton joked, “Why do a little when you can do a lot?” On a more serious note, he added, “It’s been brutal. Training has been four days a week, and every other Sunday morning, it’s another two miles. Two weeks ago, I ran 23 miles.”

As a man who never considered himself a long-distance runner, Horton has certainly come a long way.

“If you had ever told me that I was going to run 23 miles in a morning, I would have told you you’re crazy,” he said. “But you just build up to it. I didn’t think it was possible, but you condition your body and your mind and you do it.”

Regarding his status as a member of the 2020 Inspiration Team, Horton maintains that his primary goal is to serve his community, but he also says that he hopes his efforts will send a message to the broader community about what is possible with hard work and dedication.

“If you can put your mind to it, there’s a good chance you can accomplish just about anything,” he said. “Being committed to providing opportunities for others to be their best selves and just to work really, really hard at it – that’s one way I’ll hopefully be remembered.”

As the date of his first full marathon approaches, Horton says it’s the mental aspect of the race that he’s spent the most time thinking about. “At the end of the day, the idea that I can raise awareness for an organization like Hartford’s Camp Courant and Connecticut Children’s is what motivates me,” he said. “I want to complete the marathon, and I don’t want to let anyone down, least of all myself. The debate I always have when I’m running is, ‘Is this mental? Is this your brain saying you can’t do it, or is it your body saying you physically can’t go on?’”

For Horton, who cares deeply about supporting his community, preparing for race day has come down to putting one foot in front of the other. “I don’t have any sponsors, it’s not like I’m getting paid to do this, so I can stop at any time,” he said. “But I’m not running to impress anyone. For me, the personal satisfaction of completing the challenge is enough.”

As far as the future is concerned, Horton outlined a race schedule for the coming months that includes the Vicki Soto 5K in November – an event memorializing the late Victoria Soto, who was tragically killed in the Sandy Hook Elementary School shooting in Newtown in December of 2012 – as well as Jamie’s 5K Run for Connecticut Children’s Cancer Research, which will be held in Wethersfield.

When asked what’s next for him after completing the Grit & Gutsy 4 Challenge next weekend, Horton laughed. “Well, the obvious answer is to rest,” he said. “I would like to get a full, good night’s rest.” Beyond catching up on some well-deserved sleep, though, Horton says he has no plans of stopping any time soon.

“There’s a real community, a real spirit, a real energy to running with a group of people,” he said. “I’m told the Boston Marathon has time trials, so I don’t think I would qualify. But I think there’s probably another marathon in me.”