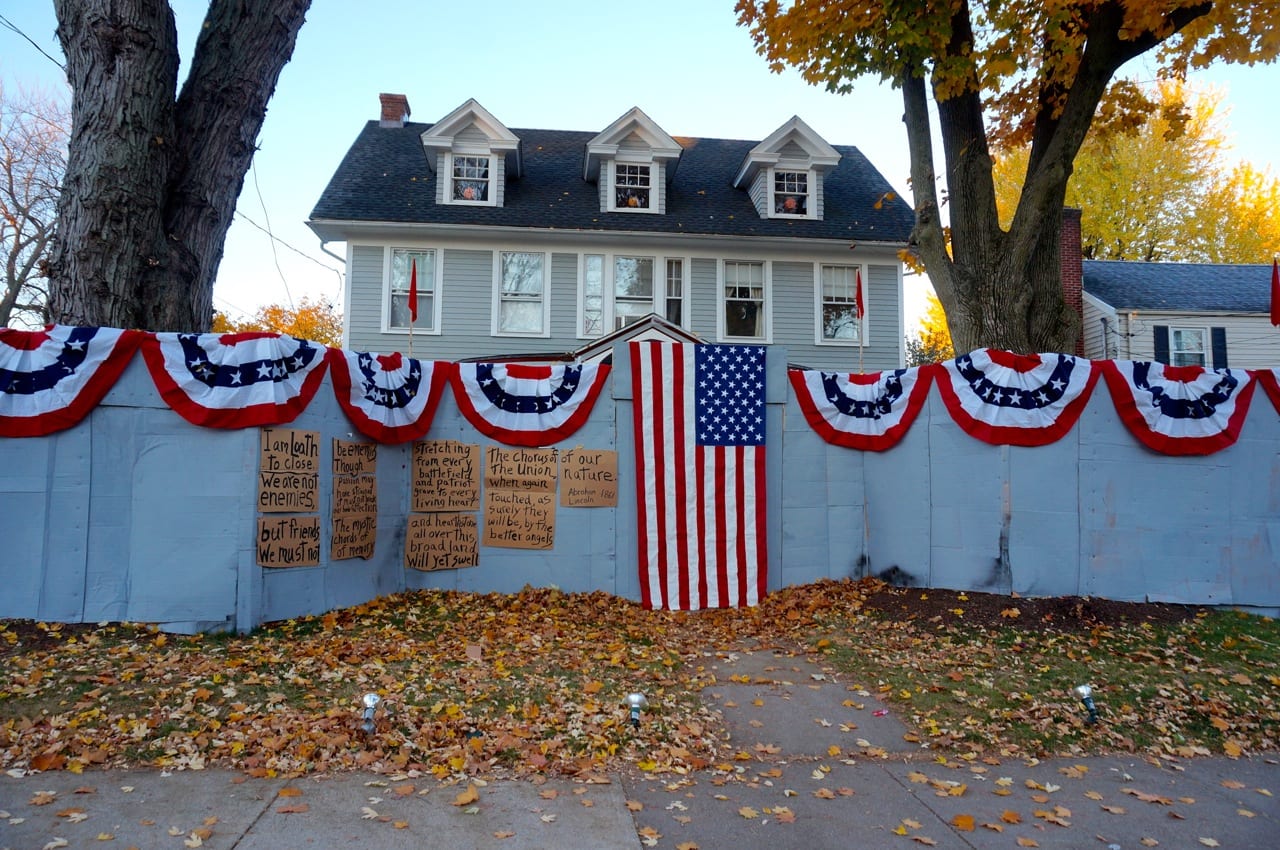 Matt Warshauer's home on North Main Street in West Hartford has been transformed from its politically-oriented Halloween scene with a message of hope for Election Day and beyond. Photo credit: Ronni Newton

Matt Warshauer, a resident of North Main Street in West Hartford, took down the politically-oriented scene he created as this year’s Halloween tableau, but left the ‘Trump wall’ and added a new message in honor of Election Day. 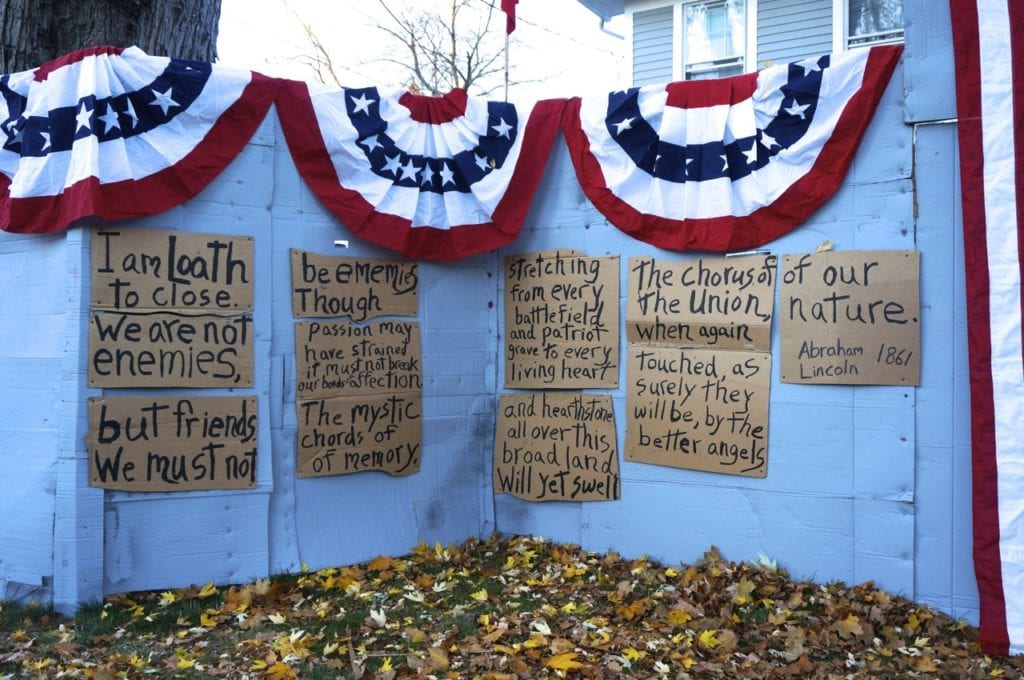 Matt Warshauer of West Hartford has transformed his politically-oriented Halloween scene to an Election Day message of hope with the words of Abraham Lincoln. Photo credit: Ronni Newton

Drivers and pedestrians on West Hartford’s North Main Street awoke to a new scene in front of Matt Warshauer’s house Tuesday morning, with an Election Day message that he hopes all will take to heart.

“We are on a precipice, and if we don’t do something to support each other after the election and instead shout and call each other names we will degenerate into the fate of other republics,” Warshauer said early Tuesday morning.

The “Trump wall” – a major feature of Warshauer’s politically-overt “Halloween scene” that garnered national attention this year – remains on his front lawn, but the barbed wire has been removed, the characters have been put away, and the original statements written on the wall been removed.

The revised rendition of the wall now contains only one message, and it’s a quote from Warshauer’s favorite president – Abraham Lincoln.

“It’s the last paragraph of his first inaugural address,” Warshauer said. Always the professor, Warshauer put Lincoln’s name there for attribution, but didn’t add where it came from because he wants people to think and figure things out on their own.

The quote begins with the phrase: “I am loathe to close.”

“I’m loathe to close. I want this to be over but I’m concerned about the end,” Warshauer said.

Warshauer had considered leaving his original Halloween decorations up through Election Day, but said that when the second “email scandal” appeared to be damaging Hillary Clinton’s campaign, he started worrying that Trump might win. 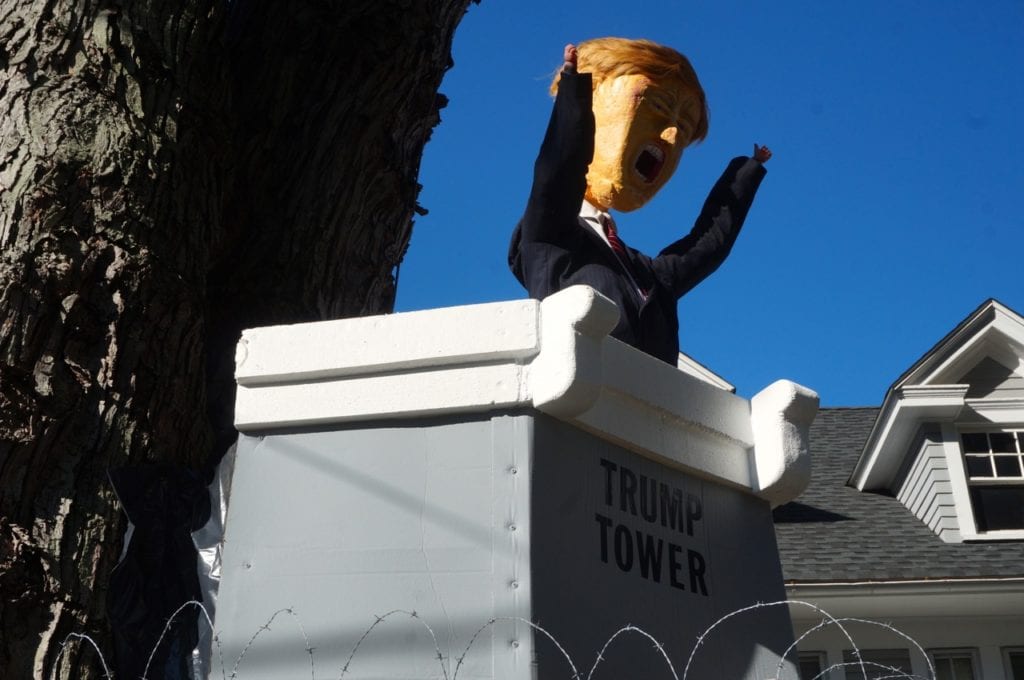 “I was talking to my oldest daughter, Emma, and we were thinking that we didn’t want Trump up there with his fists raised,” Warshauer said. “People would interpret it as victory.”

Warshauer and his daughter instead decided to completely sanitize the wall. His daughter even suggested he paint over the graffiti, and Warshauer happily reported that it only took 10 minutes with a paint roller. The red lights have been changed to white lights.

He and Emma, a senior at Hall High School who just celebrated her 17th birthday, made the transformation late Monday night.

Warshauer said he had American flags, and plenty of bunting left over the from Civil War Halloween scene he created in 2011, and said the final inspiration came from the following message he received from a young girl in response to this year’s display: “The wall reminded me of Lincoln’s quote, ‘A house divided against itself can not stand.’ It feels like there are walls everywhere because of this election. It’s disappointing and a little scary to see people so divided. And building an actual wall between two countries is not right. People need to come together to be stronger. I hope your wall teaches people that they should be more united.”

Warshauer said that Lincoln’s words that are now displayed on the wall are a message that people need to hear, about the concept of union and not letting passion rule us.

“I just felt like with everything that’s going  on and all of the negative stuff on the wall that I didn’t want to end on that note,” Warshauer said. 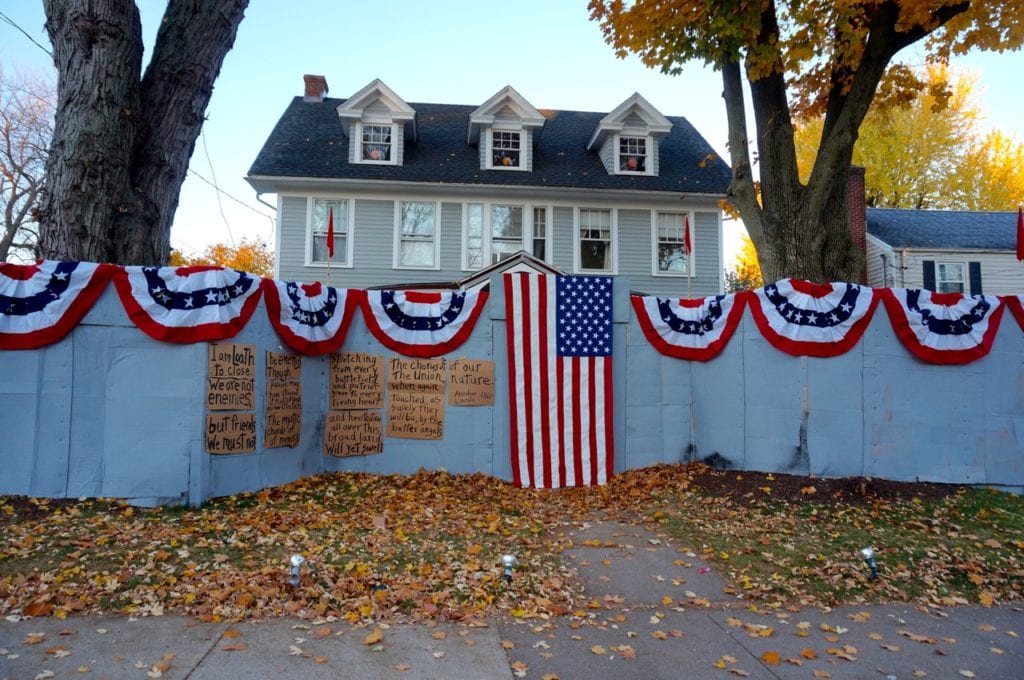 Matt Warshauer’s home on North Main Street in West Hartford has been transformed from its politically-oriented Halloween scene with a message of hope for Election Day and beyond. Photo credit: Ronni Newton 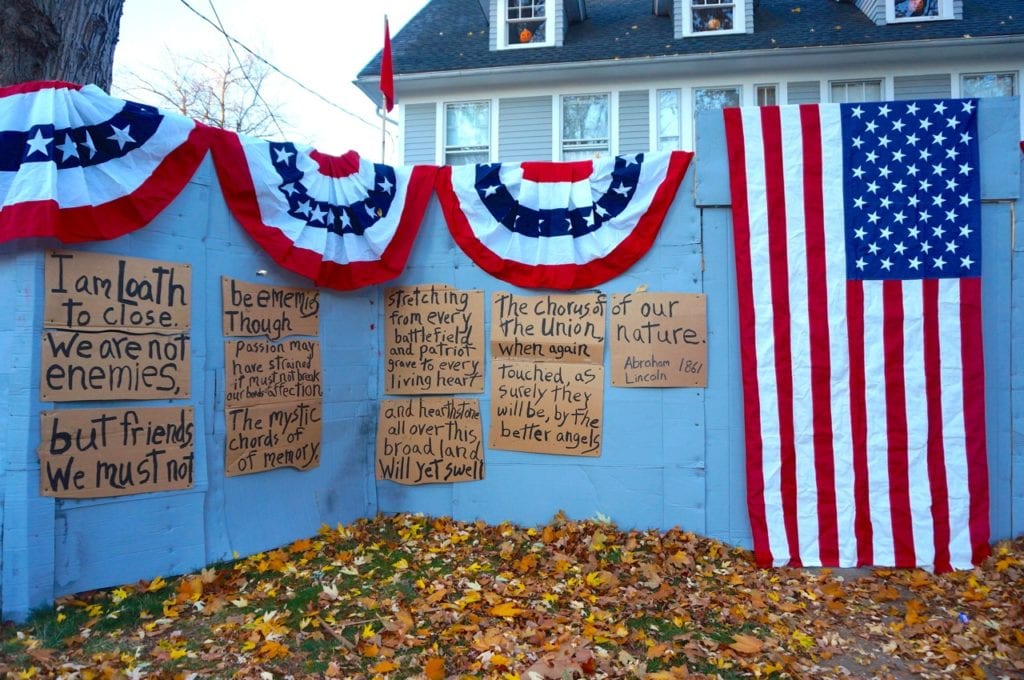 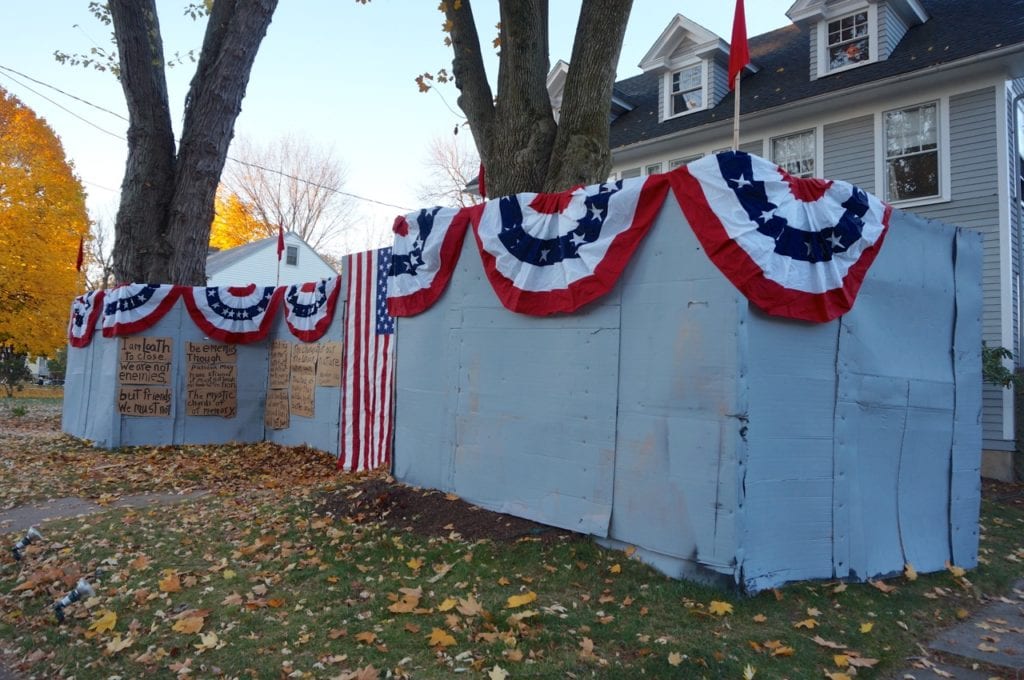