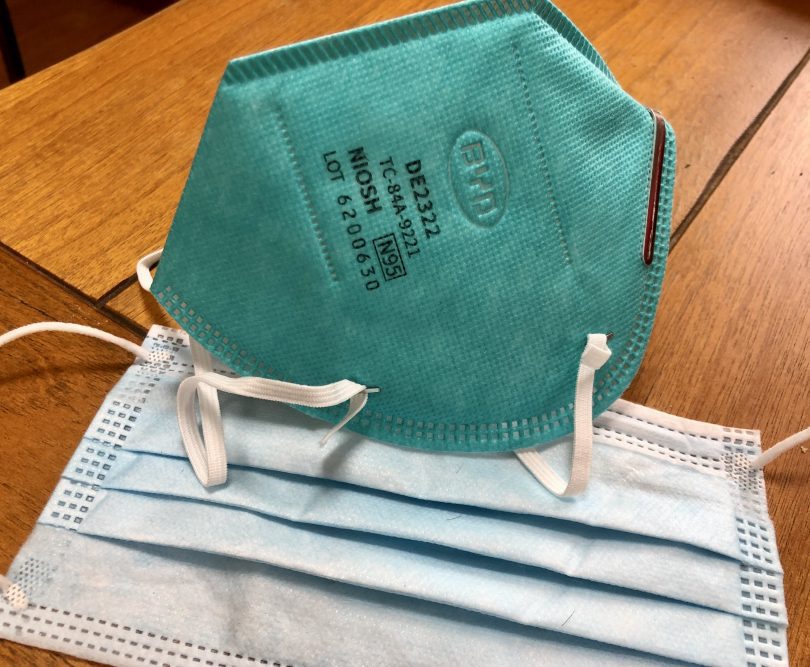 West Hartford will have a universal indoor mask mandate in effect beginning at noon on Jan. 6, 2022. Photo credit: Ronni Newton

Amid the rising cases of COVID-19, the Town of West Hartford will implement a universal indoor mask mandate effective Jan. 6, 2022.

COVID-19 cases have been skyrocketing in West Hartford, as well as throughout the state, the region, and the country, and town leaders announced Wednesday that a universal indoor mask mandate will be implemented at noon on Thursday, Jan. 6, 2022, as part of the effort to combat the surge in cases being caused by the highly contagious omicron variant.

“It’s something we’ve been considering for weeks,” Town Manager Matt Hart said Wednesday, and after consultation with public health and safety officials is something he feels is warranted now. The omicron variant, while in most cases causing less severe illness, is also more contagious and has resulted in the town’s number of positive cases growing exponentially.

The town is seeking to strike a balance, as the new reality appears to be that COVID-19 is not going to disappear any time soon, Hart said.

According to data released by the state on Tuesday, West Hartford has had 7,368 reported positive cases since the pandemic began, 197 new reported cases in the past day alone, and 727 over the past week. That data does not include at-home rapid test results, and many who receive positive results from those tests don’t bother getting a PCR test. 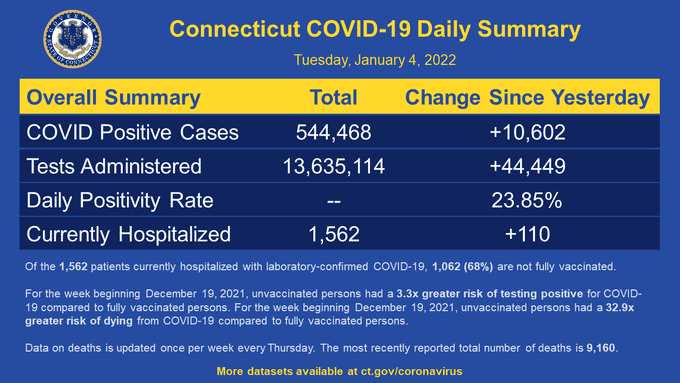 The state publishes a 14-day average daily case rate per 100,000 of population every Thursday, and according to the Dec. 30 report West Hartford’s rate was 75.7, the highest it has ever been.

Hart said that Aimee Krauss, the director of the West Hartford-Bloomfield Health District, manually calculated an updated rate based on data from Dec. 19 through Jan. 1, and that rate is 106.1. Until last week, West Hartford’s previous highest rate was for the period Dec. 27, 2020 through Jan. 9, 2021, when the rate was 44.2. A rate of 15 puts a municipality on high “red alert” status. 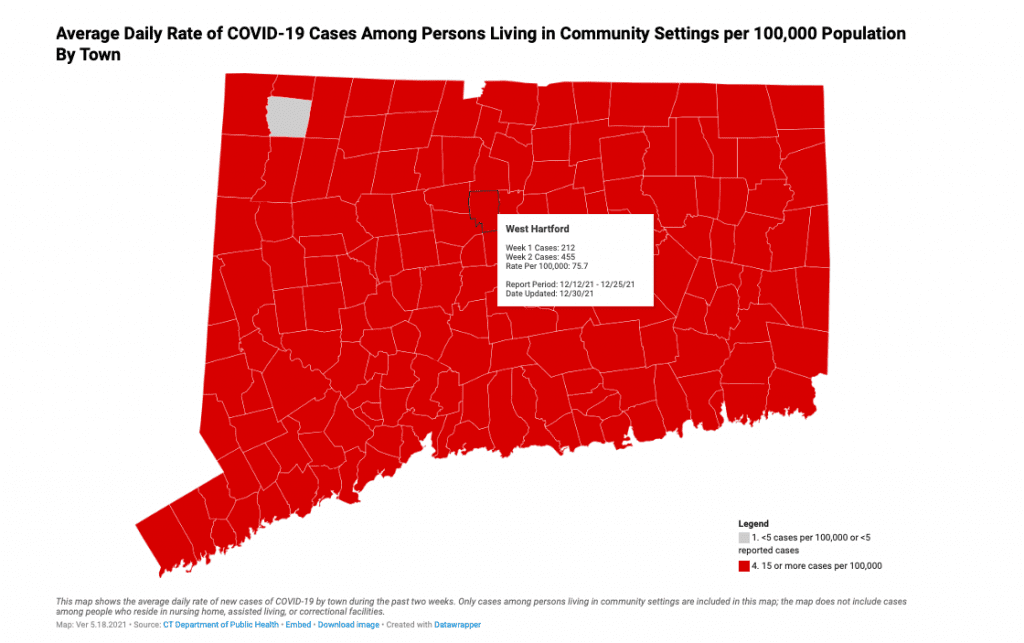 As cases began to spike again, West Hartford had reinstated a universal indoor mask mandate in public buildings as of Dec. 20, 2021, and on Dec. 23, 2021, the West Hartford-Bloomfield Health District issued a mask advisory, urging everyone to wear masks when indoors with people outside of their household, not just in public spaces but also in residential settings.

The executive order implementing a universal indoor mask mandate signed by Hart on Wednesday applies to indoor public places. The town’s announcement states: “The order only applies to indoor public places, which include anywhere that persons from different households are in the same space. Residential dwellings are exempt, however residents are strongly advised that they should still mask-up anytime they are indoors with persons who are not part of their own household. The order also includes exceptions for persons unable to wear a mask for medical reasons – including children under the age of two – and persons who are eating or drinking.”

Mayor Shari Cantor continues to advocate for a regional or statewide universal mask mandate, which as of Monday the governor said he does not plan to put into place. But while many have been voluntarily masking in West Hartford, officials feel it’s necessary to take the next step.

“We are all frustrated by the sudden and dramatic increase in COVID due to the Omicron variant,” Cantor said Wednesday. “Many businesses have implemented a mask requirement in order to keep their employees and customers safe. This town wide mask requirement for public indoor spaces is one step in the mitigation of the spread of this highly contagious variant.”

COVID-19 does not stop at borders, Cantor said, and hospitals and healthcare delivery systems are regional assets that serve multiple communities.

“This is challenging for municipalities to individually implement requirements,” Cantor said. “A broader regional or statewide approach would be helpful to assist our hospitals in responding to the increased burden they are facing.” As of Tuesday’s report by the state, there were 1,562 patients with COVID-19 in hospitals throughout the state, with 110 of those having been admitted since the previous day.

“Our priority is to keep our community safe, while keeping schools, municipal facilities, and businesses open,” said Cantor. “We believe this step is necessary given the current trajectory of infection rates and the number of neighboring communities implementing similar requirements. This is a temporary measure, and we will constantly evaluate the need to continue the requirement.”

The City of Hartford on Monday implemented a universal indoor mask mandate. “Masks indoors for a month, folks,” Hartford Mayor Luke Bronin said on Twitter. “Most people in Hartford already wear them. But with test positivity over 20%, we should do whatever we can to help bring the numbers down — even at the margins. Most important thing is still to get vaccinated & boosted.”

Bloomfield’s mask mandate took effect Wednesday. “We try to work in concert with Bloomfield because we are part of the same Health District,” Hart said, and he hopes that the mandate in the three towns will have an impact.

“We are seeking to do what we can do to flatten the curve and mitigate the spread,” Hart said. “Our approach has been, and continues to be, education first, enforcement second, only if warranted,” he said, adding that he is very appreciative of the high level of voluntary compliance already in place.

The mandate does not have a sunset clause built in, but Hart said it will be lifted if the governor’s executive order, which gives the town the authority to issue a mandate, is not extended or replaced when it expires on Feb. 15 – or when the town has four consecutive weeks with an average daily case rate below 15 per 100,000 of population.

Also as part of the town’s mitigations strategy, on Tuesday West Hartford’s Community Emergency Response Team (CERT) distributed roughly 4,000 N95 masks during a drive-through event. A limit supply of available rapid at-home test kits and masks are also being distributed to symptomatic residents and to students and staff at town schools.

“Please stay home if you are experiencing any symptoms – and if you have not been fully vaccinated and boosted make sure you do to protect yourself, your loved ones, and your community,” Cantor said.

“The hope had been that we’d be largely past the impacts of the pandemic by now, but that’s not true,” Hart said Wednesday. Leaders at all levels are still figuring out how to live with it and best manage with the tools we have.

“That’s vaccination, and masking when appropriate, so we can still live our lives and the economic activity can continue,” Hart said, adding that it’s also critically important for children to remain in school.

“We have to learn to live with this,” Hart said.

A copy of the Town Manager’s executive order requiring universal indoor masking may be found below as a PDF.