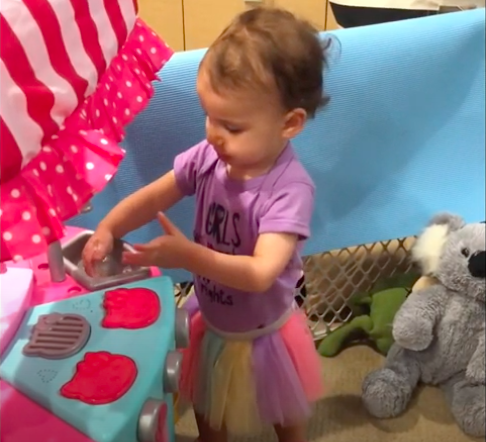 Allegra Levy, a West Hartford native, has won the John Lennon Songwriting Contest with ‘Wash My Hands,’ a new children’s anthem to help kids cope with the COVID-19 pandemic.

Singer-songwriter Allegra Levy won the Aug. 3 John Lennon Songwriting Contest for her children’s song “Wash My Hands,” an upbeat new anthem for our times selected among musical submissions with the theme “Stuck at Home.”

Levy, who is based in New York, wrote the song to encourage youngsters to stay safe and keep calm during the coronavirus pandemic.

A West Hartford native, Levy contracted COVID-19 herself in March and was sick for weeks. After recovering, she was inspired to write the song while quarantining at home with her entire family, including her 20-month-old niece Diana. She later created a music video for the song featuring Diana – along with countless other adorable children and one very cute cat – washing their hands, wearing masks, and demonstrating other safety precautions.

“Kids are clearly picking up on our anxiety,” said Levy. “I wanted to show them how to stop the spread in a way that would make it not only non-threatening, but fun.”

The songwriting contest honors John Lennon and helps fund the John Lennon Educational Tour Bus, which gives students a chance to create music. It is made possible by Yoko Ono Lennon.

“This song is perfect for young children, who often need visuals and musical messages in order to retain the information they are being taught by adults,” said Dr. Allison Mark, a clinical psychologist practicing in Miami. “Children also benefit so much from validation and unity.”

The simplicity of Levy’s lyrics makes them an ideal teaching tool, she added. “This is a song that parents can easily remember and recite to their children, who will catch on quickly to the melody,” she said. “It’s also perfect for early childhood education programs that return to school in the fall and need something catchy they can sing every morning to start the day.”

Levy, who makes a cameo appearance at the end of the music video, more commonly performs and writes jazz. The New York Times has called her “fresh … exotic … and far beyond the ordinary.” JazzTimes magazine dubbed her “a double-barreled talent” and “definitely one to watch.” Her fourth album from SteepleChase Records, Lose My Number: Allegra Levy Sings John McNeil will be released on Aug. 15.

But she has recently branched out to explore other genres. Last spring, she released “Love Is a Bird,” an EP of songs she termed “feminist pop.” One of its tracks won first place in The Great American Song Contest, in the adult contemporary division. But with the rise of the pandemic, Levy’s focus is now largely on younger listeners and how to keep them COVID-free and calm.

“It is our duty to protect our future generations,” she says. “The only way through this is together, and that means everyone from grandparents down to the youngest among us must do their part. Music is a vehicle for change, and if there is any time that we need change, it’s now.”