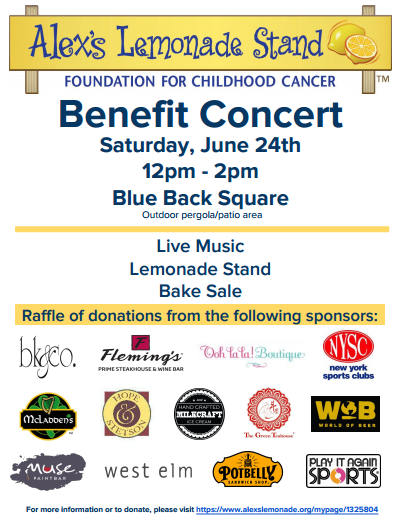 In a continuing effort to raise funds and awareness for the fight against childhood cancer, Taylor Schumann of West Hartford, CT, will host a benefit concert on Saturday, June 24 from noon to 2 p.m., in the courtyard at Blue Back Square.

Schumann, who grew up next door to ALSF founder Alexandra “Alex” Scott in West Hartford, has fundraised for ALSF in the past because of this personal connection. “Growing up with Alex and her amazing family inspired me to play my part in raising money for childhood cancer,” said Schumann.

Schumann hopes to raise $1,000, which funds more than two days of research.

For more information or to donate, visit the ALSF Charity Concert fundraising page.

Childhood cancer is a general term used to describe cancer in children occurring regularly, randomly and sparing no ethnic group, socioeconomic class, or geographic region. Childhood cancer extends to over a dozen types of cancers and a countless amount of subtypes. Just a few of these cancer types include: Ewing’s sarcoma, glioma, leukemia, lymphoma, medulloblastoma, neuroblastoma, osteosarcoma, retinoblastoma, rhabdomyosarcoma, and Wilms’ tumor. In the United States, childhood cancer is the leading cause of death by disease in children under the age of 15. Every day, approximately 250 kids around the world die from cancer, accounting for 91,250 losing their lives to the disease every year.

Alex’s Lemonade Stand Foundation (ALSF) emerged from the front yard lemonade stand of cancer patient Alexandra “Alex” Scott (1996-2004). In 2000, 4-year-old Alex announced that she wanted to hold a lemonade stand to raise money to help find a cure for all children with cancer. Since Alex held that first stand, the Foundation bearing her name has evolved into a national fundraising movement, complete with thousands of supporters across the country carrying on her legacy of hope. To date, Alex’s Lemonade Stand Foundation, a registered 501(c)3 charity, has raised more than $140 million toward fulfilling Alex’s dream of finding a cure, funding over 690 pediatric cancer research projects nationally. For more information on Alex’s Lemonade Stand Foundation, visit AlexsLemonade.org.