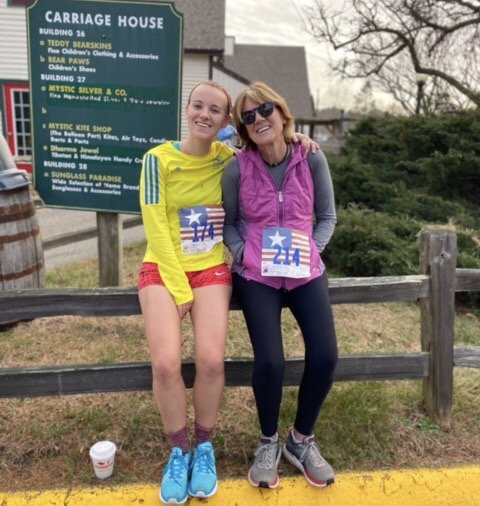 Shea Williams, a West Hartford native who now lives in New York City, was diagnosed with COVID-19 and has been recovering at her apartment.

For the past 10 days, she has been quarantined in her New York apartment recovering from COVID-19, the novel coronavirus that as of Sunday has sickened more than 330,000 worldwide. More than 14,000 to date have died from the virus.

She’s a sustainability analyst at a consulting firm in Harlem, and she’s getting her master’s degree in sustainability management at Columbia University.

She grew up in West Hartford, where her family still lives, and she is a former standout cross country and track athlete at Conard High School who also ran at Division I Fordham University, from which she graduated in 2018.

She ran the Boston Marathon in 2019 in just over 3:13, which qualified her for this year’s race, and she’s been training hard through the winter.

She has no idea how she got the coronavirus.

“I am feeling much better,” Williams said in a phone interview Sunday. “I think this is really the end of it.”

West Hartford’s first positive case was announced Friday, the same day Williams received her own official test results and made that information public on her social media accounts. Many thought she was the West Hartford case, but she was tested in New York, and said she hasn’t been in West Hartford since Christmastime.

“I have no idea how I got it,” Williams said. She lives and works in Harlem, but doesn’t ride the subway to work or grad school because it’s close enough to walk. She said that some of the cases in New Rochelle – which is a hotbed of cases in the state – have ties to Harlem, so that could have been the source of what appears to be community spread.

“I had a little bit of a cough for a few days,” she said of her initial symptoms. But it’s allergy season, and she didn’t worry too much. Then, a few days later, she woke up with a sore throat.

“This was before everyone was really quarantining,” she said, but she didn’t go to work that day and instead made an appointment to see her doctor in New York.

When she told the doctor her symptoms, she was surprised to be offered a COVID-19 test. “I knew tests were hard to get,” she said, and she was glad to be offered the opportunity to be tested.

That was Friday, March 13. She was told the results could take four to five days – even as much as a week – to come back. “That was really the most frustrating part of this,” Williams said.

She went back to her apartment and waited.

“I have not left my home since that day,” Williams said.

“I had to take on the mental and emotional burden of this. Who had I seen?” She was so afraid she had unknowingly infected others.

“It took a full week, and by then most of the sickness was gone,” she said.

“At the beginning it felt like a normal sickness, like a cold,” she said. But she also had a headache, and body aches that were more extreme than she would have with just a cold. She didn’t really have shortness of breath – other than when she was really tired or talking a lot – but said it wasn’t extreme enough that she would have otherwise noticed it.

She didn’t have a fever when she went to see the doctor, and doesn’t think she ever had one – but she doesn’t know for sure because she doesn’t have a thermometer and wasn’t able to acquire one.

Then came an unusual symptom.

“I totally lost my sense of smell and taste. It completely went away, completely disappeared,” she said. “That was really odd, and frustrating.”

She was still waiting for the results but after googling she found that others with coronavirus had the same symptoms.

“Two days before I got my results I started to see that a lot of people had reported the experience of losing taste and smell,” said Williams.

Also, she said, as opposed to any other sickness she had previously she didn’t feel like she was getting any better. Usually, she said, you wake up and feel better after a few days, but this really lingered.

Her taste and smell is returning, and she still has some fatigue, but the other symptoms are gone.

Williams shares her apartment with two other women, and said she only left her room for the bathroom or kitchen. “I stayed in my room as best as I could,” she said, and when she was in the common areas she was fanatical about wiping everything down.

Her two roommates also self-quarantined, initially only leaving to go on walks and runs while exercising proper social distancing. Once Williams got her positive results, they didn’t leave the apartment either.

Neither roommate has had any symptoms, nor has anyone else with whom she knowingly had contact.

Williams had stocked up on food before she got sick, and they’ve had meals delivered a few times, so no one has had any need to leave.

If she’s symptom-free by Wednesday, Williams said she will be able to end her quarantine and will restock the food supplies which are getting low. Her roommates haven’t had any symptoms at all, but will need to quarantine a bit longer to be sure.

“We have a chart. We are taking this very seriously,” she said.

Her parents were really worried, Williams said. “I think they were most worried when I didn’t know. They wanted to come take care of me, but had to take care of me from afar – over FaceTime,” she said.

“It was one of the worst things, having to tell people at school and work,” Williams said. She thinks that in part because of her diligent quarantining once she had noticeable symptoms, it’s kept anyone she knows from acquiring the coronavirus.

Of course she said that’s not proven, however, since no one else she knows has been tested.

“I was so lucky,” said Williams. “When I posted my story on Instagram so many reached out. It made me feel so relieved I was able to get [tested].”

Williams misses running, but hopes to be back to it soon. “I was training for the Boston Marathon … I was pretty relieved it was postponed. And I really love summer training.” She will run the race at its new date in September.

Williams lives on a fairly busy street and said she’s been dismayed to see people still hanging out in groups. “More are wearing masks now, but still …”