West Hartford is one of the top 476 districts selected nationwide by Best Communities for Music Education (BCME).

Submitted by Bernard Kavaler, Connecticut by the Numbers

Thirteen Connecticut school districts are among 476 districts across the United States being recognized as among the Best Communities for Music Education (BCME) for 2016. Now in its 17th year, BCME recognizes outstanding efforts by teachers, administrators, parents, students and community leaders who work together to ensure access to music learning for all students as part of the school curriculum. 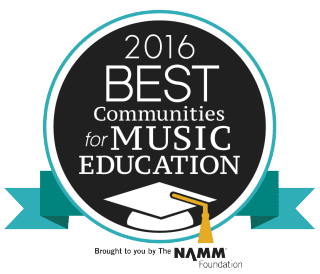 The organization’s website, citing a 2015 national report, indicates that 83 percent of teachers and 73 percent of parents do not see music education as a luxury, and believe that cuts to music programs are detrimental to student success.  Citing an earlier study, Namm points out that students in high-quality school music programs score higher on standardized tests compared to students in schools with deficient music education programs, regardless of the socioeconomic level of the school or school district.

In furtherance of music education, the NAMM Foundation and the Make Music Alliance are inviting interested businesses and organizations to organize a Make Music Day event. The annual global festival of music, “encourages first-time and seasoned music makers to come together on the longest day of the year to ‘Just Play’ and it is the perfect occasion to bring all people together to make music,” officials said.

Make Music Day is an annual celebration that occurs each June 21, when people in more than 700 cities around the world make music together on the summer solstice.