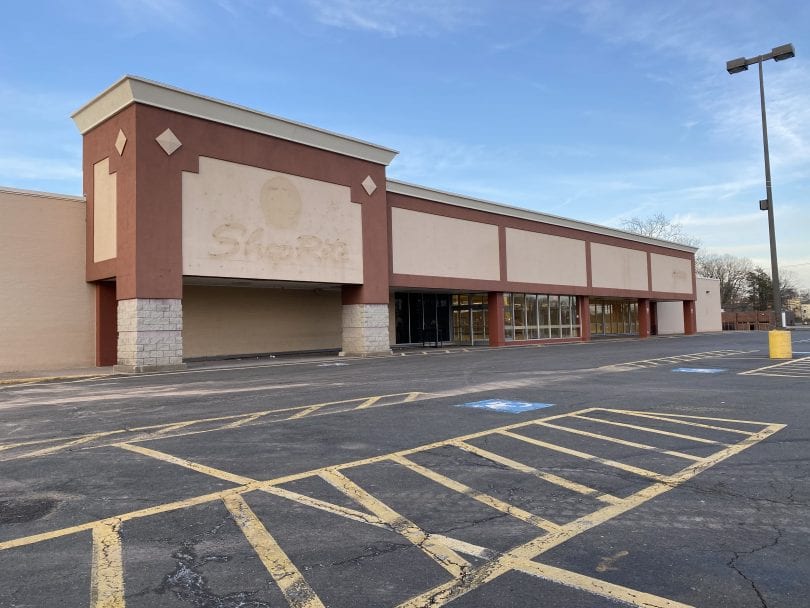 The former ShopRite store on Kane Street in West Hartford will be used as a COVID-19 vaccination clinic. Photo credit: Christine Stuart

The Town of West Hartford and the West Hartford-Bloomfield Health District are relocating the public vaccination clinic from Town Hall to the former ShopRite store, and a closed clinic will be held this week for Hillcrest area residents.

The Town of West Hartford is continuing a multi-pronged approach to vaccinating eligible residents in the community, and announced this week that a large scale vaccination clinic will be opening in April at the site of the now-vacant ShopRite store at the corner of Kane Street and Prospect Avenue.

At Tuesday night’s Town Council meeting, Town Manager Matt Hart said the town and the West Hartford-Bloomfield Health District has arranged with Wakefern, the parent company of ShopRite, to use a portion of the former store as a vaccination clinic during the month of April and likely into May.

Since January 12, the Health District has been holding weekly vaccination clinics in the Town Hall auditorium. The location is not just for West Hartford residents, but is one of the sites available to those who register through the Vaccine Administration Management System (VAMS).

“At Town Hall we are able to vaccinate roughly 600 people if we have adequate supply,” Hart said Tuesday, but the larger space at the former ShopRite will be able to accommodate double that – 1,200 people at a single clinic – provided the vaccine supply is available.

”Another benefit to this clinic is we will be able to leave it set up,” Hart said Tuesday. The facility won’t have to be broken down and packed up in between clinics since the space won’t be used for other purposes.

The former ShopRite is being made available by Wakefern rent-free, Hart said. He said the other costs of running the clinic will be the responsibility of the town, but are expected to be reimbursed by FEMA.

The ShopRite property is an ideal location for a vaccination clinic, Hart said, with convenient access to I-84. It’s also walkable from many West Hartford neighborhoods and accessible to the Parkville section of Hartford.

The state is working to ensure that vaccination efforts are being prioritized for residents in areas with a high Social Vulnerability Index (SVI), which “refers to the potential negative effects on communities caused by external stresses on human health. Such stresses include natural or human-caused disasters or disease outbreaks,” Hart said in his Town Manager Report to the Council.

The Centers for Disease Control and Prevention (CDC) has assigned the Kane Street area a moderate-to-high level SVI score of 0.5639. The location also borders an area with a high-level vulnerability index of 0.9989, Hart said. 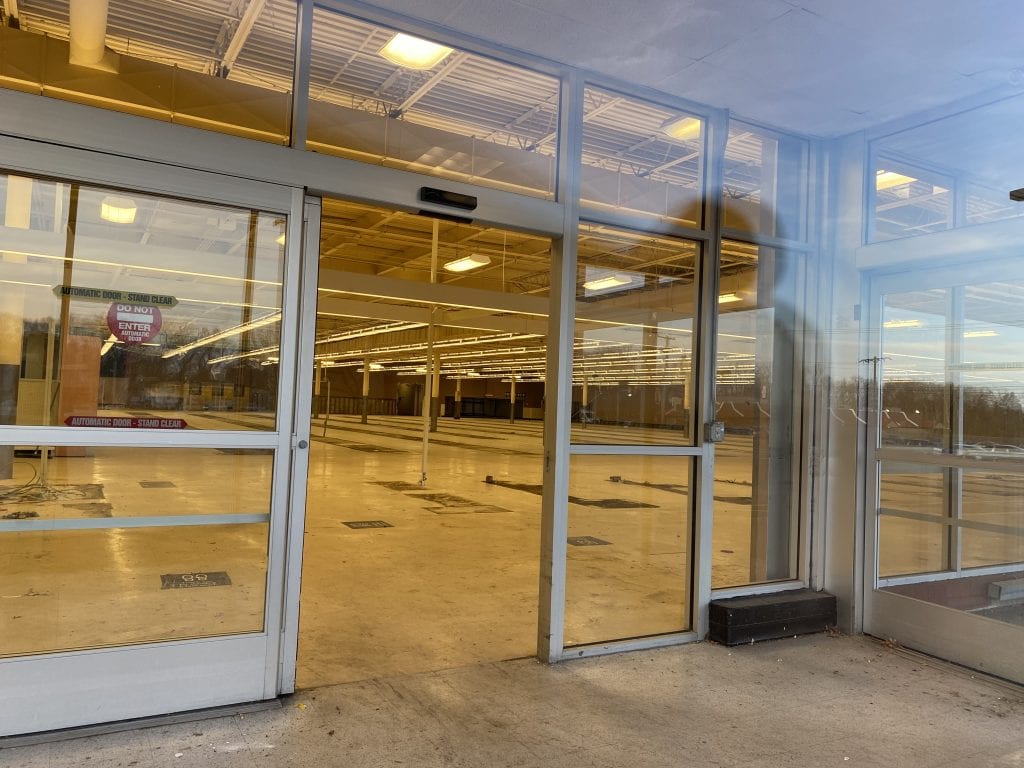 The interior of the former ShopRite store on Kane Street in West Hartford has been emptied and is being readied for use as a COVID-19 vaccination clinic. Photo credit: Christine Stuart

The former ShopRite is being cleaned, WiFi is being checked, and equipment and supplies are being delivered to prepare for use as a clinic. It is expected to open in roughly two weeks – coinciding with the eligibility for vaccination of all remaining Connecticut residents over the age of 16 .

Once it opens, eligible Connecticut residents will find the clinic listed among available locations on the VAMS website.

The clinic will be held at least once a week, and the hours may be adjusted to ensure that it’s accessible to those who need it, Hart said, with weekend hours as a possibility.

“It is a big lift and a fairly quick turnaround,” Mayor Shari Cantor said Tuesday, expressing her thanks to Wakefern and all involved with arranging for the clinic.

In addition to relocating the public vaccination clinic, the town is taking extra steps to ensure that residents of the Hillcrest area have ready access to COVID vaccinations, and West Hartford Fire Department personnel went door-to-door Saturday as part of an outreach effort.

“We as a fire department, Health District, and Social Services want to get the vaccine to everyone who is eligible,” said Fire Inspector Marsha Adell, who is the public information officer responsible for a closed clinic that will be held Friday at the Elmwood Community Center from 2-6 p.m., specifically for residents of the Hillcrest area. Residents of Hillcrest Avenue, Steven Street, Abbotsford Avenue, Hollywood Avenue, Stanwood Street, Stafford Street, Bristol Street, Mario Avenue, Lynn Court, Merlin Avenue, and 918-970 New Britain Avenue, are eligible.

Adell said uniformed personnel, including Fire Chief Greg Priest and Community Service Officer Troy Shipley, were among those who knocked on doors to inform Hillcrest area residents about the closed clinic and help them register.

“We have a vested interest in the community outside of fighting fires. The safety of our community is paramount,” Adell said. She said having West Hartford Fire Department members in uniform made it more likely that people would open their doors.

They distributed flyers, in both English and Spanish, and registered those interested for the vaccination clinic right on the spot for a first dose of the Moderna vaccine on March 26. Second doses will be scheduled for the same time, four weeks later on April 23.

“We’re trying our best to take away the excuses,” Adell said, to make sure it’s as accessible as possible. The clinic will be held on the second floor of the Elmwood Community Center, and the elevator will be available.

There has been some hesitancy, Adell said. “Some need a little bit of motivation,” she said, but it’s mostly because people say they don’t like needles. The concern hasn’t seemed to be about possible side effects, and she said no one has mentioned conspiracy theories as a reason to fear vaccination.

“The word that it works is getting out there,” Adell said.

Thus far between 30 and 40 people have signed up for Friday’s clinic, and Adell said there is much more capacity since 150 doses are available. Eligibility is limited to those ages 45 and up, who live on the specific streets in the Hillcrest area.

Some individuals who had previously scheduled a vaccine for several weeks out will instead be attending the Friday clinic since it will allow them to get their shot sooner, and closer to home.

Anyone who lives on one fo the designated streets and is eligible can call 860-613-5000 to register. A PDF of a fact sheet that has been created in English and Spanish is attached below.

The fact sheet is also being distributed at the Food Pantry pick-up, at grab and go meal distribution, and through the schools.

Hart reported that the town’s Vaccine Information Line, staffed by librarians, has fielded roughly 825 calls since opening on Feb. 8. Staff has assisted residents with a variety of questions about the vaccination process.

The town also launched the At-Risk Community Health (ARCH) program on Feb. 10, and a Health District nurse, along with a West Hartford paramedic, have thus far vaccinated 45 residents who have mobility issues that prevent them from getting to a clinic. Personnel remain on site for at least 15 minutes to ensure there are no adverse reactions.

Second dose appointments are also being handled through the ARCH program.