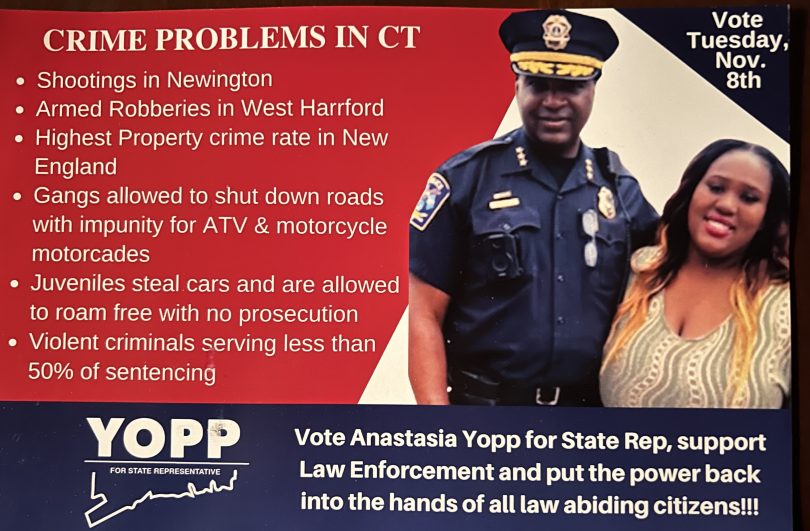 A photograph of West Hartford’s police chief appeared on a mailer sent to residents of the 20th State House District.

A campaign mailer sent by Anastasia Yopp to residents of the 20th State House District, which includes portions of West Hartford and Newington, included a photograph on one side of the candidate with West Hartford Police Chief Vernon Riddick, along with statements about “Crime Problems in CT,” and the chief wants the community to know that he was unaware of the use of the photo on the mailer until he was advised about it on Tuesday.

Riddick said he would not have authorized the use of the photo on a mailer, or to imply that he endorses any political candidates.

“I did not endorse candidate Anastasia Yopp or authorize her to include my photograph on the political mailing that was recently sent throughout the district,” Riddick told We-Ha.com.

The photo with Riddick, which also appears on Yopp’s campaign website, was taken at this year’s Celebrate! West Hartford, which was held the weekend of June 12 and 13 on the grounds of West Hartford Town Hall. Riddick, who attended the festival and also held a meet and greet with members of the community, acknowledged that he did pose for the photo with Yopp, which was taken by a third party. Several weeks after the photo was taken it was also posted on the Yopp campaign Facebook, Instagram, and Twitter pages, along with messages about crime.

In a text message following a phone conversation, Yopp stated: “As a first-time candidate, I was unaware that I was somehow implying an endorsement by using a photo that had already been widely circulated online. I respect Chief Riddick immensely, and I was honored that he would take a photo with me. I certainly did not intend to cause harm.”

In response to a question from We-Ha.com how the photo came to be approved for use in her campaign mailer, Yopp declined to authorize any further statement.

Yopp is a resident of Newington and currently serves as a first-term member of the Newington Board of Education and chair of the board’s Finance and Budget Committee. Due to a realignment General Assembly districts, which occurred in response to the 2020 census, the 20th District now includes a portion of Newington as well as the southern portion of West Hartford. The district is currently represented by Democrat Kate Farrar, who is running for re-election.

Farrar provided the following statement when asked for comment about the mailer: “I respect our West Hartford and Newington police officers who keep our communities safe every day. Ms. Yopp’s willingness to use our Chief of Police for her own political gain raises significant questions about her judgment. Her claims about public safety in our towns are also factually incorrect and diminishes the hard work of our police departments.”