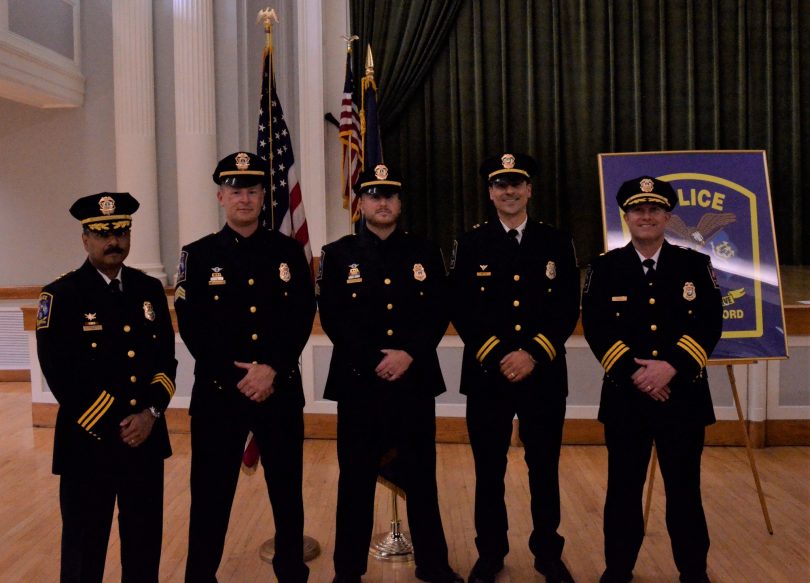 Three members of the West Hartford Police Department have been promoted, and five new officers have been hired. 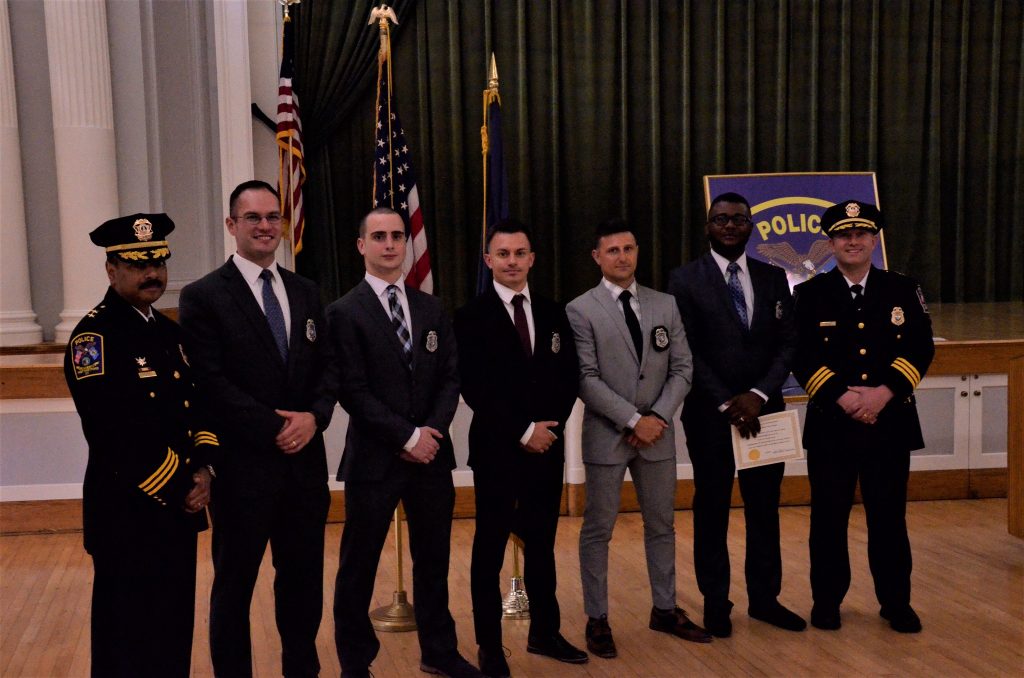 The West Hartford Police Department held a combined swearing in and promotional ceremony at Town Hall on June 15, recognizing a cohort of five new officers as well as three department members who have been promoted.

West Hartford native Daniel Moffo has been promoted to captain.

Moffo, a member of the West Hartford Police Department since 2006, has worked in the Traffic, Community Relations, and Detective Divisions, and served as a Field Training Officer. He was promoted to the rank of detective in 2014, was named a sergeant in 2015, and was promoted to lieutenant in 2o19.

He was assigned to the Professional Standards Unit in 2021, where he supervised internal and background investigations for new departmental personnel and is currently the accreditation manager.

Moffo recently earned an M.S. in criminal justice from Central Connecticut State University, and will attend the FBI National Academy in Quantico, VA this July.

A 2002 graduate of Conard High School, he earned an undergraduate degree in psychology and sociology from Drew University in 2006, where he played Division III lacrosse and served as one of the team’s captains.

Sgt. Christopher Lyth grew up in Glastonbury, graduated from Glastonbury High School, and earned a bachelor’s degree in marine and coastal policy management from the University of Rhode Island in 2009 while also competing for the rowing team and serving as captain his senior year.

Following college he coached the Glastonbury boys rowing team until he joined the City of Boston’s Park Rangers, belong a member of the mounted unit.

When Lyth returned to Connecticut, he joined the West Hartford Police Department in 2012. He already had a longtime connection to West Hartford, where his father, Bill, is a longtime business owner/employee of manufacturing related businesses located in Elmwood.

Lyth has been a member of the West Hartford Police Honor Guard since 2014, has worked all three shifts in the Patrol Division, is certified to ride police mountain bikes, and has been trained in crisis intervention, high visibility traffic enforcement, and crime scene photography. He has been a Field Training Officer since 2018.

Lyth was assigned to the Traffic Division in 2019 as an accident deconstructionist, responsible for investigating life-altering and fatal incidents including shootings, fatal collisions, and even a plane crash.

Lyth’s peers selected him to become a trustee with the West Hartford Police Officers Association in 2021, and he remains a member of the board.

Sgt. Peter Caless, who grew up in Bolton, CT and graduated from Eastern Connecticut State University with a degree in business administration, has been a member of the West Hartford Police Department since 2014.

Caless worked all three shifts in his three years with the Patrol Division, and has served as a Field Training Officer, and as a member of the Honor Guard, and Drone Aviation Team.

Since 2020, Caless has been part of the Traffic Division, and a member of the Accident Reconstruction Team responding to serious incidents involving injuries or fatalities.

Caless is also a member of the Connecticut National Guard, is currently a captain within the 192nd Engineer Battalion.

Off. Benjamin Santandreu, grew up in Buffalo, NYU graduated from St. Francis High School, and earned a bachelor’s in criminal justice with a concentration in law enforcement administration in 2017.

After graduation he entered active duty with the U.S. Army as a military police officer, where he served in a variety of law enforcement and administrative positions.

Off. Patrick Lacruz is originally from Port-of-Prince, Haiti, and grew up in Queens, NY. He has served as an officer with the New York City Police Department, assigned to the 110 Precinct in Queens.

A graduate of John Jay College of Criminal Justice with a B.S. in criminal justice and a minor in corrections, Lacruz speaks four languages other than English – French, Haitian, Creole, and Spanish.

Off. Dustin Belfiore grew up in Canton, MI, but has lived in many parts of the country including California (San Francisco and Los Angeles) where he competed in the combat sport Muay Thai, and in New York City where he taught Muay Thai and boxing, and worked as a personal trainer.

Belfiore has worked for the Savannah (Georgia) Police Department for the past three years, most recently serving with the  violent crimes task force and as a member of the SWAT team. He has been recognized with several awards, including a life-saving award from the Chief of Police in Savannah.

Off. Sean Waltman is from Athens, PA, and after graduating from Athens Area High School in 2018 he attended Hartwick College in Oneonta, NY where he earned a bachelor’s degree in criminal justice with a minor in computer science, graduating in May 2022.

He said he determined a career as a police officer was “his calling” after participating in a law enforcement internship program during college.

Off. Adnan Sadiku grew up in Plainville, CT, and after graduating from Plainville High School in 2017 enlisted into the United States Air Force.

He was stationed in Omaha, Nebraska for four years, serving as a Security Forces member doing flyaway security on the National Airborne Operations Center for high ranking individuals such as the Secretary of Defense and Joint Chiefs of Staff.

Sadiku is currently pursuing his bachelor’s degree at Quinnipiac University, and is expected to graduate in 2023.