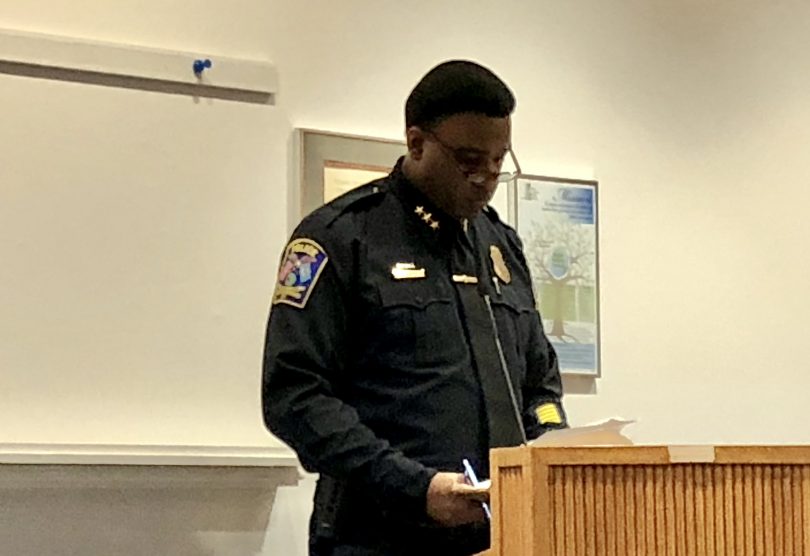 West Hartford Police Chief Vernon Riddick spoke to the Town Council Tuesday night, detailing some of the measures the department is taking to address criminal activity and community concerns.

The West Hartford Town Council’s Public Safety Committee has been discussing security at houses of worship in town, and Town Manager Matt Hart invited Police Chief Vernon Riddick to speak to the full Council Tuesday night to provide an update about that issue as well as what is being done to address car burglary, theft, and recent carjackings in the community.

“We are a town but we have some city problems … but make no mistake about it this town is safe, it’s just not a utopia,” Chief Riddick said.

At last week’s Public Safety Committee meeting, two FBI agents attended as guests and discussed security issues that have become more acute in recent months. Hart said he was particularly impressed with how the relationship and communication between federal and local agencies has evolved over time.

Hart said that he and Riddick will be reaching out to leaders of houses of worship in West Hartford and convening a roundtable discussion “to talk about security practices, to get their input, to better hear their concerns.” Council members will be invited, but it will not be an official Council meeting, he said.

A similar roundtable may be planned for business owners, Hart said, beginning with the owners of larger shopping centers “to talk about building security and what we call target hardening,” and what can be done with a camera registry program.

Riddick said Bristol and Waterbury have both kicked off a camera registry program, and West Hartford will be moving forward with a similar program, with residents as well as business owners voluntarily giving police access to their video surveillance equipment. It doesn’t mean that police will be watching videos all the time, he said, “but it allows us the opportunity to expand our resources so when an incident does occur we can go to these locations and have access to a database” to expedite an investigation.

After briefing the Council on what he called “a very disturbing robbery” at Harvey’s Cafe Market Monday night that remains under investigation, Riddick addressed the recent carjackings and carjacking attempt in Bishops Corner, and measures that the department is taking to increase safety in the community.

On Nov. 11, 2019, there was a carjacking in the Whole Foods parking lot in Bishops Corner, where a woman was approached by four or five males who ended up stealing her car, Riddick said. Information about that incident had not been previously released to the press.

“We have a very strong lead on that crime and we hope that things continue to go forward to secure an arrest warrant,” Riddick said.

Last Thursday there was an attempted carjacking where a 28-year-old woman fought off the suspects followed by an actual carjacking in Bishops Corner where a 61-year-old woman was forced out of her car and the vehicle was stolen.

“[It’s] very troubling for all of us,” Riddick said, and noted that the vehicle was located the next day with the assistance of Hartford Police. Three juveniles were arrested immediately in connection with being in the stolen car, but detectives continued to investigate.

Riddick said to keep the community safe, extra attention and patrol assignments are being provided in the Bishops Corner area, but resources are being stretched thin as the department is also extending extra coverage to houses of worship and schools.

Initiatives include having members of the Community Support Unit (CSU) that was created about nine months ago and traffic support stagger their hours to ensure that there is seamless coverage throughout the day. The department has also continued a community awareness initiative through social media, reminding residents to lock their doors and homes and secure their valuables. West Hartford Police have also been collaborating with other area departments.

“It’s very important to remember this and remind everyone that this is not just a West Hartford issue. This is a statewide issue and a regional issue that is occurring,” Riddick said.

Following last week’s carjacking incidents, and after discussion with the town manager, Riddick said, the decision was made to create an “auto theft task force.”

At 9:30 p.m. Tuesday, the seven-member task force – which includes detectives and officers from traffic support – had its kick-off meeting. The auto theft task force will be supplementing the work of the CSU, with 12 officers focused on “targeting these heinous crimes that are occurring out there,” Riddick said.

The task force includes uniformed and plain clothes personnel in marked and unmarked vehicles, he said. The kick-off included a refresher on policies, including regarding when it is appropriate to engage in pursuit and public and officer safety.

Riddick assured the Council that the department will be “fiscally responsible” in assigning extra patrols. “There’s not an open checkbook for overtime,” he said, and with support of the police union officers are being permitted to change their hours. He commended the police union for their flexibility.

“The West Hartford Police Department and the officers that we have here … are extremely dedicated, focus, and willing to sacrifice themselves for the benefit of others,” Riddick said. Many of the detectives didn’t even go home after being called in and working all night on the Harvey’s Cafe case. He said he is extremely proud of the West Hartford personnel.

Riddick also provided year-end stats from the CSU, noting that it’s “not all doom and gloom.”

Since its inception in February 2019 through the end of 2019, CSU has made 109 arrests: 44 felony arrests and 65 misdemeanor arrests. Of those, 53 were drug-related arrests.

“That’s what’s out there folks,” Riddick said, noting that while West Hartford is a “town” it has some “city problems” and there is demand and supply. Police have been working very hard to ensure West Hartford remains one of the safest towns/cities in the U.S.

Overall year-end stats for part one crime in West Hartford (murder, rape, robbery, aggravated assault, larceny, auto theft, and negligent homicide) is down 31% in 2019 compared to 2018, said Riddick. Violent crime is down 24%. “The evidence of the hard work and the fruits of the labor and the data are trending in the right way,” he said.

So far this year there have been eight stolen cars, however, Riddick added, all of which were unlocked and had the keys left in the car. Two were left running with the keys in them. “You will hear me to continue to, ad nauseam, ask for a little bit of help and our stats can go down dramatically if people can just lock their doors and take the keys out of their cars.”

Riddick also took questions from the Council, and Republican Mary Fay asked about the impact of the state’s “catch and release” approach to juveniles. Riddick responded that even stolen cars “are not a victimless crime,” and said while he is all about second chances, there needs to be repercussions for actions and a line need to be drawn. “We need to do better than what we’re doing,” said Riddick, expressing his passionate about the need to prevent escalation.

“We’re going from open vehicles and keys in the car, taking these cars, to now people inside the vehicle pulling people out. That’s why this task force is put together. We’re not going to the next level,” Riddick said. “We’re going to put a stop to this now.”

Democrat Carol Blanks, who chairs the Council’s Public Safety Committee, praised the department’s efforts and said she recommends expanding the social media initiative, increasing involvement with businesses, and also putting out information on how people can best respond in dangerous situations.

Republican Chris Williams said it appears West Hartford has moved into the realm of a city, and knows there is only so much the police can do because of state laws regarding juveniles that “are not working for us” and leading to escalation of crimes such as carjacking.

Williams said there needs to be a push on the town’s state delegation to effect change. “Unless we have disincentives that’s going to continue.”

Riddick said he and the department appreciate assistance with putting pressure on the state, and while he testified on a bill that would have moved juvenile cases to adult court after a certain number of strikes, it died in committee.

Minority Leader Lee Gold voiced approval for the department’s approach with the task force, and asked about the possibility of the juvenile arrested for the carjacking being treated as an adult. Riddick said he does not expect that will happen.

Gold also asked about the financial strain of extra initiatives, and Riddick said he needs to be both a manager and a leader. It’s difficult, but he said he tries to use grant money whenever possible, and reiterated his appreciation for the union’s flexibility.

Democrat Liam Sweeney said he appreciates the department’s responsiveness to dealing with issues, out-of-box thinking, and commended the “#9PM” effort to get people to lock their cars. He encouraged the community not to get hysterical about things that appear on social media, but rather “please look at the facts.”

The public needs to understand “it’s a partnership, not just a collaboration,” Riddick said. People need to lock their doors, and if they see something, say something. “It really works … good has to overcome evil, I believe that,” he said.

Deputy Mayor Leon Davidoff agreed that while West Hartford is safe, “the world we live in here is not a utopia” but we do recognize when something is amiss and have professionally-trained people in place to respond and prepare appropriately.

Davidoff said Riddick should not need to apologize for overtime, that resources will be committed to ensure safety, and he thanked him for getting involved on the state level with juvenile justice issues “because the status quo is not working.”

Mayor Shari Cantor praised the way Riddick and the department deliver and understand the importance of working together.

She said the carjacking really rocked her, and asked how people should react, whether it is advisable to fight back.

Scream and yell, Riddick recommended, but if someone is trying to steal your car and tells you to get out of your car, then get out because tangible items are not worth it.

He also advised people to be aware of their surroundings. It’s better to risk embarrassment by closing your windows if a group of people are approaching rather than take a risk, he said.

Cantor also added that she appreciates the department’s efforts to educate business owners about cameras, immediate elevation of security at houses of worship, and the chief’s willingness to share his perspective at the state level.

“I know you’re fighting for us and you put your lives on the line every day,” she said.

Although the roundtable approach will be new, the West Hartford Police Department previously held a security forum for faith-based organizations, Riddick said. In November 2018 the department, along with representatives from the FBI and Department of Homeland Security, gave a security presentation, fielded questions, and followed up with onsite security assessments of various houses of worship. West Hartford Police have continued to offer security assessments as requested.