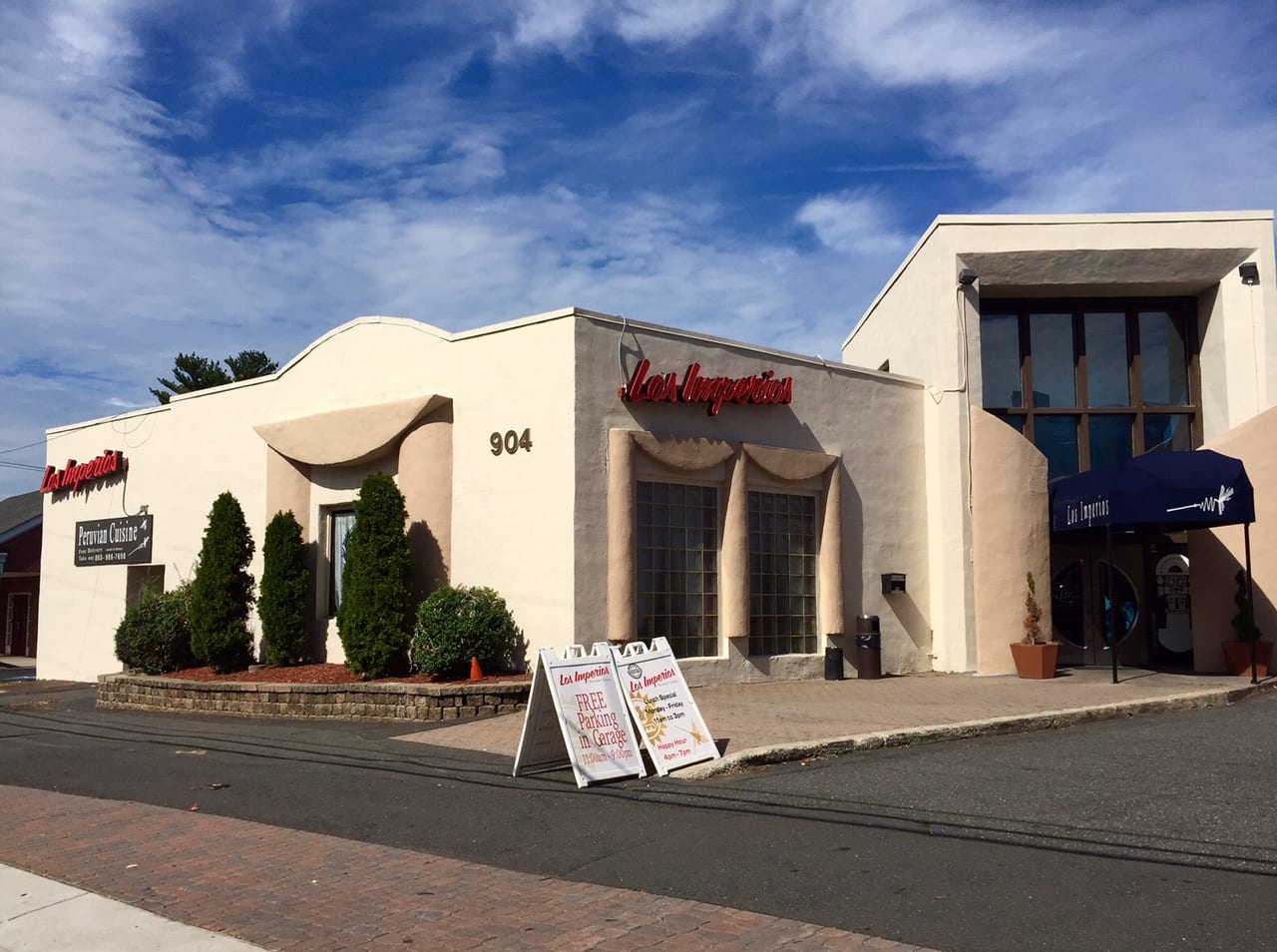 [Updated] West Hartford Police Chief Tracey Gove issued an ultimatum to Los Imperios this week, and informed the owner that the business would have to pay for the cost of a police detail four nights per week unless neighborhood complaints cease.

West Hartford Police Lt. Samuel Ferrucci and Det. Kevin Harrison hand-delivered a letter from Chief Tracey Gove addressed to Los Imperios Restaurant and Bar owner Ernesto Leon on Wednesday, informing him that complaints from neighbors of the 902 Farmington Ave. business have continued and unless they end immediately, the business will need to pay for police detail for all nights the establishment has a DJ.

Gove’s letter, dated May 1, 2017, notes that the department has continued to receive complaints from neighbors about the business – including eight noise complaints last weekend alone.

In addition to issues concerning excessive noise from patrons leaving late at night and in the early morning hours, Gove stated in his letter that complaints have also been made about illegal parking, garbage left behind, fights, and drug and alcohol use.

An email from a Milton Street resident, sent April 29 to Los Imperios with a copy to West Hartford Police, a copy of which was provided to We-Ha.com, stated that the resident has been “dealing with noise, broken bottles, people yelling, people even peeing on my neighbors lawns and in the road for over two years. I am woken up every single weekend and usually I’m awake from the time people arrive around 11 PM until the time police have to ask people to leave which is usually close to 2 AM.” That email was accompanied by photographs of discarded food wrappers and cups, as well as cigarettes, liquor bottles, and used feminine products left on the side of the road or on the lawn.

There have been also two incidents related to Los Imperios and involving handguns in the past, Gove stated. He said in his letter that police “have repeatedly brought to your attention the negative impact your business is having on the neighborhood, and yet you have been unable to properly address the situation.”

Los Imperios has recently discontinued free valet parking, something which police say has exacerbated the situation because more patrons now park on neighborhood streets. “Since the restaurant has no parking this is pushing patrons further into the neighborhood and seems to be generating more complaints,” Assistant Police Chief Robert McCue said. 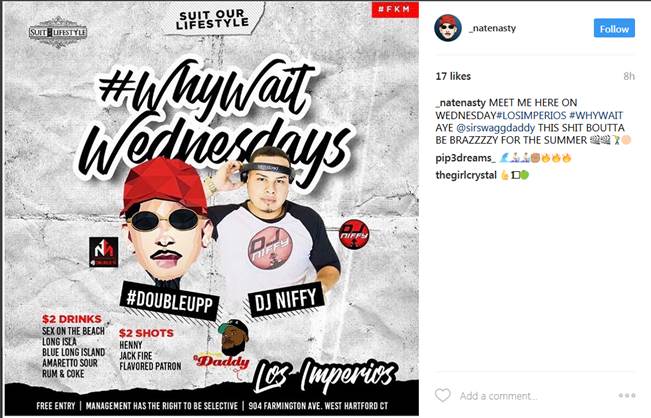 In an attempt to maintain control, West Hartford Police have been stationing officers at Los Imperios on busy nights – typically Thursdays, Fridays, and Saturdays. The establishment now has a DJ on Wednesday nights, making that night busy as well.

McCue said that the department has been taking officers off their regular beats to monitor Los Imperios, which has been causing some coverage issues.

Last weekend there was an incident elsewhere in town involving a pedestrian who was struck by a car, McCue said. Although the particular incident resulted in only minor injuries, the timing required that police officers be pulled from Los Imperios.to provide coverage. “With no officers in the area at closing we believe this contributed to some of the complaints we were receiving,” McCue said.

“The department can no longer provide this type of coverage free of charge as it is stripping resources from the rest of the community,” Gove informed Leon in his letter.

Attorney Rodvald Jones, who represents Los Imperios, said Friday evening in a phone interview that he and his client believe the town’s actions are unconscionable.

“My clients are astonished by this latest event with the town because they thought they were doing everything right,” Jones said. “”My clients are very surprised and can’t believe it.”

Jones has been out of town on vacation, but said he anticipates responding accordingly as soon as he returns next week.

In January, following the second handgun incident, Gove sent Leon an official warning letter as a first step under the terms of the entertainment ordinance the Town Council passed in October 2016.

Gove’s latest letter informs Leon that unless complaints cease immediately, he will invoke the next step in enforcement under the terms of the entertainment license: determining the number of officers needed for security detail and providing that coverage at the expense of the business.

Gove has determined that Los Imperios would require two officers, plus cruisers, from 8 p.m. until closing on Wednesday, Thursday, Friday, and Saturday night, “to maintain order in the neighborhood on each night that a DJ is playing in connection with your entertainment license.”

On one recent evening where there was a DJ at Los Imperios, the establishment was at capacity and according to police there were roughly 50 people waiting in line outside. McCue said the department is not in a position to continually provide coverage of Los Imperios three or four nights a week because it impacts other duties and coverage of other parts of town.

“We think it is reasonable and the responsibility of Los Imperios to pay for the police coverage if these complaints continue and if [Leon] wishes to provide DJ entertainment to his patrons,” McCue said.

The cost of the police detail, Gove informed Leon in his letter, would be $1,362 per night, payable each night to the town by cash or check. According to the entertainment ordinance, police detail “shall initially be required for no more than four (4) weeks,” and once police detail is required at the expense of an establishment, the need for the detail must be reviewed in a four-week cycle until the chief determines that the detail is no longer needed.

In a case report filed after the letter was delivered, Ferrucci and Harrison reported that “Mr. Leon stated that he would be considering bringing back the valet service each night he has a DJ in an effort to quell noise complaints.”

According to the entertainment ordinance, Leon has five business days from the date of the delivery of the letter (May 3) “to present any evidence … which he or she believes is relevant to the decision of whether to order a police detail.”

In addition to enforcing the entertainment ordinance, the Town of West Hartford has gone to court to seek injunctive relief against Los Imperios for violation of zoning ordinances.

On Jan. 30, 2017, Superior Court Judge A. Susan Peck granted a permanent injunction was granted which allows the town to fine Los Imperios $250 each time the establishment violates the town’s prohibition against bottle service.

According to Deputy Corporation Counsel Kimberly Boneham, in November 2016 attorneys for both parties agreed to the town’s request for an injunction regarding cover charges and restriction of entry to only patrons over age 21. Citations for those violations now carry a fine of $500 rather than $150.

McCue said in an email Friday that since the entertainment ordinance has been in place, Los Imperios has had two documented violations.

The first was when a DJ did not stop playing music at least 3o minutes before closing. “This was causing a large group of patrons to leave at once,” McCue said.

The second violation was refusing to allow entrance to a patron who could not prove she was at least 21. A restaurant must be open to the public, McCue said. “They cannot refuse entry based on an age restriction. And through the court process they also agreed to no 21-and-up restriction.”

McCue said that in both cases West Hartford Police detectives issued a warning and documented the case.

For reasons unrelated to zoning or the entertainment ordinance, Los Imperios was closed for a period of time in late January 2017 when the State Department of Labor issued a stop-work order, citing reasons related to workers’ compensation coverage that included failure to secure payment for coverage, failing to secure coverage that meets requirements, misrepresenting employees as independent contractors, and materially understating or concealing payroll.

In September 2016, Los Imperios had its liquor license suspended after a joint letter from Gove and West Hartford Mayor Shari Cantor was sent to the Department of Consumer protection detailing incidents of non-compliance and disturbances that have been taking place for nearly two years – including 11 fights and assaults and 39 disturbances.

The entertainment license issued by the Town of West Hartford is separate from the licenses that Los Imperios has to serve food and liquor, and even if suspended or revoked would not prevent the business from continuing to operate as a restaurant. It is the only license over which the town has jurisdiction, and does not impact the establishment’s permission to serve either food or alcohol subject to the the terms of those licenses.

Gove told Leon in his letter that he looked forward to “addressing the situation so that [the need to hire police officers] can be prevented.”