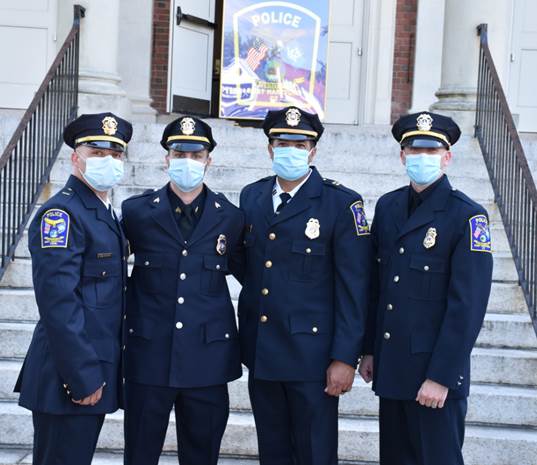 The West Hartford Police Department honored four members who have been promoted during a first-ever outdoor ceremony. 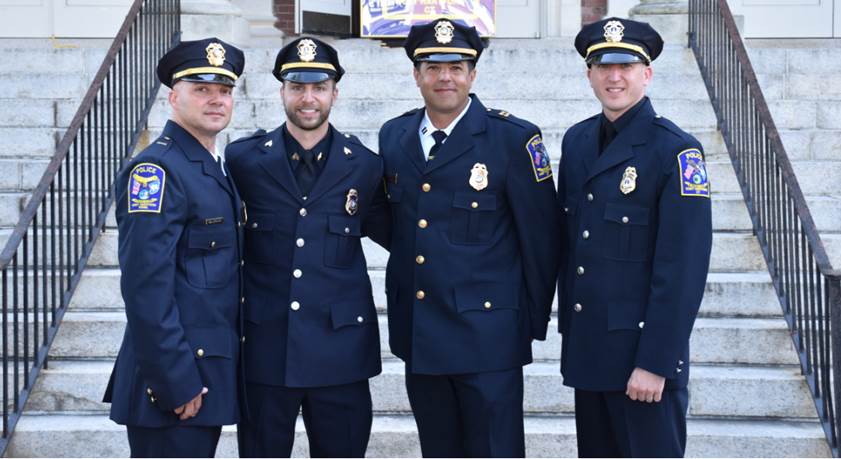 The West Hartford Police Department honored four individuals who have recently been promoted on Wednesday morning, holding the ceremony outdoors on the steps of West Hartford Town Hall where there was plenty of space for family and friends to attend but maintain safe physical distancing.

Promotions are typically celebrated in Council chambers, with a packed room, but due to the COVID-19 pandemic the Town Hall building remains closed to the public and masked family members, friends, and other department members instead stood on the lawn as Assistant Chief Dan Coppinger shared the achievements of the honorees. 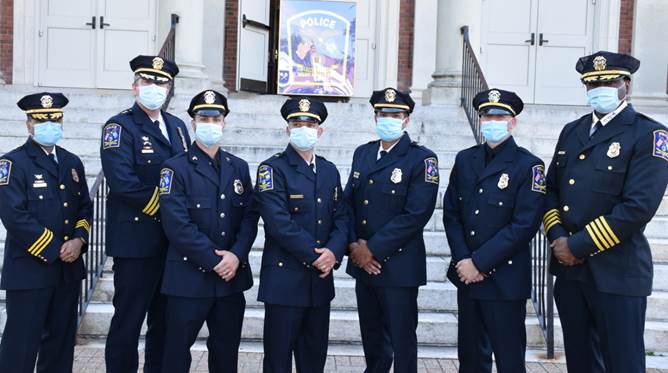 Gagnon was assigned to the Patrol Division from 2009 through 2014, and became a firearms instructor and assisted with departmental training and instruction throughout the region. He has been a field training officer since 2012.

In December 2010, Gagnon was selected as a member of the Emergency Service Unit (ESU), and has received specialized training as a police sniper, completing Level 1 and Level 2 law enforcement counterterrorism programs at the Direct Action Resource Center in Arkansas. He is currently a team leader for ESU.

From 2014-2017, Gagnon served as a member of the Community Interaction Team, and his work with other members “contributed to the seizure of a large amount of narcotics, firearms, and drug proceeds, as well as the apprehension and arrest of hundreds of dangerous criminals,” Coppinger said.

He served as a member of the Auto Theft Task Force which operated in early 2020, an effort that led to the recovery of numerous stolen vehicles, the arrest of numerous car thieves, and the seizure of illegal firearms and narcotics. Gagnon is now a member of the Community Support Unit.

Gagnon was selected as the Exchange Club Police Officer of the Year in 2016, and throughout his career has thus far received eight Unit Citations, eight Departmental Citations, two Merit Citations, and a Lifesaving Award.

Gagnon and his wife, Danielle, have a daughter, Riley, and a son, Zachary, who attended the ceremony and pinned him with his new detective badge. Gagnon’s parents, Jerry and Joanne, also attended.

Christopher Leonard, who has been promoted from officer to sergeant, is a lifelong Connecticut resident who grew up in Tolland and graduated from UConn with a degree in political science.

He was hired by the West Hartford Police Department in September 2012, and after graduating from the Police Academy in Meriden – where he was selected to give the commencement speech – served with the Patrol Division from July 2013 through January 2019.

Leonard joined the Emergency Services Unit (ESU) in 2016, and is cross-trained as an entry operator and an explosive breacher and handler. He has also attended the Capitol Region SWAT School and is certified by the Department of Corrections as a ballistic shield operator.

As a field training officer since 2017, Leonard has taught incoming recruits in West Hartford and at the Police Academy. He is also a member of the Honor Guard, a certified Police Mountain Bike Officer, LOCKUP Ground Fighting Instructor, and certified as a Crisis Intervention Team officer, “to help better respond to calls involving persons having a mental health crisis,” Coppinger said.

Leonard has been a member of the Community Support Unit (CSU) since January 2019, a unit focused on investigating vice, narcotics, and violent crimes. He was also a member of the Auto Theft Task Force, and has received four Unit Citations and two Departmental Citations during his career.

Leonard and his wife, Melissa, are expecting their first child.

He was pinned with his sergeant’s badge by his wife, and also in attendance at the ceremony were his father, James (a retired East Hartford Police sergeant), his mother, Leigh, his sister, Kara, his father-in-law, Steve, mother-in-law, Rosemary, and sister-in-law Angela.

Brett Balisciano has been promoted from sergeant to lieutenant.

A native of Hamden, Balisciano is a graduate of Hamden High School and Pace University in New York, where he earned a degree in criminal justice.

He ran his own painting business, “until he fulfilled one of his childhood dreams and was hired by the West Hartford Police Department on Aug. 6, 2000,” Coppinger said.

As a field training officer for 15 years, Balisciano has trained many new members, including the most recent graduates of the Police Academy. He has also taught practical skills and firearms training in departments across the state.

He was honored with the MADD Award in 2005, and nominated as Officer of the Year in 2009, and has received 19 Departmental Awards and several letters of commendation.

Balisciano was pinned with his lieutenant badge by his wife, Amy, and daughters Kayla and Ayva. His parents, Debbie and Frank, also attended the ceremony.

Joseph Creaco, who joined the West Hartford Police Department on Dec. 12, 2004, from the Derby (CT) Police Department, is from Brewster, NY, and a graduate of Western Connecticut State University with a degree in business marketing.

He became a field training officer in 2006, and in March 2007 was selected as a member of the department’s Community Interaction Team (CIT) tasked with investigating vice, narcotics, and violent crime.

Creaco also served with the Emergency Services Unit (ESU) for 10 years, retiring from ESU as a team leader, and was an integral part of the SWAT Challenge, designing courses and building some of the equipment along with Lt. Brett Balisciano.

Creaco was promoted to sergeant in 2012, and supervised field training officers and the Community Services Unit (CSU).

He was promoted to lieutenant in October 2017. an served in the Patrol Division and, since July 2019, as Traffic Division commander, responsible for the town’s special events, traffic control, accident reconstruction, grant writing, and the department fleet and maintenance, Coppinger said.

Creaco also supervised the Auto Theft Task Force which was created by Chief Vernon Riddick in January 2020 to coat a rash of overnight car burglaries and stolen cars. “This unit accounted for recovering over 10 stolen motor vehicles, making multiple arrests, and seizing three stolen handguns. Two of those handguns were used in shootings in Hartford,” said Coppinger.

Creaco has been the recipient of two MADD awards, 18 Departmental Awards, and was Officer of the Year in 2010.

He was pinned with his captain’s badge by his sons, Marco and Joey. His wife, Jessica, and parents, Marie and John, also attended the ceremony.