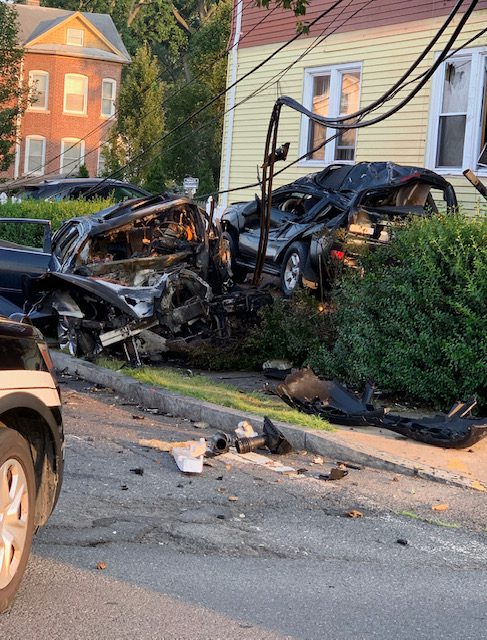 The driver of an Infiniti fleeing police crashed into a parked car before hitting a home and bursting into flames Tuesday at the intersection of New Park Avenue and Darcy Street in West Hartford. Courtesy of West Hartford Police (we-ha.com file photo) 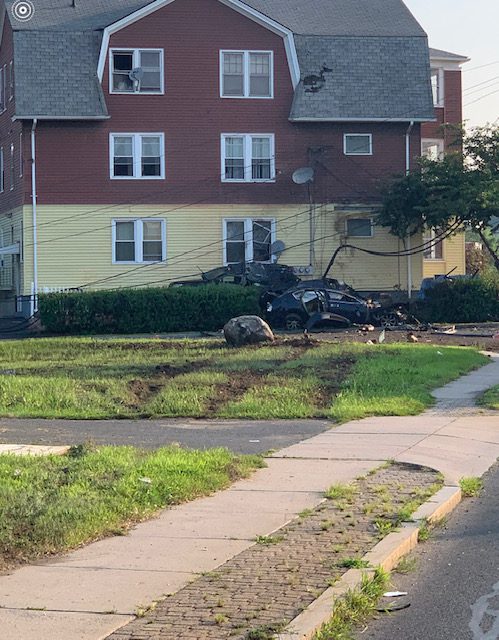 The driver of an Infiniti fleeing police crashed into a parked car before hitting a home and bursting into flames Tuesday at the intersection of New Park Avenue and Darcy Street in West Hartford. Courtesy of West Hartford Police (we-ha.com file photo)

An incident last Tuesday that began with a vehicle being pursued by Hartford Police in connection with shots fired ended on New Park Avenue at Darcy Street in West Hartford, near the intersection of New Park and Flatbush avenues, sent three suspects to the hospital, resulted in the evacuation of a multi-family residence, and snarled traffic as the West Hartford Fire Department responded to the scene along with West Hartford Police who are continuing to investigate.

According to West Hartford Police Capt. Eric Rocheleau, the vehicle – a dark-colored Infiniti – was traveling at a high rate of speed when the driver lost control on New Park Avenue, in the area of Jefferson Avenue, near New Park Brewing.

“The vehicle left the roadway, struck some large rocks in a parking lot, and went airborne,” Rocheleau said in a press release.

The vehicle then took down telephone wires and collided with a utility pole and a vehicle parked on Darcy Street before crashing into a multifamily residence at 475 New Park Avenue (corner of Darcy Street) and bursting into flames.

Police have now released the names of the three individuals who were inside the vehicle. All three were initially transported to an area hospital with injuries resulting from the crash.

Online records do not show any convictions for Ortiz or Hunter, but both are currently scheduled for court appearances related to a slew of other incidents for which they have been released on bond. Ortiz faces multiple larceny charges, interfering with officer, evading responsibility and motor vehicle-related charges. Hunter is out on bond for an incident that includes weapons charges, larceny, and motor vehicle-related charges.

West Hartford Police did not provide any information about whether or not the three men remain in the hospital or have been charged with any crimes in connection with this incident.

Lt. Aaron Boisvert of the Hartford Police Department told We-Ha.com that he does not have information about whether the three individuals are still hospitalized. He confirmed that the investigation by Hartford Police remains ongoing.

West Hartford Police also said they are continuing their investigation.