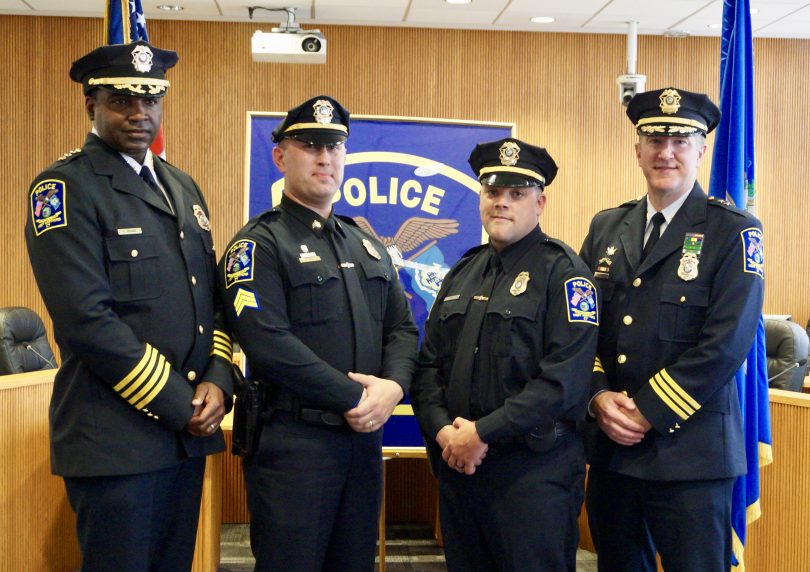 Two members of the West Hartford Police Department were honored in a ceremony Wednesday. 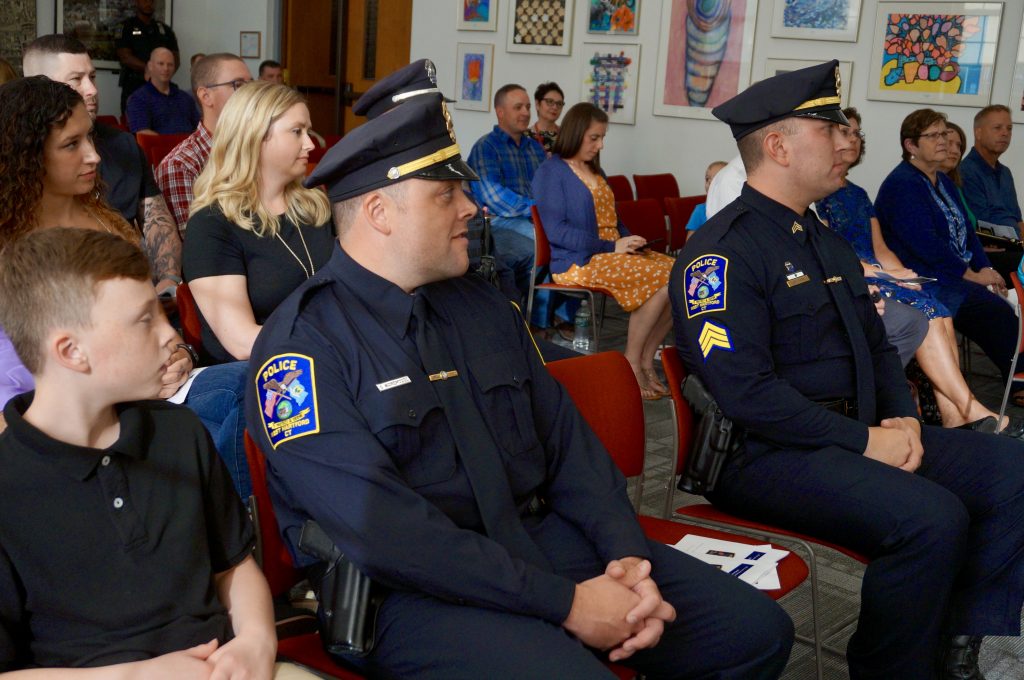 Riddick said that when the command staff realized they had scheduled the promotion ceremony for Sept. 11, they questioned whether it should be changed. He said of course they should have it, and added, “What better way to honor those who made the ultimate sacrifice?”

Before Mayor Shari Cantor administered the oath of office, Coppinger spoke about the background of each man. 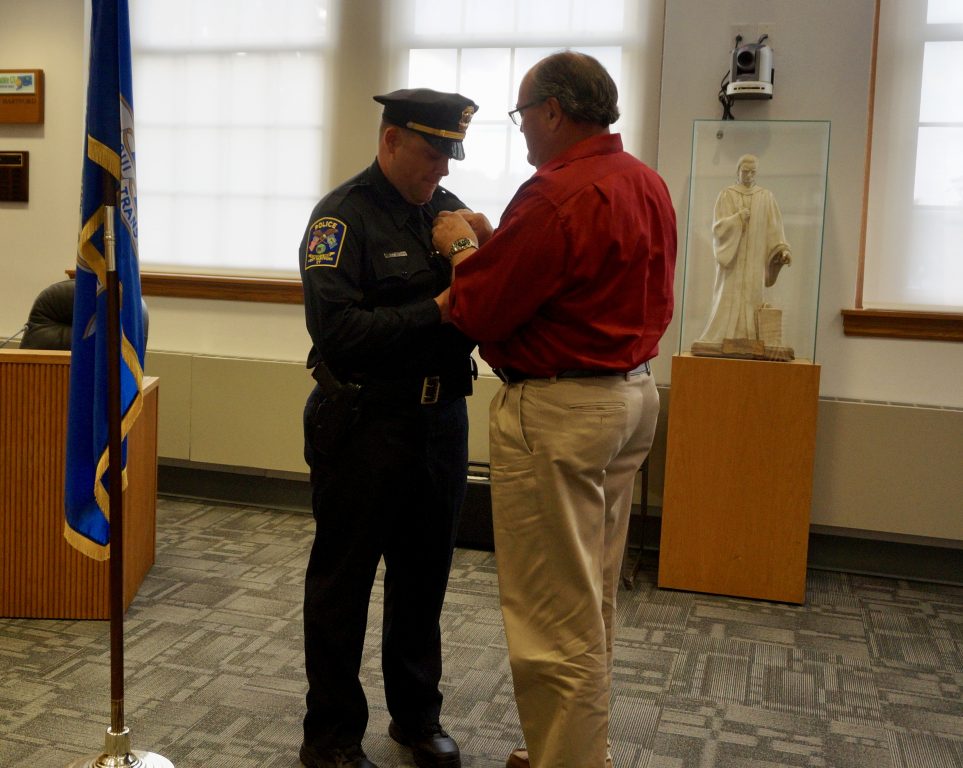 Being promoted on 9-11 was particularly appropriate for Morehouse, a native of Manchester, CT, because it was on Sept. 11, 2011, when he was a student at Eastern Connecticut State University majoring in sociology and criminal justice, that he decided to definitely pursue a career in law enforcement.

“Seeing the heroic men and women of the NYPD, FDNY, and the Port Authority Police Department running towards the Twin Towers as everyone else was running away, Steven immediately knew what he wanted to do,” Coppinger said.

His hiring date by the West Hartford Police Department: Sept. 11, 2005.

Morehouse has worked in the Patrol Division, as the department’s court liaison officer, and in June 2011 was given a temporary assignment to the Traffic Division.

“Unsure if he would like this assignment, Steven found his true calling,” Coppinger said. “Steven found that he loved traffic enforcement, and more importantly, investigating traffic accidents.”

After completing his temporary assignment, Morehouse returned to Patrol but eventually returned full time to the Traffic Division, where he served until March 2018 and completed specialized training courses including “Accident Reconstruction.” He also attended training at the Henry Lee Institute of Forensic Science at the University of New Haven where he learned how to use the Total Station Digital Mapping System.

Morehouse has been the lead investigator on numerous fatal and serious motor vehicle crashes in West Hartford, Coppinger said.

Morehouse returned to the Patrol Division as a senior patrolman in March 2018. “And now today, Sept. 11, Steven finds himself not only remembering this day for our country, but also as a milestone in his career once again.”

Morehouse lives in Coventry, and his wife, Lauren, and children Damon, Elliana, and Myles, attended the ceremony along with his parents, brother, sister, and other family members.

Morehouse’s father, Blair, pinned him with his detective badge. 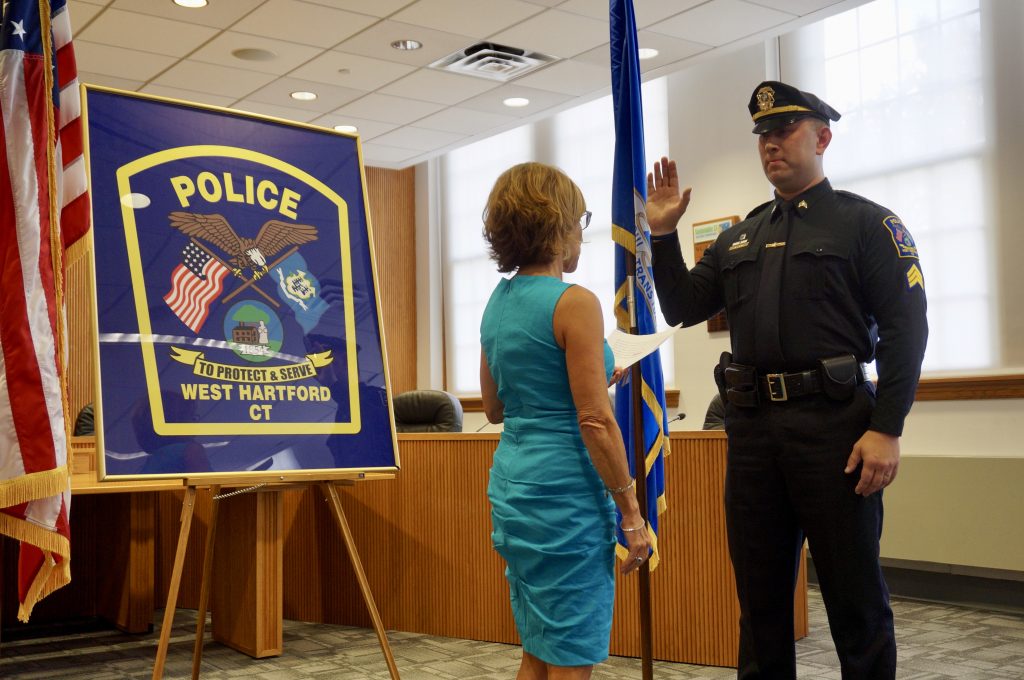 “Matt’s first service jobs began in high school and were unique,” Coppinger said. “He worked as a grave digger and a wedding DJ.”

LaRiviere enrolled in the chemical engineering program at UMass Amherst in 2006, but he “always felt the calling to serve,” Coppinger said, and changed his major to sociology with the goal of a career in law enforcement.

While still a student in 2008, LaRiviere was hired by the UMass Amherst Police Department as a cadet police officer. He attended the Massachusetts Reserve Police Academy, and was promoted to the rank of cadet police officer II, which solidified his career goals.

After graduation in 2010 he pursued law enforcement positions throughout New England. He was hired by the West Hartford Police in October 2010 and served in the Patrol Division after completing the Connecticut Police Academy in Meriden, remaining there through 2018.

LaRiviere became a Field Training officer, a member of the Honor Guard and Peer Support Team, and received five Departmental Unit Citations and one Lifesaving Award.

He has received specialized training in multiple areas, including combat lifesaving and mental health resiliency for law enforcement.

After joining the Traffic Division for a longterm assignment in 2018, he also received advanced training in accident investigation. He recently completed training as a police instructor, and will be teaching courses on peer support and human trafficking.

“Last month, Matt represented Connecticut as one of four criminal justice professionals, and spoke at the 45th Annual International Traffic Records Forum, which was held in Austin, TX,” Coppinger said.

LaRiviere and his wife, Jennifer, live in Woodstock. Many members of his family, and many friends, came from Massachusetts to attend Wednesday’s ceremony.

He was pinned with his sergeant badge by his longtime friend and fellow UMass Amherst Police cadet alum, Off. Keith Norris from the Freeport (Maine) Police Department.

Riddick said that in the past 15 months since he became chief, about a dozen members of the department have been promoted. 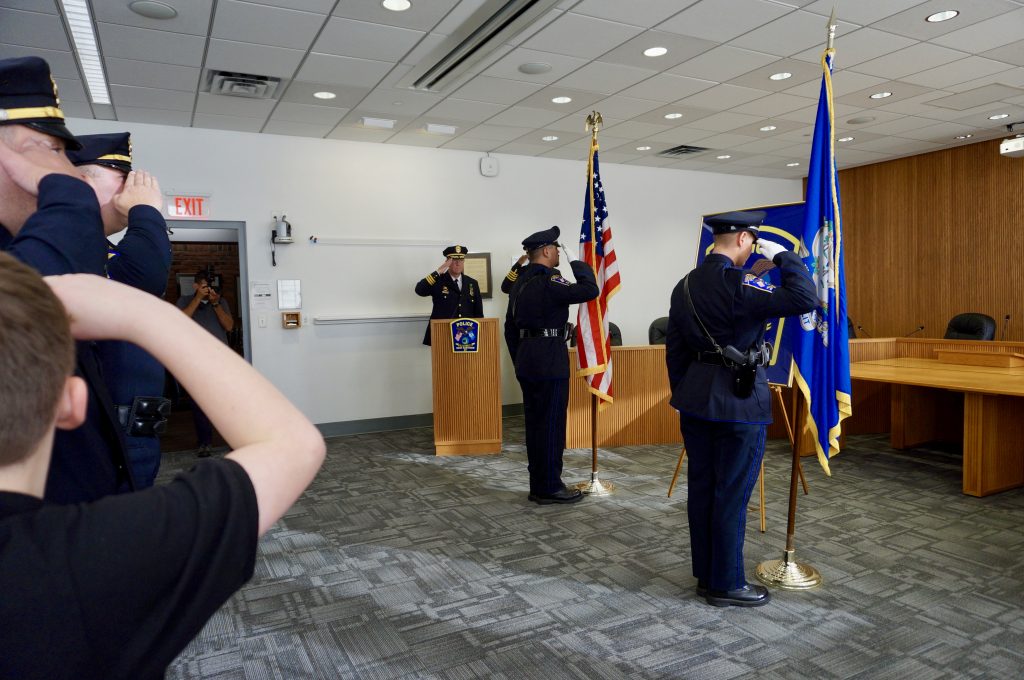 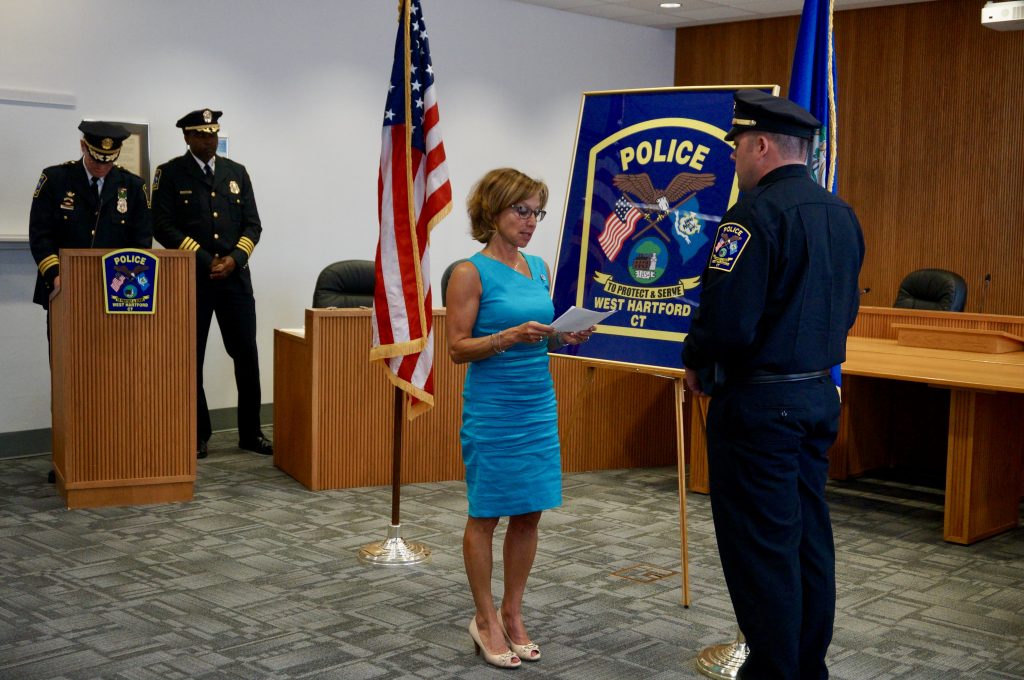 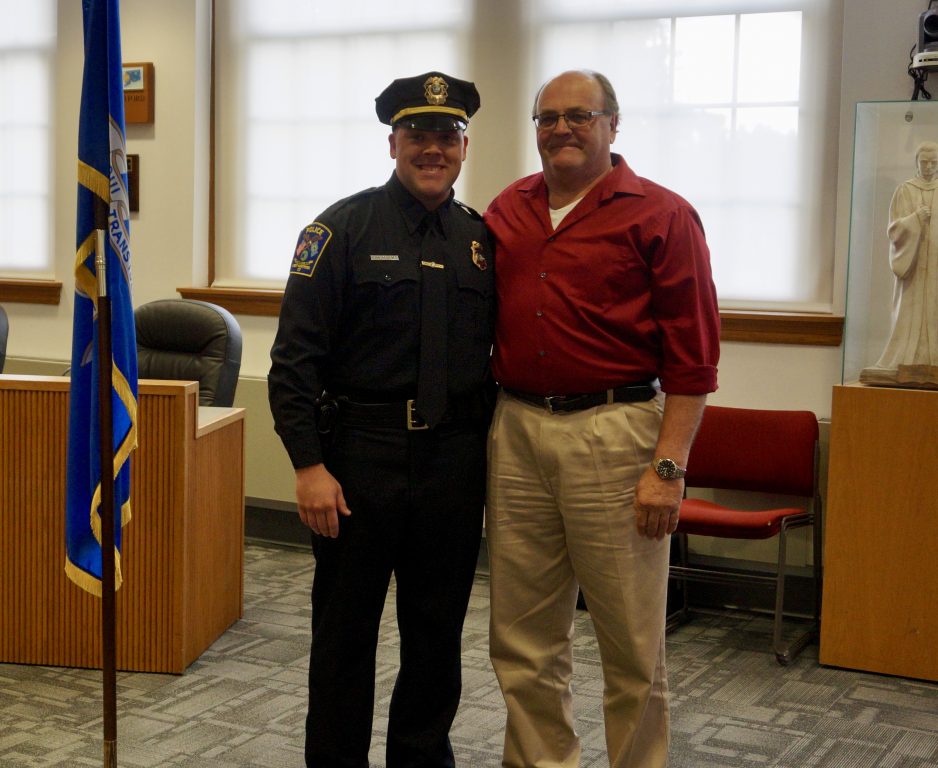 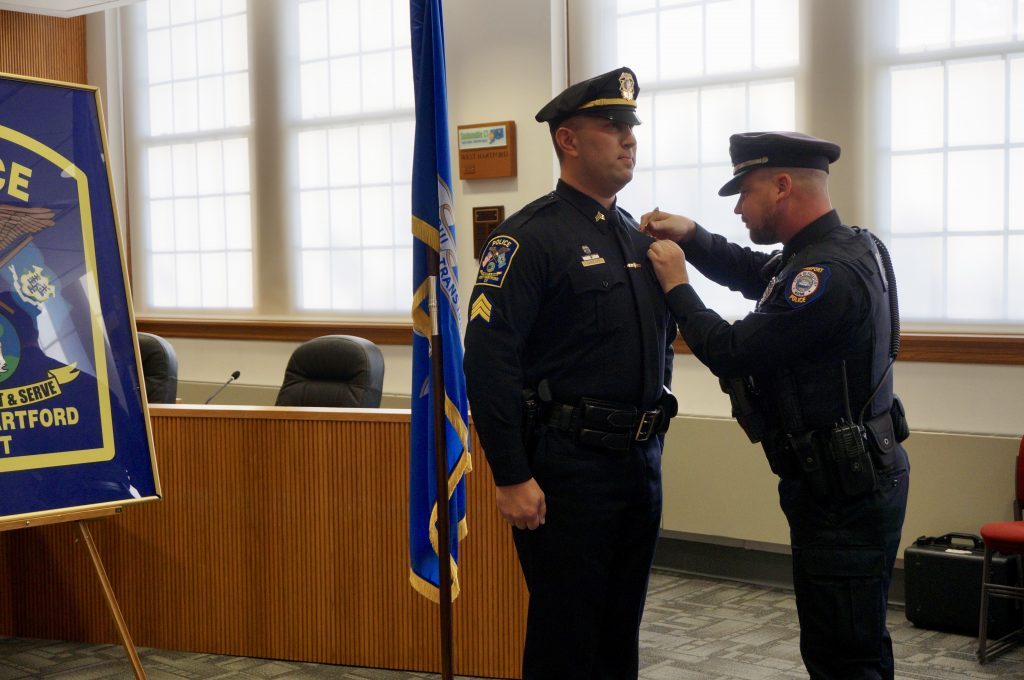 Sgt. Matthew LaRiveire is pinned by his longtime friend, Off. Keith Morris of the Freeport, ME, police department. Photo credit: Ronni Newton 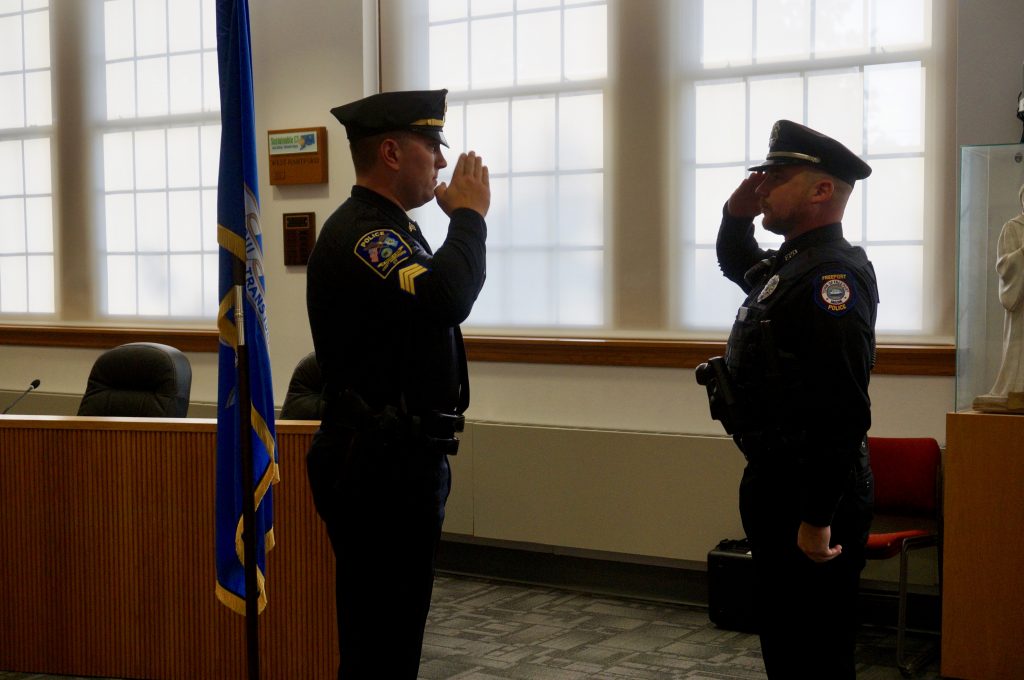 Sgt. Matthew LaRiveire (left) and his friend, Off. Keith Morris of the Freeport, ME, police department, salute each other after Norris pinned LaRiviere with his sergeant’s badge. Photo credit: Ronni Newton 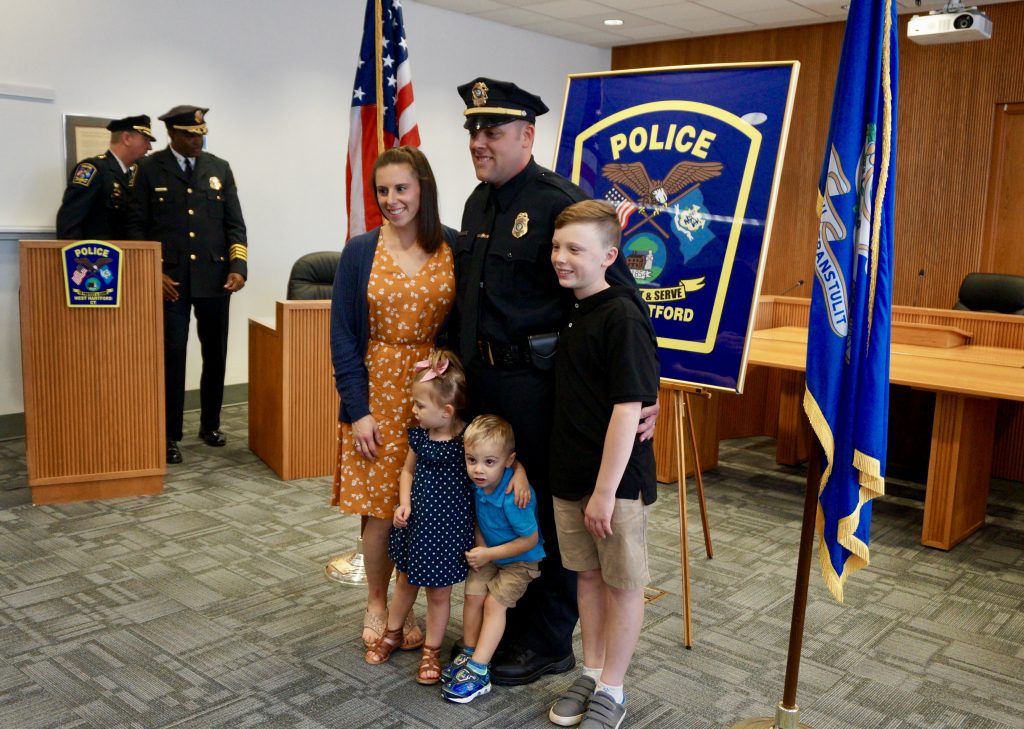