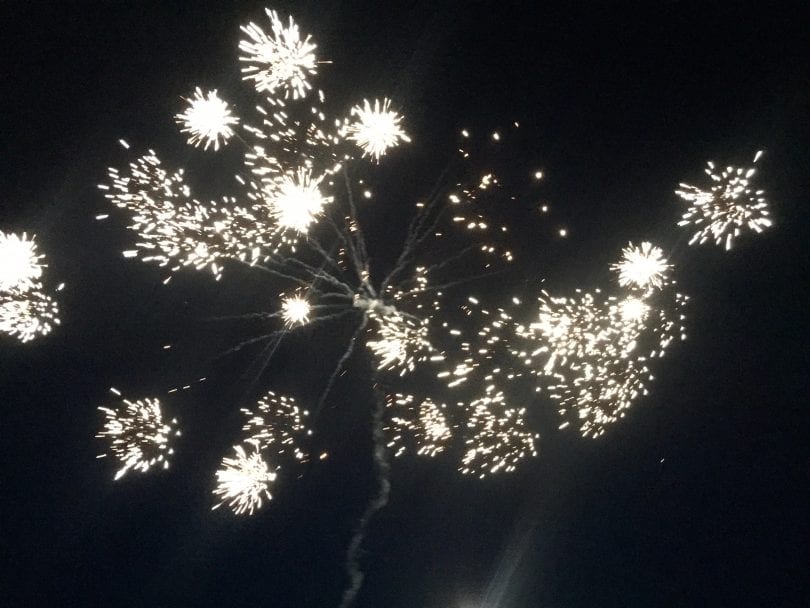 West Hartford Police say there has been a tremendous increase in fireworks activity this year.

It’s illegal for individuals to set off fireworks in Connecticut, but that hasn’t stopped the nightly occurrences – sparks which have in turned sparked many calls to West Hartford Police.

Police received 17 calls last Saturday night alone, but many more people have taken to Facebook and other social media platforms to sound off about the the booming at all hours – including until 4 a.m. on a recent day – that’s keeping children awake and terrifying pets, dogs in particular.

“All fireworks are illegal in the State of Connecticut, with the exception of sparklers and fountains,” West Hartford Assistant Police Chief Dan Coppinger said. That includes Roman candles, bottle rockets, and even firecrackers. He said those items, as well as mortars, have been determined to have been the source of the recent complaints.

People ages 16 and up are permitted to use sparklers or fountains, which are sold in local grocery stores and big box stores. Anything else is being sold, or used, illegally.

Coppinger said while it’s not unusual for people to be shooting off fireworks at this time of year – including illegal fireworks – there has been a tremendous increase in use and resulting calls to police this year.

West Hartford Assistant Fire Chief Mike Sinsigalli, who is also the fire marshal, said he and Coppinger have been addressing the issue along with Detective Paul Makuc from the State Police Fire and Explosion Investigation Unit. “The general feeling is that, because of the professional fireworks displays being canceled due to COVID and the increase of the number of people staying home during the summer holidays, we will more than likely see an increase in the use of fireworks, the number of complaints, and unfortunately, the number of fires and injuries.”

Of the calls police received regarding fireworks last weekend, one was determined to have been a carpenter using a nail gun. The rest appear to have been fireworks, Coppinger said.

West Hartford Police determined that most of the calls they received last weekend were regarding fireworks being shot off in Hartford, where Mayor Luke Bronin on Wednesday announced that a special hotline has been set up for residents to call (860-757-0000) or text (860-294-8233) and report Hartford-based incidents.

Other nearby communities have also been receiving reports of nightly fireworks.

West Hartford Police have been investigating and attempting to locate the sources of the fireworks incidents that are within town, Coppinger said, using vehicle as well as bike patrols. “We will move into the area, shut off the police vehicle and look and listen for the source of the fireworks,” he said, and officers on bike also quietly ride through neighborhoods searching for the sources.

Thus far, no one has been caught, Coppinger said. “Officers did give a verbal warning to one residence that had a loud outdoor party but there was no evidence to indicate fireworks had been used.”

Anyone caught in the act will be charged, he said. “Anyone using, possessing, or selling illegal fireworks may be arrested for a Class D Misdemeanor and a mandatory court appearance.”

Sinsigalli said that people are legally responsible for damages and injuries that result from the use of fireworks, even if the fireworks are “legal” in Connecticut.

There have not been any fireworks-related injuries in West Hartford at this time, Coppinger said.

However, elsewhere in the state a young girl received severe burns to her face due to fireworks, Sinsigalli said.

“Fireworks may be fun if used properly and legally,” said Coppinger. “These are the fireworks that may be purchased in Connecticut stores. However, residents also need to respect their neighbors,” he said.

“Besides being dangerous explosives and a fire hazard, loud noise created by illegal fireworks can often frighten people as well as interrupt neighbors trying to sleep. If you are using legal fireworks, be considerate to your surrounding neighbors.”

Coppinger said that West Hartford police are out and will continue to be looking every night for the source of illegal fireworks. “Individuals found to be in possession or are seen using illegal fireworks are subject to arrest.”

“Fireworks are prohibited in Connecticut because they are dangerous,” Sinsigalli said. “Nationwide in 2018 (the latest year that we have statistics for), fireworks accounted for 19,500 fires with a total loss of more than $105 million. Hospitals treated 9,100 injuries, and one-third of those injuries were to children under the age of 15 years old.”

“Please leave fireworks displays to licensed professionals using regulated products while following fire safety regulations,” the Town of West Hartford said in a public safety announcement issued Thursday. “House fires, grass fires, injuries, and even death can be attributed to the misuse and handing of fireworks – especially those that are not governed.”

Reports of fireworks should be made to the West Hartford Police non-emergency line, 860-523-5203.

The town also noted that manufacturer’s instructions should be followed when using sparklers, which can also cause injury or damage if used improperly:

Sinsigalli also provided the following links for those who would like more information about fireworks: