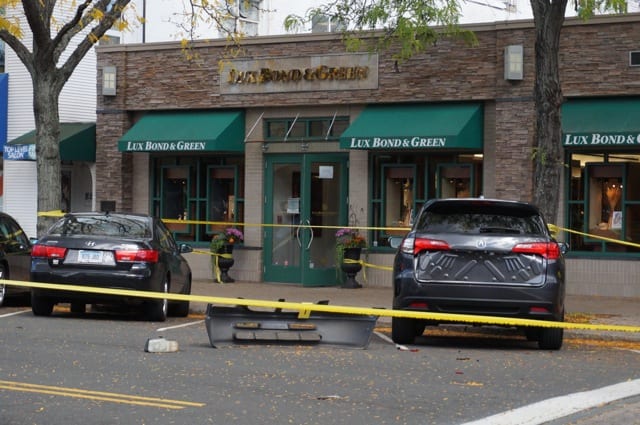 Updated 3:30 p.m.: Police continue to investigate a ‘smash and grab’ robbery at Lux Bond & Green on LaSalle Road in West Hartford that occurred shortly after noon on Wednesday. 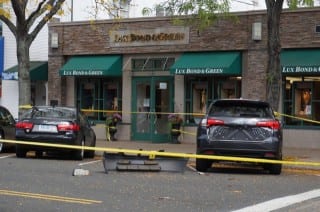 Suspects are still at large and police are still investigating the scene of a “smash and grab” robbery that occurred at Lux Bond & Green at 46 LaSalle Rd. in West Hartford Center at 12:17 p.m. on Wednesday.

According to Lt. Ted Stoneburner of the West Hartford Police, there were “no weapons shown” during the robbery.

The suspects smashed jewelry cases in the store and escaped with merchandise, but details about the type of goods stolen and the value have not yet been released by police.

West Hartford Police Detective Sgt. Sam Ferrucci, who is investigating the crime, said that there were no injuries.

The suspects fled the scene in an older model grayish-blue Dodge Caravan with Massachusetts plates, and during the getaway collided with three vehicles, including at least one vehicle parked on LaSalle Road. The Caravan was abandoned a few blocks away on Ellsworth Road, just west of Woodrow Street. Police said that according to witnesses the suspects are believed to have gotten into two other vehicles that had been parked there.

According to WWLP 22News, the Caravan had been stolen from a Home Depot parking lot in Chicopee, MA, at approximately 10:15 a.m. Wednesday morning. 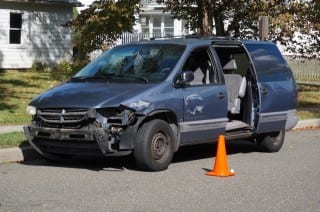 Suspects in the “smash and grab” robbery at Lux Bond & Green Wednesday were believed to have fled in this Dodge Caravan and then switched to another getaway vehicle on Ellsworth Road. Photo credit: Ronni Newton

Conard High School on Beechwood Road was placed in lockdown at approximately 12:30 p.m. Wednesday afternoon due to information from police that a stolen car was in the area. Lt. Stoneburner said that the police “don’t know where they went” but reports were that they might be in the Conard area and that led to the lockdown. The lockdown was lifted and Conard students were dismissed on time at 12:48 p.m.

Details are still being sorted out and the crime scene is still active, but according to Stoneburner there were “more than a few” suspects. Descriptions have not yet been released.

This is the second major robbery at Lux Bond & Green in the past five years. According to NBC Connecticut, more than a half million dollars worth of watches were stolen in June 2010. The suspect in that case, Shamell Rijfkoge, was arrested in 2012.

Check back with We-Ha.com for more details as this case develops.