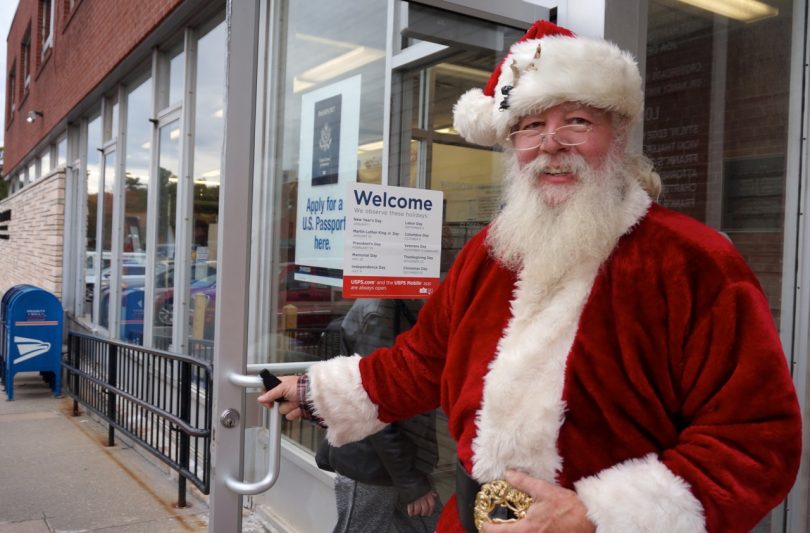 Santa Claus visited West Hartford’s Bishops Corner Post Office on Monday, to stock up on some of this year’s special Christmas stamps. 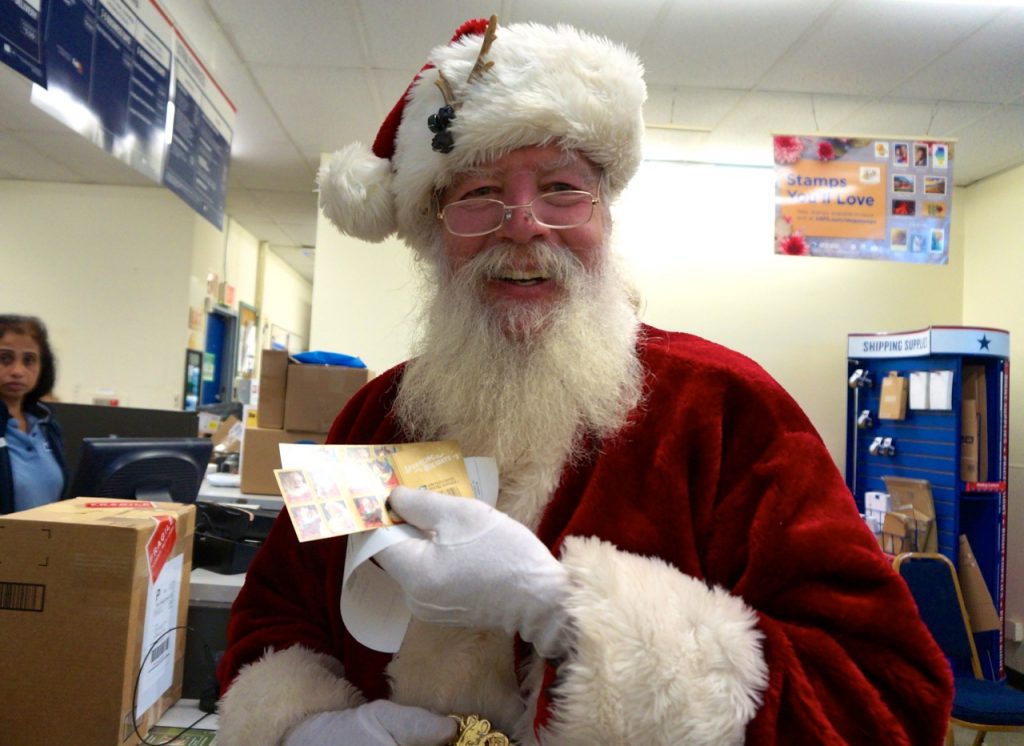 It was definitely a “what, to my wondering eyes should appear …” moment.

Eyes opened wide and eyebrows arched in an expression of disbelief on the faces of adults in front of and inside the Bishops Corner Post Office at they watched Santa Claus – in his full Christmas attire – stride through the door Monday afternoon and take his place in line.

“I have to support alternate forms of delivery,” said Santa, ending his sentence with a “Ho, ho, ho” as he grabbed the gold buckle of the belt that encircled his red coat and shook his belly. 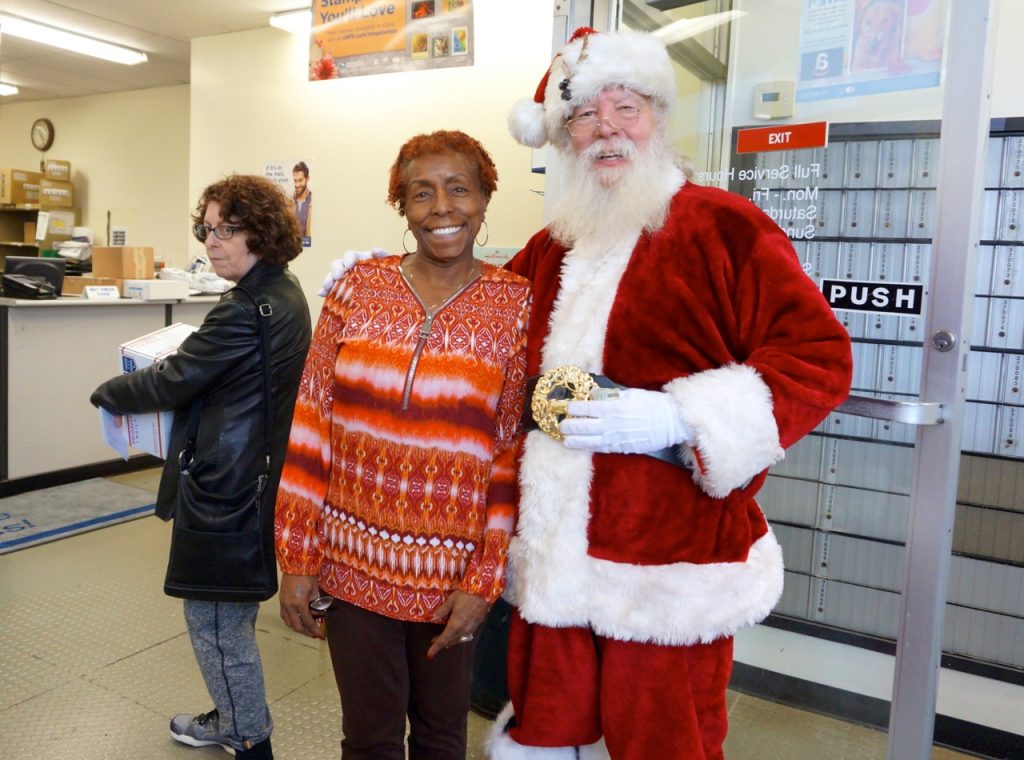 Santa, aka “Santa Chip,” is a West Hartford resident with white hair and a white beard, who for years has been an official Santa’s helper. His usual assignment is at Cabela’s in East Hartford, and he also appears at private events.

He posed with an employee, and joked with the clerk who did her best to keep a straight face.

Santa said he was inspired to visit the Bishops Corner Post Office to stock up on a supply of the new “Sparkling Holidays” stamps. According to the U.S. Postal Service website: “The U.S. Postal Service celebrates Christmas with four stamps featuring classic images of Santa Claus painted by famed commercial artist Haddon Sundblom. Each stamp portrays a close-up of Santa’s face; the four images are details from larger paintings created by Sundblom and originally published in ads for The Coca-Cola Company from the 1940s through the early 1960s.”

“Sundblom is the man credited with refining the modern image of Santa Claus,” Santa Chip said, holding up the stamps to prove the uncanny resemblance.

As Santa climbed into his van – his preferred form of transportation at this time of year – he drew more stares from people in the parking lot.

“That made my day,” said one woman.

Although Santa reportedly keeps track of how well children behave all year round, the job is still rather seasonal in nature, so Santa Chip keeps busy during the warm weather making appearances as a “pirate ship captain.”

Due to the huge influx of mail to the North Pole as Christmas approaches, the best way to get in touch with Santa Chip is probably through his website. 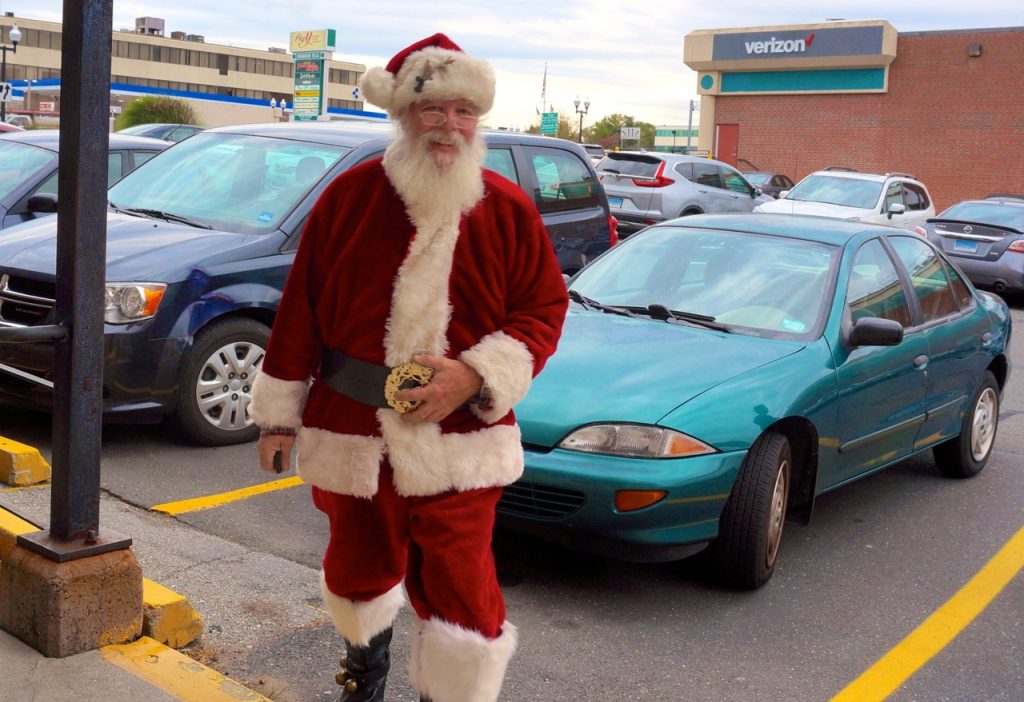 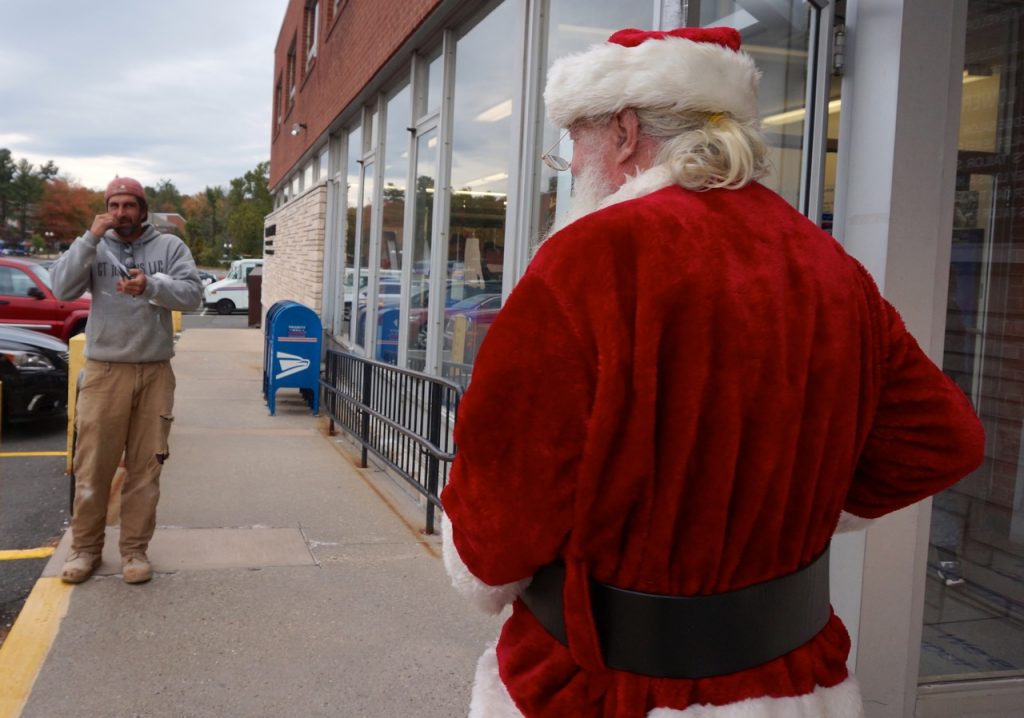 A man in the parking lot doesn’t quite know what to think as Santa holds open the door to the Bishops Corner Post Office. Photo credit: Ronni Newton 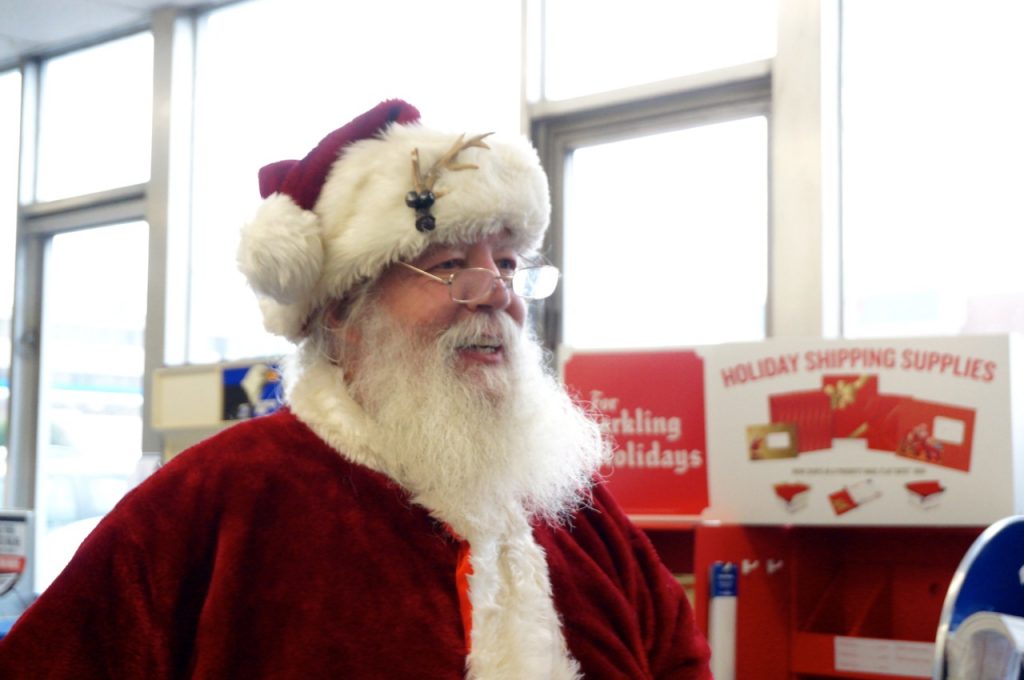 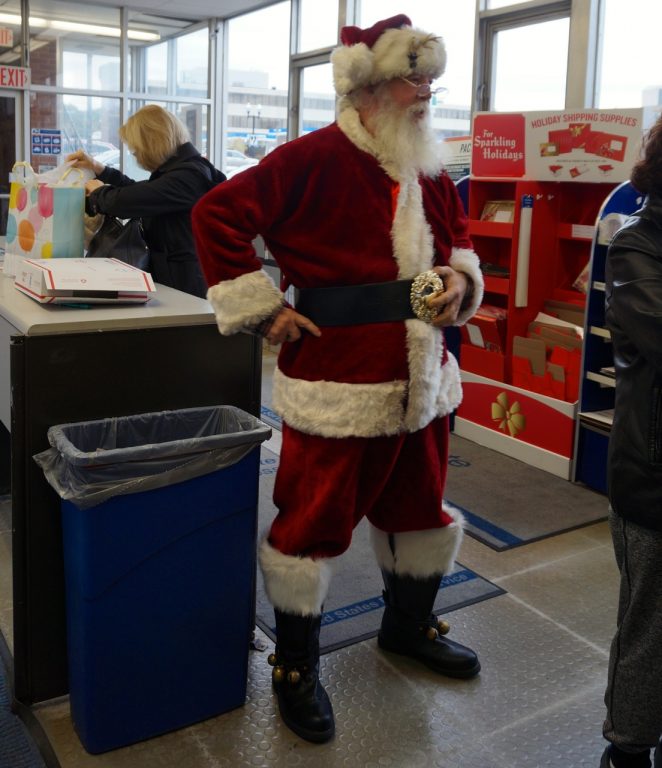 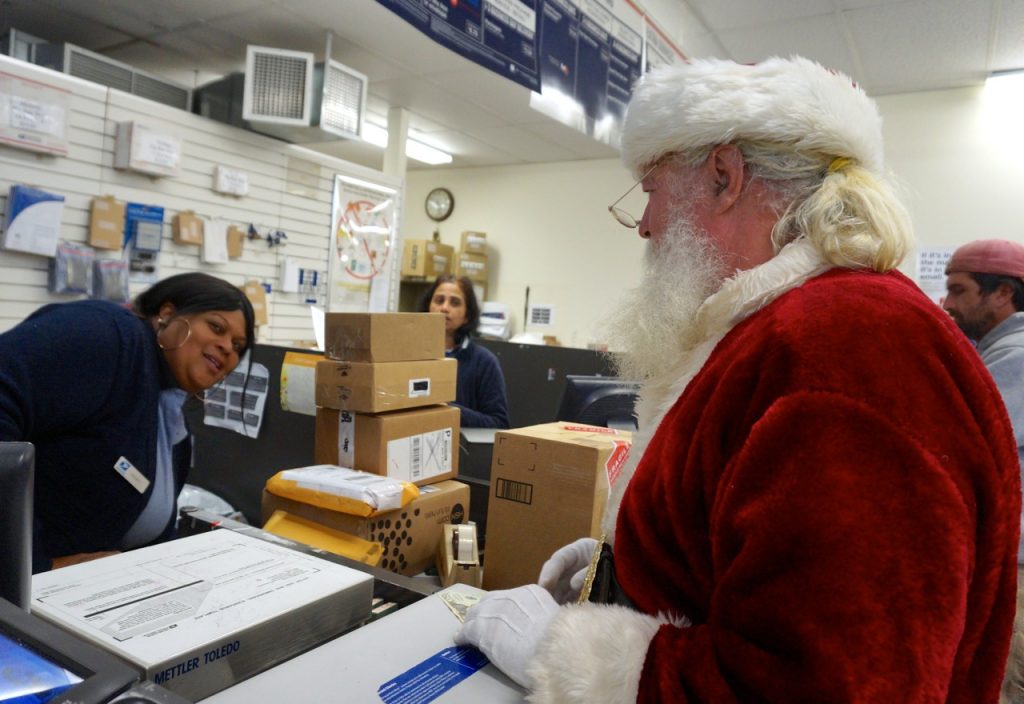 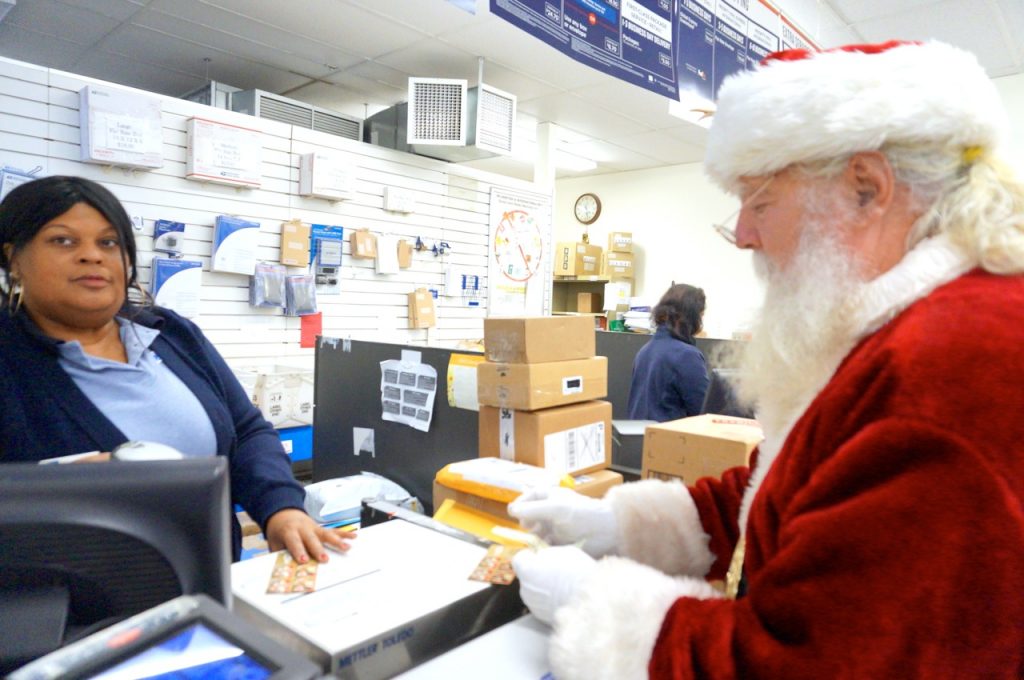