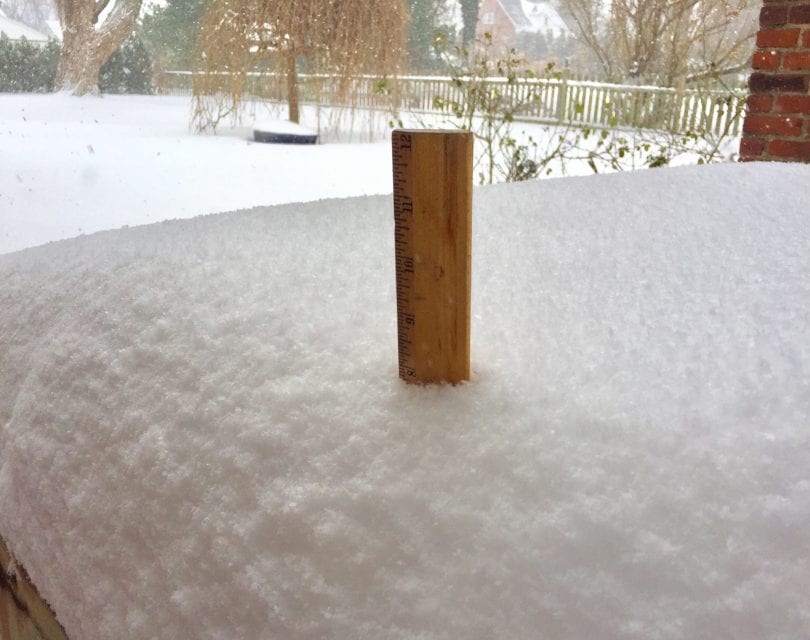 West Hartford Public Schools will be closed on Friday, Jan. 5, Assistant Superintendent Andy Morrow announced at 7:45 p.m. All offices will open with a two-hour delay.

As the year’s first snowstorm began to wind down Thursday evening, Director of Public Works John Phillips said that roads in West Hartford were beginning to improve.

“I’m very proud of my team,” Phillips said. “They did a very good job. They stayed ahead of the storm all day long.”

“We don’t expect any more major accumulation,” said Phillips, so crews would soon begin the final clean-up which also involves going back over already-plowed roads to ensure they are cleared curb-to-curb.

Total snowfall in West Hartford was in the 9-10 inch range, Phillips said.

There were no problems in town with downed trees, and other than a flickering of power just before 6 p.m., no outages as of yet.

“We know people have cleared their driveways, and have nice clean sidewalks,” said Phillips. Plows don’t purposely spray those areas with snow, but it’s unavoidable, he said. “An unfortunate consequence.”

Thanks to light traffic, there was not the build-up of snow pack on West Hartford’s roads that Phillips had feared earlier. “The guys have been scraping, scraping,” he said, but problems could still be caused by the wind blowing and drifting snow back onto cleared roads.

Other than the impact of the wind, Phillips said he anticipated that roads would be “100 percent clear” by sunrise. If schools are delayed or closed, it won’t be due to the infrastructure, he said.

The cold – the coldest temperatures we’ve had in about 20 years – could be a factor with school opening, he said.

Phillips reiterated that Christmas trees should not be left at the edge of the roadway or they will get plowed in and then won’t be able to be picked up until spring.

The parking ban will be lifted as scheduled at 5 a.m. Friday. At that time all vehicles parked in schools need to be moved.

“Don’t park somewhere unsafe,” Phillips warned. Some parking spaces may not be fully cleared right away.

The berms created in West Hartford Center will be removed late Friday night, after crews have had a chance to rest, Phillips said.

The Town of West Hartford has closed non-essential offices as of noon.

Anyone in need of assistance should contact West Hartford Police on the non-emergency line at 860-523-5203. In case of emergency, dial 9-1-1.

Snow began falling in West Hartford before dawn on Thursday, and by late morning the wind was howling and anywhere from 3.5 to 4 inches of snow had fallen throughout town.

“It’s tough to measure because of the wind,” Director of Public Works (DPW) John Phillips said in a phone interview at 10:15 a.m. He said that snowfall rates have picked up to a rate of 1-2 inches per hour.

Phillips said that DPW has 26 plows out on the roads this morning, but due to the snowfall rate he has called in 12 contractors to assist. “At that rate we won’t be able to keep up,” Phillips said.

“Kudos to every resident for respecting the storm and staying off the roads. We’re not seeing heavy traffic anywhere,” Phillips said. West Hartford Center is virtually empty. “Even Starbucks is closed,” he said.

Compliance with the parking ban was very good, said Phillips. Those vehicles that did not were taken care of quickly by police.

Many other businesses have posted on social media that they are closed on Thursday, and calling ahead is suggested if it’s absolutely necessary to go somewhere. Westfarms was open as of 10 a.m., but most stores other than Macy’s and Dunkin’ Donuts were closed according to reports.

The roads are “passable but drivers should expect unpredictable and changing conditions,” said Phillips. If you have to go out – for example to pick up a prescription – Phillips said the roads could be okay on the way to the pharmacy but not on the way home.

Freezing windshields will be another problem, Phillips said.

Paine’s was picking up trash and recycling early on Thursday morning, but Phillips wasn’t sure they would be able to complete all routes. He said he would provide an update as soon as possible.

Phillips asked anyone who put their Christmas tree at the curb to please pull it back in if it hasn’t been picked up because once it gets covered by the snow from the plow it will be nearly impossible to move.

“We worked as best as we could to pick up as many as possible earlier this week. I put all my resources out,” Phillips said, but there are still trees at the curb that may end up stuck there for quite some time if they get plowed in.

No issues with power outages or fallen trees had been reported yet, said Phillips.

The storm should wind down by dinnertime, and road conditions will improve later tonight, Phillips said.

Assistant Superintendent for Administration Andy Morrow made the call Wednesday night that many students – as well as teachers – were hoping for, announcing at 7 p.m. that schools as well as offices would be closed on Thursday, Jan. 4, due to a snowstorm that is forecasted to begin before dawn.

In advance of the storm, Director of Public Works John Phillips announced Wednesday afternoon that a parking ban will go into effect at midnight and will last through 5 a.m. on Friday, Jan. 5.

On-street parking is prohibited to allow Public Works crews to plow the roadways all the way to the curb. The West Hartford Police will be assisting with enforcement, and vehicles that fail to comply will be towed and owners will be fined.

During a parking ban, residents can use municipal lots, including those at schools and parks, but are asked to park next to each other to allow for more efficient clearing of those lots. However, Phillips also said that the 5 a.m. expiration of the parking ban will be enforced, and vehicles must be removed by that time to allow crews to plow the lots so schools can re-open on Friday. Those who co not comply will be towed.

Fees will still be in effect at all paid municipal lots and garages, Phillips said. Overnight parking in one of the garages will likely result in fees of about $14, but will keep a car from getting covered in snow.

During a parking ban, the West Hartford Police Department’s omit system is disabled.

Phillips said he subscribes to a service called “WeatherWorks,” and that service is predicting snowfall in West Hartford of 4-8 inches.

The National Weather Service has issued a winter storm warning from 1 a.m. Jan. 4 through 1 a.m. Jan. 5, with a prediction of 6-10 inches for the West Hartford area. Winds may gust as high as 37 mph, and Thursday night’s temperature is expected to fall to 5°F.

“This should be your standard, moderate snowstorm,” Phillips said of the volume of snow, but the impact of the winds, as well as the continued extremely cold temperatures, will be a significant factor.

Phillips said that the snow will be light, and with the wind drifting is likely, which will lead to deeply packed snow in some areas.

As for treating of the roadways, Phillips said that the extreme cold has an impact on the effectiveness of the material. It will still work, but not as well.

Even before any more snow falls, the pavement on many West Hartford roads already appears white, Phillips said, because of a “brine” left over from treatment for past storms. Nothing has washed it away yet. “The moisture content [of the new snow] will activate it,” Phillips said, and new application of salt and de-icing material will likely be concentrated on main roads that aren’t already “pre-brined.”

“The weather will be very unpredictable,” Phillips said, with travel conditions likely to change rapidly.

“We are concerned about snow pack developing,” Phillips said. Because of the extremely cold ground temperature, and daytime traffic, the snow on the roads could become hard-packed, and he said there really is no way to combat or prevent it. With the continued cold predicted, the snow pack could last for a long time, he said.

The Town of West Hartford is also reminding property owners that they are responsible for removing snow and ice from the sidewalk along their property line within 12 hours after the storm or sunrise, whichever is later, according to town ordinance. Sidewalks must be kept clear of snow and ice, and heavily used sidewalks near schools and public buildings, and the commercial areas are particularly important. To report a snow clearing violation, please call the West Hartford Police Department at 860-523-5203.

The town also asks residents to please keep the area around hydrants clear for the West Hartford Fire Department.