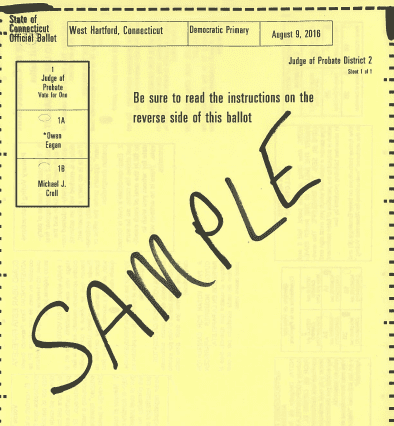 West Hartford Democrats will elect a candidate for probate judge on Tuesday, Aug. 9, 2016.

There has been plenty of chatter and publicity surrounding the 2016 presidential election, but signs that have sprouted around West Hartford for several probate judge candidates have some people confused about why there is an election on Aug. 9.

Owen Eagan is the candidate endorsed by the West Hartford Democratic Town Committee, and Michael Croll received enough signatures on a petition to force a primary, she said. The asterisk next to Eagan’s name on the ballot – a sample of which appears below – indicates that he is the endorsed candidate.

Sydney Elkin has served as West Hartford’s probate judge for about 14 years, but state statute requires him to retire when he turns 70, which is this October. The winner of Tuesday’s election will be on the Nov. 8 ballot in what is technically a special election to fill the vacancy being created by Elkin’s retirement. The remaining term runs through January 2019.

Because the Republican party did not nominate a candidate for the position, the Democrat who wins the Aug. 9 election will become the new probate judge, Labrot said. Although the candidates technically represent a political party, the job is non-partisan, she said.

All polling places will be open Tuesday, Aug. 9, from 6 a.m. through 8 p.m. Only registered Democrats are able to vote, but unaffiliated voters have until noon on Monday, Aug. 8 to come to the Registrar of Voter’s office (or by Aug. 4 if done through the mail) and affiliate with the Democratic party to vote in the primary. Note that this applies only to currently unaffiliated voters.

Absentee ballots for the Aug. 9 election are available through Monday in the Town Clerk’s office, and Labrot said the qualifications for voting by absentee ballot must be met. That information, as well as addresses of polling places and other details, can be found here on the Town of West Hartford’s website.